Wrapping Up the Forest Fire and Some Fun With a Guy

Wrapping up the Forest Fire

I had a real urge to go kayaking on the river today but there was a problem.

After taking care of the chickens I rode the dirt bike over to here where Sweetwater comes into Armstrong Road.

They were loading up equipment to take it out as it wasn’t needed. They still left some of it up by the fire for standby, just in case and will likely be there for a couple more days

They are loading up the dozer onto the trailer. 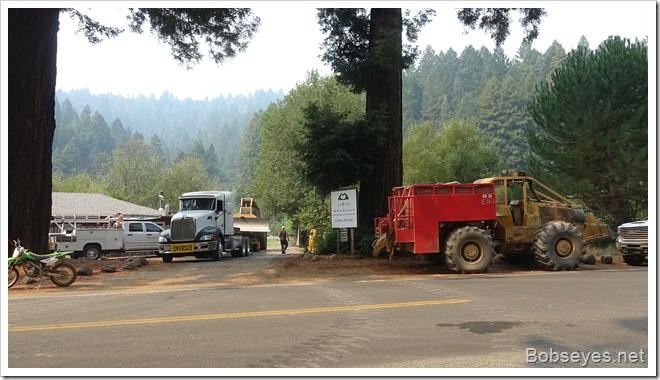 I was wondering about the roadblock to keep people out of this area which was about a half mile down this road. The water truck is loading up water at a hydrant. I stopped to chat with them. 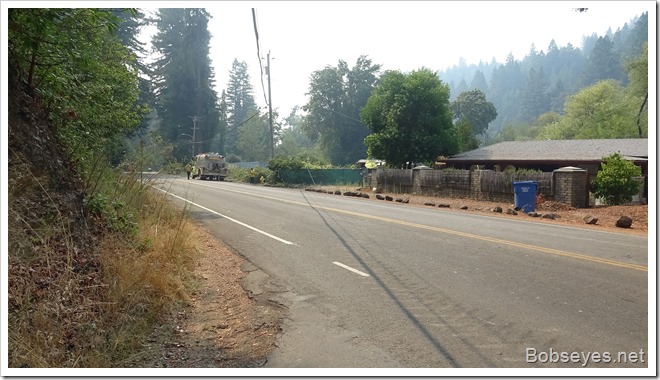 Then I continued on down the road to check with the roadblock guy. 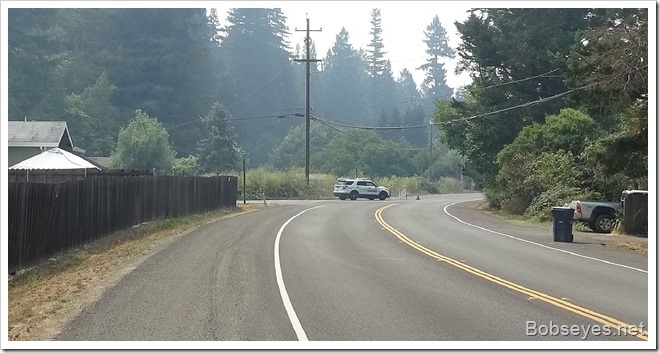 The cop was a real nice guy. He could of given me some trouble as I was on an unlicensed dirt bike with no license myself and no helmet but he didn’t mention it. I told him I really just wanted to go out to kayak but he was off in a couple hours and wasn’t sure I’d get back in.

Fire trucks coming on their shift

About that time these fire trucks rolled in to replace the crews that were there last night. 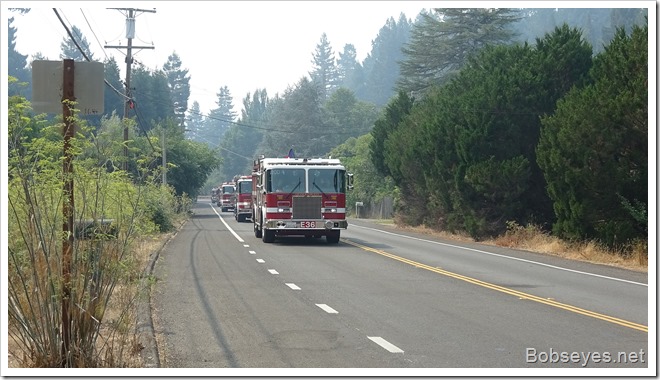 I rode on home past this spot. 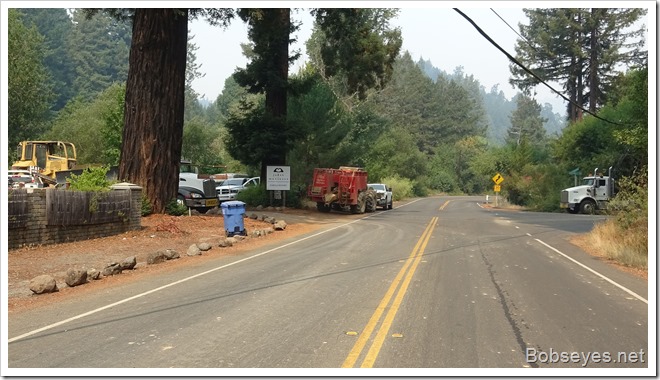 Ken comes by with a gift

I’d just walked out back when I heard my name called so I went out front. It was Ken from Santa Rosa. Somehow he’d gotten by the two road blocks to get here. He had a gift he’d said he’d make for me a couple years ago and had not gotten around to making it until now.

This is what he made for me a sign to go on the back of my old van on the bumper. He’d given it some thought as the dot is a knot in the wood. 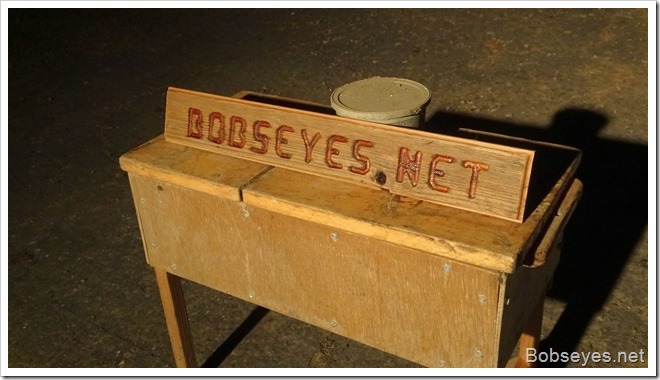 We chatted for a bit but the road block cop gave him an hour to get in and out so he left and I went back in the house and got my dinner going for the day.

Fun with a hard ass

After a bit I jumped back on the dirt bike and rode up into the hills to this spot where I had some fun with one of the guys, I think it was the guy leaning on the back of the truck. I rode up and took this pic without talking to them first. 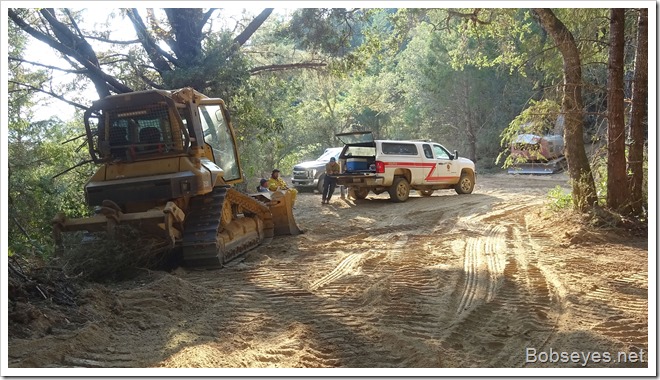 After taking the pic I walked up like I owned the place and he started in on me. What am I doing up there and I told him, but he didn’t get it.

Who’ll show who what

After a bit he said if things went bad with the fire he’d have to be concerned for me and make sure I got out. That got a big laugh out of me and I said, ha, I know everyway up and down these hills and if anything I’ll have to show you out. That got a laugh from all the others and he ducked around to the other side of the truck and I shot the bull with the guys sitting in the chairs. They are on standby just in case the fire was to flare up.

It comes down to there is a state of emergency on and in that situation everyone does what is necessary, ignoring laws until it is over. I was being useful and helping out so I was in my rights.

He was actually doing what he’s supposed to do, but wasn’t using his head. All in all, all the guys up here did a real good job and were fun to work with. I even had some fire crews calling me by name as I rode by which surprised me.

From there I rode up the Pool Ridge Road to what we call the turn around and stopped here. The red car is a commander’s car from Santa Rosa. 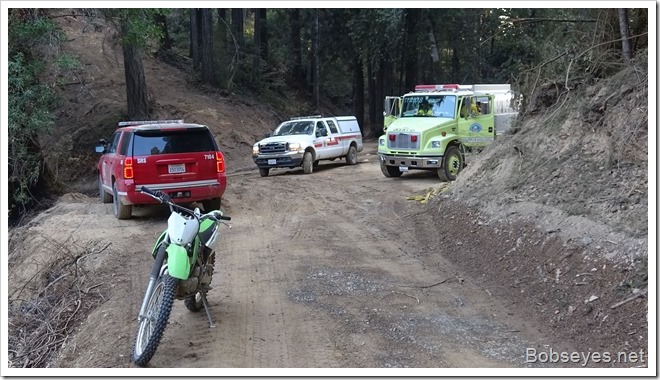 I talked with the guys on the right with the trucks. They are water tending trucks feeding water down the backside where they were cleaning up a back burn. 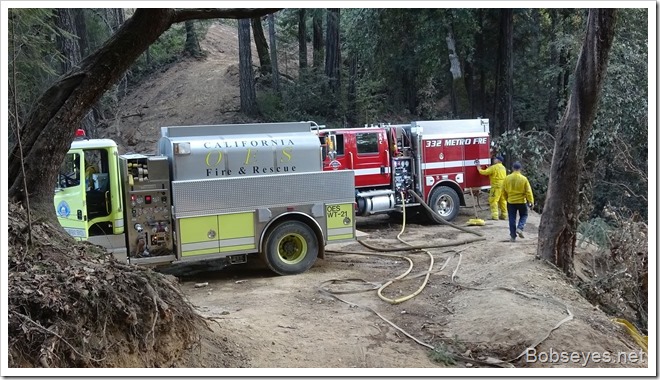 Chatting with the commander

Then I went over to the commander’s car and had a nice chat with him. He’d seen me around but this was the first time I met him. Nice guy we had a nice long chat.

I went on home down through our place and did a lot of napping and chair hopping the rest of the day.

This morning I received an email from a neighbor  by the name of Dan.

He sent me this article that was pretty interesting of a town that took over forest management to protect themselves from forest fires when no one else would. I found the article interesting.

I had a nice easy day and hope to get out for a yak tomorrow as they’ve moved the roadblock up the road from me so now I can get in and out of  my place without any problems.