Worn Out, Some Visiting, Some Resting and A Little Work Too

Going kayaking but never made it

I planned to go kayaking today down at Jenner. But my body was so sore from my chicken project I could barely get out of bed and get it going.

I did get it going and stopped by Ray’s house on the way and  saw his new puppy and shot the bull with him for awhile.

He says he’s getting a new truck so maybe we can get him out camping.

Kayaking got canceled and we talked chickens

When I left I was out of the mood to kayak and I just needed to give my body a rest so I drove on down to John’s house, Ray’s brother to visit with his wife, Cheryl.  She has chickens so we talked chickens and I learned a few things.

A visit with two Johns

Around noon she had to take off so I headed on home. At the stop sign at the bottom of the hill that John lives on, John drove by in his county work truck as he one of the guys that puts the river dams in, in the Guerneville area and there’s a bit of prep each year. They’d just removed all the brush that caught up in the dam boards through the winter. I knew he was headed to the county yard so I followed him in. He and his boss also with the name of John were having lunch so I shot the bull with them until they had to go back to work.

Not in the mood

I drove on home and wasn’t much in the mood to do any work so I sat around the yard and studied the things I still  have to do.

Working on the pen roof

Eventually I started to work on getting the metal roof for the pen squared away and added the 2×4’s you see in this picture to help the water go in the right direction. I still have to wire all the metal roof down to the pen but I wasn’t into that today and thought I was fortunate to get what I did done on it. It needs to get wired down before a wind gets it. 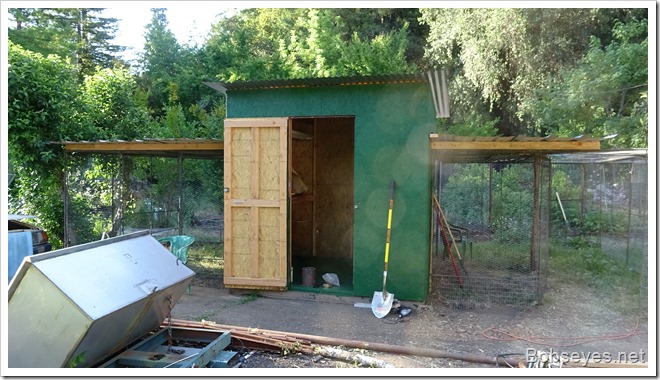 I sat around some more and then picked up the shovel and dug a ditch here to put some wire in to keep critters out from under the shed and out of the pen.

I’ve got the ditch dug on this side. There’s another one on the other side of the shed which I also did. 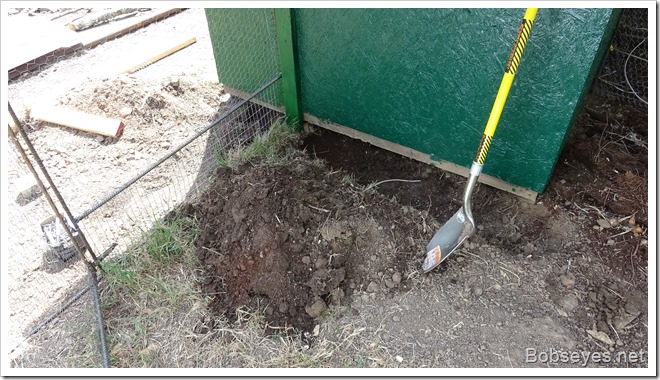 I doubled up some chicken wire and stapled it to the shed and then buried the wire in the ground to detour any digging. 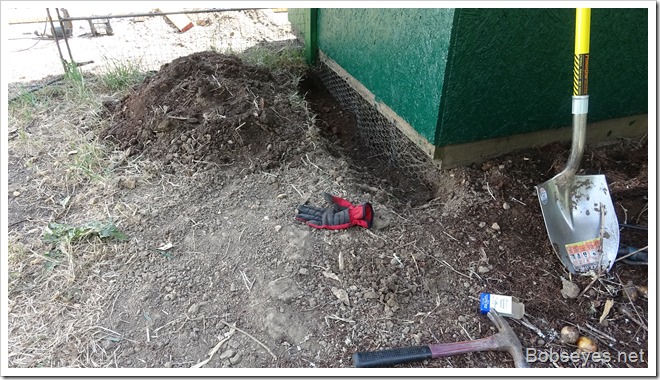 Along the old driveway there is rock on the edge of it. Since I had to dig the rock out to bury the fence I removed it and will fill the ditch back up with nice dirt as it’s a place to grow things as the area will get watered from the sprinkler on top of the pen. 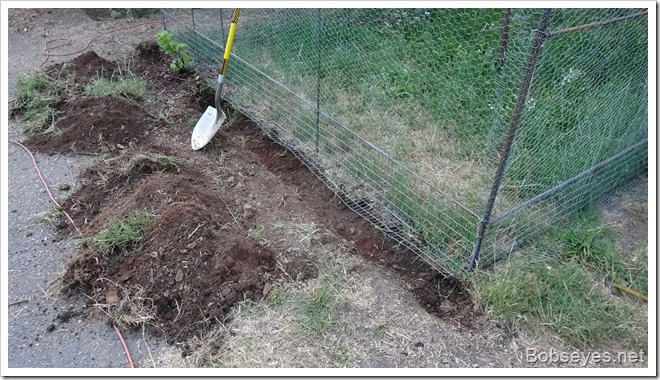 Here’s a better picture of the wire I will bury in the ground to prevent digging. I’ll move the rock to more useful places that get muddy where I need to walk. 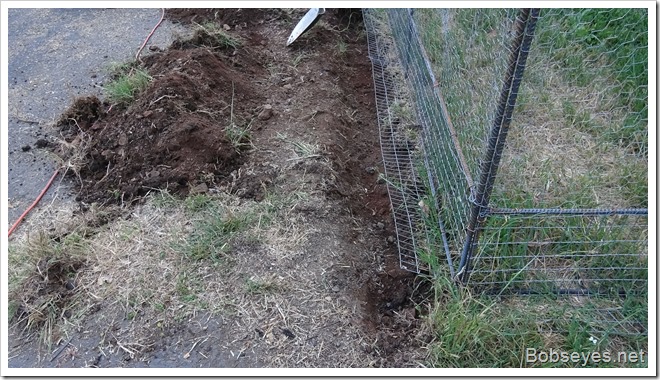 I still have to dig and bury the rest of the pen, but all the rocked part is done and the other part is just dirt so it will be easier to dig.

I still had about an hour before dark so I sat around and chair hopped until it got dark.

And that was my day fairly restful even though I did get some work done.

1 Response to Worn Out, Some Visiting, Some Resting and A Little Work Too