Working On the Hermit’s Water Spring After the Forest Fire

Once I got it going today I headed up through the state park with my car. My dirt bike isn’t licensed  for the road nor am I to ride a motor bike so no more dirt bikes in the park as they shut me off which I expected once the forest fire was over. I really got shut down because of the other neighbors riding their dirt bikes through the park. They were nice to ignore the rules for me while the forest fire was going strong. They made up for it on the way home today.

I had trouble rising the hermit and thought maybe he’d died, as one never knows. But it turned out he had the music on load but once I opened his door and shouted, he heard me.

The fire burned right up to his house and he is fortunate to still have a house. The hill is burned there in the background. 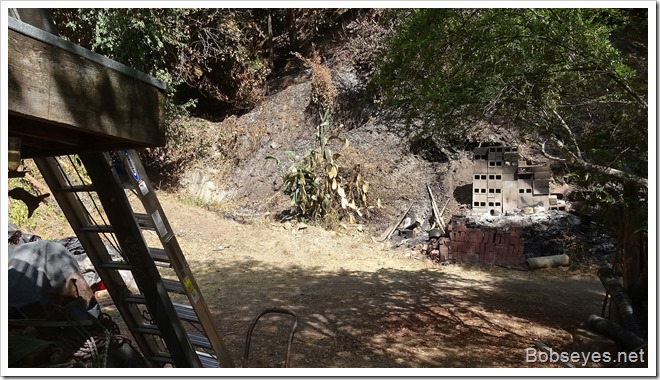 The electrical company was replacing poles and lines today with choppers all day long so the forest peace was shattered. 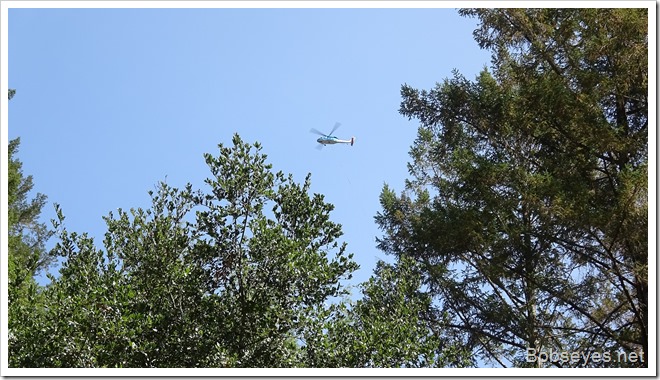 I chatted with the hermit for a bit to see what he wanted done. We weren’t in total agreement on everything as I wanted to finish checking out the spring I was working on last week and hadn’t finished and had some curiosities about that spring like where the heck was it under the dirt and soot that had slid down the hill into the ravine covering the spring up.

I headed straight up the hill behind his house. Most of his black plastic water line burned up worse than this one. Most of it was totally gone. 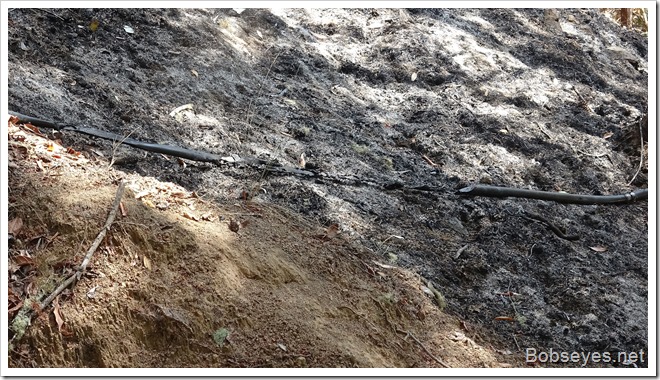 It’s a steep climb up to the tank spring through all this ash and not much of a trail even before the fire and now the trail is mostly non existed so I  took a shovel with me and started up through here  hunting for the easiest way to go. 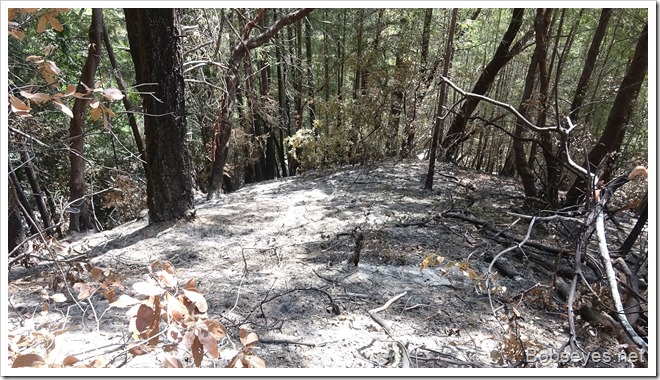 The first thing I wanted to do was hike up above his spring to see if there was any other springs above it so I had to hike up above it going through here. Nope, no water above the spring he had tapped and was now buried. 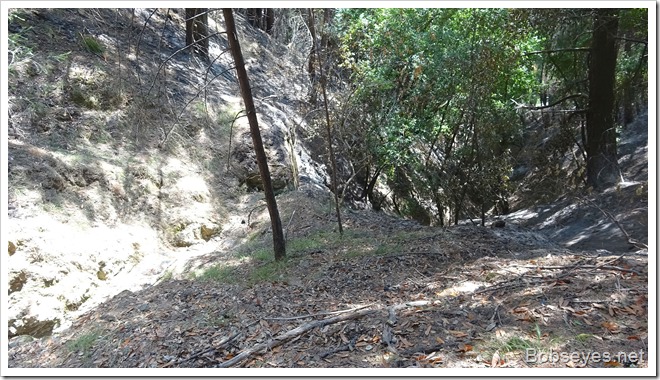 All this dirt and soot slid into and over the spring box and I wasn’t sure where it was. I had to move a lot of dirt to finally find the spring tap. 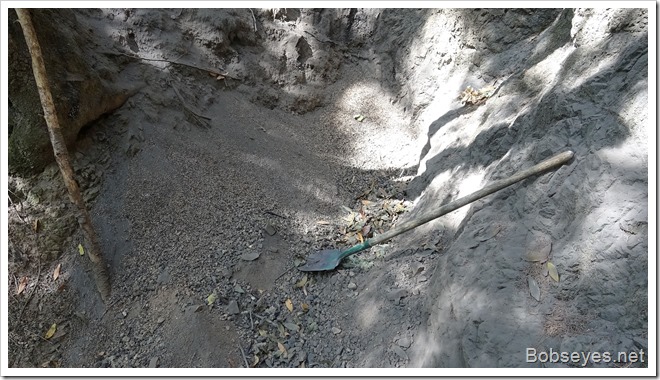 After much shoveling and some breaks to rest I finally uncovered where the spring tap had been. The black plastic pipe had burned up and the spring was completely dry so no good and now I was beat. The pipe by the shovel was all that was left. 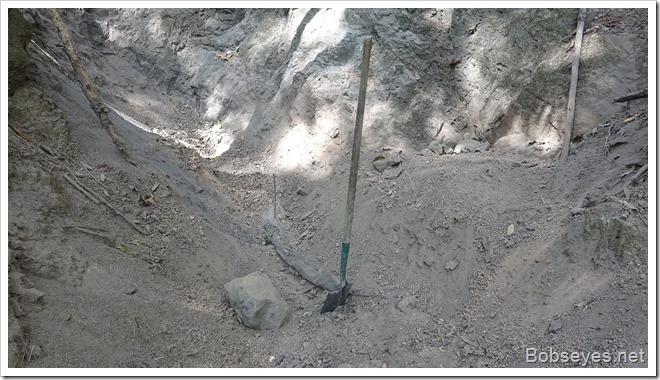 After that I went on down to talk with the hermit some more about the situation. While I was talking I suddenly realized I left my camera up there which I’d need to get which meant another steep climb to get it.

Getting to another spring

I did retrieve the camera and then tried to make my way to another spring. I had to do a lot of digging of the trail to  keep from sliding down the hill so the going was slow and was tiring me out.

I went up through this spot to get to the spring. Again the trail was bad from the fire and I had to dig a lot. 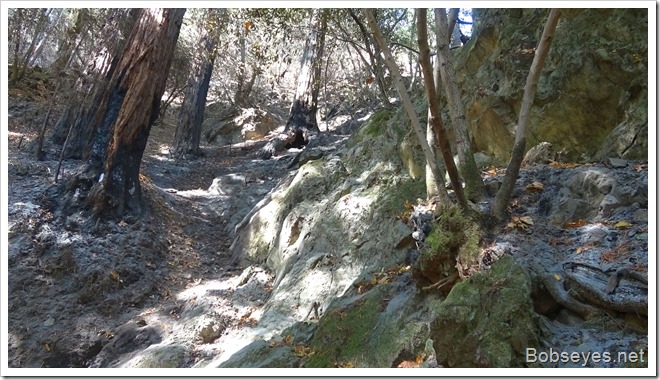 This is the other spring which is full of more dirt than I wanted to move and there didn’t seem to be much water at this one either. 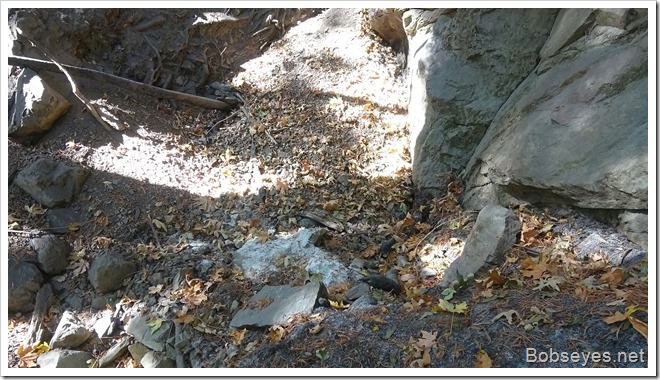 I thought there was another spring so I hunted around for it and dug out the trail to it as the trail was a mess and mostly not existed.

Just too steep for tired out me

I was able to get to this spot which was about 50 feet from the spring but it was just too steep in this part and the trail was real bad gong over some rocks. There was a 90 foot drop down the rock face and I was too tired out to chance going over it at my age so I stopped at this point. 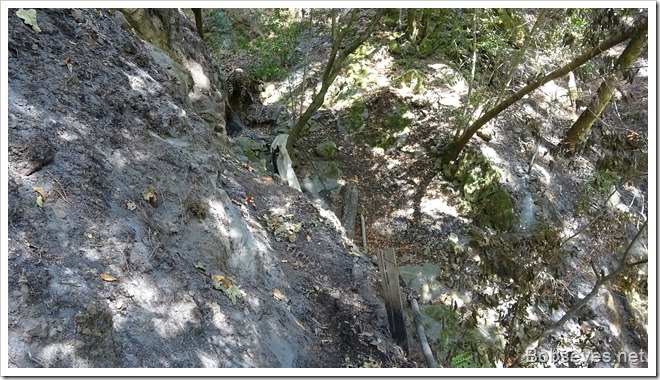 I was able to get to the burned up water line and it had water coming out of it so I had a nice drink. It may not look it but the drop off below here is very steep and dangerous. 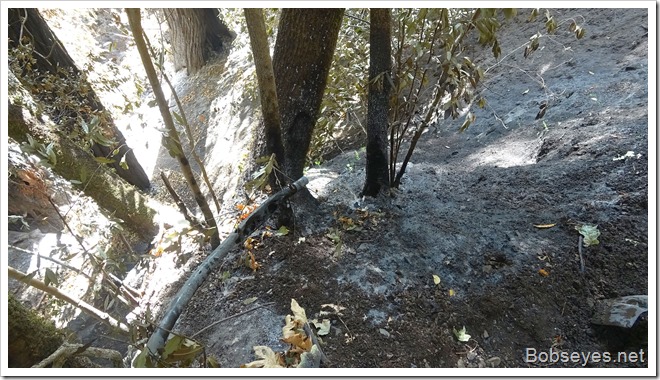 So now I was all tired out and had to get down without killing myself so slowly made my way down through here,  very slowly. 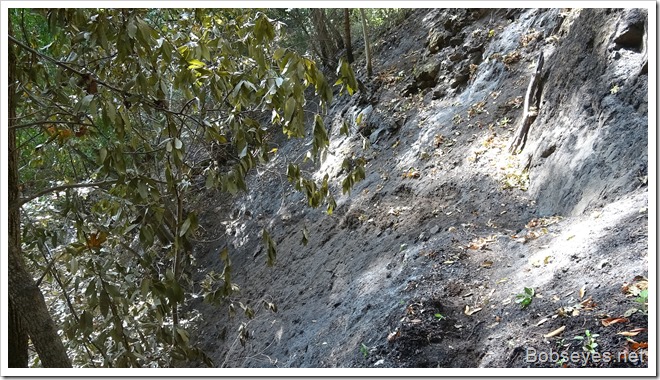 I took awhile as I had to back track more than once as things got too steep and I couldn’t go.

I finally made it down to the bottom where the 3  creeks meet but I couldn’t get out because the creek sides were too steep and the only place I had to go was down into the creek here. 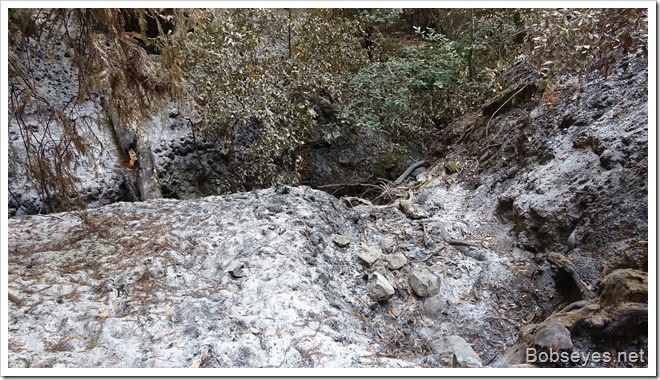 Only one way out

I worked my way down through the sticks and big roots until I got into the creek and still had trouble as the creek sides were so steep I had a hard time getting out of it but finally did get out. 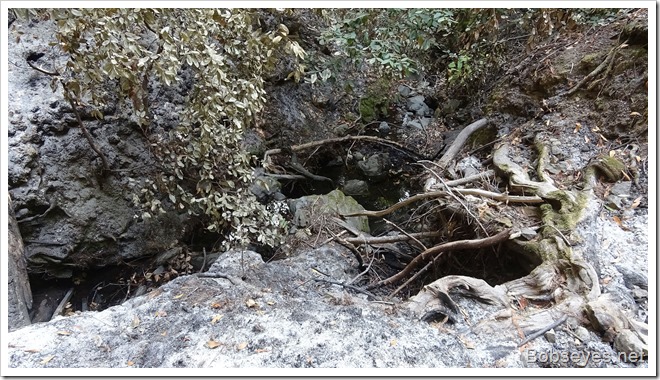 I made it back to the hermits house where I gave him a report that most of his pipe was burned up and we’d need to do some trail work before we could install new pipe and it was going to take some time to get it all done.

The chopper was still working away as we talked and they said the hermit would have power by Friday a couple days ago when I talked with the power guys. 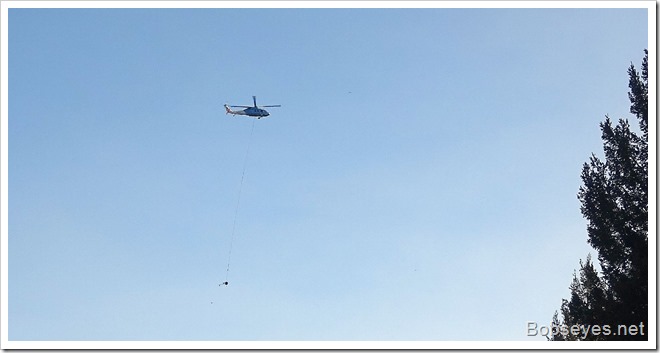 I was pretty beat and pretty dirty too. I heard and saw this chopper working away with the power guys as I entered the state park. They sure make a lot of noise in the forest. 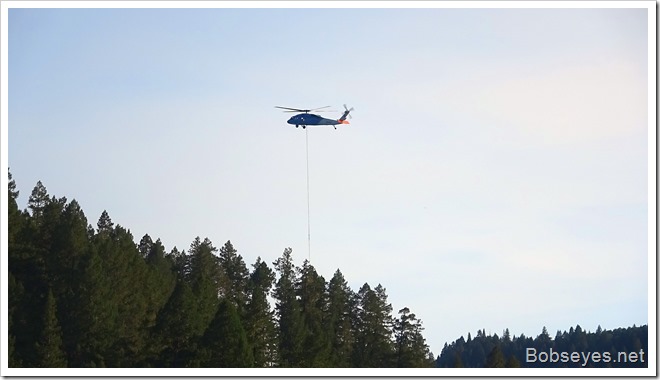 Got a park key and a pass

When I got down to the park parking lot I saw some people I knew there and needed to find out about getting through the new park gate they just installed as the park will be closed for quite some time to the public as there are a bunch of unsafe trees that got burned and might be dangerous.

When I got out of my car I heard do you need a key? Sure do. They gave me a key and a sticker for my car so I can park anywhere in the park without getting a ticket. So that was good.

Once home it was nap time of course and that was pretty much it of me today.

Nice day working in the forest.