I had lots of work to do up at the Hermit’s place and got up there just after noon.

I was surprised to find the trail into the spring had been worked on and improved a lot. I found two guys at the spring tap which was good as this job was bigger than I wanted to tackle by myself as the forest fire had wiped out all the trails as they weren’t very good to start with.

This is where he will get the water into the pipe down to his house. The guys were cleaning it out. 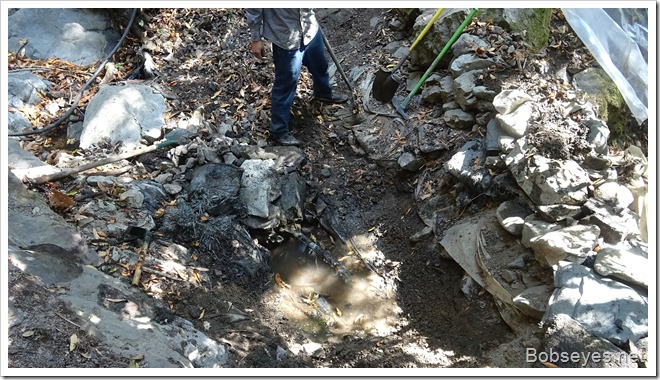 I let them work on that and I starting working on this spot with a 90 foot drop. I used my Pulaski digging tool and was able to cut some of the softer rocks out and made it a bit better, read that safer. I than had the guys pull all the old pipe out so we wouldn’t trip over it. The ends of it had been burned up and I don’t like where this is put in such a dangerous spot in the first place. I plan to plumb things a bit different to improve the safety when working on things. 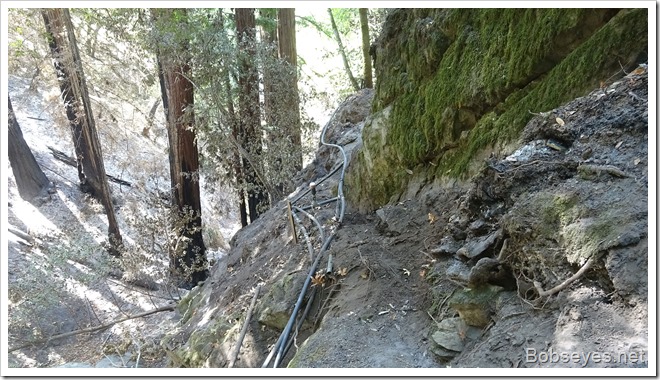 Once past that bad spot the guys joined me and I preceded to show them how to make a nice trail to walk on and put the pipe on.
The trial must not have ups and downs, only a very slight continuous down slope so the water will flow without stopping up from an air bubble blocking the pipe. We’re just getting started here and you can see the hill is a bit steep. 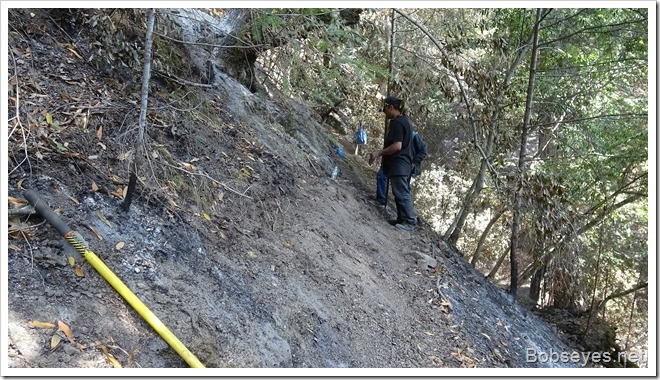 After a few hours of working I was too beat to continue and also be safe on the steep hill so I worked my way down the hill to the creek and got a good drink of water here as there’s no water to the house yet and I don’t drink out of plastic bottles as they can have other stuff besides water in them and they aren’t worth the risk because of my corn allergy thing.

The creek where I got a good drink of fresh water. There isn’t anything upstream to make this water bad and it tasted great. 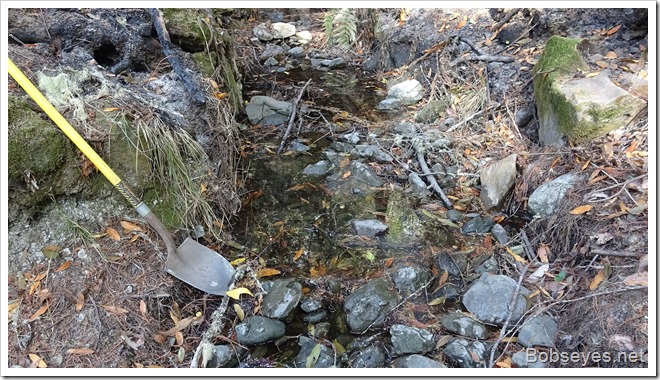 From there I went up to the Hermit’s house and found him busy cleaning out his fridge and freezers as while he was away from the forest fire the power went out so they were a mess by the time he got back home.

So I told him what we were doing and then told him I was moving the last part of the pipe trail down lower to his house to make it better and stay out of the solid rock where it was which would save a couple days work. He didn’t like that too much and said it worked ok the way it was. He’s stubborn and doesn’t really understand how water flows.

Eventually I took off up the hill from his house to lay out where the spring pipe would go and told him I’d put it where it needed to be to make it work best. I left him grumbling. :O)

I didn’t like where the original pipe ran as it was running up hill just a bit, which is not good for a gravity flow and it went through some real rocky areas where we couldn’t put a good trail and would have to lay the pipe on the rocks trying not to break our necks.

Laying out the pipe trail

I laid out a path through here to the upper side of his house and stayed out of the trees and rock on the upper side as it’s steeper than it looks and is very hard to stand without slipping down the hill as the rocks are very slippery. 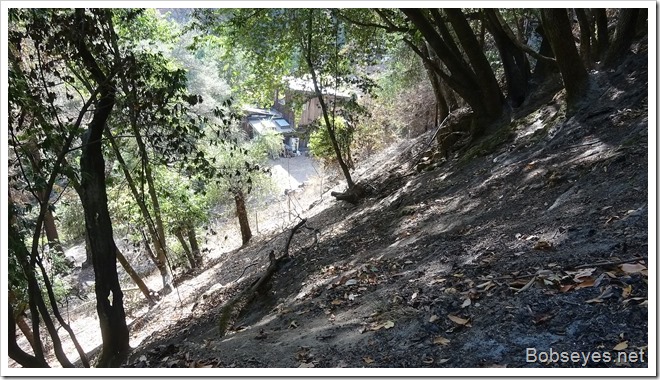 I had to use the shovel to make foot holds while going through this part where the  pipe needs to go. At least it’s dirt and not rock so a trail can be dug. 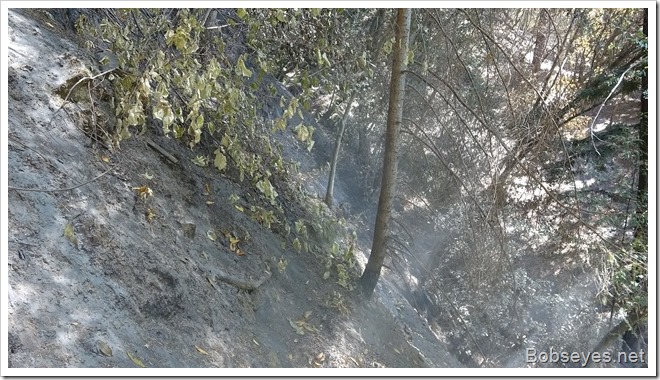 After I laid out the trail I showed it to one of the other guys who was the boss and said to follow my pink flags and keep the trail at a very slight slope all the way to the house.

It was almost 5 so it was time to quit but before we left I informed the guys to make that trail no  matter what, first for safety and then all the pipe laying after will go fast and easy instead of fighting the pipe on the slippery hills. In other words make the trail no matter what.

We took off in separate directions, me to my car and I went on home for the day dirty and sooty and in need of a shower.

Of course after a hot shower I needed a good nap and was pretty much done in  for the rest of the day. Here’s the little bit of sunset from looking up through the forest. 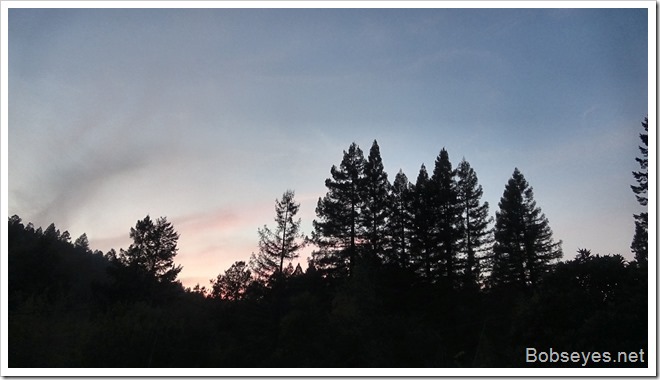 Helper’s are much appreciated

I was sure glad the other 2 guys were there to help and they now know enough to finish the job without me or at least while I’m not there.

I will go up on Monday and check on them and make sure they are headed in the right direction. Hooking up the pipe is easy once the trail is in. It’s the pipe trail that needs to be right to make sure the water will flow down the hill as we don’t have much drop in the pipe before getting to the house.

Enjoyable day working in the forest with a nice temperature.

(Visited 227 times, 1 visits today)
This entry was posted in Uncategorized. Bookmark the permalink.