Working On Chicken Pens and Putting My Chickens Together

Once I got it going today I went outside and cut some welded wire as I needed to finish putting wire in the round around my gates to keep the chickens from digging under and the varmints from doing the same. 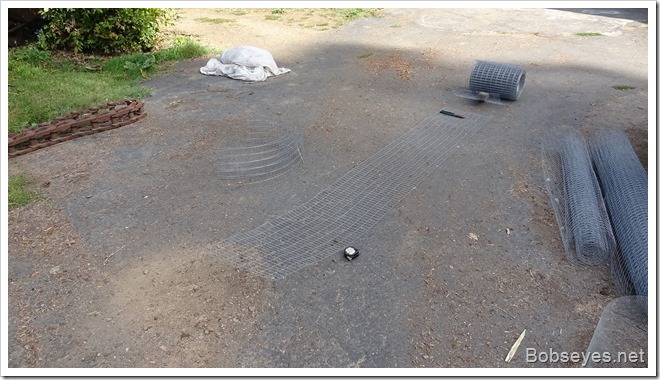 I cut the 18 inch width wire in half to about 9 inches to bury below the ground surface.

Under ground wire is necessary

Most of my pens have this but I didn’t do the gates and some inside sections and after watching the chickens in action I decided this is really a necessary thing for chickens, underground wire that is.

One of the gates

Here’s one of the outside gates I have the wire in the ground and am ready to bury it. The chickens are checking it out, actually they are looking for something to eat as they always do because that’s what they do most is eat. I used hog nose clips to fasten the wire to the rebar under the gate. 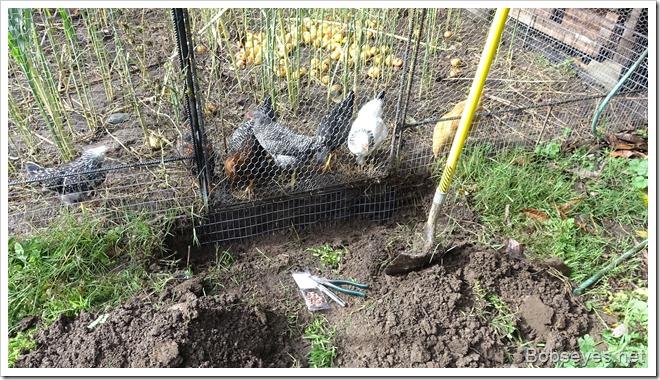 I was working away when my brother Barry drove in. He was headed up the hill to do some work with his chain saws on his motorcycle trails.

I continued installing more wire on more gates and took some breaks too of course.

Needed a ride to get my chicken

Later Barry came back all done. While we were shooting the bull my brother Tom rode up in his golf cart and was going to his chicken pen to gather eggs. 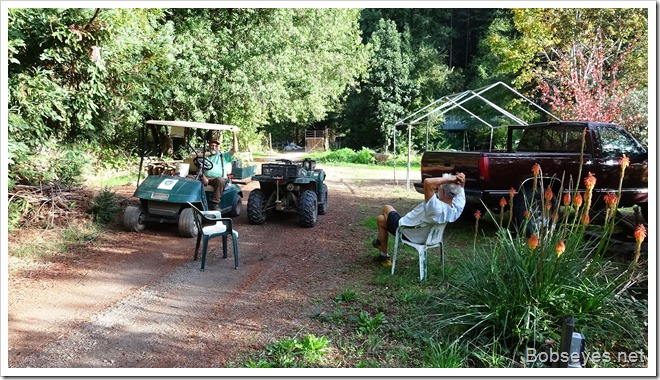 I asked  him for a ride over as I needed to get one of my chickens that got mixed up with his when we first got them.

Here’s some of Tom’s chickens. He has a couple hundred and sells eggs at the farmers markets under Armstrong Valley Farm. 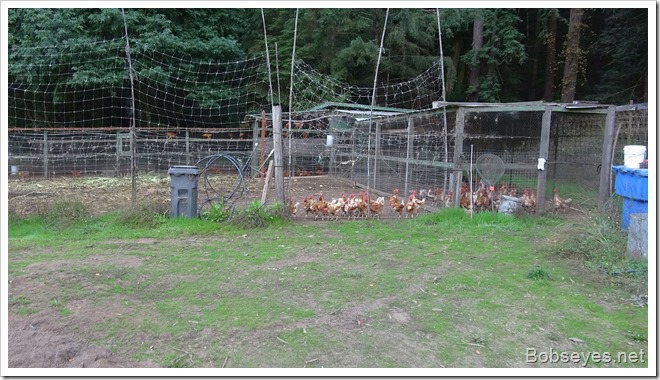 Tom started gathering eggs as you can see in the back. 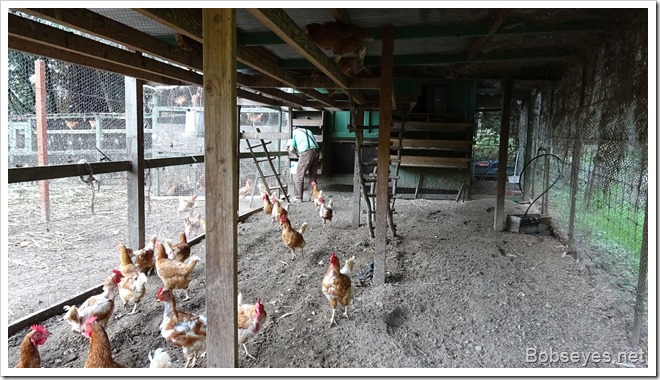 The one with the black tail

I got his chicken catching net and went in to get that chicken with the black tail in the middle there. The others are a different breed and female. 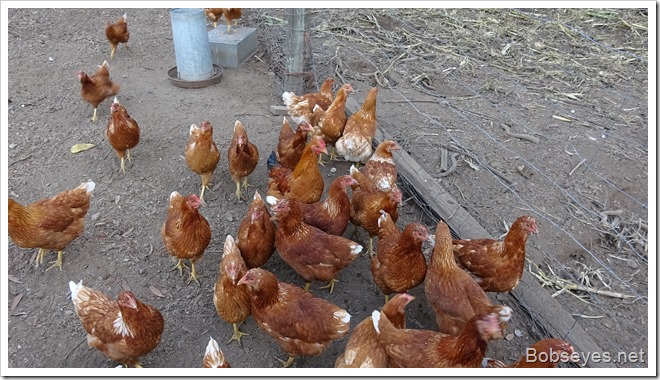 We took him back to my place and I thought it best to put him in his own pen until tonight when I planned to join all my chickens together in the main pen.

Here’s the rooster I brought over where I put him for now where I was working on the wire. 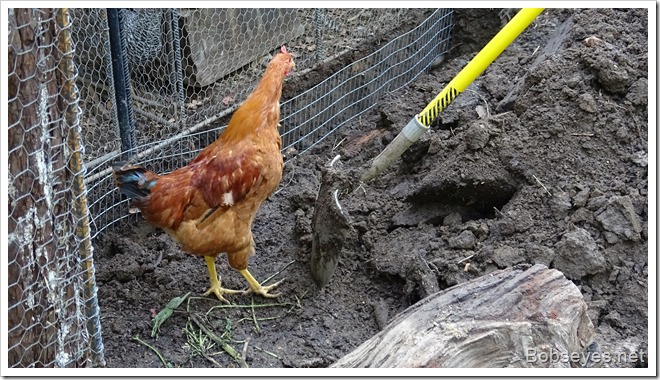 Back to work on the wire

I finished installing this underground wire and sorta half assed buried it as the chickens will move all the dirt around when I let them in tomorrow, once all the chickens are mixed. They’d like to get in now see them in the back. 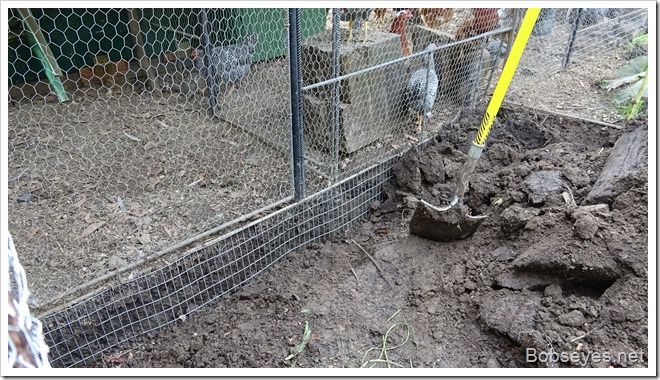 Moves some rock too

When I was digging out the wire for some of the gates there was old mine rock there so I moved it to the back where I do the chickens in and I need to spread it out, but I didn’t get around to that yet. There’s a nice patch of mint on the right. 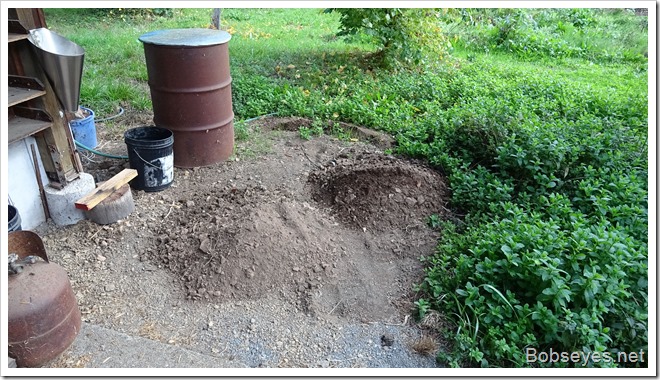 I was thinking I need to get a pot of vegetable stew going and saw I had some string beans ready so I picked the best ones for the pot. 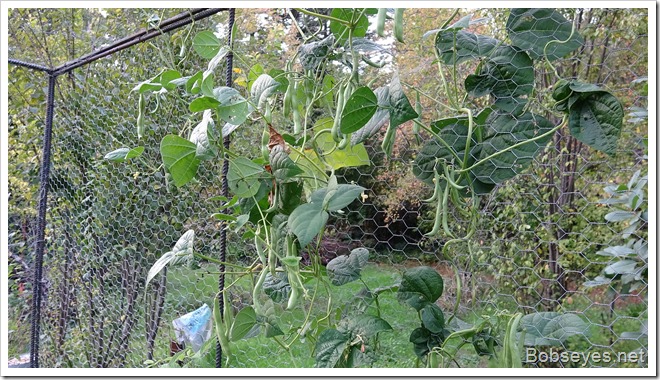 I take some of my breaks in with the smaller chicks and some of them like to jump up on me and cuddle up. 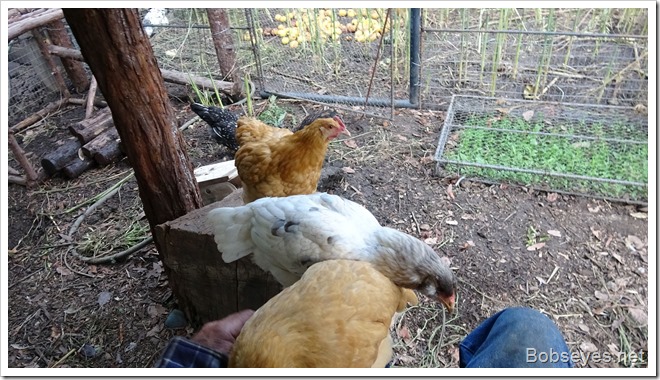 I looked through my garden and got some tomatoes for the pot and some potatoes too. I went over to my brother’s garden and ate some carrots as I like them best raw and instead of cooking some I ate some as there’s no room in the pot anyway.

Let’s see, I also went over to my brother’s storage area and swiped two heads of cabbage that were split so not as good to sell but very good to eat, very sweet.

Just before dark the chickens go to roost. Here’s the younger ones I will move them over to the main pen tonight with the rooster I brought over earlier. I hope they are big enough to defend themselves as chicken’s have to do the pecking order thing and sometimes can be hard to mix without some bloodshed. 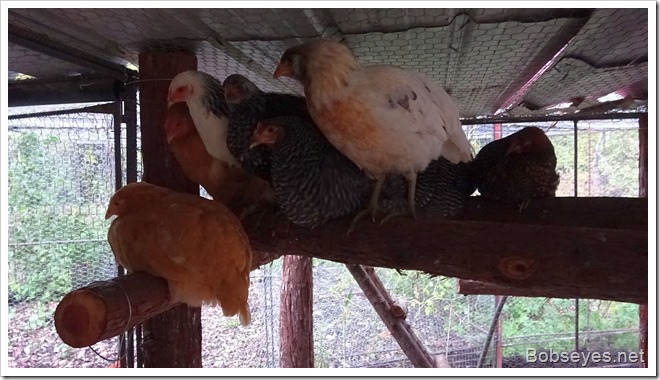 Here’s the larger chickens where they will all get put together after dark. I hear putting them together on the roost after dark is the best way to do this so they get along better the next day. We’ll have to see how it all comes out as this is the first time I’ve tried this. 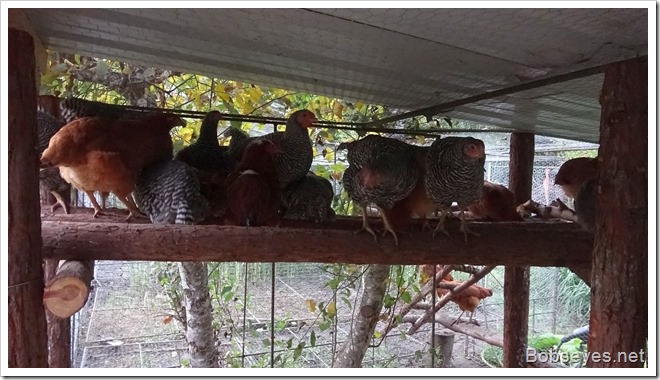 Here’s what being on the roost looks like up close. 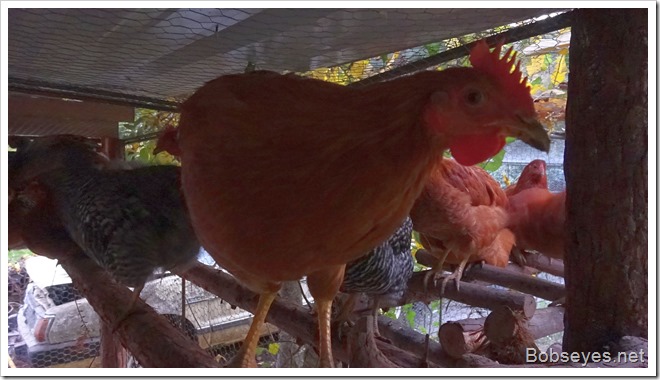 After a nap I started cutting up all the vegetables starting with frying two whole onions sliced up and fried in olive oil, then added string beans, tomatoes, potatoes, some cucumbers and squash with a bunch of water and spices later, oh and a head of chopped up cabbage.

I put the lid on and will boil it for about two hours on simmer.

Now that it is dark I went out and moved the chicks in with the older chicks and put the rooster I brought over with them also. The chicks didn’t really like getting moved in the dark but it all went ok so far. I’ll check on them after I post this blog.

Nice day working in the yard.