Working In the Chicken Pen and Improving My Rodent Trap

Once I got it going today I went out and fed and watered the chickens then let them out to get most of them out of the way as I wanted to dig up under the nesting area as I needed to block some holes to keep the mice and rats from getting under the fed storage shed.

Keeping the rodents out

I dug the dirt out and put wire screen around the base and buried it. 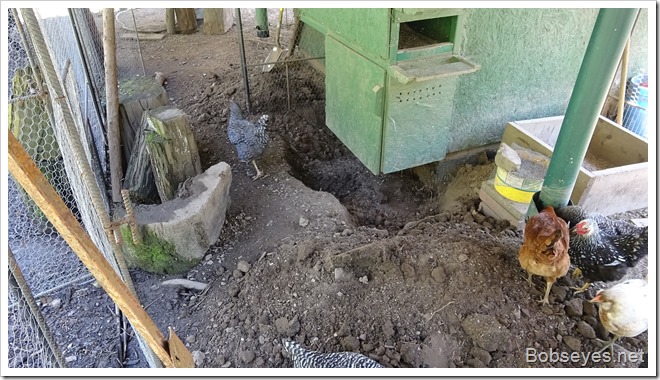 While taking a break I studied the better rodent trap I’ve been working on.

When I tried it out and caught a rat awhile back the rat almost chewed it’s way out as you can see the entrance hole in the bottom of the bucket is elongated a bit. 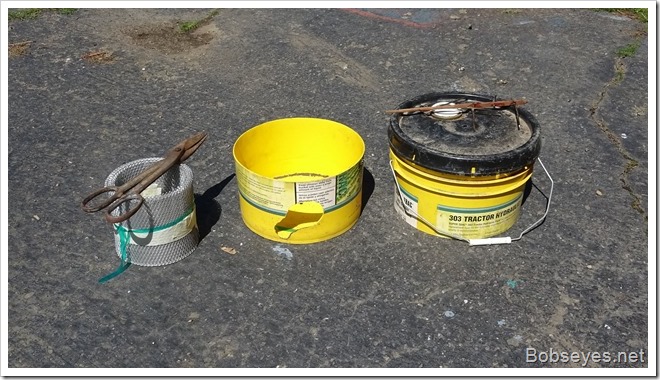 Here’s the bottom of the bucket with the chewed out entrance hole that needs to be repaired and improved. 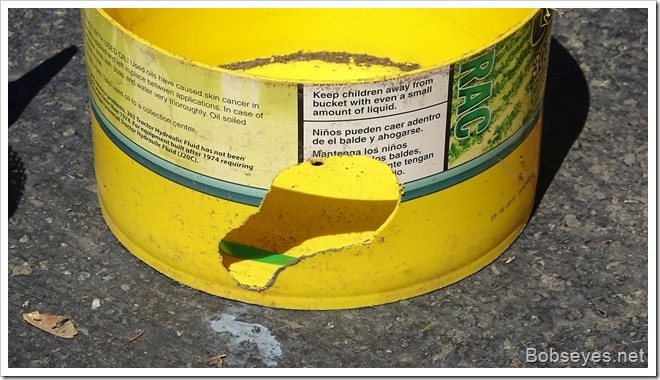 I looked through my stuff and was going to use a piece of sheet metal to line the sides of the bucket bottom but I found this wire in my junk stuff so decided it might work just fine. 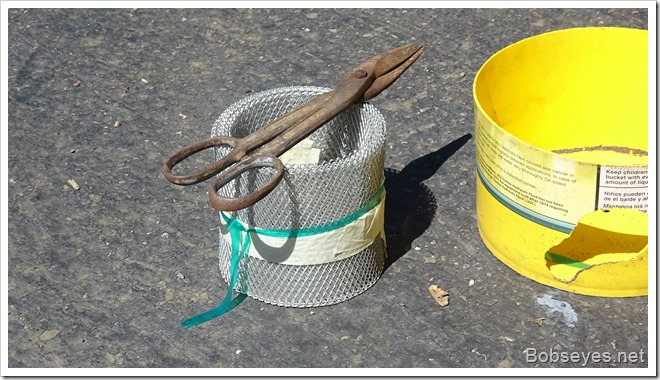 But I  had other things to do so I put that aside until later. 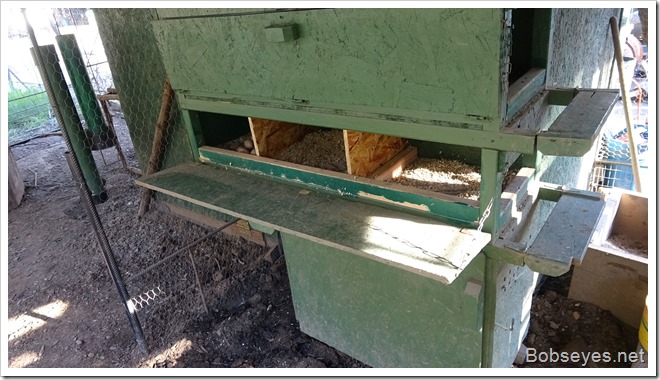 That will do for now to see how the chickens like it this way or not. I have some more stuff to do to the boxes like change the ramp in front to a smaller ramp like the ones on  the right side.

Here’s some of the eggs the chickens laid for  me today in the large nesting box. 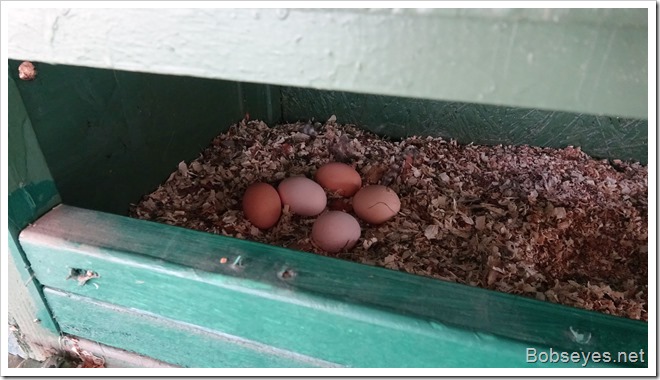 Eventually I’d like to move the poo dirt under the chickens roost out to some trees where it will do the most good so I loosened it up for now and am thinking of adding some more woodchips to it to help loosen it up some more. 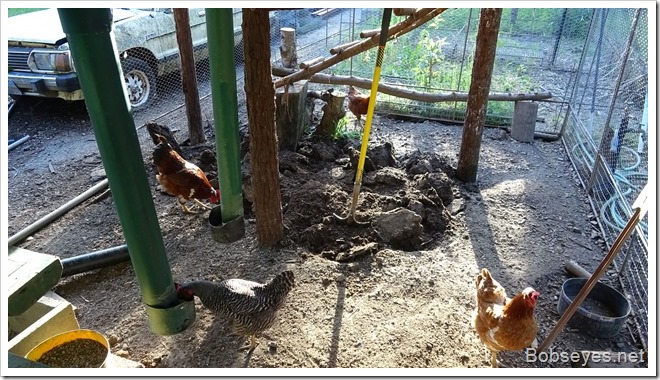 I puttered around the yard and mostly took it easy today enjoying the sun shine and I had a nap or two in there someplace too.

Late in the day I cut the wire for the rodent trap and installed it like this to prevent the rats chewing up the plastic. 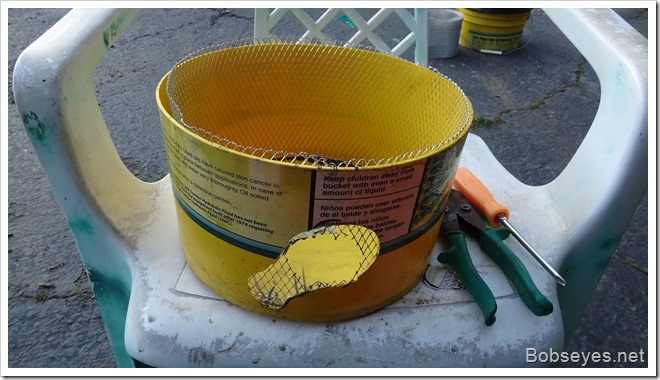 The little stick is the trap trigger which goes through that little hole in the bucket top in the center. 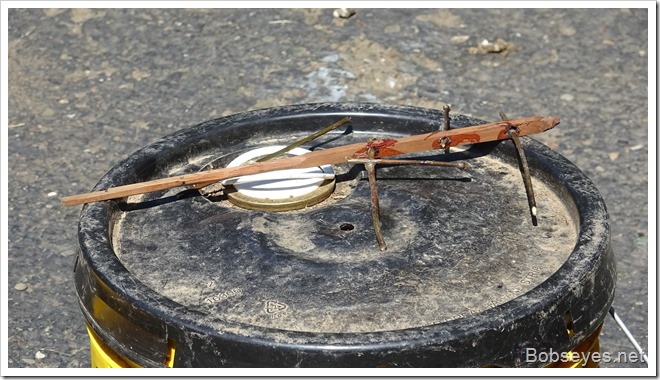 Here’s the two parts of the trap. Some feed is put in the bucket bottom and the stick is run through the top hole in the bucket. The little stick has a small notch in it about an inch down from the top that the bucket top catches on until a rodent wiggles the stick then the top of the bucket falls down around the bottom of the bucket trapping whatever is inside. 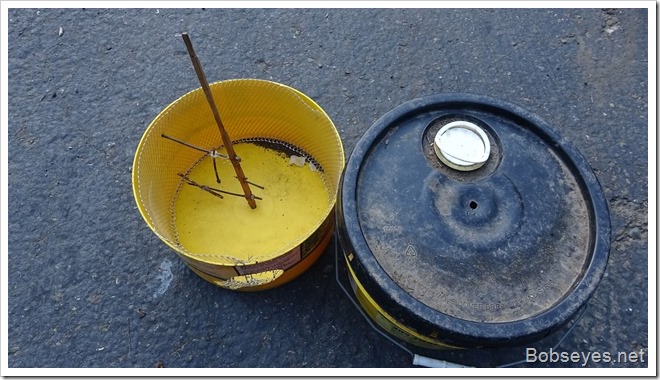 Here’s the trap set. You can see the little stick coming through the top. The top is sitting on the stick notch. When the rodent hits the stick it will fall off the notch and the top will slide down the stick. 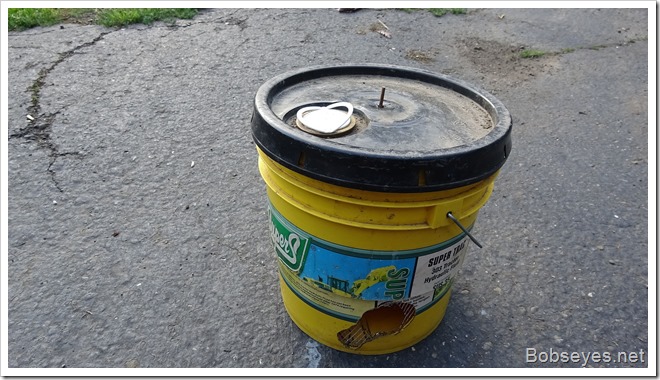