Working In the Blueberry Patch, Chasing Chickens and Picking Fruit to Dry

The first thing I had to do today was check the chick’s water and food supply. 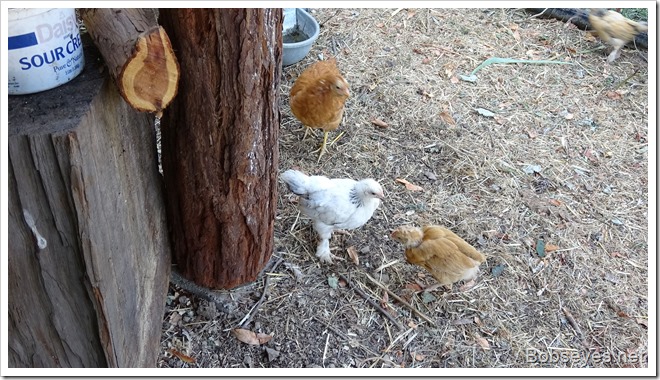 Once that was done I needed to make up my mind what to do today as far as what needs to get accomplished.

Way too many projects to do

I have way too many jobs in the fire right now. The seasons march on so I needed to get the blueberry patch in order as that’s a job that won’t wait, but the other stuff will.  I’m moving the plants out a bit and deeper into the ground. It  means moving a lot of dirt with the wheelbarrow and shovel. I need to get them done so they can heal in and make some more berries for next year, I hope.

Only half to go

The job was already in progress and I only had about half of it to go, so I got to it.

I removed the dirt from this spot in the patch and transplanted the blueberry plants to give them more space to grow. 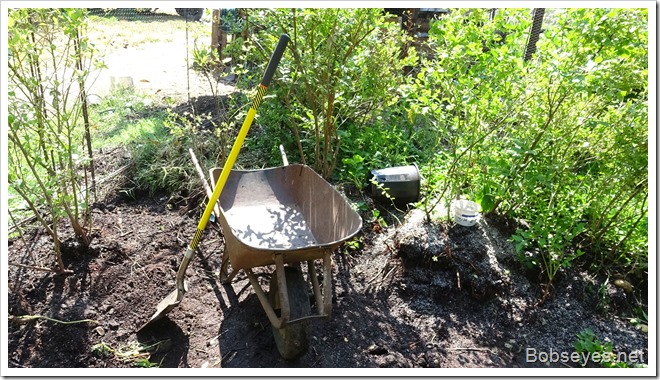 I hauled the dirt out on this path and dumped it just to the left in the growing dirt pile which is just out of sight. 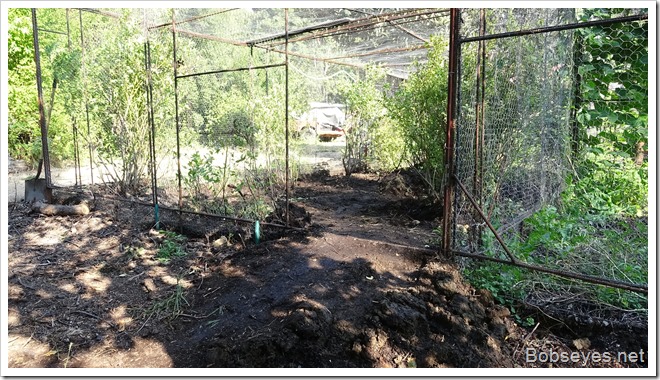 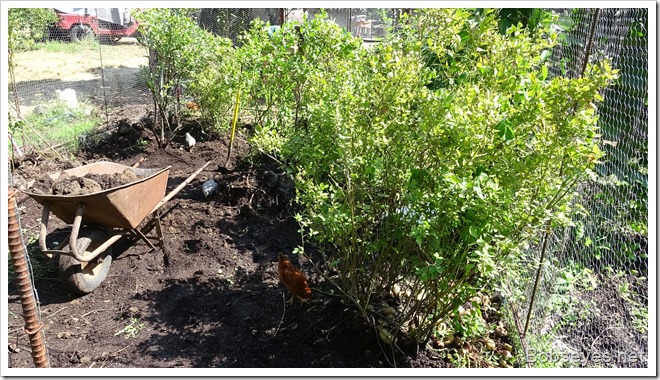 I needed a break around lunch time so I had lunch and when I came back the garden pen next store to this one had done it’s automatic watering and made a bit of mud in the blueberry patch.

I put some dirt on it and kept going. 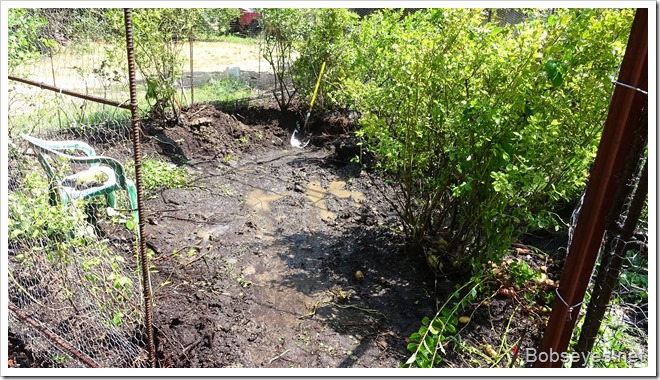 It was a bit harder to get the dirt out with the mud, but I just pushed harder and loaded the wheelbarrow lighter so I could still push it. 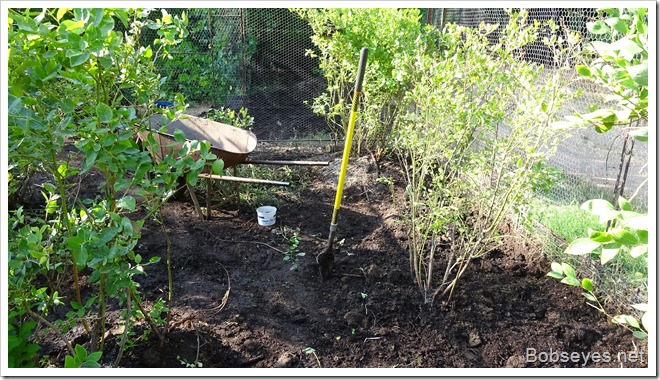 Chicks find their way in

I was pulling a bush out when I noticed some chickens were in the pen with me and getting in my way as they like to follow the shovel to look for worms as I dig and I have to be careful not to slice them with it. I’d knocked the gate open when I was pulling the bush out. 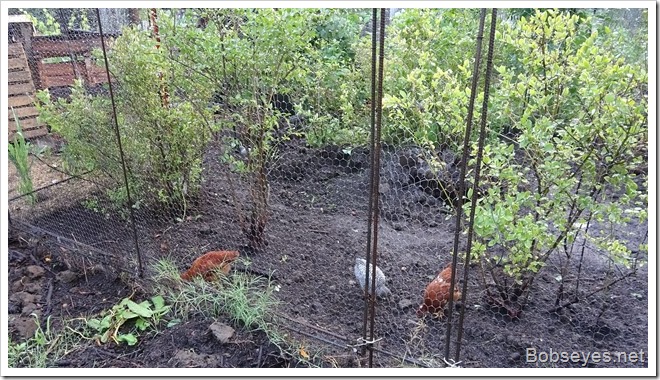 The other problem I had with them is the door was open so I could get the dirt out and three of them went on out so I had to stop and round them up. Mostly they want to get back in when they get out. Two of them went back in without too much trouble but one of them I had to catch by the wing and put it back in. Hope it learned it’s lesson.

By about five I was barely moving so I closed it up. I have about a quarter more to go on that project as far as moving the bushes, then I still have to put some new mulch in the patch.

Picking plums and prunes to dry

After a break to get my body moving again, I picked some plums to put on the dryer. I got two boxes of these plums. 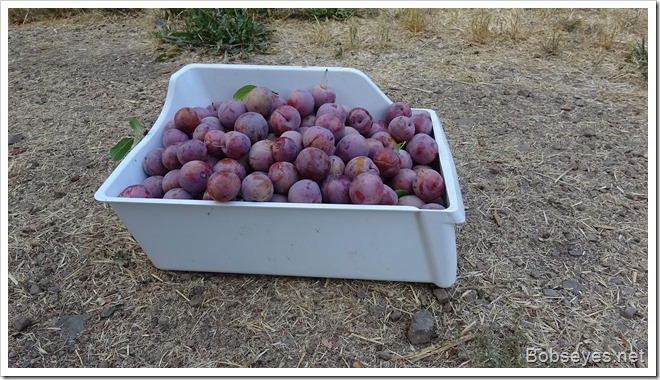 And then I picked several boxes of these prunes, also for the dryer. 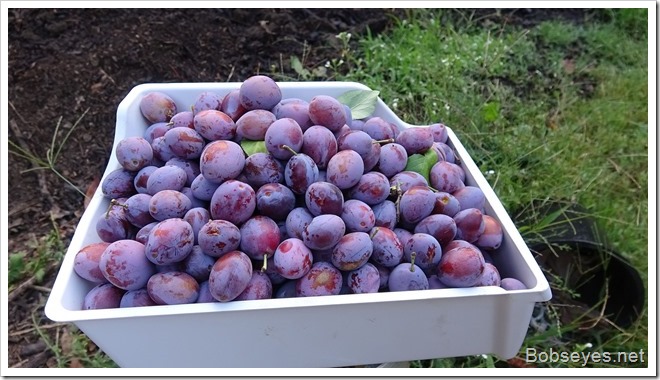 My fruit dryer in action

Here’s where I’m drying the fruit in the back of  a truck bed trailer. The brown ones have been drying for a few days. I still have more to pick, but I’m picked out for the day. 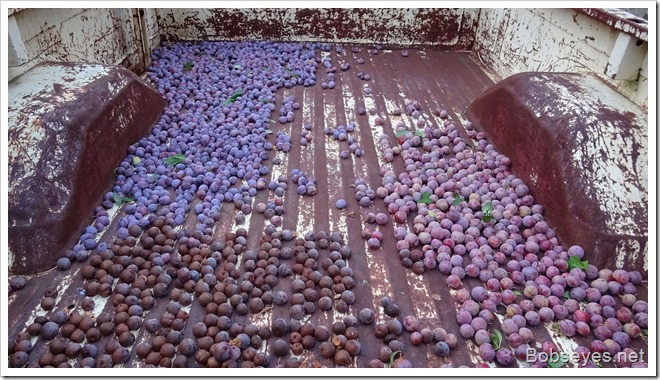 Tomorrow I’m taking a break and going kayaking at Jenner.