Woodchips to the Raspberry Patch, Chickens and Blackberry Vines

Today I was going to try and get some more woodchips moved around the raspberry plants as mulch.

Here’s the chip pile as I started moving them around the plants with the wheelbarrow. 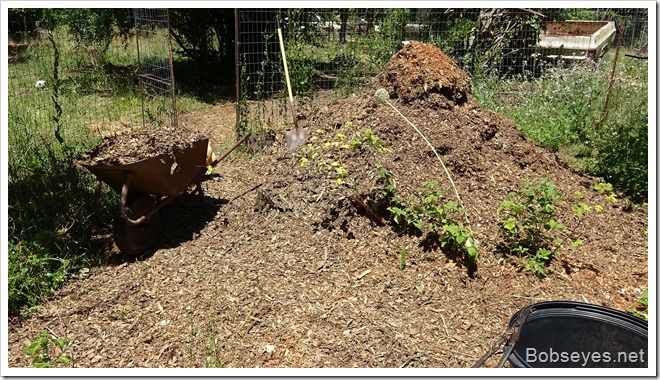 I had plenty of supervisors watching over the operation. They like to dig in  the woodchips. 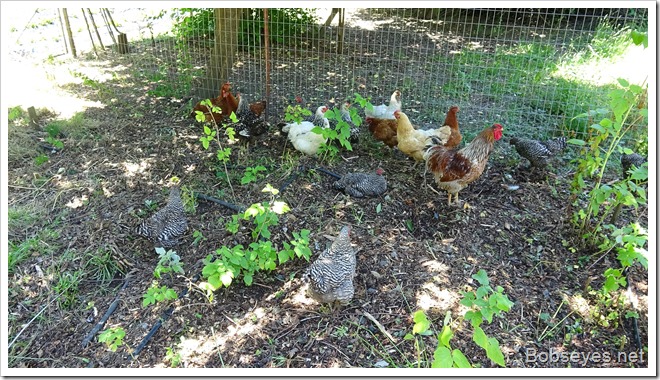 I moved a number of loads of woodchips before taking a much needed break.

When I got started again I grabbed the loppers and cut all these blackberry vines out of this area. I need to get back to work on restoring this area, maybe when I get back from my trip. If I didn’t cut the berry vines now they’d cover the place by the time I got back. 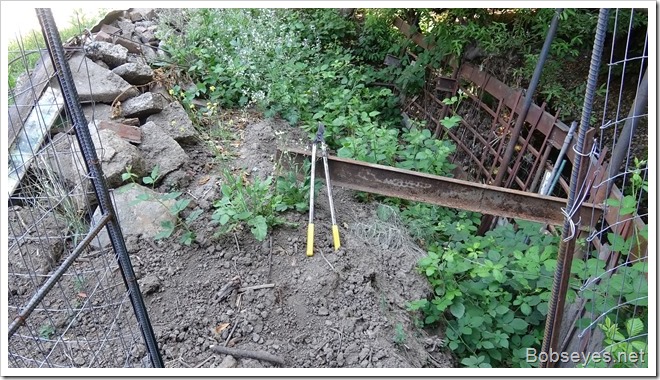 I took the loppers with me when I went back to the woodchip pile and cut these blackberry vines down in this weed collector bin before I got to the chip pile. 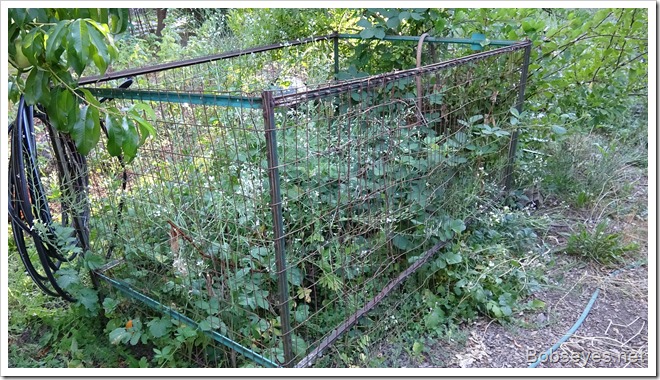 I moved a number of loads of chips and got the pile down to this size before I quit as I was tired out. 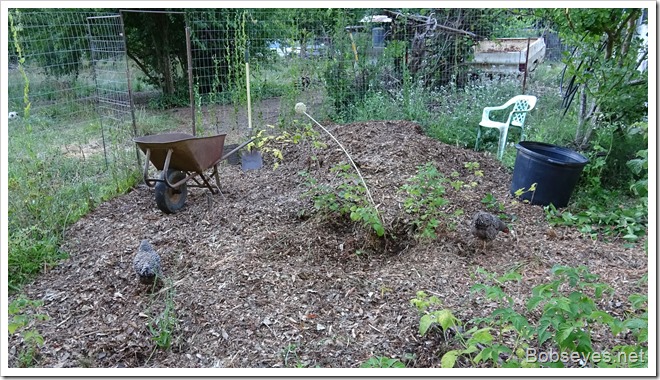 Here’s where I was spreading the woodchips around the raspberry plants. I’m mostly putting the woodchips in here to  help the raspberry plants spread out into the spots between the rows so we  have more raspberries. It does help control the weeds too which is a plus. The bucket is what I use to measure how many inches of sprinkler water I put out when I water. I try to put out about an inch and a half or so each time I water which is twice a week right now. I will try to increase that amount when we have enough water as I want to get more of these plants coming up. 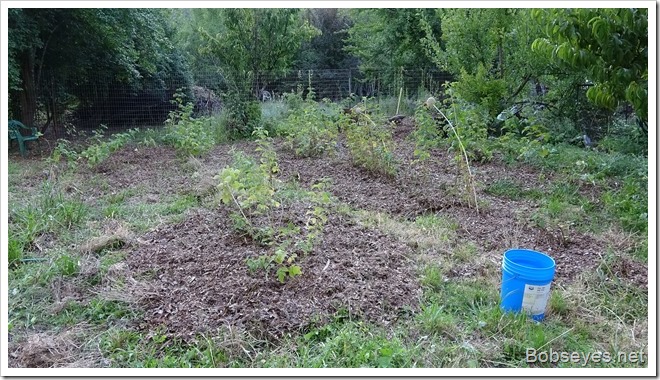 Here’s some more berry plants mulched. Berries will soon form on the green shots you see there and keep providing berries for the rest of the summer. 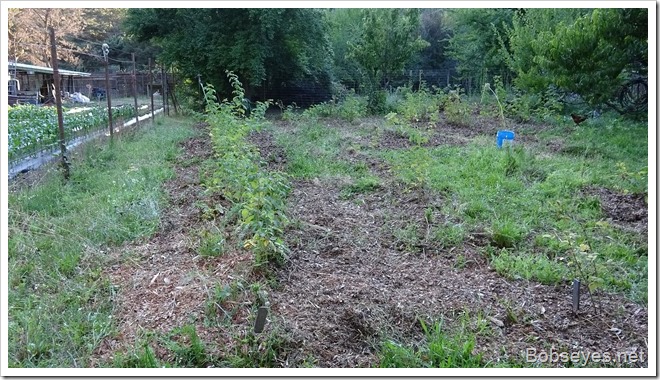 After a good break I went out to see how the chickens were doing.

I spied these little peeps already in there night box. They had a hard day playing around in the pen. 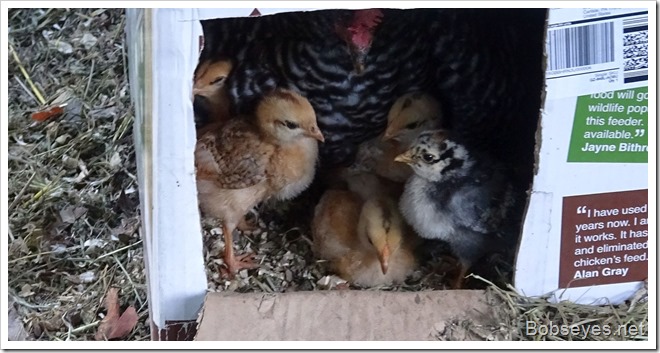 How did that little chick get up on the roost

Buffy  just came onto the roost and I noticed there was a very small chick with her. It’s dark and hard to see but it’s there alright. 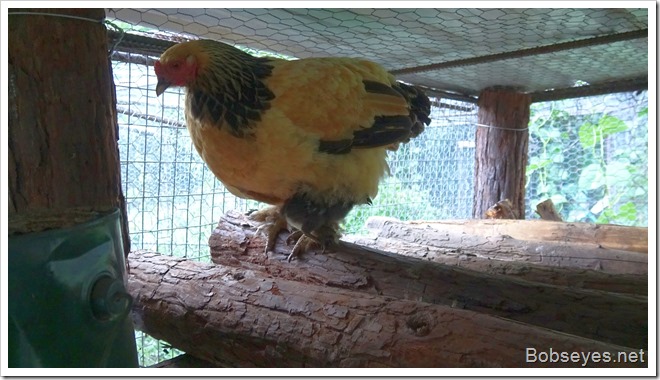 It disappeared while I watched

As I was looking the little peep disappeared from under her or so it appeared. 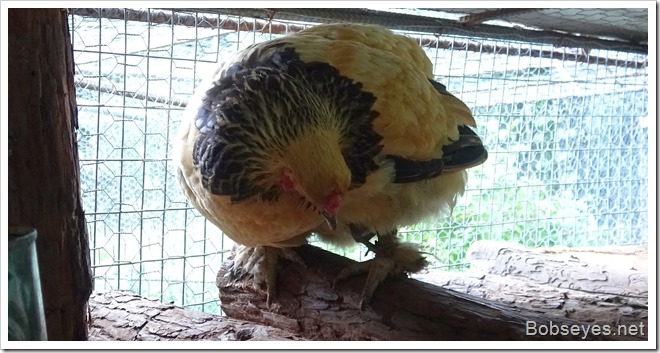 Here’s her sister, Fluffy, a light brahma on the roost and ready for the night. 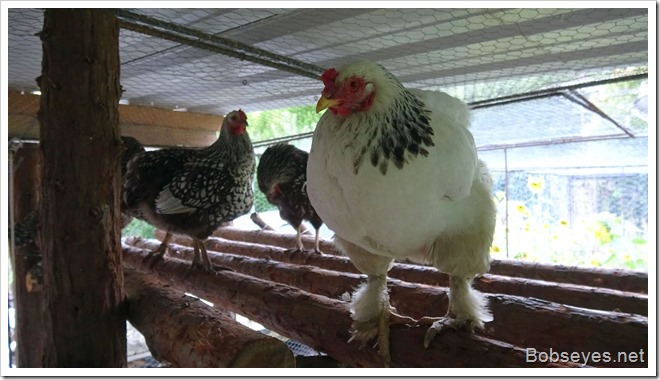 I opened up the feeder as I do lots of times before bed time and they crowd around and feed until they are all full. Of course Fluffy came off the roost to get some chow too. 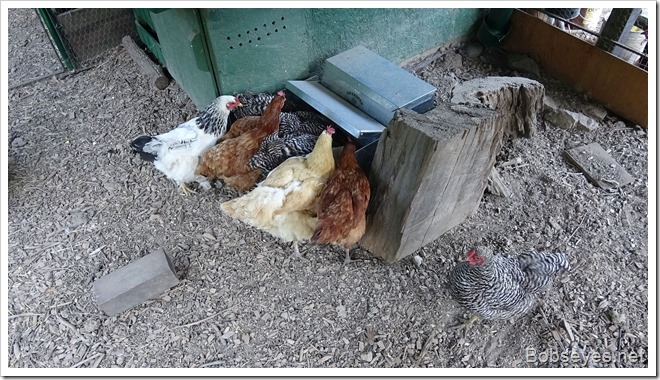 Those woodchips tired me out so I took it easy in the evening and mostly just puttered around. A good ending to a nice day.

1 Response to Woodchips to the Raspberry Patch, Chickens and Blackberry Vines