Woke With a Sore Back That Really Slowed Me Down Today

Things didn’t go so well this morning when I got out of bed. Seems I did my back in yesterday or maybe it took a few days but whatever I couldn’t stand up straight and that made my back hurt even more.

So right away I put on the cold pack for about a half hour and that helped a little. Usually after a cold pack I can stand upright, but not today. I put the cold pack back in the freezer to get cold again and grabbed my walking stick and went outside.

I knew most of the stuff I planned to do today wasn’t going to get done so I just puttered around hopping from chair to chair doing little chores and then sitting to let my back calm down.

I did turn on the sprinklers to water the new chicken grazing pen and repaired one of my grow panels that the wire was coming off.

Once my cold pack was cold again I’d sit on it in the house for about a half hour and go back outside again and putter some more. The cold pack was helping but not enough to get me upright, even though I tried all day.

Chicks to the grazing pen

A couple hours before dark I let the chickens into the grazing pen to do some grazing. 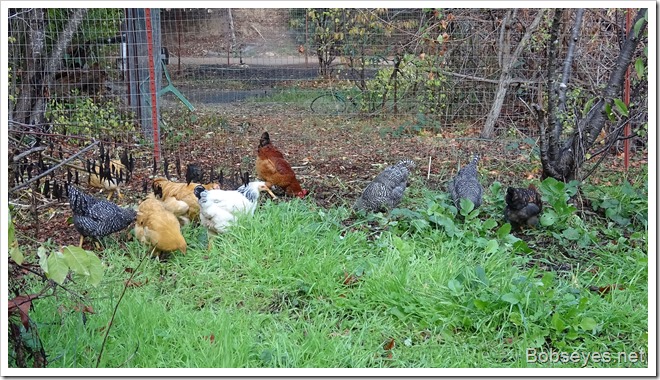 When I opened the gate to let the chickens into the grazing pen all the older chickens hurried right out there and started tearing things up. But all the younger chickens didn’t go out, but headed for the feeders and started feeding.

I found that quite interesting. It means the larger chickens are keeping the younger chickens from the feeders which I hadn’t realized before now.

To remedy that I will  move a feeder to where the younger chickens hang out and see if that helps.

And finally my very friendly smaller white chicken wouldn’t go out to the grazing pen but went up to roost instead. I think this is my smallest bird and it should eventually lay blue eggs.

I walked over to the roost and let the chick jump onto my shoulder then took her out to the pasture and sat in a chair with her on my lap. She seemed to want to get down so I let her and she began to feed vigorously so I think she was hungry. So maybe she’s real small because she’s not getting enough food as the bigger chicks are bullying her. So I’ll keep an eye on her and make sure she’s gets lots to eat.

The chickens were in the grazing pen scratching away and tearing things up. 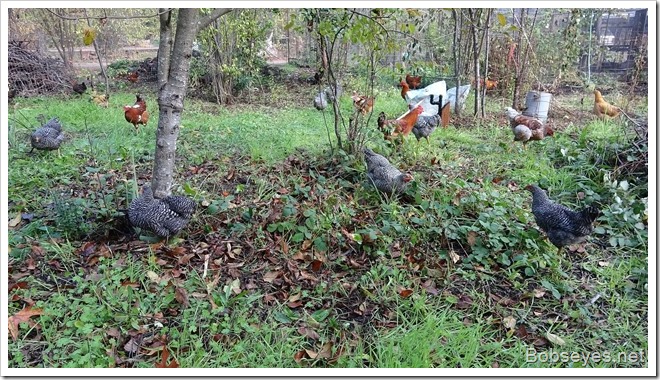 The chickens are supposed to start laying eggs at around five months old which was on 11th of this month, but so far no eggs. However the roosters are starting to crow a bit.

This is Carmelo. He’s what I call my default rooster as I only have one of his type so he’ll likely be the last rooster left in time. If he behaves himself at least some, he’ll be the one. So far he’s doing good. 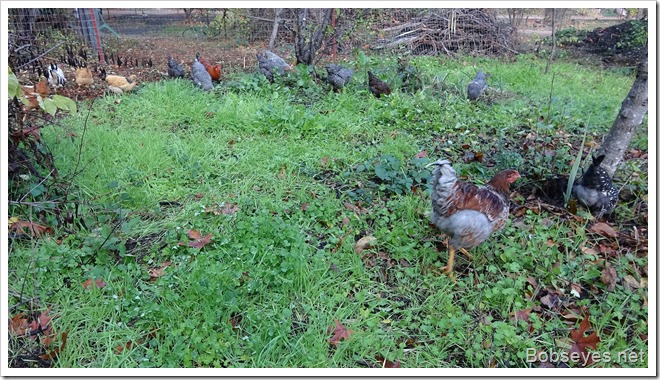 The day went by and my sore back wasn’t much better. I’ll just have to deal with it and work a bit slower and maybe a nights sleep will help.  :O)

That was my day

(Visited 119 times, 1 visits today)
This entry was posted in Uncategorized and tagged chicken grazing pen, Sore back. Bookmark the permalink.