A bit of weather today

It was supposed to rain this afternoon sometime and the wind seemed to be up.

Seemed like a good day to do some shopping for materials I need for some projects I have planned.

I loaded the 2 inch steel pipe I made on top of the van and made sure I had some steel wire and some rope and wire cutters.

Ordered up the master cylinder

But before I left I got on  the phone and ordered a master brake cylinder for my Toyota LandCruiser. I used my Master card for the first time in awhile. Good that’s on the way.

I drove on over to Freeman Brother’s Hardware in Santa Rosa. Drove into their yard and parked by the rebar. I had to walk around a bit to find a guy with a forklift. I told him I would unload the 2 inch pipe and we’d wire the stack of rebar to it and put it up on the van with his forklift.

He counted out forty pieces and I double checked him and he had it right. We wired the bundle together and tied the pipe to it and up it went.

I tied the bundle down good with steel wire and some rope.

Checking under the van for leaks

About this time I checked under the van to see if there was any fresh radiator fluid from a possible leak I noticed the other day. I’d found a loose hose clamp on the overfill tubing which had been leaking and had tightened it up, so this was a test.

The ground was dry, no fluid so that must have been the problem. With the loose hose it wouldn’t have sucked the hot fluid back into the radiator which solves another problem I was having with low radiator fluid. Now I know why.

I was going to check the ground  under the van one more time when I got home, but it was raining.

Picked up some lumber

I then drove over to the lumber section and loaded some lumber. I was able to just tie the lumber down to the rebar bundle with some smaller rope so that went easy.

I next went inside the store to buy some spray paint and some bolts and a few other things like some hinges for the rebar gates.

I was going to go to some other stores and get some stuff, but after looking at how my load was sticking out the back of the van I decided to head straight for home.

It started to rain as I was driving home so when I got home it was raining too much to unload, so I had a bit of a break instead and got something to eat.

They cancelled my card

The phone rang and it was MasterCard asking if I’d used my card at a certain place which I had not, although today was the first time I’d used it other than at Amazon. So they canceled that card and I’ll get a new one. I have several Amazon shipments in the works, so I wonder what the cancelation might screw up? Oh well, just have to deal with this kind of stuff.

The rain let up after an hour or so, so I went out and untied the load and unloaded it all.

Here’s the van just after the rain and ready to be unloaded. You can see where the 2 inch pipe has supported the ends of the rebar. It’s especially important when bouncing down bumpy back roads as the rebar ends can really get to bouncing around if not held down. The weight of them can be quite destructive. The pipe worked out well. 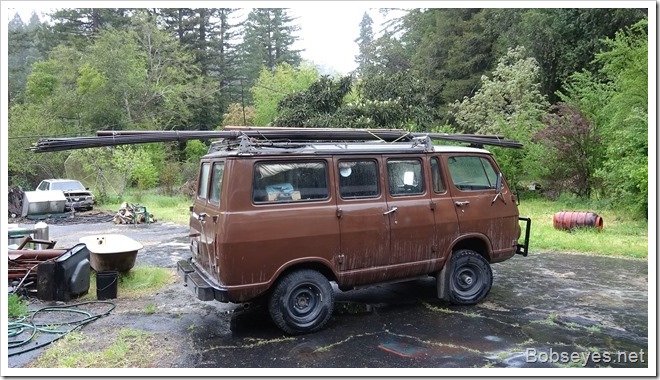 It started to rain again just a little before I was finished, but I finished anyway only getting slightly wet.

Now I have lots of stuff to work on some projects. At least enough to get started.