Windy, Rainy, No Power But a Big Storm Can Be Nice

It was raining a bit when I got it going today so I stayed in bed a bit longer. When I got up it was still raining but I went out and fed the chickens.

It looked like an inside type of day so that’s what I did.

Played with my cameras

I bought some paint the other day so it was a good time to paint under the kitchen sink where I repaired the drain water leak the other day.

I got the paint out and the tools to do the job. Taped it off and got it done. I’ll give it more coats as it dries. 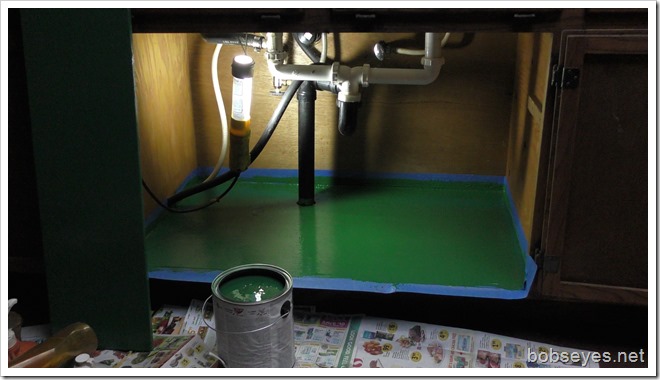 I spent the rest of the day messing with my cams.

Stormy and no power

Just after dark the power went off as big winds were blowing down here in the valley which it doesn’t do often. It means the wind was really blowing up on the mountains.

I heard some big tree type cracks as branches get blown off the big redwood trees and fall to the ground. I heard one especially close but all seemed well except no power.

About 8 the power came back on so I fired up my computer, but fifteen minutes later the power went off again.

I saw some lights flashing across the way where there are some power breakers in the power lines that go up the canyon, so I put my shoes on to go have a look. I checked my brothers place to see if any big redwood stuff came down but none did. Just as I got to where the power guys were they drove off so I headed back home. The wind was still blowing away and it was raining some.

Lights in the yard

I saw some lights moving around in my yard which turned out to be some neighbors checking things out so we shot the bull for a bit. When they left I walked out to my main gate with them and saw where a bunch of big branches broke off one of the redwoods in my driveway. I took some pics but they didn’t come out as it was too dark.

Do it on the laptop

Back in the house still no power so I fired up my laptop and started writing this blog.

Big storms can be nice

It been a number of years since we last had a big storm here so this was nice. :O)

The wind is still blowing but not as gusty as earlier and it’s raining lightly at the moment. Still no power but that’s ok as I’m prepared and can start the generator if I wanted to but no need.

So tomorrow one of my projects will be to get the chainsaw out and cut up those big branches for firewood.

Around 9 I went out to see how the chickens were doing. I found them all wet and could see sky above them. Looks like a couple pieces of my metal roof blew off so I pulled them back over the chickens. I had it on my list of things to do to finish fastening down the ends of the chicken pen roof but never got around to getting it done as they wind doesn’t blow hard in this valley much. One end did have screws but they were all pulled out. Another project tomorrow.

And that was my day. Nice storm.

The power came on this morning after a day or so off so I couldn’t publish blogs.