Windy and Cold and Blowing Up the Jetty

Looks like the wind is going to be up today

The weather guys said it was going to be windy today down at Jenner.

Having nothing better to do, I headed on down that way to see for myself.

I backed onto the boat ramp and got out and I could feel the cold wind coming off the ocean, so I decided to forget about kayaking today. The wind was about twenty miles an hour and cold. I can handle the wind, but not with the cold. 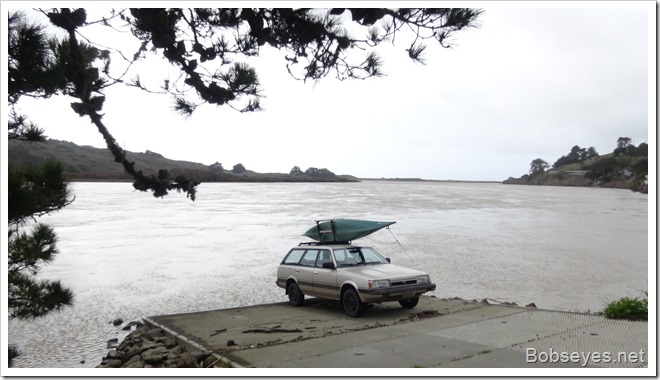 So, instead I went into the visitor center to chat with whoever was in there volunteering. 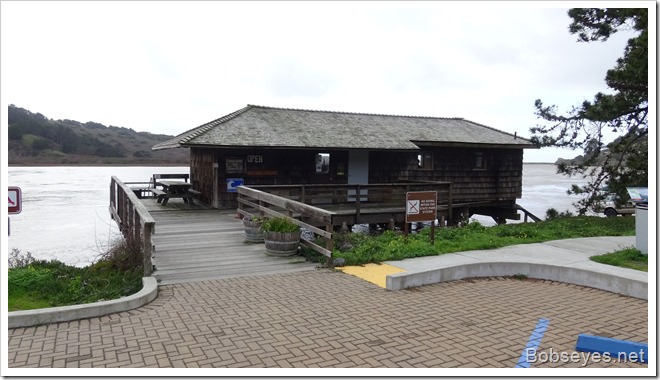 I found Carol in there who I know but hadn’t seen around for quite some time. 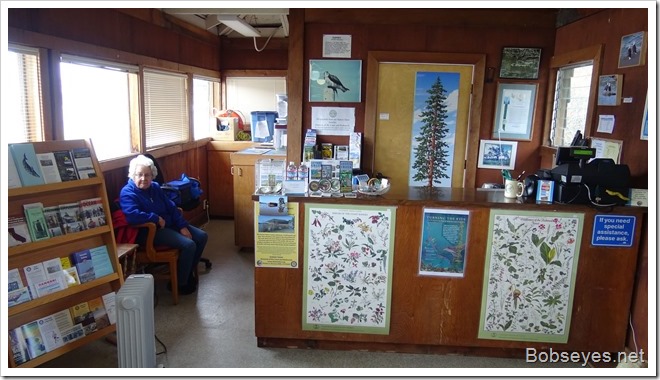 I shot the bull with her for quite a spell.

This is the other half of the center. 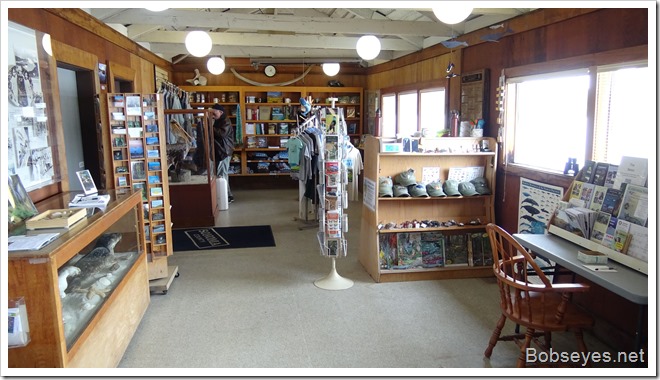 Eventually some visitors came in so I left and drove to the overlook down at the mouth on highway one, just past the town of Jenner.

Still lots of muddy water coming down the river from the recent rains. This is the open mouth where the river goes into the Pacific ocean. 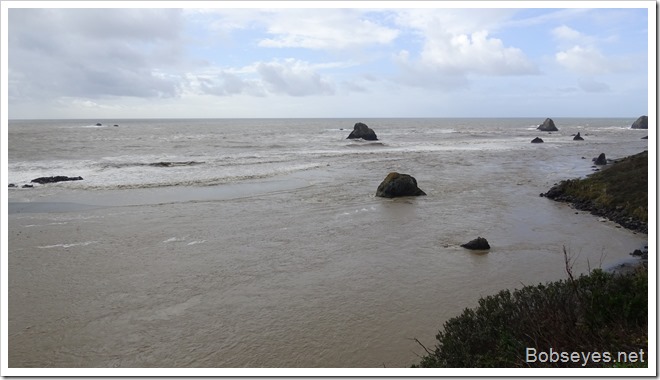 This is looking south towards Goat Rock which you can see down that way. 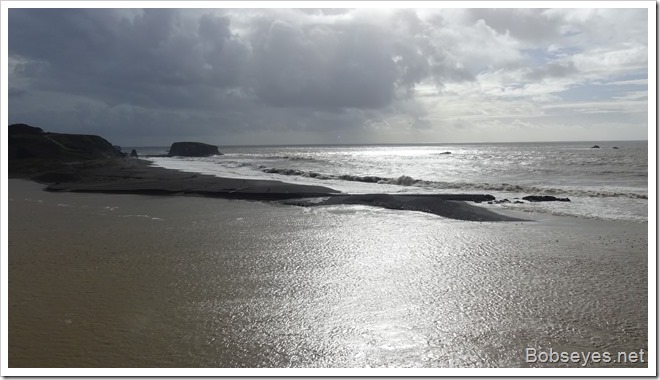 This is the jetty with the waves breaking over it as the ocean was fairly rough today. 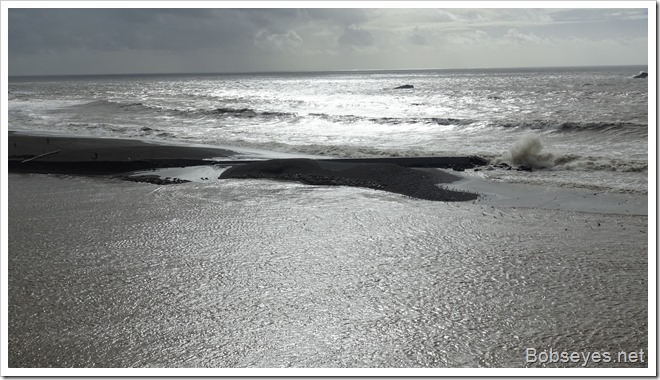 The seals are in a spot where the ocean waves are breaking over the sandy beach. 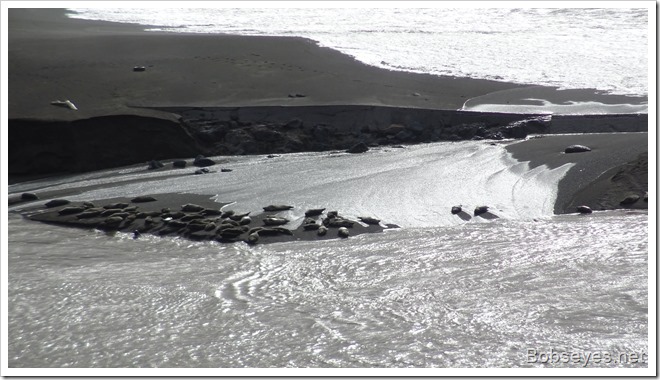 I looked at the jetty to see if the big block of cement was gone yet or not. It’s moved recently from the rough ocean waves and soon will likely be gone as the ocean is slowly taking the jetty out, a little at a time. 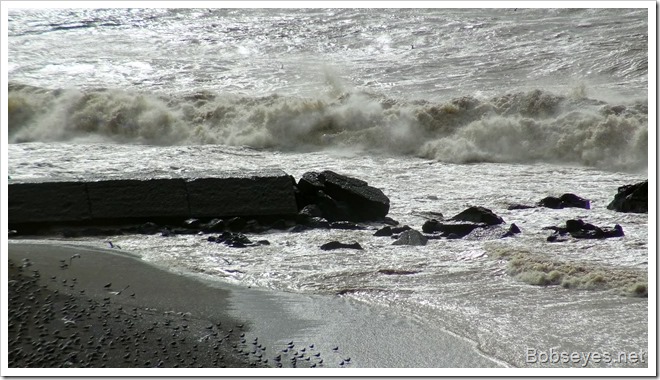 You can see the last segment of the jetty as it was at the start of the winter. In the picture above the cement has falling a bit, see the tilt. 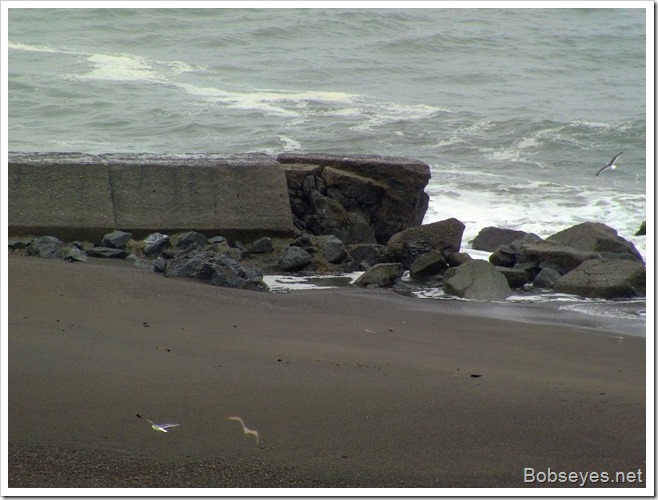 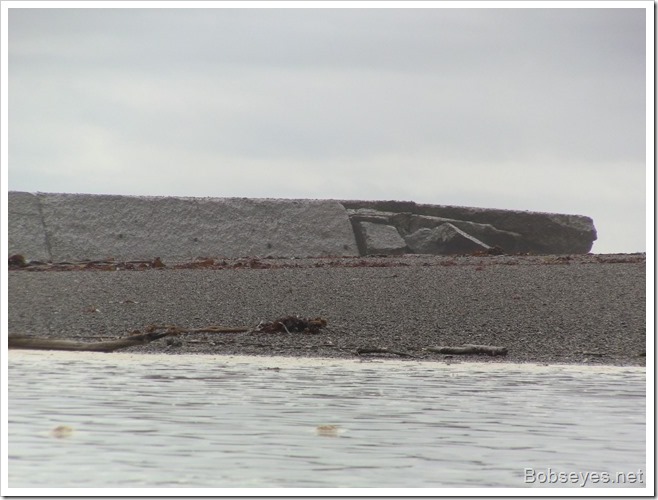 Which brings up a point. There’s been talk about removing the jetty and letting the river do it’s natural thing, but the cost to remove it was something like five million dollars or more and  doing so would likely destroy the  road going down to Goat Rock from the heavy equipment needed to do the job.

But why not do it more cheaply. I have an idea to do that from thinking on the subject.

Low cost and effective jetty removal, blow it up

The ocean gives a clue. The cheapest and likely the best way to accomplish removing the jetty is to just blow it up.

That sounds rather dramatic, but if a small section was blown up at a time, there wouldn’t be much bang as if done right all the bang stays in the cement to crack it up. Once it is in smaller pieces the ocean would just take it out like it’s slowly doing now, but it would go much faster and not cost very much money. If nothing is done, the ocean will take it out slowly, maybe in a  hundred years or so.

This is the best solution I can think of so far.

From there I returned to Monte Rio to check out the boat ramp.

The county had some big dumpsters in the parking lot for those who got flooded to dump their stuff. It’s also available for people to  just get rid of any accumulated garbage. It’s a good deal as everything that goes into the dumpsters stays out of the river. 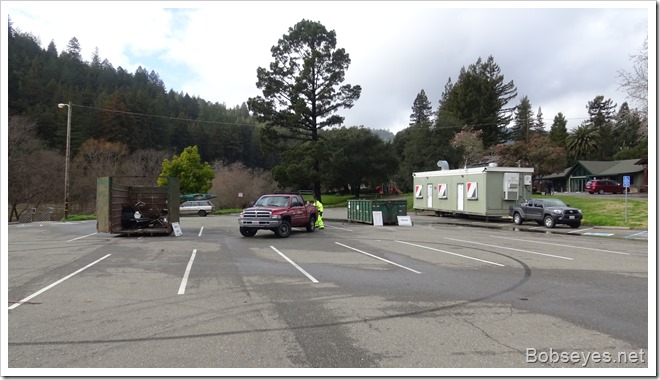 The boat ramp is still completely under water.

These are some of the friendly ducks that hang out in this area waiting for someone to come by and give them something to eat which a lot of the locals do. 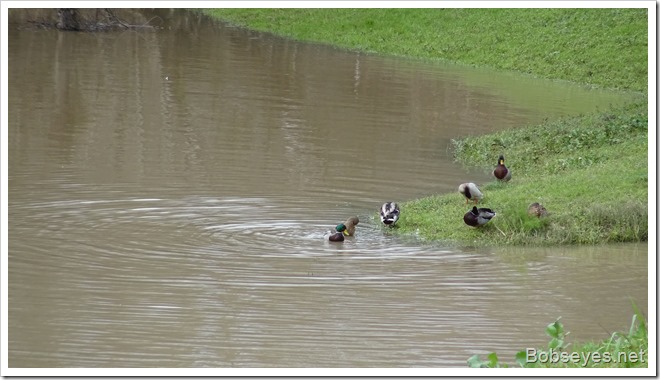 The only guy fishing on the river right now

I saw Bill fishing over by the Monte Rio bridge so I went down to shoot the bull with him for a bit. He said he caught a hard head fish yesterday, but so far today nothing. 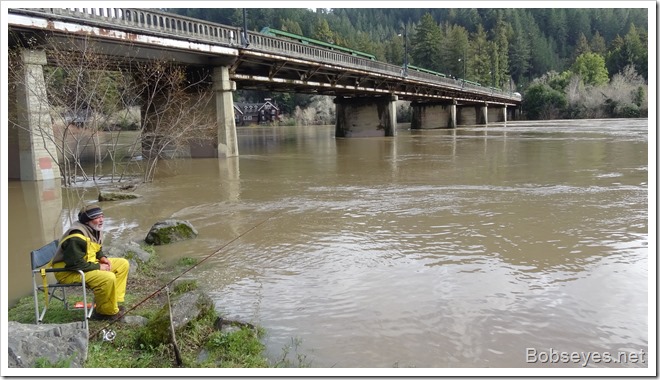 I left him hard at it and drove on home.

Getting the mail and fixing the gate

I might do that if I have nothing better to do, eventually. The rollers just need to be drilled out and tapped for grease fittings. His girl friend would like that, I bet. :O)

The cat and I

Other than that, the cat and I are getting to know each other. It’s a good cat which mostly tries to be good which is rare for a cat as they usually just act like cats. :O) Last night I heard some cat screams outside the back door. Seems there’s another cat around that’s been coming into this cats territory. Seems this cat is winning as it’s not torn up or anything.

And another storm coming in

We have another rain storm coming in this weekend then we get a break. The river is getting near to flooding again, so it will depend on how big this next storm is. Nothing worse than living in a flood plane and getting flooded out more than once. No problems with flooding for me, but those that live on or near the river might get it again.

1 Response to Windy and Cold and Blowing Up the Jetty