Time to do some catching up here. I’m parked near Maggie’s Summit near Mountain City Nevada for a  break and to figure out what I want to do from here.

Saturday I left the Willow Creek Reservoir and headed east to Tuscarora where I took a left and drove up into the mountains there.

Here’s the road I drove to Tuscarora headed northeast. 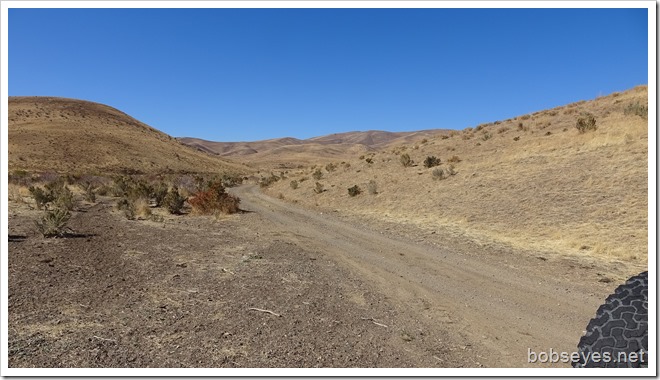 At Tuscarora I turned west and drove out up into the mountains as I’ve never been in this area. The road went up to the top and over the other side.

This is what it looked like driving up the hill. 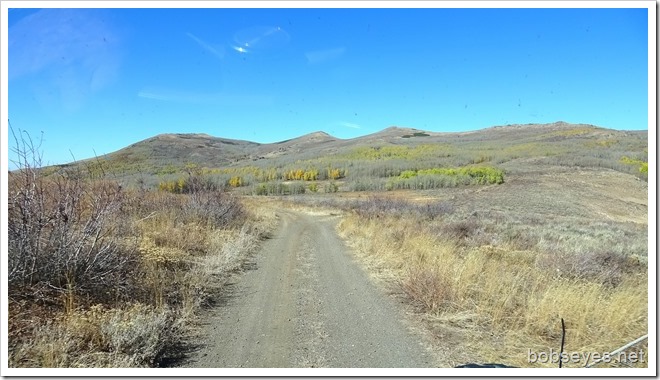 I was curious which road went through from the top as I was trying to get to this area on my last trip from the west and I went up Rock Creek but got turned around at a washout.

This is the road I should have been on called Toe Jam Creek Road. I followed it down a short distance to have a look. 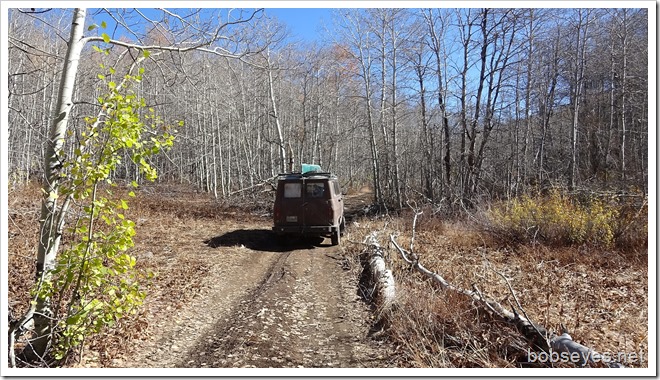 It’d snowed here a couple days ago, just before I got into the area. 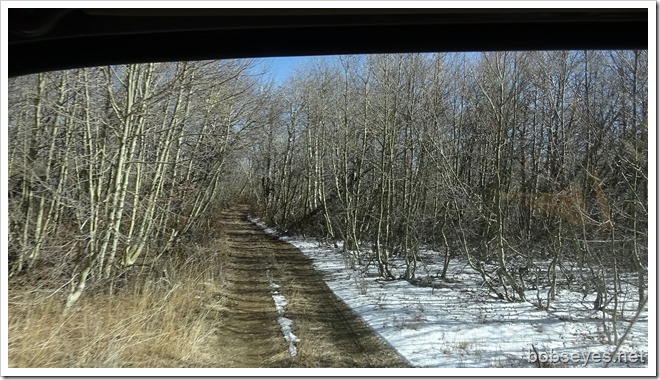 There was some rough stuff but not too bad. 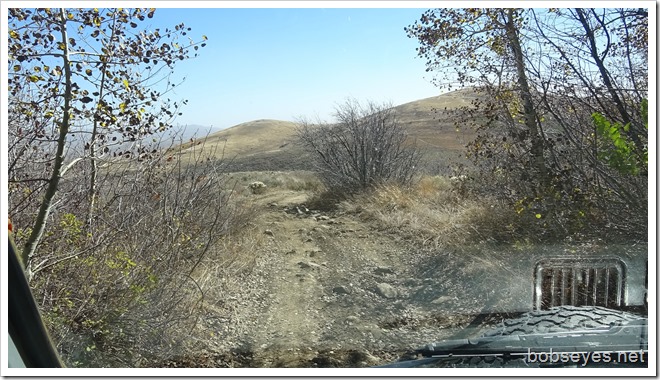 I met some people up there in a side by side. They’d rode over from Midas, so now I knew the Toe Jam Road went on through.

I decided to go back down the mountain on the road I came up and camp by that cabin down there about center. 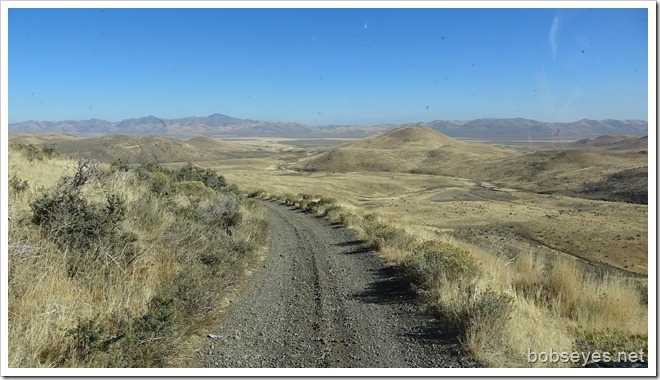 I’m getting closer to the cabin here, see it? There’s a little creek running by it. 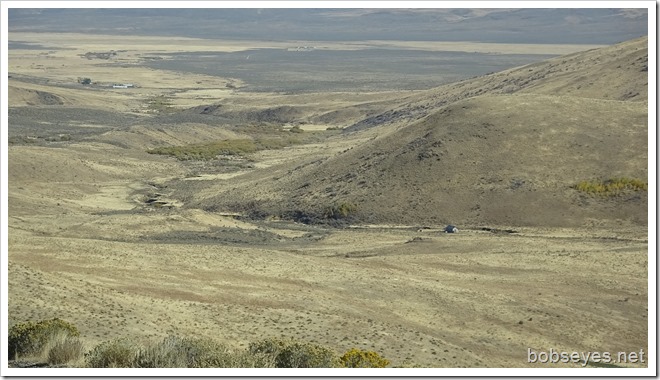 When I got to the cabin I got out to check it out. It turned out to be an old mining cabin that still had all it’s furniture, but hadn’t been used in quite some time. 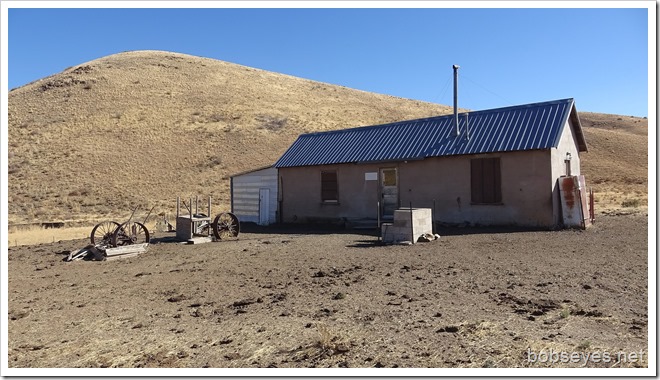 The cabin turned out to be used for mining as there was some stuff around for mining but the tunnel was caved in. They cave in tunnel entrances when they are done mining to keep people out and safe. 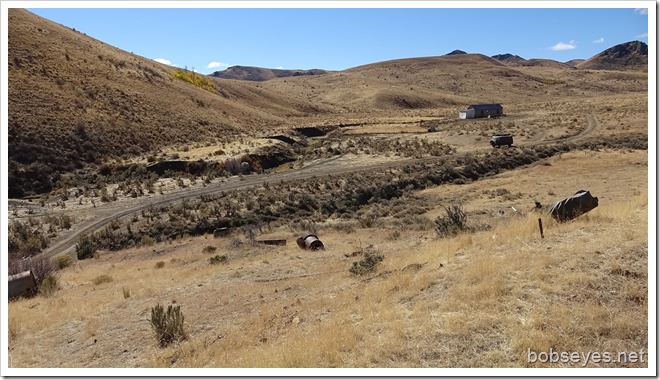 I camped along the creek just above the cabin.

Checked out the mining area

The next morning on the way out I walked around the mine to check it out.

And headed to Tailor Canyon Saloon

I was headed for this place called Tailor Canyon Saloon. I was hoping to talk with Bubba who helped me with my bum tire the last trip. But the place was hopping so I knew everyone would be too busy so I drove on by and up to a mining area above it fairly high on the  hill. 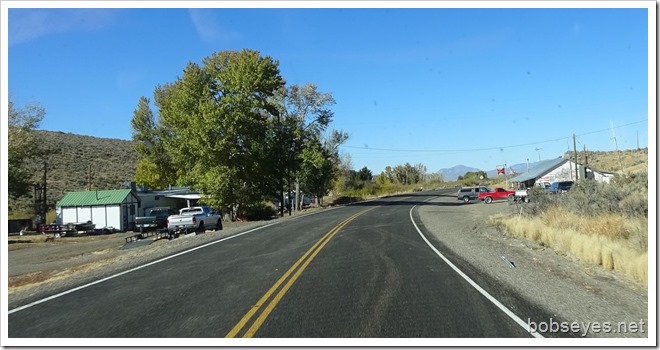 Checked out this mining area above Tailor Canyon

This mine was abandoned pretty much. It had big huge steel slab doors to block it’s entrance. 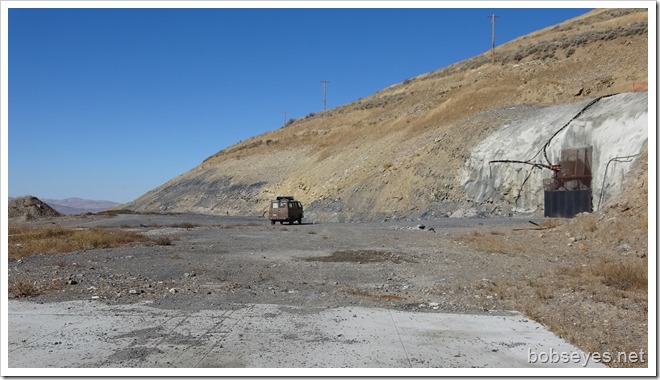 I thought about spending the night there but it was too early in the day so I drove back down to the highway and headed towards Maggie’s Summit a few hours up the road.

Most of the cattle are down in the pastures for the winter. 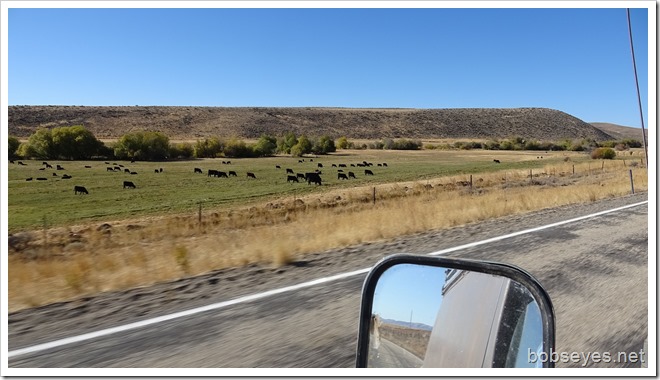 I decided to stay here for the night and maybe do a walk up to Bull Run Reservoir which is off to the left. My camp is just across the creek where the road starts to the reservoir. 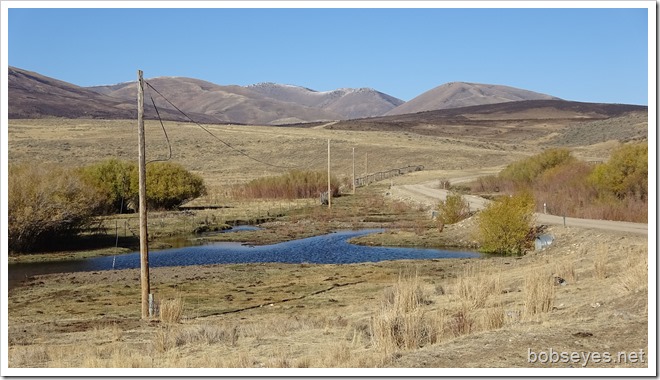 I was thinking about doing the walk to the reservoir in the morning but still had enough daylight, barely, to do it today. So at five I started off to the reservoir up by the mountain base there. 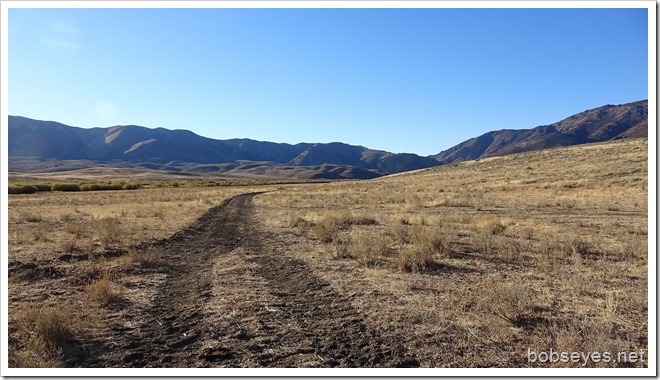 I walked over this road to the reservoir which is down in the canyon to the left. 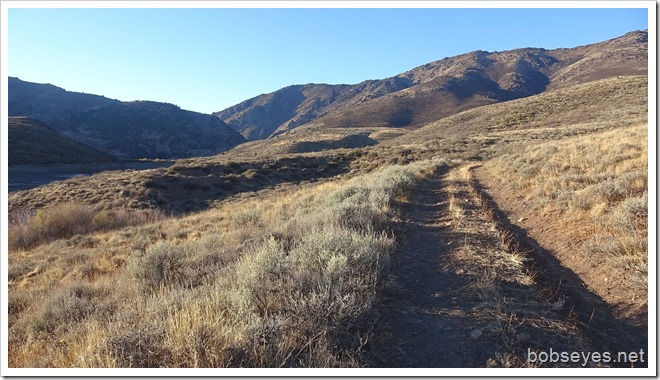 And the reservoir was mostly dry

It was a mile or so to the reservoir and it was mostly empty and the sun was going down. 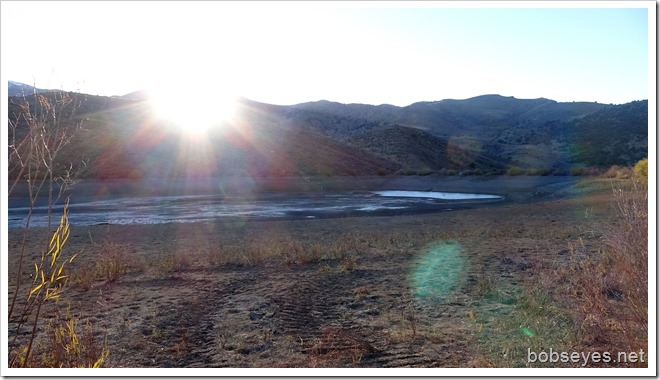 I ended up walking to it’s far end where the dam was which added about another mile in.

This magpie flew over near me to have a look. 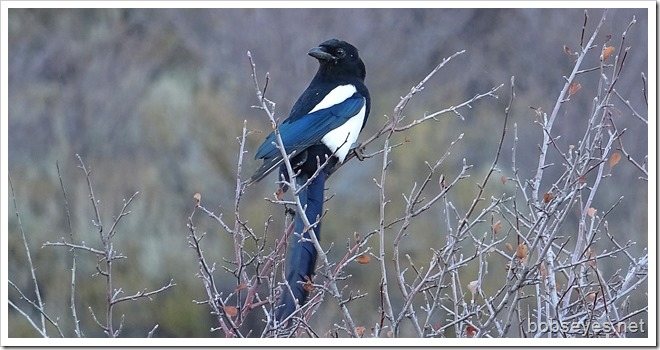 With the sun going down I needed to start back so I did. It was mostly easy walking. My van is parked somewhere in those low hills up ahead, not in those snowy mountains luckily. 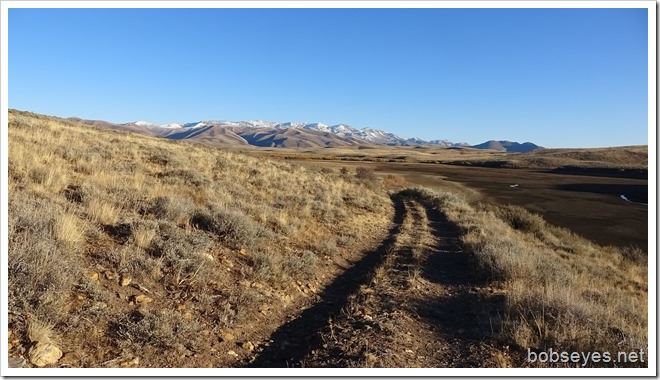 Not too far to go and I’ll be back to the van. 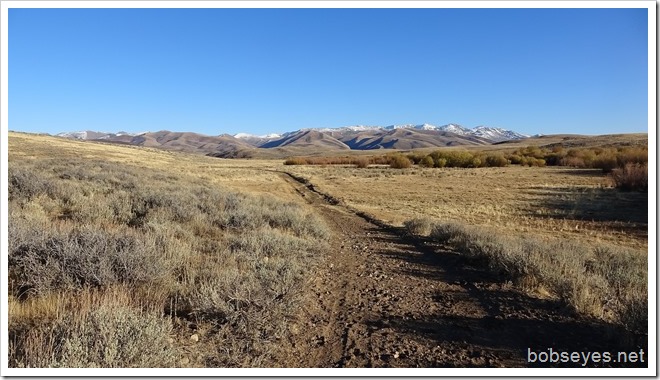 Camp spot for the night

I’m almost to the van, see it. This is where I spent the night and it was cold. 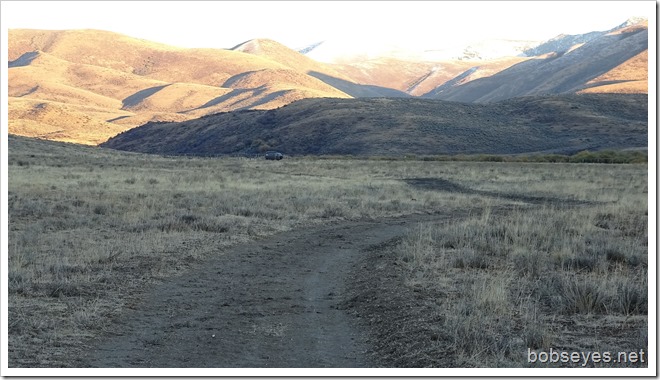 In the morning I took my time getting it going as I’m not in a rush to be anywhere particularly and besides it was cold out.

I’m headed for the Duck Valley Indian Reservation eventually to get gas and post these blogs.

Right now I’m taking a break by Maggie’s Summit and deciding what to do from here. I’m thinking I might drive over to the town of Bruneau which is north of the Indian Reservation and I haven’t been to this town before but it looks interesting on the map.

Either way I’m headed to the Duck Valley Indian Reservation for gas and to post.

I’m at the Duck Valley Indian Reservation’s IT lab by their high school doing internet stuff.

I plan to go visit Joe at the Tire Shop here for a visit and maybe get some drinking water and then continue on to a town called Bruneau an hour or so north of here in Idaho. After that I’m thinking I might go to Davis Creek in Modoc in the northeastern part of California to visit some locals from my area that have a hunting place there.

Not sure where I’ll be able to post from next so stay tuned.