Why I Told the Barstow Owner He Was a Special Person

I’m not sure where I left off on the van’s weird brake problem.

They finally figured out that this rubber brake line that goes to the wheel had a problem. It appeared that the line had a check valve in it. Apparently a piece of the inter runner tube had broken off at one end and was acting like a check valve not letting the brake fluid go back when the brake was released. I think the line was an original from when the van was made in 1967. 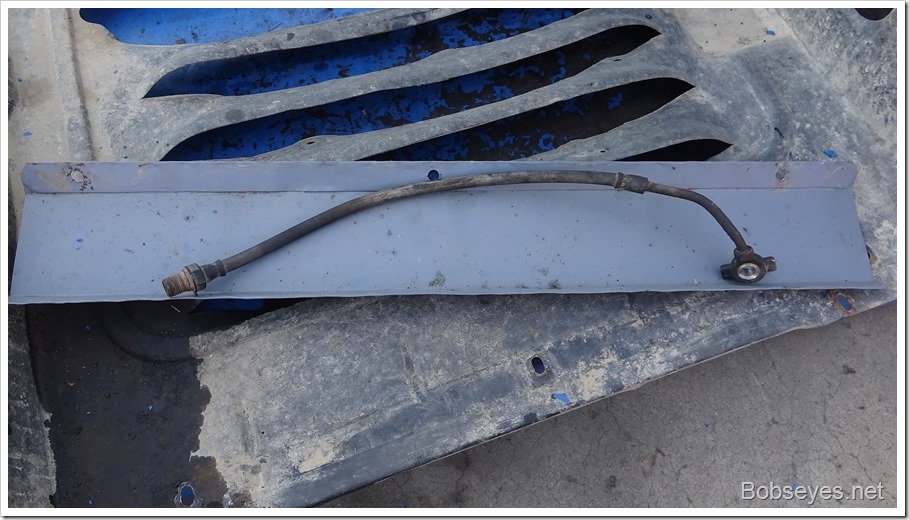 This picture is of the owner and his worker getting the van back together after the new brake line arrived this morning. 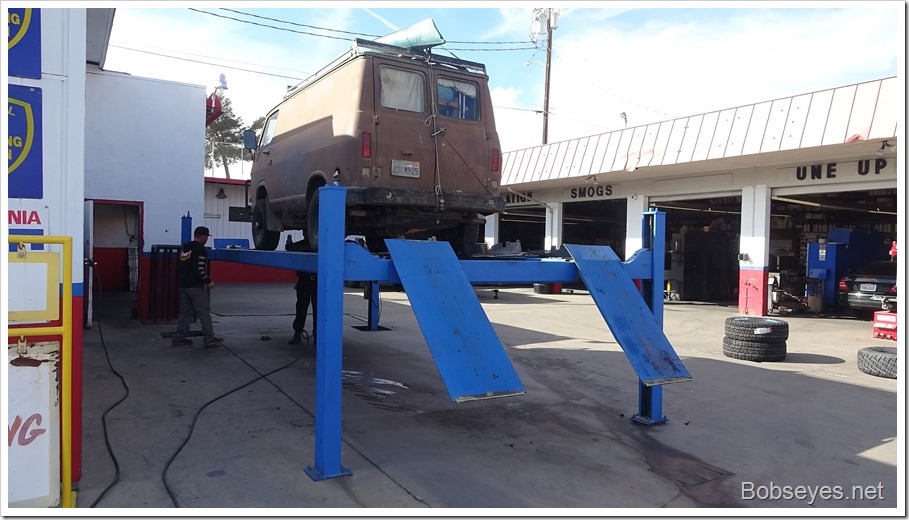 They got it all back together then they asked me to drive my van off the rack.

While doing this I noticed it still had the drag. Oh  no, how was I going to tell them  this after all they had done,………………But.

When I got out of the van I noticed my emergency brake was on. I  need to put a light on it as I seem to be forgetting it a lot lately.

So I went in to the front counter to pay my bill. The owner had said he was going to reduce it down some. The truth is I was here three days and they  had about a thousand dollars of parts and time into it as far as I could tell. So what was it going to be. The counter guy and the owner went back and forth reducing the charges down.

So what was it

He ended up charging me for the three parts and only one hour of label. What! I was expecting something like that, so my plan was to kick in 200 more bucks and I was still ahead and glad to get this fixed. I like to be fair too.

The guy at the counter said he enjoyed my company and stop back in if I was going by and the owner said the same thing.

So now I wanted to thank the owner and give him a special compliment which I did but in  doing so I didn’t explain the real reason I wanted to do that and it had nothing to do with the low bill and this is the part I want to explain hoping he’ll read the blog on it.

I found the owner  Robbie in the parking lot and explained I wanted to thank him and to pay him a great compliment but I’d have to tell him a story but I’d keep it brief. That didn’t really say why I said what I did so I’ll elaborate on that now.

So here’s the story

Several years ago I was out my myself in the desert near the Duck Valley Indian Reservation and I got a flat tire and needed some help.

I knew of a tire repair place on the reservation at a guy’s home that I’d used a long time ago so I  headed there. He  wasn’t home but out cutting fire wood and his wife said to come back in the morning and he’d take care of me.

So the next morning I pulled into his place about 8 and knocked  on the door. The guy, Joe I think it was, came to the door and didn’t know me. The guy I went to before had died and Joe took over the place.

Here’s where it gets real interesting. Right off the bat Joe starts telling me four or five stories of how he just knows stuff. For instance one of his stories tells of when  he and his wife were out driving and  came across a big car wreck. Joe knew instantly that a good friend had died and that’s how his stories went. He just knows stuff.

And then he looks me in the eyes and says, You are a special person. What? I was blown away. I think about what he said once in awhile as I age and his meaning is slowly sinking in.

I tell Robbie the story and say, You are a also a special person Robbie.

But that doesn’t really tell the reason I called him a special person.

So here’s the main real reason I said that and it had nothing to do with the price.

When I arrived at Bartow Tire and Brake on the back of a tow truck no one knew me, nor I knew them.

Right away I noticed his employees were not what I call Rat-racing like  most places these days. That’s when the guys have time limits and are rushing around trying to get the job done, which is bad for a lot of reasons, the main bad one for customers is they are more app to make more mistakes rushing to get the job done in the limited time they have.

Because of that I’m able to get to know some of the mechanics and sho0t the bull with them. My old van attracts a lot of attention which helps too.

So I stay over night in my van in the parking lot and the next day a guy shows up real early a couple hours before opening time, which I suspected was the boss opening up which it turned out to be, Robbie.

Some of his workers showed up before opening time. And there were some locals showed up for coffee, one was the x-mayor. Interesting locals would come to the shop for coffee early in the morning and workers showing up before work time. This is not a normal thing in our day and age, so I take note of it.

There’s quite a few stories I could tell, but here’s an interesting one.

I’m sitting in their waiting room listening to the war news when this old lady walks in, looking like she’s been around and has a little goatee even.

The counter guys are busy talking with customers and there is a line.

She walks right up to the counter end and stands there for a minute or two.

She’s getting impatient and puts both hands on the end of the counter and then the counter guy Nick stops what he’s doing and says to her. I guess you are here for your cigarette as he’s a smoker. So he opens his pack and gives her one.

She puts it in her mouth and starts to light it up. He says no, not in  here, you know better than that. She says, I was just testing you.

She goes outside and sits on the front bench and lights it up and has several puffs and puts it out and then opens her Burger King lunch and eats it, then finishes things off relighting her cigarette after which she puts her garbage in their trash can and leaves.

I’m curious so later in the day I ask the other counter guy what’s going on with that.

He smiles and says that’s Barstow’s Crazy Carol. She’s a little off and has been doing this for quite some time and for some reason believes this is how it’s supposed to be and expects it.

All this just wouldn’t happen if it wasn’t ok with Robbie the owner. I give him more points.

I spend three days there observing things like this and being treated well by a lot of friendly employees. All of which could not happen without Robbie’s approval. And Robbie treated me more than fairly the whole time trying to keep costs down.

I’ve thought of this off and on since then and Joe must of seen something in me which is beyond me.

So now that I was designated a special person I needed to be a special person and had the right to designate another person the same.  Robbie is the only person to date that I’ve felt like doing that to, likely just like Joe thought that of me. At least I had the time to get to know Robbie some before stating such a thing unlike Joe that said it without knowing anything about  me.

I really hope Robbie reads this post as he’ll understand better why I said what I said.

So I made it ok to Quartzsite yesterday and am staying at Marty and Patties for a bit, just setting in after the long trip down here.

I can smell propane so I  have a leak I need to find.