Yikes chickens in my living room

This morning at 5 I heard the roosters crowing in my living room, but how the heck did they get in there, two gates and a door. I got out of bed to take an unbelieving look. Sure enough they were crowing in  my living room, nice and loud too.  But where were they? Hummmm, sounds like they may be on the back porch so I headed in that direction. Boy were they loud.

Just about that time I realized the crows were coming from my computer.

OK I messed up

OK, I was watching the mice in the chicken pen last night with my new PTZ camera on my computer and had turned the sound all the way up to see if I could hear any mouse noises, but didn’t.

When I went to bed I forgot to  turn that microphone off and when the roosters were ready to do their thing this morning they let me have it.

That solved that mystery and I went back to bed as that hour is way too early for me as I’m up most of the night messing with stuff.

Off to kayak for the day

I got up an extra hour later this morning and got my stuff together to go kayaking.
Before I left I fed the chickens and checked their water. Good to see them all in their pen where they belong. :O)

Suns out at Jenner

I headed on down to Jenner to kayak for the day. The sun was out and the wind was down when I arrived so I put my boat in the water and decided to paddle up the river as the mouth area still had swells coming in it just like yesterday and I didn’t feel like getting sick again. It was also high tide just like yesterday so big waves were breaking into the rivers mouth causing the swells in the river.

Seals are on the hunt

I noticed right away there were a lot of harbor seals hunting in the water and about a half dozen sea lions too. I assume they were hunting the big fish coming into the river to spawn, but I didn’t see any fish taken by them. The water is still fairly  muddy so hunting should be quite a bit harder with these conditions. It could be they were hunting some other fish but with the half dozen sea lions hunting too I doubt it.

This was my view of the river heading up along the upper end of Penny Island. 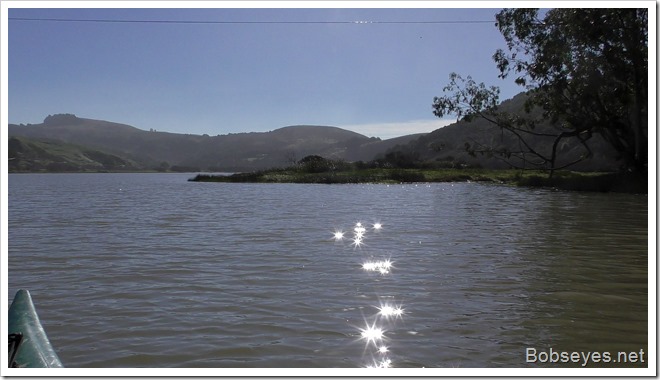 I was paddling into the sun as I paddled along and went by this egret fishing along the river’s edge. 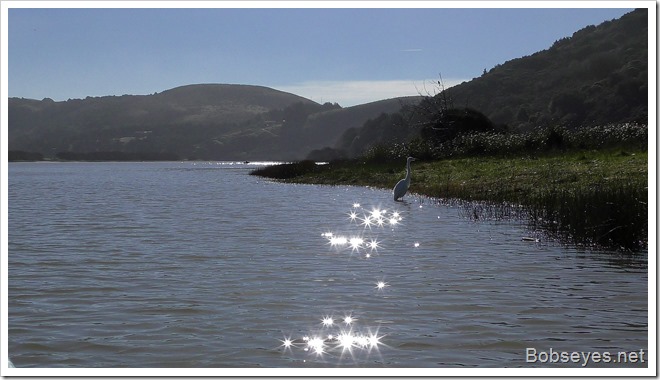 Here’s one of the harbor seals resting on this old redwood log. 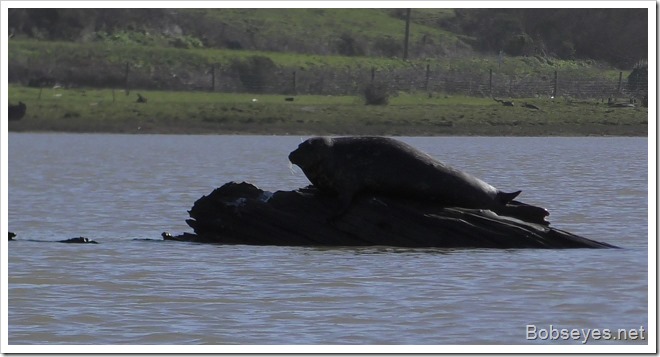 Like I said the wind was down as I paddled along here taking my time. 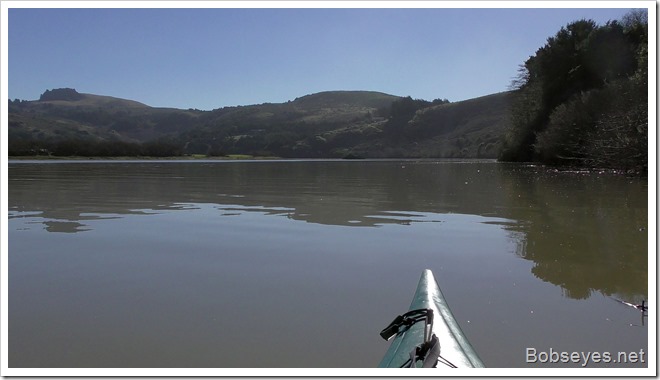 I backed into this spot for a sit to watch things. I could see some big splashes up the river which were likely seals but they were too far away to make out what was going on. 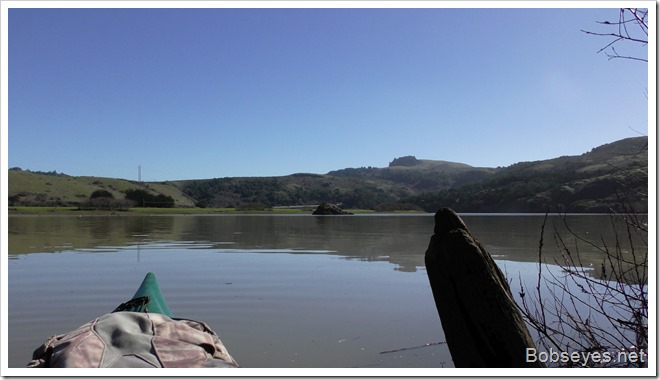 I could also see a small boat up ahead with some guys standing in it. They were slowly moving my way so I waited for them to see what they were up to in my estuary. :O) 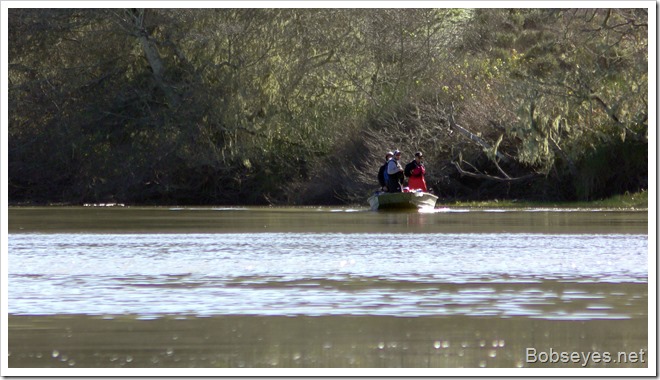 They turned out to be some biologists doing a survey on what I think he called larval fish which I found out after questioning them are real small baby fish mostly less then an inch. They had a fine mesh net they would throw out to try and catch some of the little fish but they weren’t having much luck.

After they left I thought of some more questions for them like what kind of fish are you looking for which I’d find out later.

I paddled up to this spot which I call Muskrat and backed into the green spot and sat for a bit. 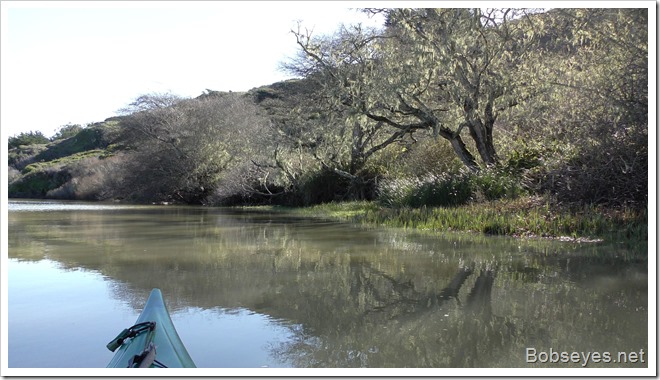 Here I am sitting at Muskrat looking back towards the town of Jenner where I put  my boat in at the boat ramp. 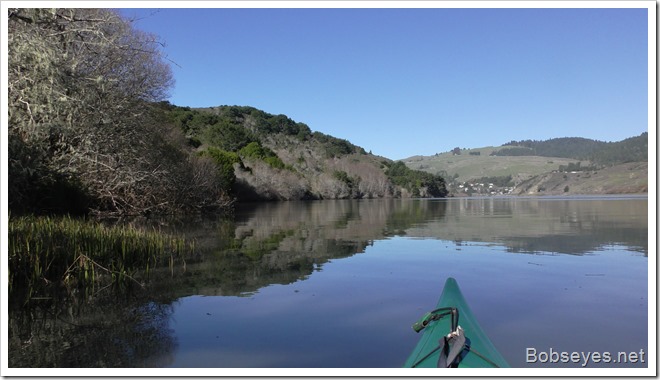 Headed back down river

Eventually I paddled across the river to go down the other side to see what I could see.

This grebe paddled by me. 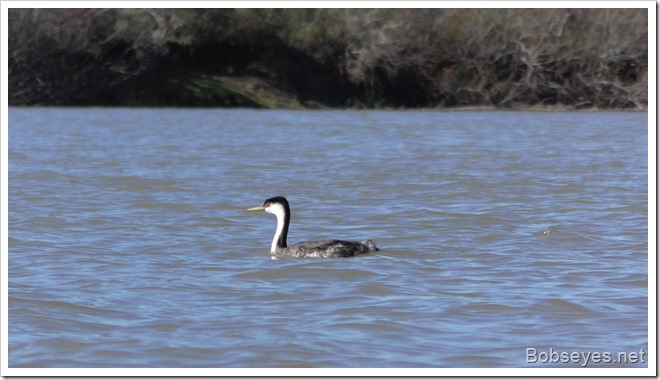 And I paddled by these bufflehead ducks. 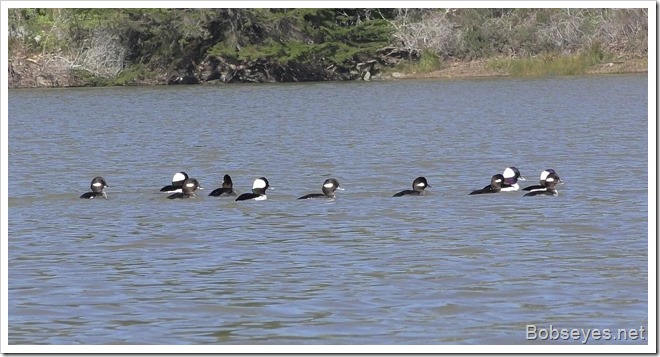 Should I go down by the mouth

I made it back to Penny Island and started going down along it’s edge thinking I might go down to the river’s mouth. 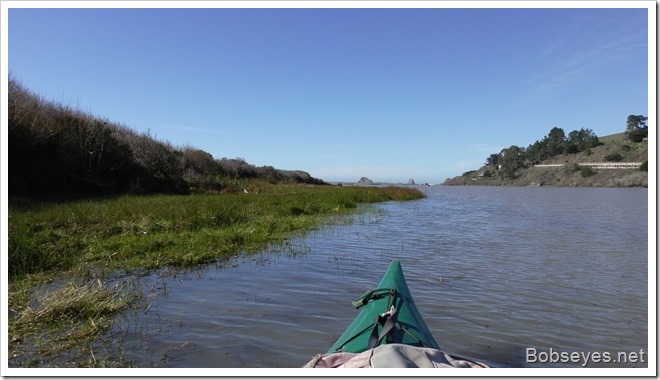 But as I got down near the lower end of the island I started hitting those swells coming in off the ocean just up ahead so I stopped here to check things out deciding not to go any further as I don’t like feeling sick. The guys in the boat were out there casting their net and there was some other type of boat or something to the rear of them which I couldn’t quite make out but it was coming my way. 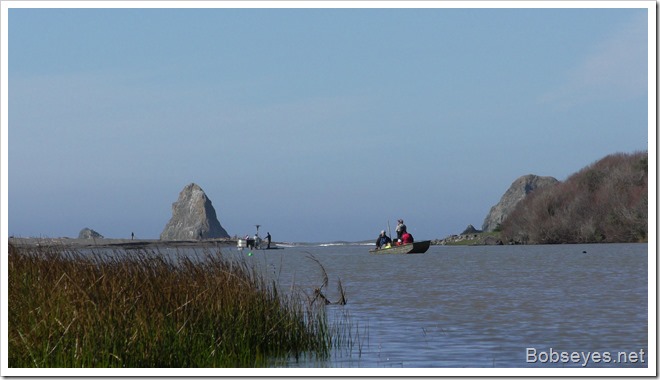 What the heck are they doing

I bet you can’t figure this pic out. :O) 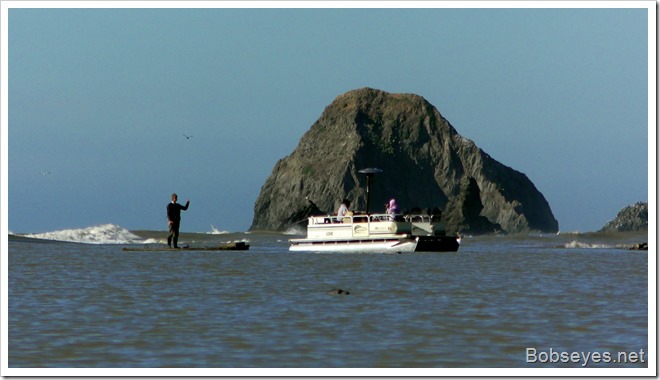 It’s a pontoon boat pulling a guy on Ken’s dock that got away just up the river about a quarter mile. Ken was lucky they got his dock for him before it went out into the ocean. As I remember Ken salvaged this dock a few winters ago as it came floating down the river.

I knew the guy in the pontoon boat so as they were tying off the dock at Ken’s I paddled over to shot the bull a bit. 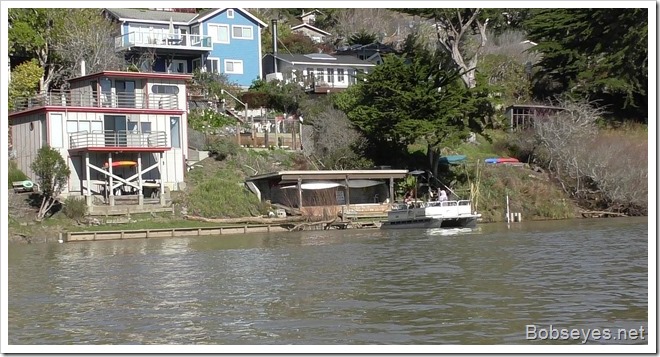 I took a photo of the open river’s mouth with the waves coming into the river before I left the island.  The river’s mouth is where all that white water is and I didn’t get any closer as the swells get worse the closer you get to the mouth and I was already too close. 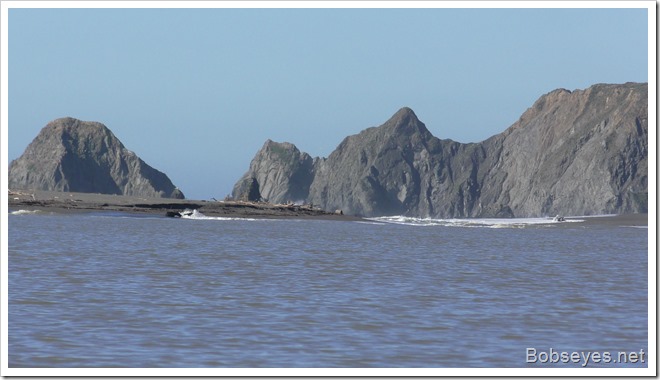 Caught up with the biologists again

At the boat ramp I caught up with the biologists again so asked them what kind of fish were they looking for among a bunch of other questions. It turned out they were looking for larval smelt which come in from the ocean. They were doing this on a lot of the waterways coming down from northern California and were headed to Bodega Bay next. 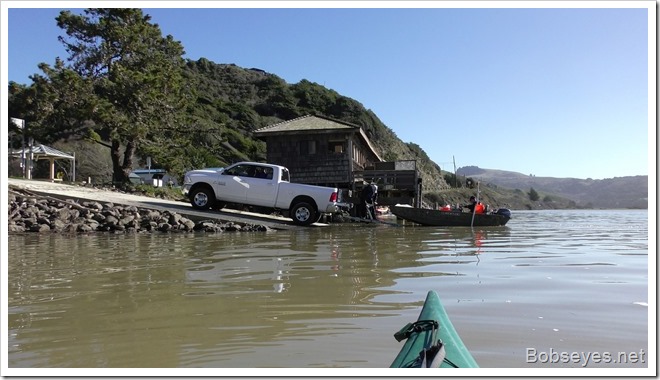 Once they cleared the boat ramp I put my boat on my car and headed for home.

Need openings for the cat

With all the fences I put up in the yard my neighbors cat is having a hard time getting around my yard. I’d like to let the cat go everywhere to help control the little night critters so I need some way for her to pass and not the chickens but they are about the same size at least some of them.

So I found a small board and cut a 4×5 inch hole in it and cut out a piece of fence wire. You can see the door on the right of the gate.  If it’s the right size and works I’ll make a bunch more. Now to get the cat to use this little door. So far non of the chickens have gone through it so maybe it’s the right size if the cat can get through it. 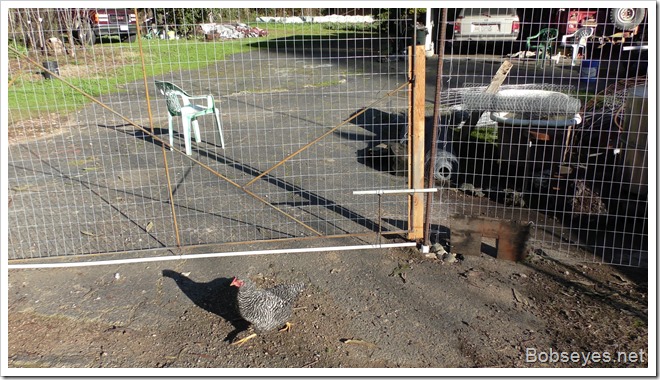 I spent most of the rest of the day just puttering around the yard and enjoying the nice day.

(Visited 152 times, 1 visits today)
This entry was posted in Uncategorized and tagged Kayaking Jenner CA., kayaking on the russian river. Bookmark the permalink.