Well Hookup, Sheep for Chips and Egg Shells For Eggs

I needed to continue hooking up the old well.

I started by cleaning up this stuff and removing all the wires so I could start over. 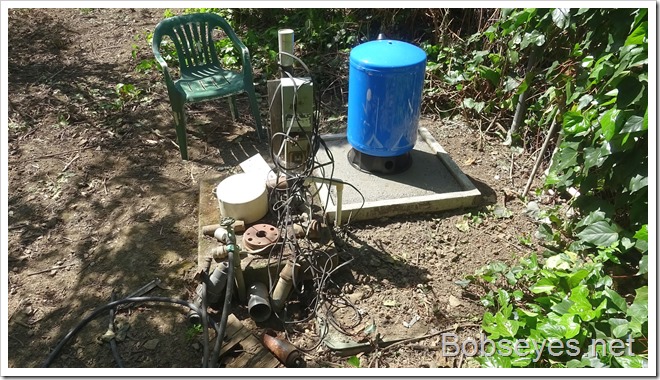 I removed all the wires from this box after making sure the power was off. 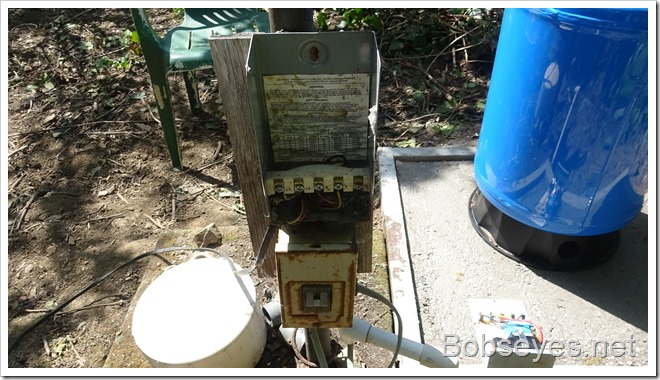 And I cleaned up this well top seal and oiled up the bolts. Maybe a coat of paint would be good. 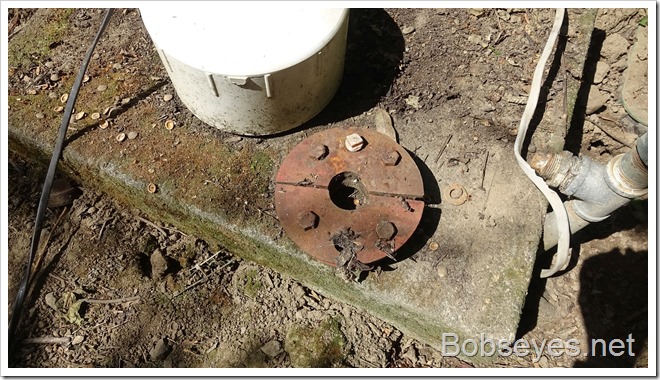 Then I got all the tools and stuff I thought I’d need and put them all in the wheelbarrow to take out to the well area. 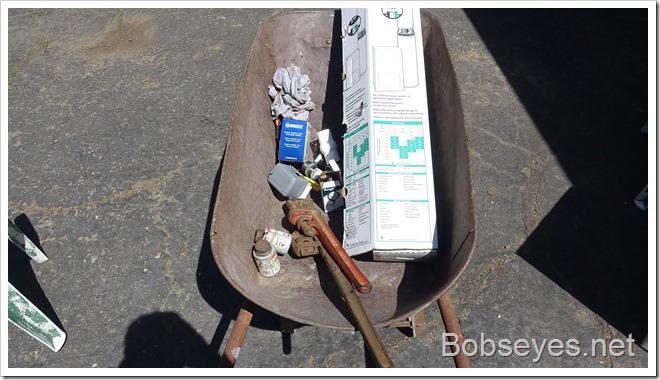 Here’s the new pump. I made a plastic spacer to center it in the well casing and installed it. Then I hooked up the plastic pipe to the pump so I can hook up the wires. 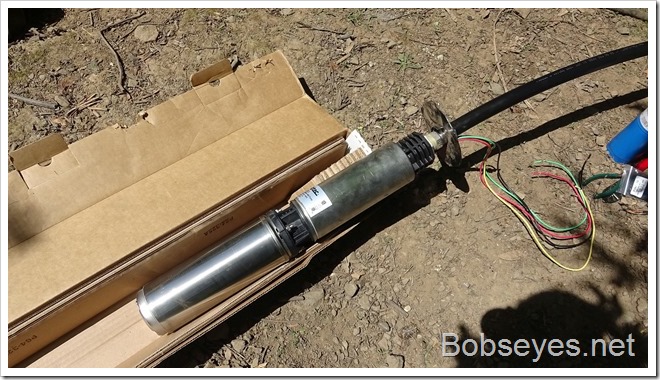 I needed to slice the new pump wires onto the old pump wiring with a water proof splice kit. 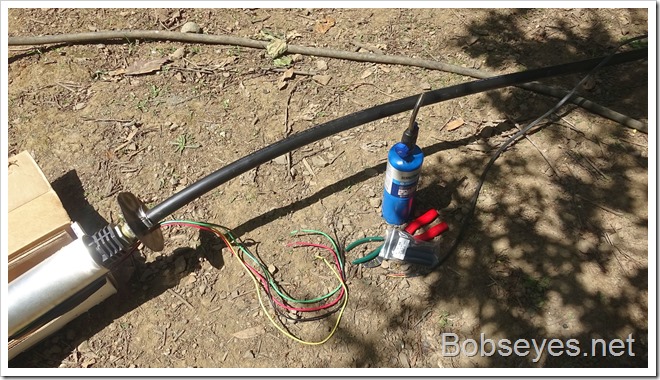 I got the wires almost spliced when I noticed the old well wire had a bad break in it. I thought of getting a new wire and was going to go shopping when I realized I might  just be able to cut the bad piece of wire off and still have enough wire to make the connection. I checked out whether the wire would  make it and it just did so I got it spliced in and used tie wraps to secure it to the plastic pipe. 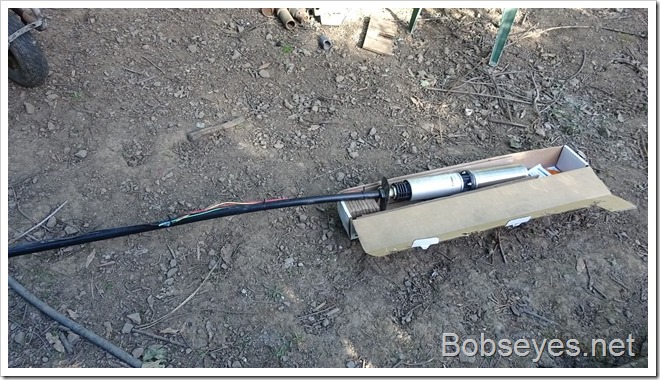 Here’s the finished product. Now I need to go shopping and get the rest of the stuff I think I need to finish up this project, or at least get close to it as I suspect it will take another time shopping to get it all done. 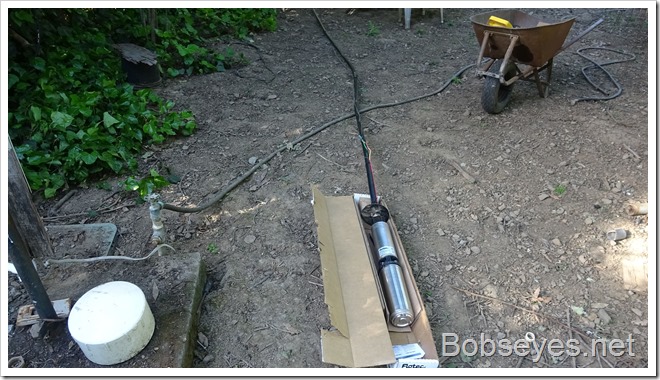 Takes a lot of tools

I really underestimated just how many tools I’d need to do the job at the beginning and at the end of the day there were about twice as many tools in the wheelbarrow as when I started. It seems there’s a lot of things that need done to hook up a well pump. 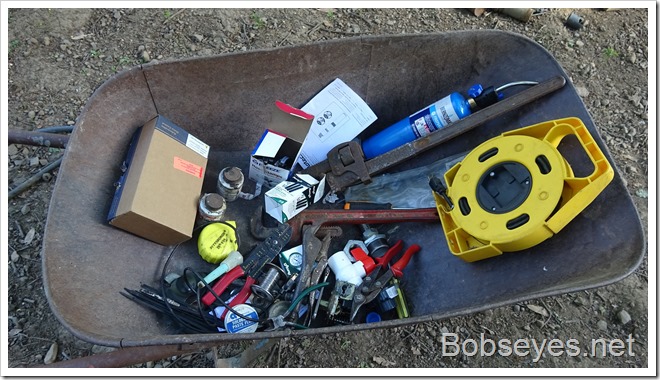 While I was in the yard I heard someone whistling on the road and saying something thinking something was going on out on the road.
As I approached it turned out they wanted to talk with me.

The guy says, you want some sheep? I say no. He says you have eggs for sale and I say no, not knowing where the guy was coming from. He starts to leave and I noticed he’s a tree trimmer with a chip truck and thought maybe his sheep was chips as he was from Mexico.

So I say you mean chips and he says yes. Sure I can use some chips. I can see he has a hard time saying chips so ask if he can say woodchips and he can’t say wood either. Something about how they pronounce their words in Spanish compared to how the English pronounce things.

You want some eggs

So then I ask if he wants some eggs as I have lots right now. I give him sixty eggs as there is three guys and tell him I don’t sell eggs. He says he likes his eggs in his orange juice, I think raw.

Anyway we got some more woodchips and they are going to bring more of them in a couple days.

Apparently he’d talked with my brother about the woodchips but no one told me.

After that I checked on the chicken’s stuff in the pen and found they were out of egg shells so I got my bucket of egg shells from the house and a feed sack and put the shells in the sack. 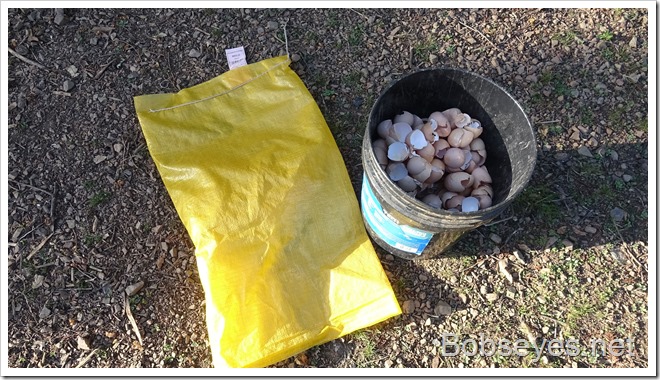 Once in the sack I can jump up and down on them to smash them up a bit. I’ll put the smashed shells in a feeder in the pen so they can consume them. Egg shells make eggs or help to. 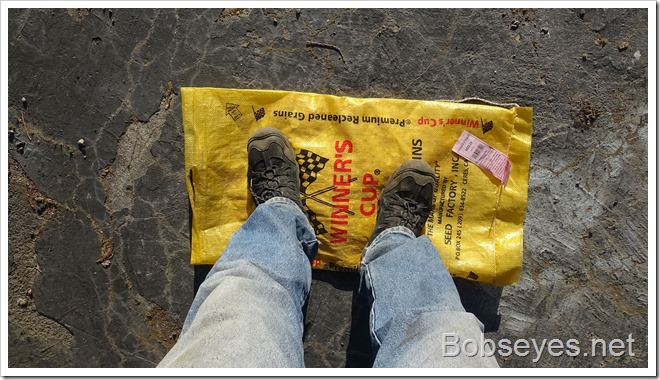 After that I did some more planning on the well hookup stuff I will need to shop for and did some chair hopping and enjoying the day.

2 Responses to Well Hookup, Sheep for Chips and Egg Shells For Eggs