We Got Peeps and Getting Them Eating and Drinking

When I got up this morning I went out front to see if there was any sign of the peeps coming early this morning and I saw this shipping box so I knew we had chicks in the coop. 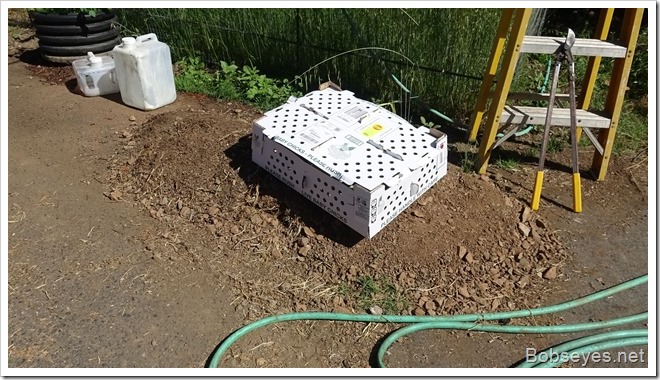 I had to finish waking up so after some coffee I went out to see what we had.

This is what I found in the coop. A box full of 31 chicks. And no I couldn’t count them in this box. They were hard to count when they were out, but I finally realized if I counted the dark ones first I was then able to count the other ones. 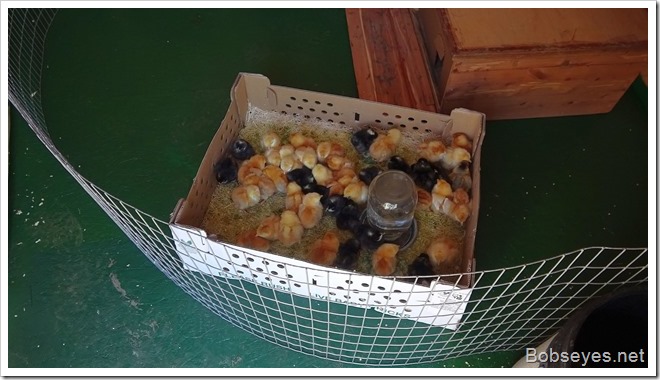 I spent some time dipping my finger in water and toughing their beaks with it. The idea is to get them drinking and eating as they’ve never done that before. They’ve been living off their yokes from the eggs.

I checked the rat trap but it wasn’t set off. I think the rats around here might be well trained to traps so I’ll have to go to plan B more than likely.

Marty shows up with his van

Marty showed up to try and figure out his vans intermittent problem. I had another distributor that I thought we needed to install just to make sure it wasn’t anything to do with that as we haven’t been able to solve this problem yet.

We pulled his van under the carport where there was shade and he started to set things up to pull the distributor. 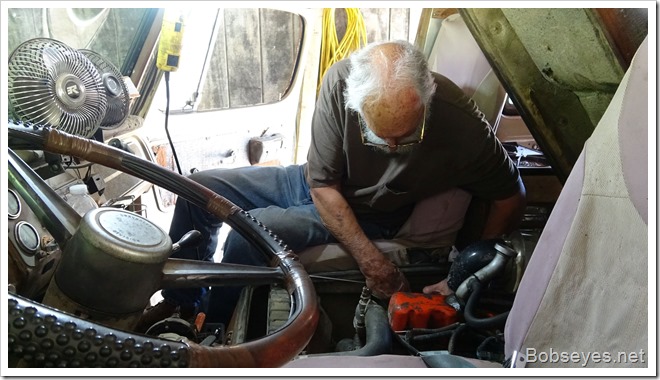 The first break we walked around the yard and ate blueberries and raspberry’s and plums which is what’s ripe right now.

Before he got the distributor out, it was break time again. While discussing things he decided he’d rather take the van back to his house and do the job as there was some wires that were different between the two distributors.

About that time my brother Tom came by and said to get the peeps out of the box so I got them out of the box and some went right through my wire and were headed for the open door so we used some of the shipping box cardboard to fence the fence off. I was expecting that as Tom warned me he had problems with them going through chicken wire which was one inch. A couple did get out during the day but couldn’t go anywhere as the door was shut. 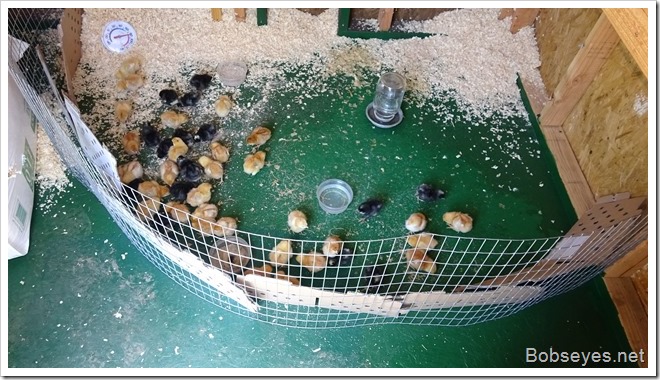 Once the chicks where out of the box they became very active and started drinking more water and pecking the food I dropped on the floor. They were eating out of the bowls, but I found when I dropped food on the floor they’d all go after it so it seemed they liked that the best. Anyway they seem to be drinking and eating and all look well so far. 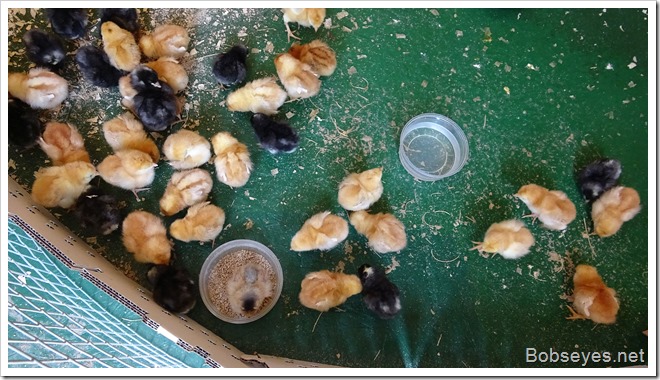 Marty went back to work on his van putting things back together so he could drive it home.

I cut some rebar

I cut some rebar for some roof panels for the enclosures. 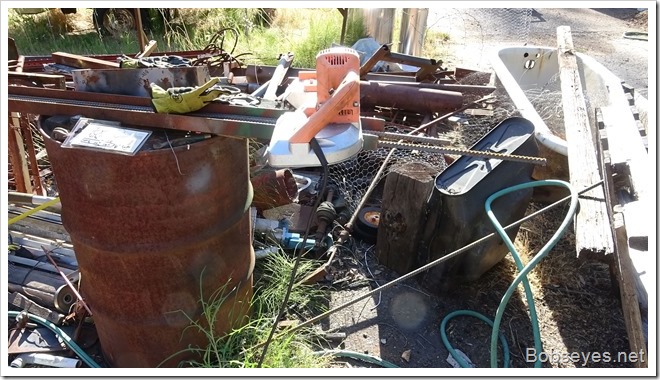 I have two non square panels to make so I started the first one and then took it over to where it goes to see if it would fix. 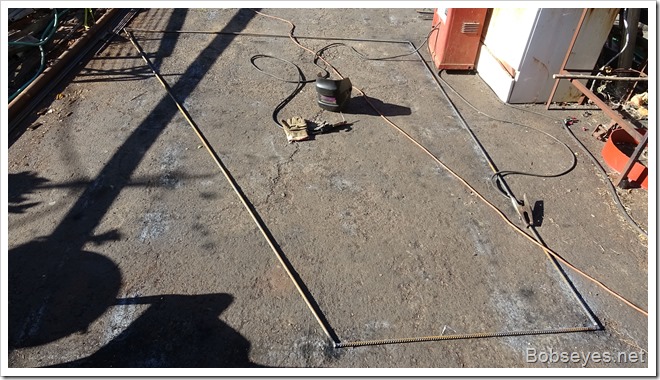 That panel is the ceiling panel for this alley way which will be the chicken mulched eating area. 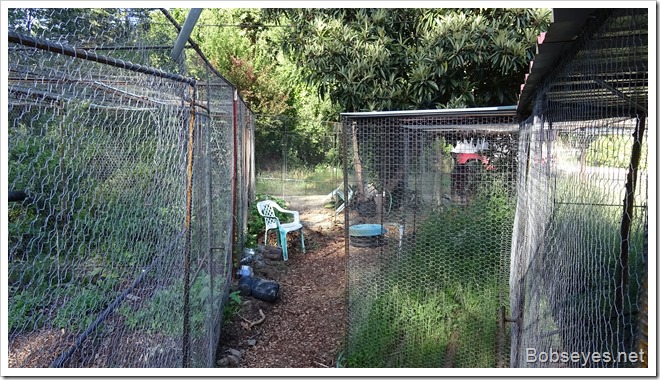 It did fit so I brought it back and finished welding it up adding some braces.

Heat for the peeps

When I went to check on the peeps I noticed some of them were standing in the suns rays so I put a light bulb in to generate some heat. It’s not really too cold at night here. They seemed to like the heat from the light bulb. 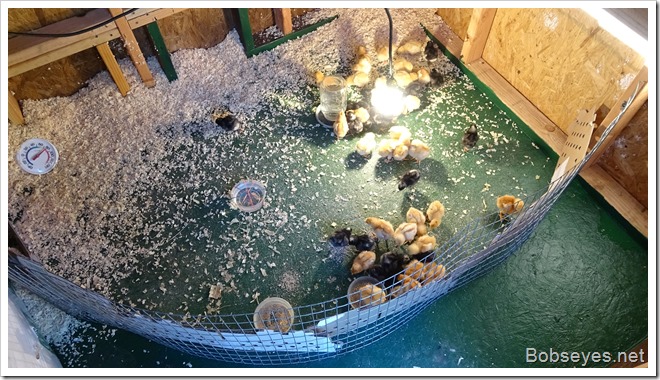 Only one panel today

Here’s the panel I finished welding up and needs some wire attached to it now. I’ll weld up more panels before I wire it up. 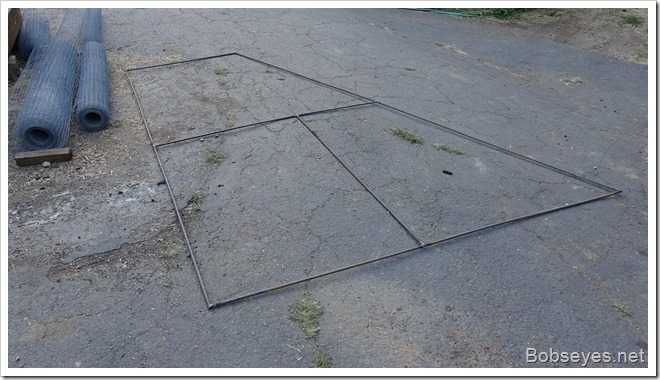