Seemed like a good day to go for a paddle down at Jenner so off I went about noon.

A fire truck’s lights showed up in back of me as I entered the town of Jenner so I let it by. Little did I know I’d see a lot more trucks and be in the mist of a forest fire at home before the day was out.

I put my boat in the water and headed up stream when another fire truck went by across the river on the road there. 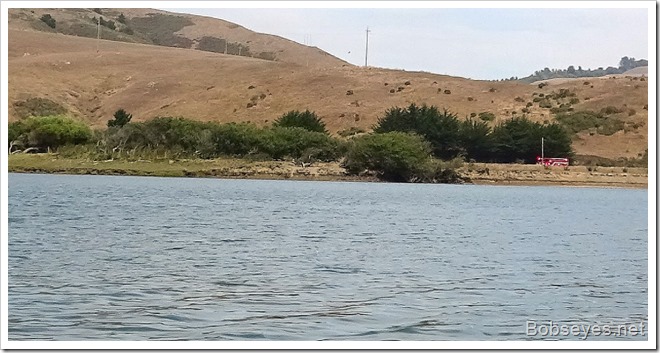 And soon another one. I think there were about 15 or so of them during the  next hour. 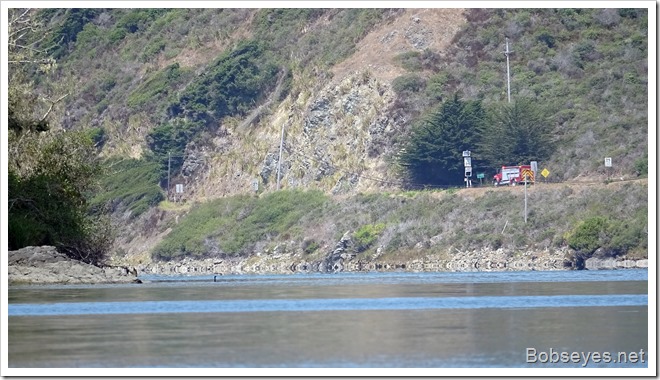 I paddled on up the river to my usual spots stopping along the way and enjoying the day as it was a nice one.

Eventually I started back down the river after crossing over to the other side as I wanted to check for birds on the shoreline along the way.

There were a few bunches of them. These are merganser ducks and cormorants just resting on the beach. 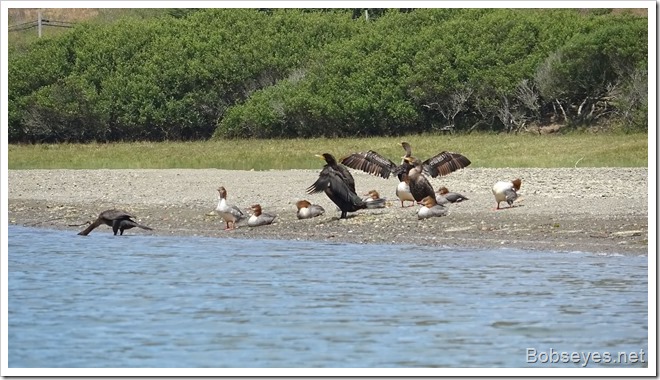 I can see this fire’s smoke

As I paddled down the river after deciding to go to the river’s mouth area. I thought I could see smoke up ahead on the hill just about center. Yup it had some blue in it. Glad it’s over here and not by my house. 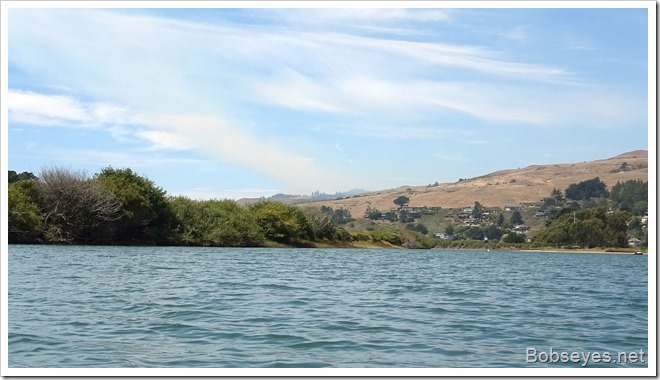 I was headed down to the open mouth area behind this egret I went by. 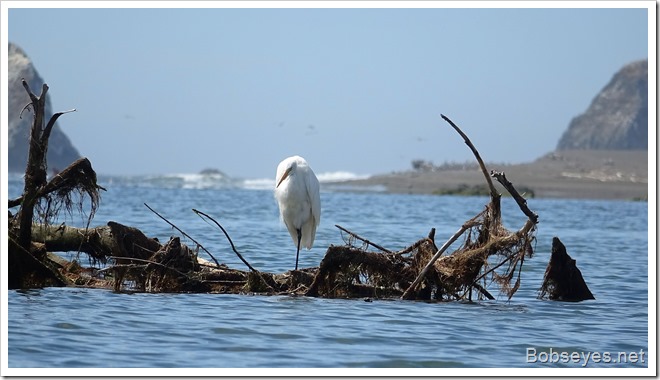 I noticed quite a number of pelicans on he end of Penny Island. Here’s just a few of them, more later. 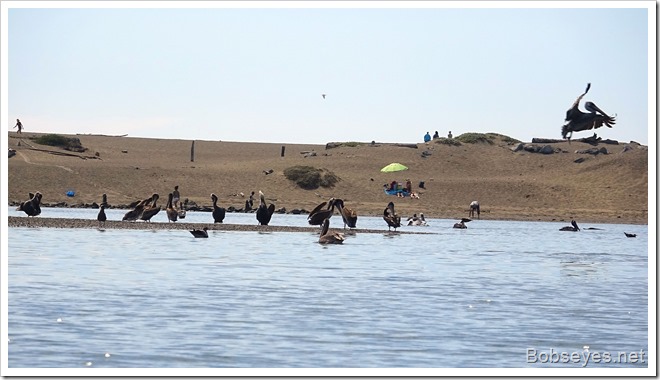 There weren’t many harbor seals by the mouth today for some reason. 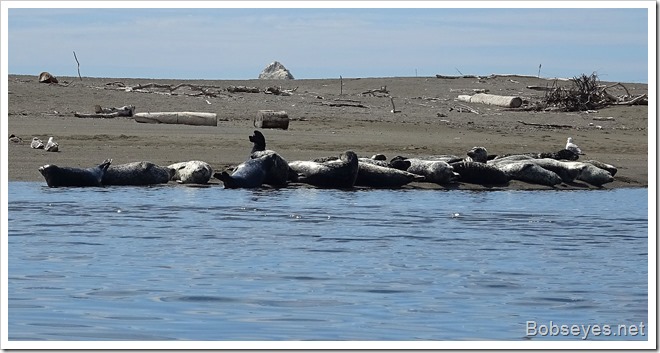 And here, where there were hundreds of birds the other day, there are just a few. 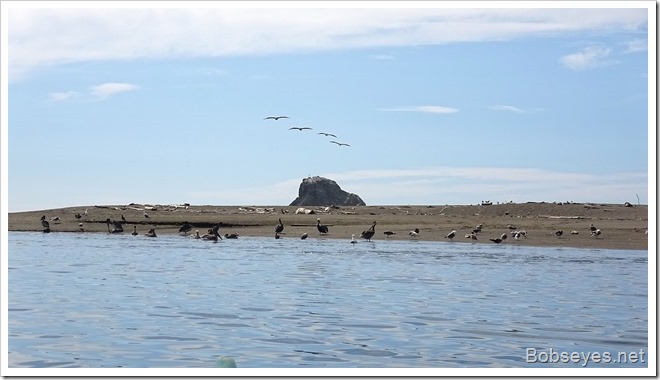 I hung here at the mouth for a bit watching things and making sure I didn’t get pulled out to sea as it was low tide and the river water was draining into the big ol ocean. 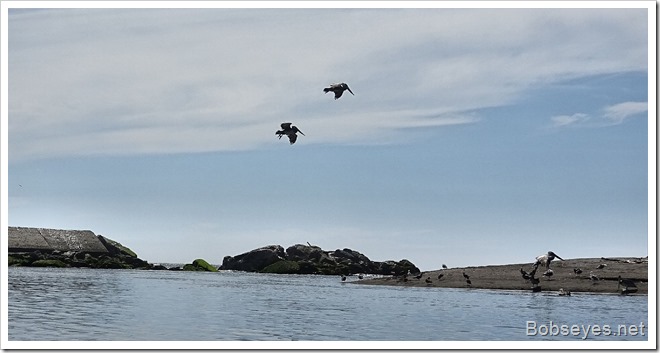 As I headed back to Penny Island I spotted this big billed duck of some kind. I’ve noticed it hangs around here a lot lately. 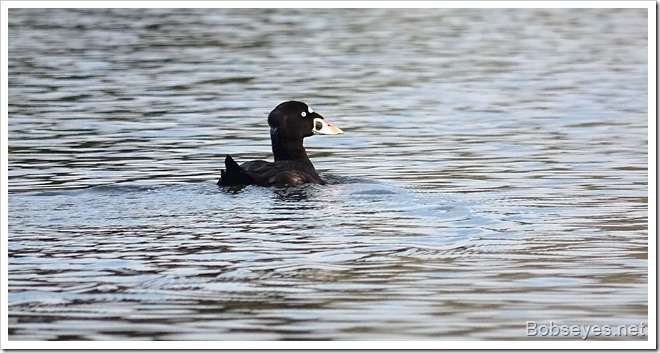 Lots of brown pelicans up ahead

I’m headed back to Penny Island where I can see a few hundred brown pelicans resting on the shore and some in the water too. 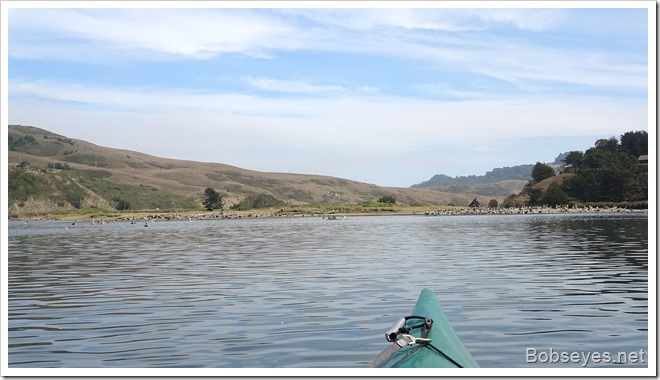 Here’s some of the brown pelicans on the island to give you an idea of how many. 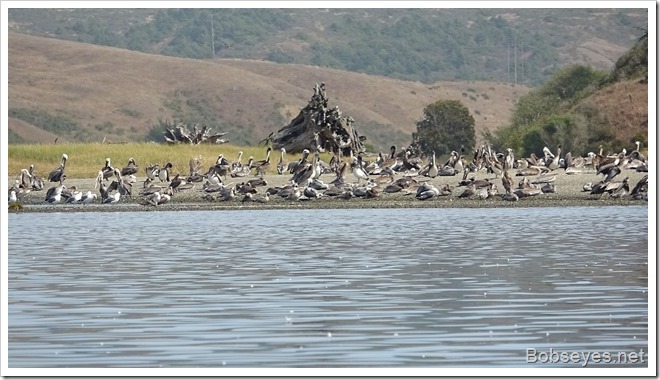 I made it back to the boat ramp and put my boat on the car and headed home.

Oh, oh, this is not good

As I turned onto the road to my house from the town of Guerneville, this greeted me so I pulled over for a picture. No one said anything about this fire which I later learned started yesterday. My house is up ahead on the right about a mile, so the fire is still fairly far away. 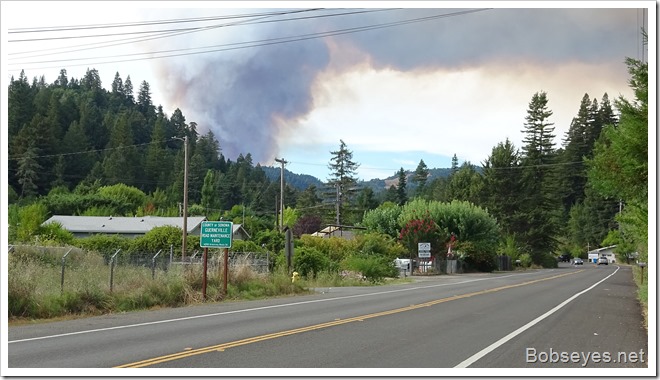 Dirt bike ride to check out the fire

Once I got home I jumped on the dirt bike to ride up into the hills to have a look to see what I could see.

I checked the water level at the tanks about half full and rode on up the hill on that road. 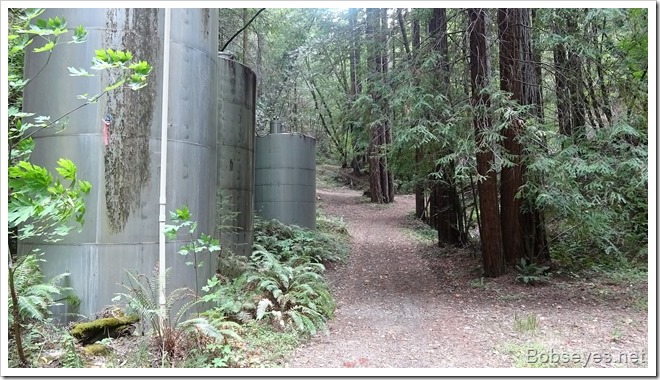 Hard to find a look out spot 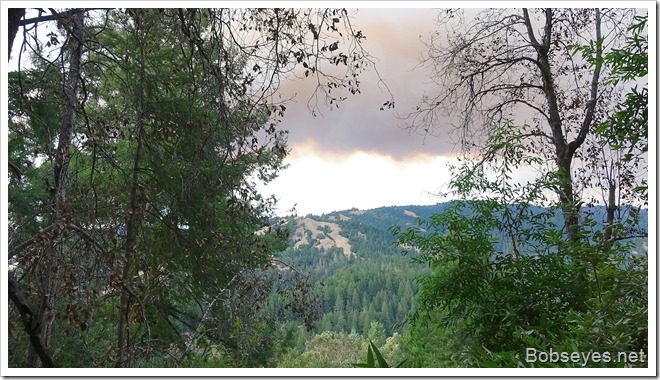 On the way home I went by the bull dozer parked in the trees and thought that’s no place for a dozer if the forest fire comes through here.

So I found my brother Tom and got a ride up the hill with him so I could drive it down the hill to his garden where there weren’t so many trees.

Here’s where the dozer was parked and Tom letting me off in his truck. 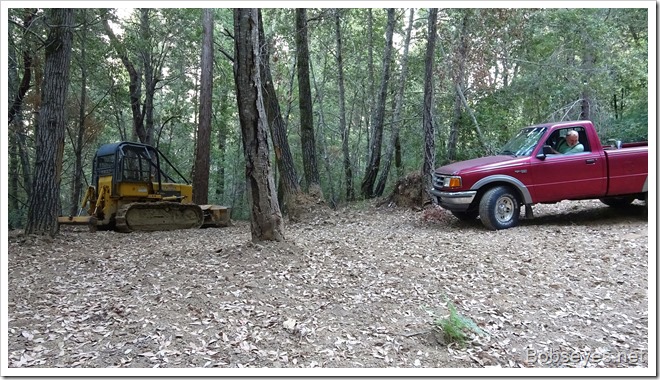 Well what the hey. Any kid loves to operate a bull dozer so off I went headed down the hill on this road. 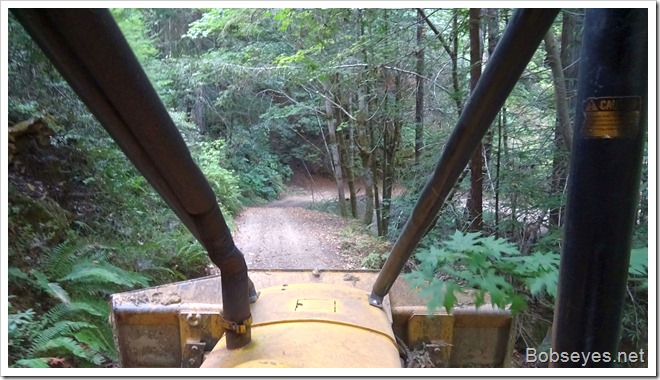 And through here on this road almost down. 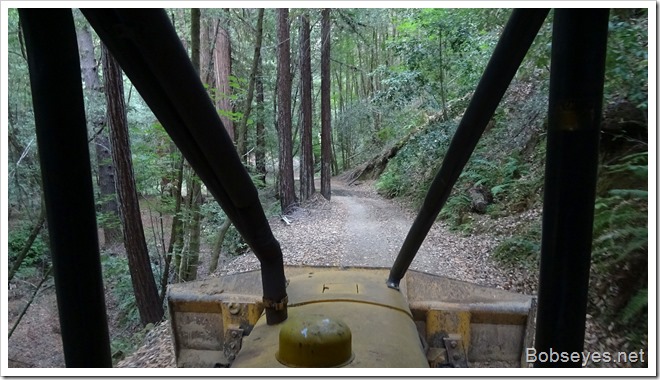 I made it to the garden area and drove on into the garden in the back there and parked it where there are no  trees. It’s hard to find a spot with no trees when you live in a forest. 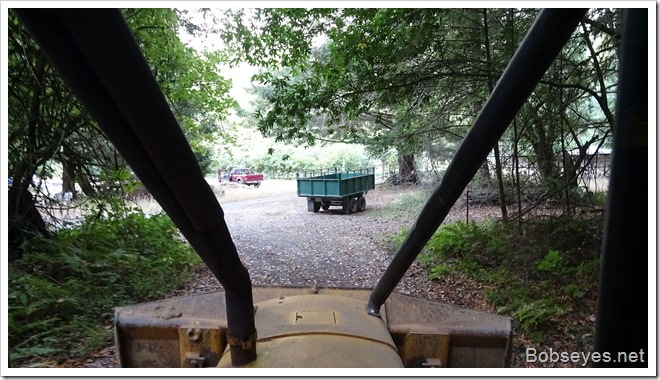 We continued to tidy things up as much as possible in case the fire came through here.

At around 7:30Pm the county declared a mandatory evacuation order for our area as well as a bunch of other places. Hummmm what to do. If I go I need enough food and water to provide me with no corn type stuff, so I started to prep my van just in case so I’ll be ready to go if things get a lot worse.

Someone also has to stay as long as possible to take care of the chickens and animals as they  need feed and water, but not to worry as I’ll leave if need be.

Noisy sirens, lots of them

Around 8PM sirens started going up and down the roads. They sure have quite a few new types I haven’t heard before. It took awhile to settle down once they went further out the roads.

Quiet before the storm

Right now things are real quiet,  even though a few hills over, the forest fire is raging.

I think it will go around us but one doesn’t know for sure. Fires don’t normally burn down into this river valley, at least not historically.

So more drama then one needs right now but I think things will be ok.

I’ll consider all my options tomorrow if all goes well through the night. And I’ll be fine in my van if all else goes bad.

The ridge to the north of us just lit up which put a scare into most. It’s about two miles away. We can hear a lot of big pops as the trees blow up from getting so hot.

So far all is well but we likely won’t get much sleep tonight. If it moves this way we have a good route out away from the fire.

So I’m off to bed to see about some sleep. Maybe.