Wasn’t Planning to, But Spent the Day Shooting the Bull

Indoor plans for a drizzly day

It was supposed to drizzle today, so I made arrangements to go visit my friend Charlie in Monte Rio to take a look at his electrical problem. He always has weird electrical problems because he likes to install it himself, but doesn’t understand the basics very well, so I bale him out when I can.

Show me the problem

I had him take off the electrical panel so I could measure the line voltages as he showed me the problem. He had some LED lights that would dim when he turned on his, on demand, hot water heater.

I measured the voltages and could see they were dropping a little, but not enough to make them unsafe, so concluded his house wasn’t going to burn down. The LED’s were dimming a little just like if you’d had a dimmer switch on them so not really a problem.

We shot the bull for a couple hours after that.

Sherlock wouldn’t of missed this

Here’s the electrical panel and a bonus of me taking the picture. The picture reveals something you’d have to be a Sherlock Homes to detect?

The mirror image shows the camera up on my left eye, even though it looks like it’s the right side, the mirror reverses that. I’m right handed and most right handed people’s right eye is their prominate one, like the eye you use to aim a gun. But a few of us are different and use the left eye which makes aiming a right handed riffle a bit more difficult.

Sherlock would have noticed this. I bet you didn’t. :O) 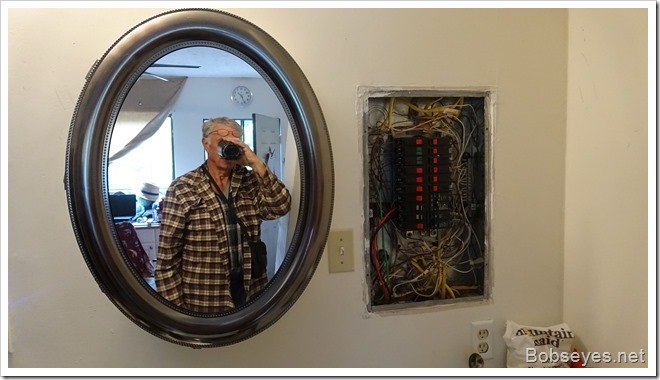 I didn’t discover this eye thing until I was at a Boy Scout camp at the riffle range when the range guy says, hey, you’re one of those guys to which I said, what? I hung around the riffle range and eventually the guy asked to me to walk the half mile back to the main camp and get a left handed tent wrench for him.  The guys at the main camp had a good laugh and sent me back to tell they guy at the range they didn’t have one, but had a right handed one, so off I went being a good kid trying to please. True story.

Shooting the bull with Joan and her pets

So after shooting the bull with Charlie, I  went next door to his neighbor Joan’s house to visit for a spell. She’s an interesting lady who was brought up in Japan and has been around. Before I knew it it was four PM already. 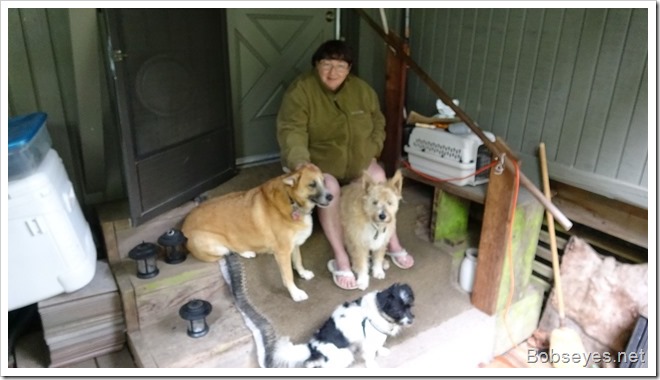 Just a little drizzle and the beach is closed

I started for home, but stopped at the Monte Rio beach for a minute as I had some questions for the guys that run the beach about kayak rentals, but the gate to the beach was closed so I again headed for home.

While I was driving through the town of Guerneville I noticed the Farmer’s Market was open so I pulled in as my brother Tom sells at it and I’ve never checked it out so this was the time.

They are just getting started for the year so it’s fairly small so far.

Here’s the what it looked like as I approached. My brother’s is the tent on the far right. 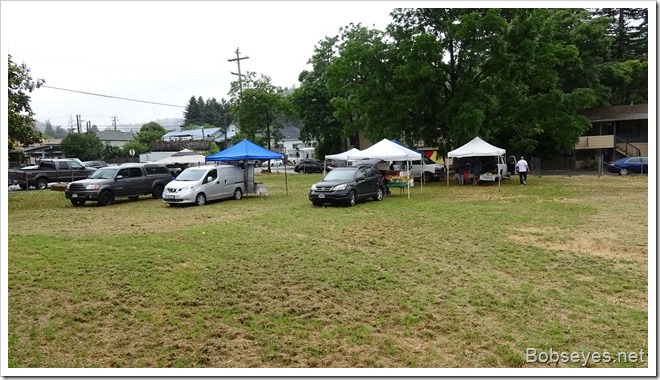 As I approached I could see he was real busy selling stuff so I veered over to the left and talked with a guy selling pork sausage. Tom yells over to him that I’m his brother so we shoot the bull for a half hour or so.

That’s Tom busy selling produce to people on the right. 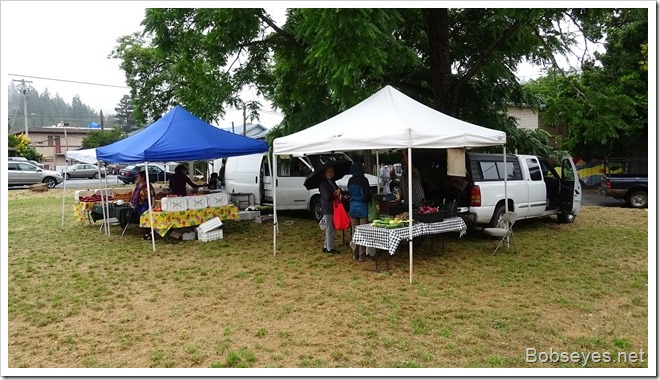 Tom at the market

After chatting with the pork sausage guy I found Tom taking it easy waiting for the next customer. I shot the bull with him for a bit, then headed for home again. 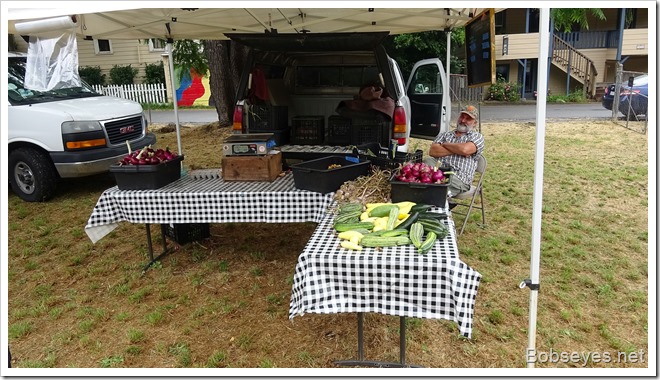 And finally John and I shoot the bull

But as I went by the fire department I thought John S. might be home, so I detoured to his house and found him there. He said he just took his wife to the airport. I was surprised to find we had shot the bull for two hours. John’s fisherman, so he gave me a couple dinners worth of ocean rock fish as I left. Yummm.

Well, I didn’t intend it, but the day really turned out to be a nice day of shooting the bull. :O)

1 Response to Wasn’t Planning to, But Spent the Day Shooting the Bull