I wasn’t into working today so I got up late, 11:30. Once I got it going I drove down to the county yard to see if John was there having lunch. I missed him but his boss John was there so I shot the bull with him for a bit. These are the guys that put the county dams in the Russian River every year so they are prepping now to put them in so they’ll have them in by June 16.

I left John working away and drove down to visit Cheryl the first John’s wife to talk chickens as she has a few and knows all the local stuff on stuff.

I found her home working in her garden so we shot the bull for a bit about chickens.

One thing I wanted to know is where she suggested to get chicken feed stuff as I knew her to be thrifty. She suggested the local feed store and said the ladies down there were very helpful so that sounded like I should check it out.

I drove to the local bank and got some cash as I’m not really into using cards that much as I’m a bit old fashioned sometimes.

Next to the gas station to get some premium gas for my brother Mike’s motorcycle I ride once in awhile.

After that I drove to the local hardware store as I read on the net that they carry the brand of corn less chicken feed I wanted to look into. They didn’t have what I wanted, only the stuff with the corn in it and they recommended a place in the near by shopping area instead of recommending their neighbor the pet food store where I’m headed next. It’s called Barkers pet supply.

I talked with the lady at the pet store, her name was Karen. What I want will need to be ordered as I mostly want bags of seed so I can mix my own. I gave her a list of what I could remember that I needed and she would find out what the pricing was and send me an email and I’d make my order. I’m getting one bag of the no corn chick starter just to start them off and then I will switch them to my mix and they will get a lot of yard stuff too. I can always grind up some of my oats to start them off if I don’t get the starter on time.

Anyway that went well and it’s mostly taken care of for now. And I don’t’ have to drive an hour down to the big feed store in Petaluma which is nice.

Too warm for working

Once back home I still didn’t feel like doing any work and the day was pretty warm too, so I took it easy in the shade and tried to do some planning for things like my water system that needs some more pipes for faucets.

I did get some work done

Later in the day once the sun was lower in the sky as not to be hot, I started cutting and pulling the brush away from the chain link fence as I want to put a water pipe along the fence bottom to supply water to my chicken and garden area. I can hook into our spring at the old well and also I plan to put the well back in operation so as to make sure I have all the water I need for my operation as springs slow up in the late summer and there are five housed on the system. I wanted to put the old well back in operation anyway as it’s actually the properties main water supply on the property. Our springs are on the family property which might not be too good for the next owner after I’m dead and gone.

It’s a good well with plenty of water except for a slight sulfur smell which will be ok on the garden.

I started pulling the brush out here where I cut the tree down yesterday. I’m headed to the left where I have the old well. 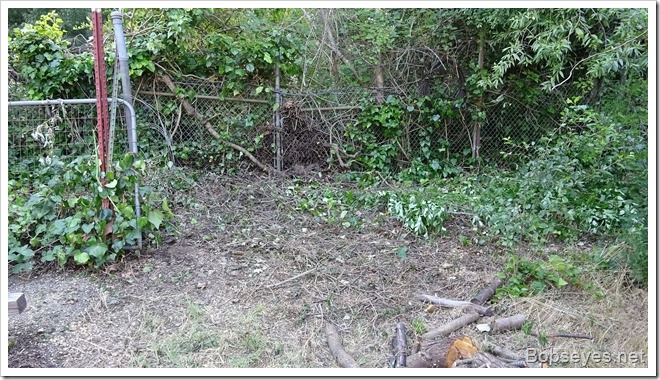 Not a brush pile

Of course I generated a lot more brush. Here’s a little of it in a new brush pile I made. I usually don’t call them brush piles as I now call them critter habitats.

That’s because a number of years ago they made us get a permit to burn stuff which meant a city type guy would come out to inspect what you wanted to burn. Country people dealing with city type thoughts is not liked and all the inspectors are from the city and I don’t like government types on the property anyway.

So the solution was to not burn anymore. But then they don’t like brush piles either claiming they are a fire hazard. So what,………. the whole forest is a fire hazard. Anyway I decided to make critter habitats out of them instead by changing their name and I don’t burn which is what the government people want so every thing works so far. They also make good compost which can be found under the pile. The piles tend to collapse in the winter so more can be easily added. 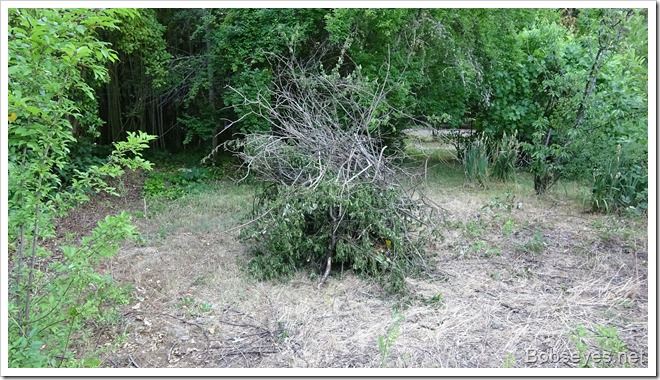 I’ll slowly move my other pile I was cutting up yesterday to this one as time permits.

Back to the fence I continued down along here. I still have more to remove here. The pipe will lay along the bottom in the brush so will be protected from the sun and out of the way. I’d bury it, but it just doesn’t seem necessary in this spot. 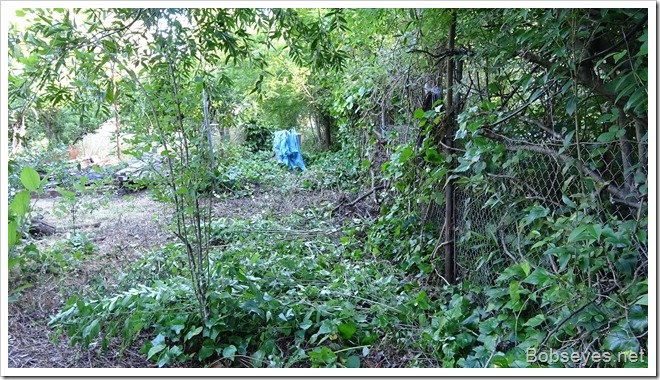 I’m going through here too. I unfortunately cut a nice table grape vine in the process. Hope it will grow back. 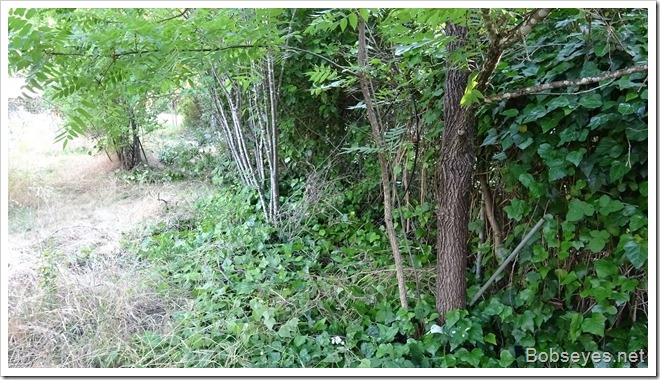 I’m almost to the old well which you can see down there. 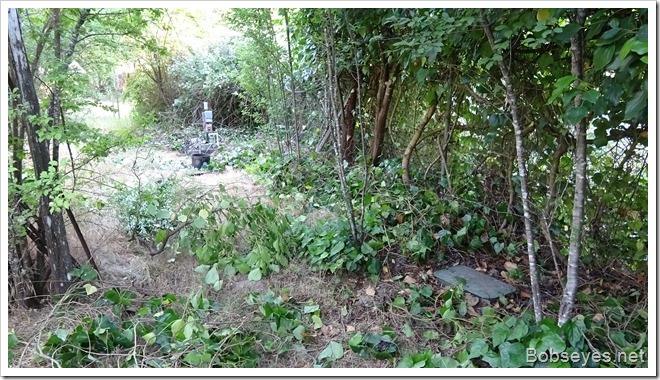 I cleaned the brush around the old well. Some of those blackberry vines got me and boy to they hurt when they pierce the skin. Ouch.

The well is 54 feet deep and may have some sand in the bottom. I will need to measure it and get the sand out if it needs it. I have a plan for that. There’s no pump in it at the present time. I will hook into our spring water here too as the faucet there is spring water. 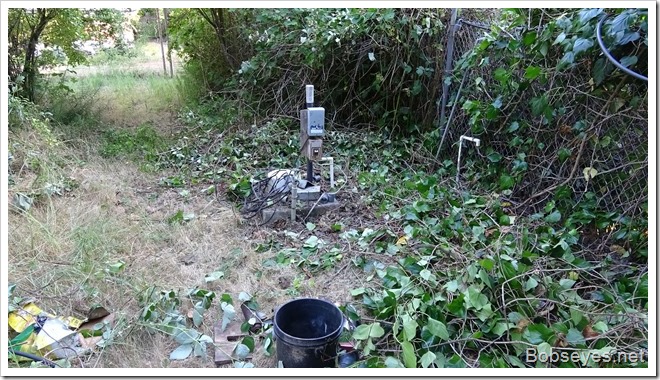 This morning my brother Tom who runs Armstrong Valley Farm and sells at the farmers markets was going by and asked if I needed any cucumber plants. Sure. He gave me two so I needed to get them in the ground now that the sun was down so I prepped this spot and planted one here and one in some mulch close by. He says they are small ones, Gherkins. 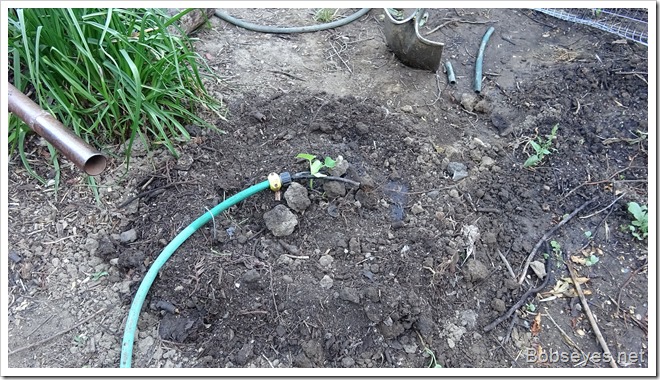 The chicken or the egg

Mr. Ed in comments says he now knows which comes first the chicken or the egg. From my blog it’s easy to see the chickens come first. :O)

A bit of chair hopping before dark and that was my day.