I felt the throttle was a bit loose yesterday when I did the test drive so I decided to have a look at it and see if I could adjust it better than it was.

So I opened the hood and was going to work on the throttle cable where the spring is but what I saw was a coolant leak that needed some attention. Puddles on the manifold. 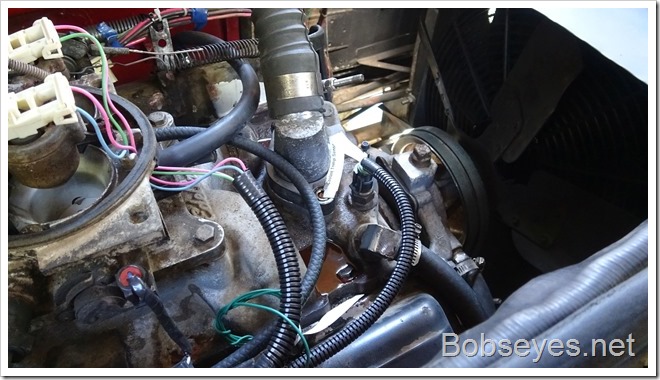 I thought I had this fixed earlier but I guess not. The fluid seemed to be coming from the part the black hose is attached too. I found an Allen wrench and was able to tighten one of them up just a bit. 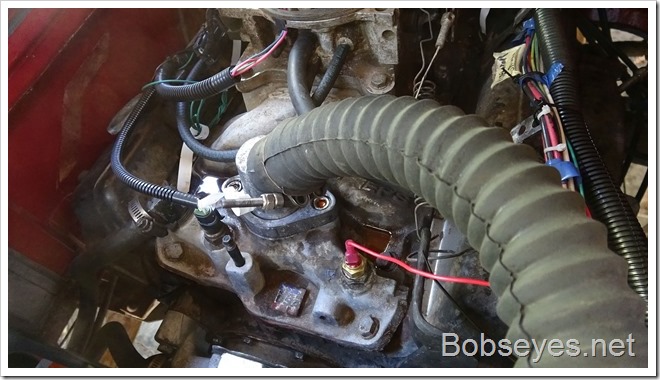 The next thing I looked at was the throttle cable adjustment which is just over that brown spring. It has slipped and needed to be readjusted and fine tuned and put back together properly which I did. The return spring was a bit weak too so it wasn’t returning to idle properly so I made some adjustments on that too. 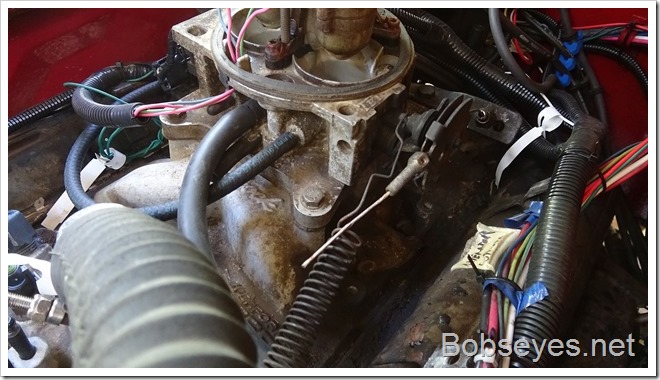 I started the van up and let it warm up to give this fix a test but it would only warm up to 170 degrees so I took it for a short test drive down to Guerneville where the temp only got up to 190.

It didn’t leak so  maybe I fixed it but I will check it on the trip to be sure. The throttle worked real good, much better than yesterday which actually gave the van much more zip.

A commenter suggested I get rid of the tire in the front of the van and it would run even cooler. I’ve had many people suggest that……….but.

Over the years trying to solve the overheating problem I’ve tried  many things that just didn’t work. I found having the tire  mounted there made no difference as most of the air to the radiator actually comes up through the belly pan underneath. Marty has a van like mine and decided to mount his tire in the same place after I assured him it made no difference and it didn’t.

Another thing I tried that made no difference that I could tell, was installing a shroud around the fan blades. It made no difference and only made it harder to work on the engine so I dispensed with that also and now just have a little safety shield on the top.

Now these things might have made a small difference if I didn’t have the over heating problem…………….but.

Right now it seems to be running plenty cool enough. The big test will be on this up coming trip as hot desert traveling on freeways with long up hills is where I used to have the most over heating problems.

I celebrated by getting a peach off the tree and eating it. Yummy

My brother Tom said one of his wells stopped working the other day when he was watering and wanted some help finding out why.

First he had to clear some of the stuff out of the way so we could get to the well. Especially the blackberry vines. 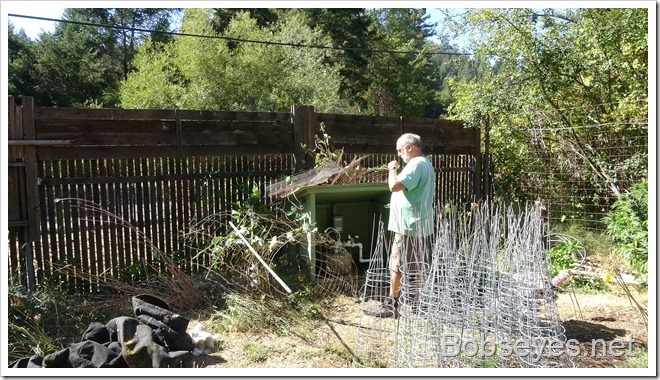 When I turned the well on it pumped water for a bit then stopped. I checked a couple times and that seemed to be the case so I was pretty certain it was going dry. But it was also acting a bit weird.

We were ready to pull the pump up when I decided to try one more test as the pump starter box may be defective. That’s the little gray box there. 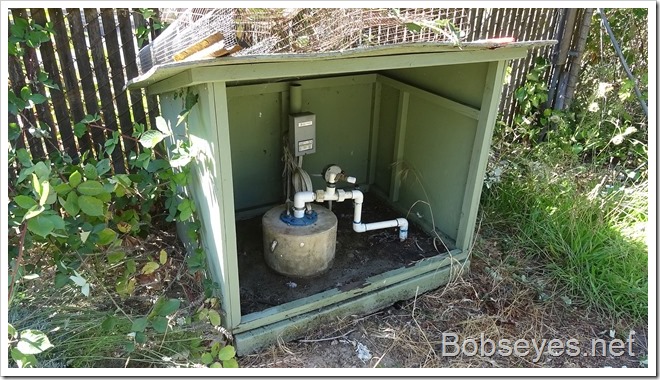 I had a new starter box on  my well that I wasn’t using so I checked and my box would fit so I installed it and we did the test again.

Lo and behold it kept pumping water so the well wasn’t dry but the pump starter was bad. We cycled the pump for several cycles and it ran nicely.

That last test with the starter box sure saved us lots more work and likely a bunch of money too as if we had pulled the pump we would have found enough water in the well and would have likely replaced the pump that comes with a new starter box.

Good to have that fixed and the well is not dry.

Checking the van’s supplies for a trip

I spent some time sorting out the stuff in the van looking through all the stuff to see what I needed as far as supplies for the up coming trip.

I don’t need much just add the food stuff and most of it is ready to go.

Just before dark I wanted to go up and check the water level in our water tanks from the springs.

I couldn’t find my camera or the case I used to carry it in so I hunted round everywhere for them. I found the camera in my electric bag but not the carrying pouch so I took  off on the dirt bike without it.

The tanks were three quarters full which was good. I rode on up into the hills where I saw a very nice red sunset and then rode the bike around a loop and back to my house just as it was getting dark.

Time to close the chickens up for the night and into the house I went.

I hunted one last time for my camera case and eventually found it under some clothes on a chair, right where I left it.