Van prep and some booboos

I fed the chickens and got something to eat and then I needed a bit of a nap.

Once that was done I checked the van’s transmission and transfer case oils and found the transmission oil to be low. I added what it needed.

Then I added most of the clothes I’d need for the trip and a few other things too.

Headed to the Hermit’s place

I was going to go up to the Hermit’s place tomorrow to check on the pipe trail making guys to see how they were doing but it looked like I had time to to that today which would free up more time tomorrow so off I went.

The Hermit was in a good mood but said we have a problem with my pipe design and thought it wouldn’t be able to fill an old redwood tank he had up on the hill.

I explained that he wasn’t a water guy but more of an artist and my design would work just fine, much better than his old design that barely worked, but I didn’t mention that.

He accepted that so after some chatting I worked my way up the hill to where the guys were working on the water pipe trail.

They were mostly doing a good job but I did point out a couple of small improvement’s where they were going up and down with the trail just a little which needed improved just a little.

We checked out the rest of the trail that still needs built and they were wondering if they had to stay exactly on the trail I laid out with pink ribbons. I said no, do what you want as long as you don’t go up and down it will work. There’s some big rocks they would like to avoid if possible as it’s hard to make a trail in the rocks.

The guys checking out the pipe trail with me. 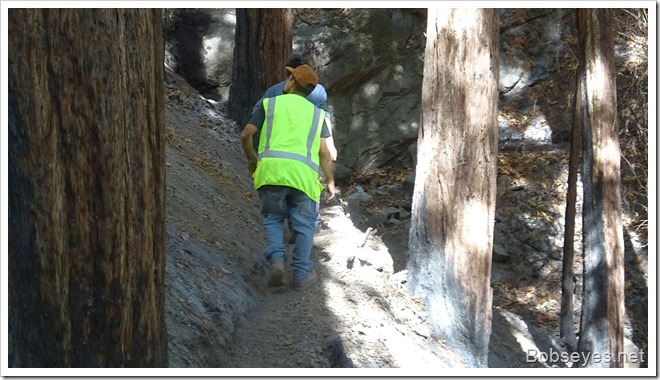 I figure they know pretty much what to do and can finish this project while I’m gone and get it hooked up and water to the Hermit’s house so I left them at it.

I headed back to the Hermit’s house and saw these rigs parked in his yard. 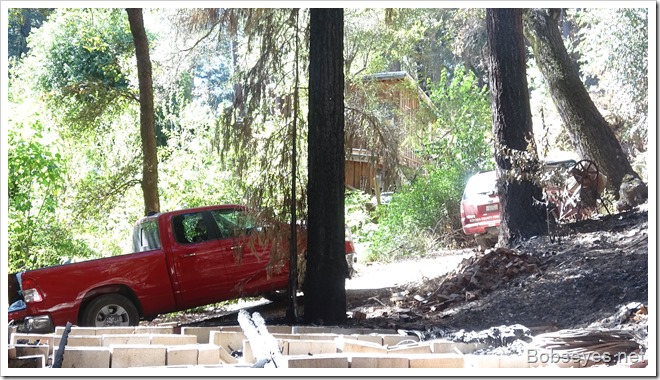 They turned out to be Hazmat guys looking for hazardous materials that had burned and would eventually pick up any stuff they found.

They did find some old windows that had asbestos sealer in them that they marked for pick up later. the windows were no longer any good anyway as they’d been laying on the ground for a number of years and were not needed for anything. 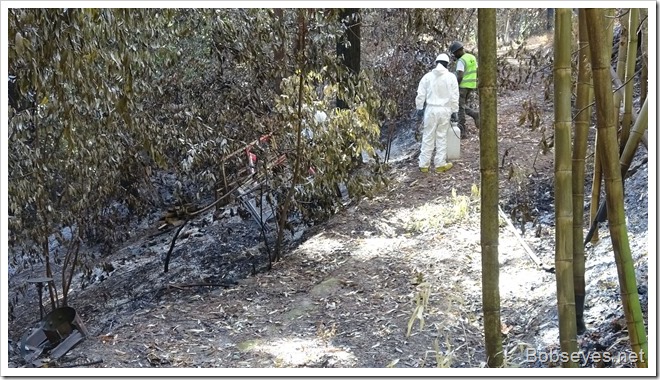 After chatting with the Hermit for a bit more I headed on home.

Gassing the van and a booboo

I needed to fill up my van with gas for the trip so I drove down to town.

The station was fairly full and I had a hard time maneuvering into a pump spot as the cars that were already in there where mostly blocking things a bit making it a bit tight to get into a pump.

In the process I ran my van into a big yellow metal post set to keep one from running into the gas pump.

It looked like this once I got home. Good thing it’s and old van and didn’t do much damage like it would on a newer rig. 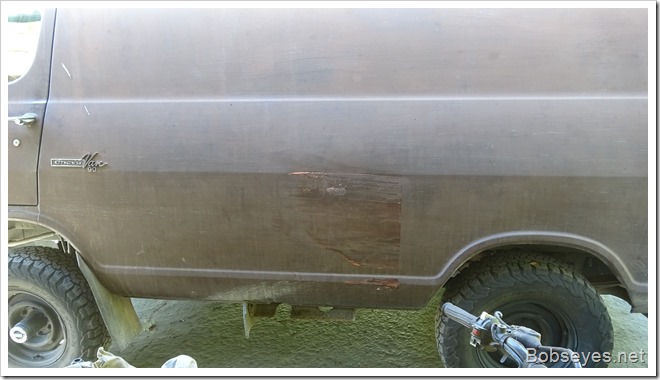 I washed it off and applied a couple coats brown spray paint.

The sun sorta washed out the picture but it does look like I need another coat of paint. 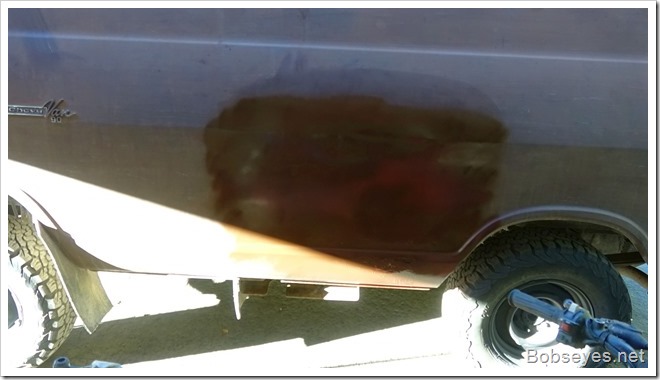 Now you know why

Now if I’d had  nice paint job it would have been a mess. Now you know why I don’t put a nice paint job on the old van as it’s easier to just add some more paint when this old paint gets scratches on it such as from going through brush or trying to run over big metal posts.

One other thing I needed to do before leaving on this trip is deal with the dried fruit I’d been drying.

A lot of the fruit was well dried but there was some that was still a bit too wet to put away. I packed up what was dry enough and then decided to just cover up the rest with a tarp as I wouldn’t be here to uncover it each day. It gets damp at night if uncovered. I figure it’d do what ever while I’m gone and at worst I’ll have to throw the last of it out if it goes bad. 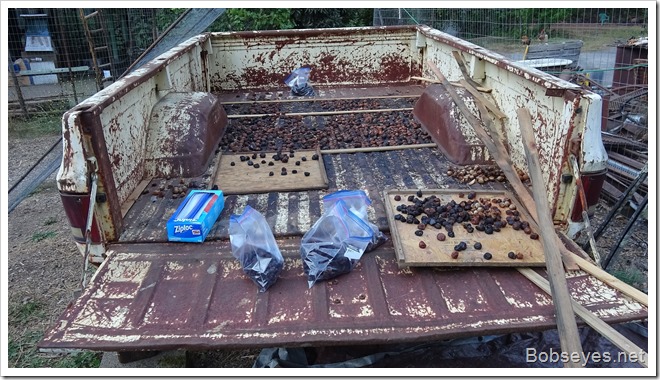 One other mishap during the pipe crash was the dent had pushed in the side temporarily to cause one of my compartment doors to open and crack in two so I had to unscrew it and put some epoxy on it.

Cracked and ready for some epoxy. 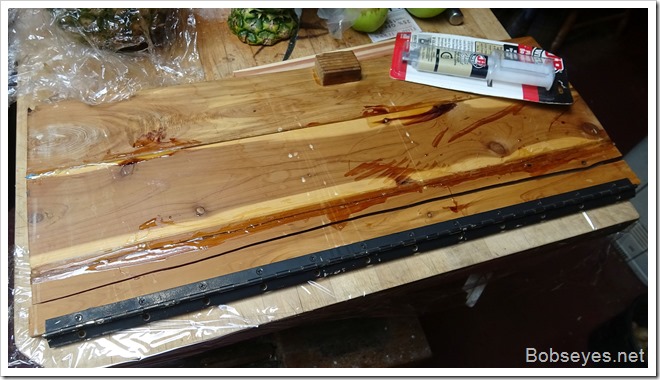 Despite the setbacks it all got fixed and  I’m almost ready to roll with the van on Sunday.

Nice day puttering around making booboos and fixing them up.