Final day prepping for my trip

I had a few things to do to prep the van today. I needed to clean up my boat a bit  so I got the soap and water out and gave it a bath. The front pick up rope used to pick the kayak up was getting a bit worn, so I found a piece of hose and replaced this old thing. 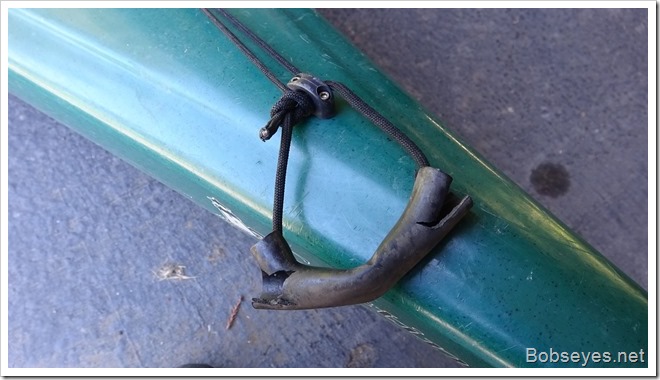 My brother Tom mentioned my spare tire looked lumpy the other day, but I didn’t think it was that bad until I looked closely at it today and saw that the tire had split into the steel belts and was totally bad.

You can see the holes torn into the tire as the tire has cracked open. 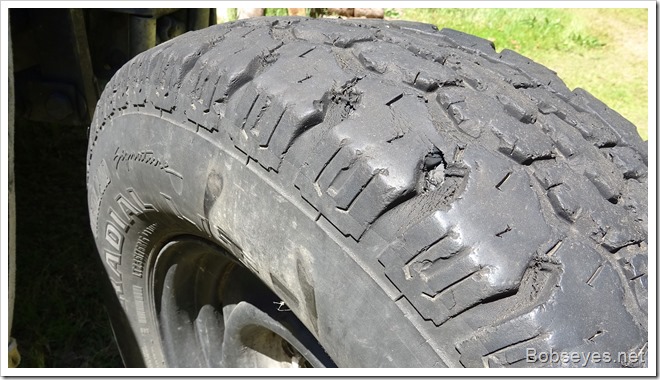 And an unexpected fix

Fact was I needed to get this fixed before I left on the trip tomorrow, but it was late in the day and I knew the local tire guy goes home early on Saturday and he’s not open on Sunday, so I was thinking I’d have to postpone leaving tomorrow, but then I had a thought. I had another spare in the garage I just had given to Marty, but he hadn’t come by to get it yet.

So I got the other spare tire out. It was white so it needed some black paint, so I cleaned the rim up a bit and sprayed it black. 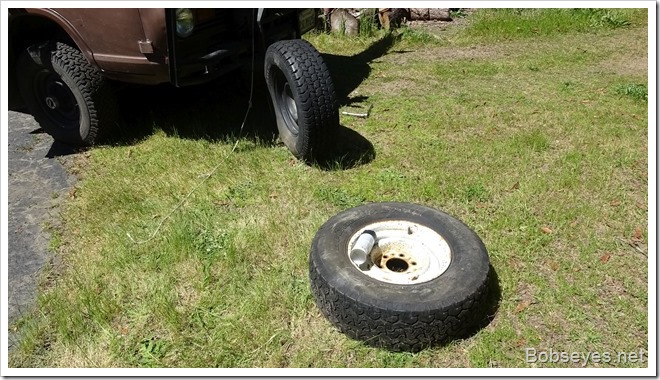 This spare fits better than the other one

The new spare’s width is a little less than the split one, so it actually fit on the mount better. 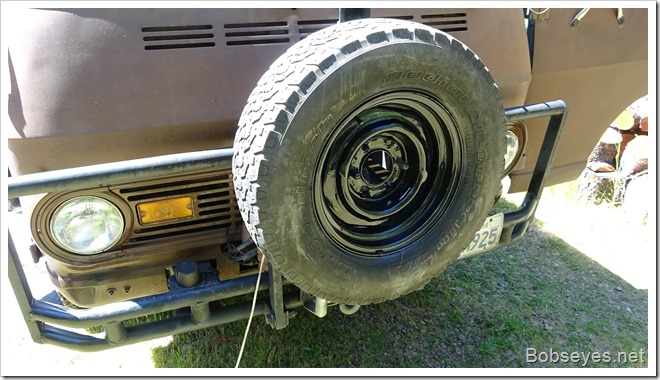 Next I spent some time loading my boat and all the stuff that goes with it. There’s not much room in the van for the boating equipment so I have to stuff a piece here and there where ever I can.

Lucky this screw in the tire was short

While I was at it I noticed this screw in one of the tires and thought, oh no, now I have to get that fixed.

But I lucked out and the screw was only about a half inch long and hadn’t penetrated to the inside, so I removed it.

Here’s the screw in the tire after I backed it out a little. 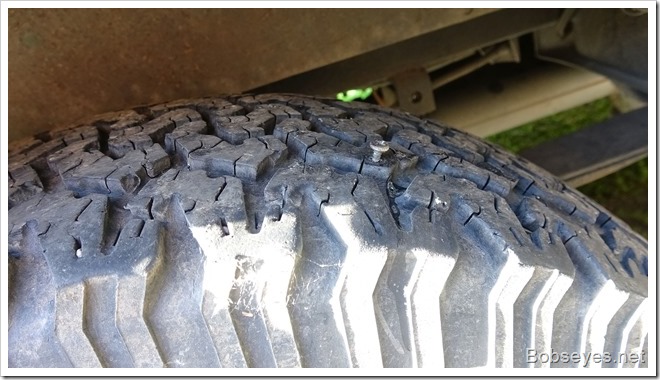 I continued loading stuff throughout the day taking my time.

Here I’m just getting the boat on, but have most of the other stuff packed. 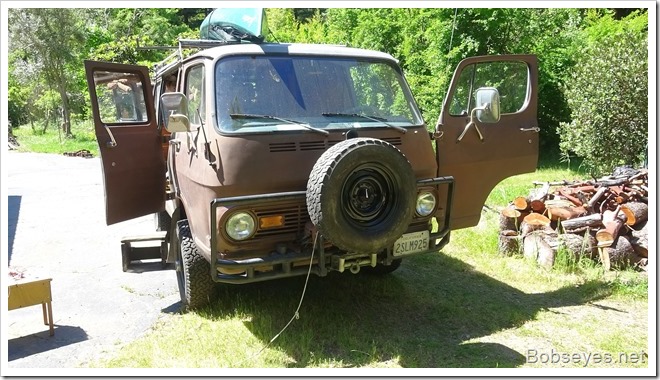 Had to  make sure the garden would get watered

I spent some more time adjusting sprinklers in the garden and put them on timers so things will get watered while I’m gone.

I went next door to see what my brother was up to and arrived just in time to explain to him how to install a new ceiling light he was working on. I shot the bull for a bit then went on home as it was starting to get dark.

Last thing to do today was clean the van’s windows

One last thing I needed to do was clean all the van’s windows so I got the stuff out and cleaned them up.

My plan is to load up the last food stuff tomorrow and head on out towards Winnemucca Nevada. Almost anyway. I like to camp on the north side of where highway 95 south comes into highway eighty. I have a nice spot up by the power poles that is just far enough away from the highway and away from anyone else overnighting by the highway.

I plan to be there tomorrow night and then move on the Winnemucca the next day. Since it’s a week day I will try to get some maps from the BLM office in Winnemucca.

So, as always, my internet access will be limited and I may not get to post for a few days or so.

On the way to Troy Oregon

My plan is to head over to the Jarbidge area in Nevada and spend a few days before continuing on to Troy Oregon where I’ll spend some time with my boat on the Grand Ronde river which should be fun. Hopefully Ill do some other interesting stuff while at Troy. Troy is a little town in north eastern Oregon of about ten houses out in the middle of no where, my kind of place.