Two Dirt Bike Rides, Some Visiting and Checking Out the Hermit’s Spring

Need to check on the Hermit’s place

What to do today. I was thinking of the hermit that lives up in back of the state park and was wondering if he got home or not. Just before the forest fire his spring went dry and I was going to help him fix it then the fire came.

Around noon I hopped on the dirt bike and started out for his place the long way as I wasn’t sure I could ride the dirt bike through the park anymore or not. But about half way there I realized I didn’t have my camera with me and so I did a dirt bike ride through our property to check things out and then back to my house where I needed a rest after the bike ride so a short nap was in order before taking off again.

I ran into these fire guys working on putting out any small spot fires before they became big. I stopped to chat with them then took off for Robert’s house. 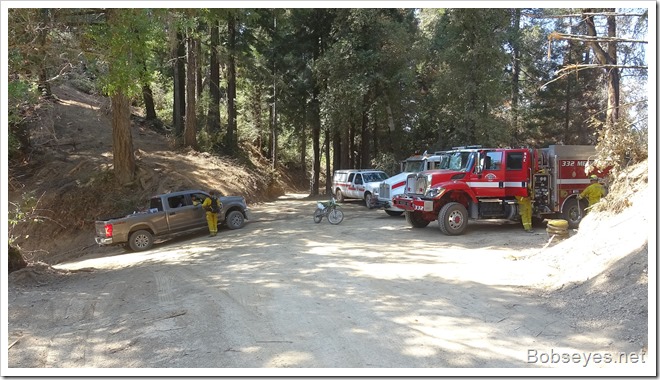 On the way to Robert’s house I get some good views. The brown trees got burned by the fire but there’s still plenty of green trees the fire only burnt under them and didn’t scorch them. 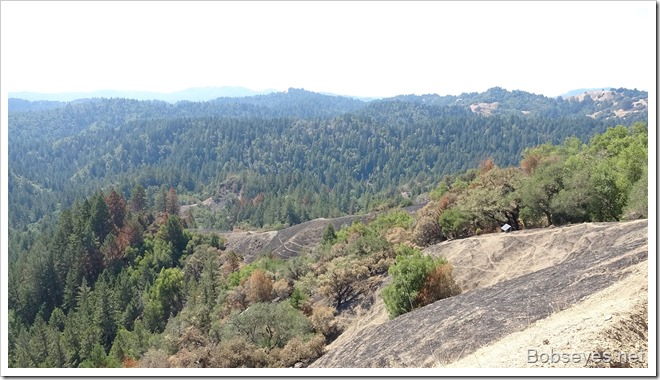 Robert wasn’t home and was out on a dirt bike ride himself, but  his wife was home so I chatted with her for a bit before saying I’ve got to leave and get on with it or I wouldn’t get to the hermit’s house before it got dark.

Here’s another view as I started down towards the park from the hill top up by Bull Frog Pond. Some stuff is burnt and some stuff isn’t. 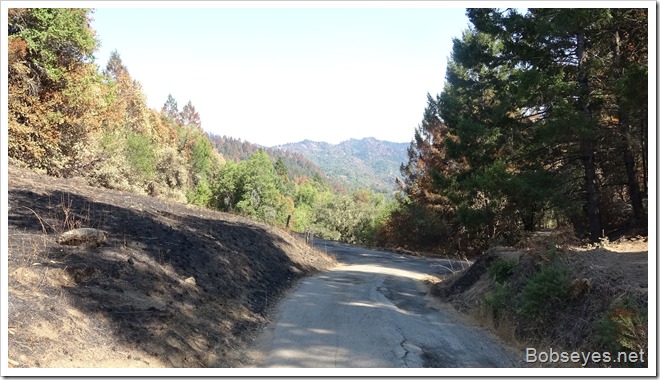 Headed to the Hermits

I rode down towards the park and turned onto the hermit’s road where I ran into these park trucks that the guys were working on putting out small spot fires down the creek from here. I could hear them working. 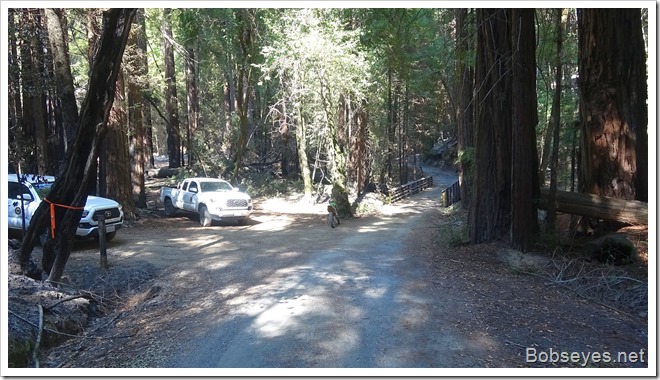 The hermit’s place wasn’t far from there so I rode up to his place since his gate had burned down.

It didn’t look like he got home yet. Later I found out he tried to get home but the road block guards wouldn’t let him home for some stupid reason.

I rang the bell just because I like to and no one was home. 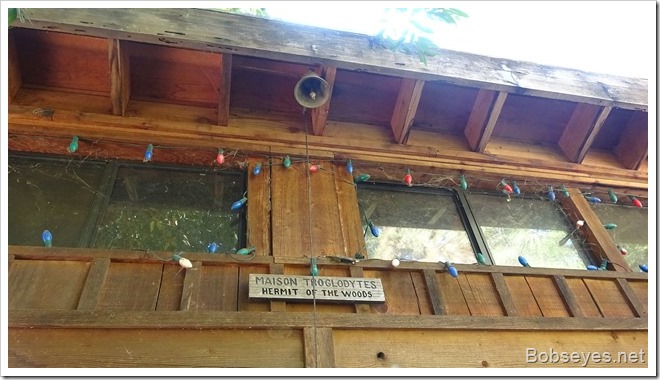 Getting up to his spring

I’d come up to check on his spring water spring.

To do that I had to climb the steep hill behind his place going through here where the fire had burnt. 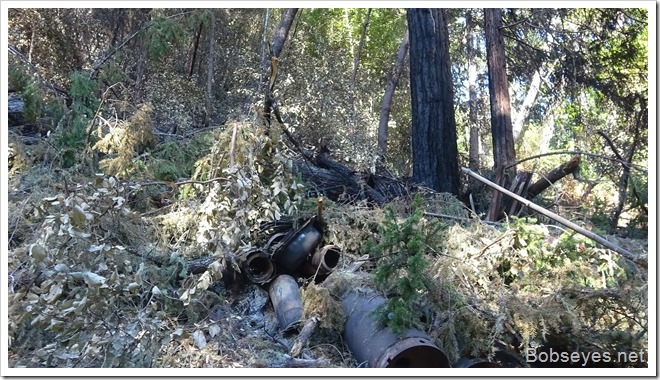 I got around that but then ran into this big fir tree that was well charred. I was able to walk up the big branch and over but got my hands all black during the process. 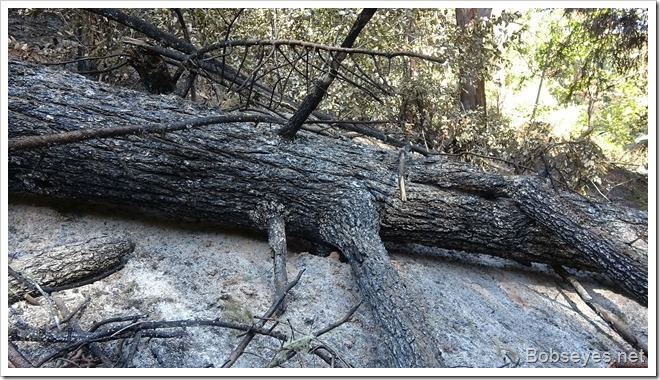 I made it up to his water tanks where I discovered all the black plastic water pipes coming from his spring got melted and burned up by the forest fire. 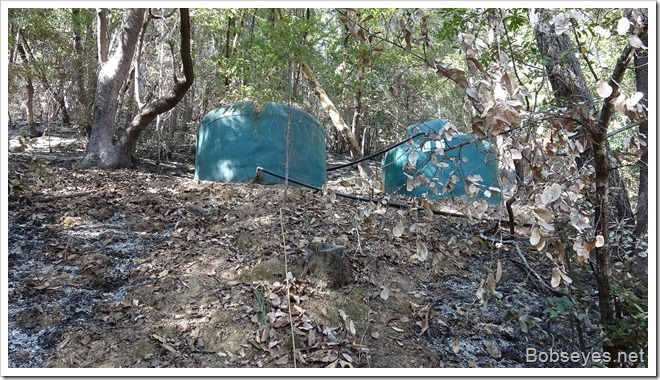 Getting to the spring

So I needed to get to his spring which was up above the water tanks and a very steep ravine with not much of a trail. I went through here being very careful not to slip and slide down into the ravine. 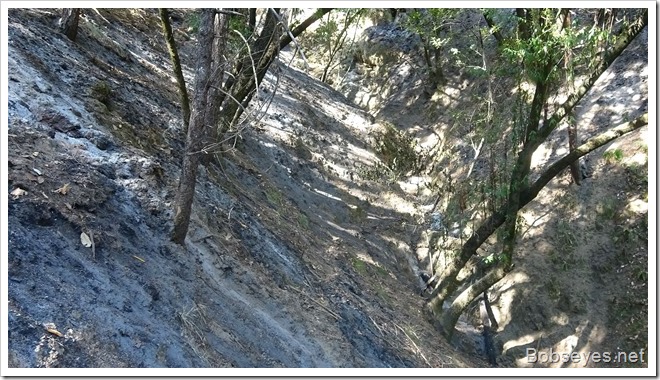 All his black plastic pipe to the spring had been burned up.

Spring’s covered up with dirt

When I got to his spring I could see burned sticks and dirt had slid down the hill during the fire and covered his spring box up and looked like this. 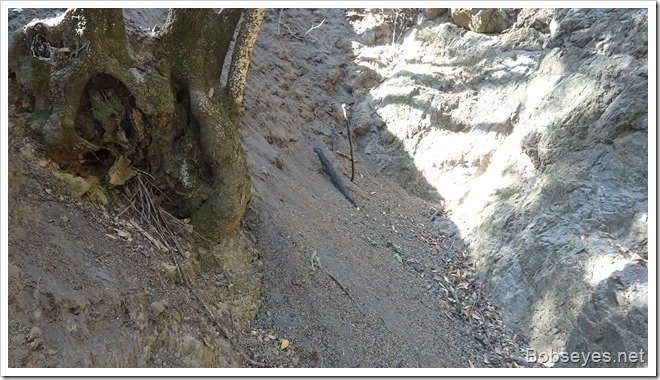 The dirt was real loose and I figured I might be able to use my hands to uncover it so I started working on it…….But. 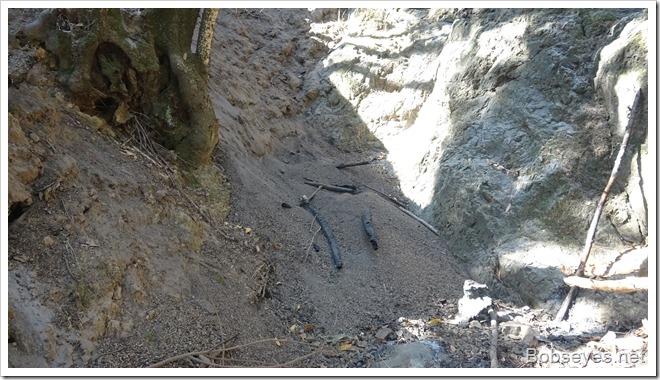 As I got down into the dirt about a foot I found the ground was very hot. Too hot to dig with my hands so I got a big stick and tried that a bit, but gave up and decided a shovel would be needed to do this job so I’ll need to come back with a shovel to get started repairing his spring tap.

I used that stick to dig but gave it up for now. 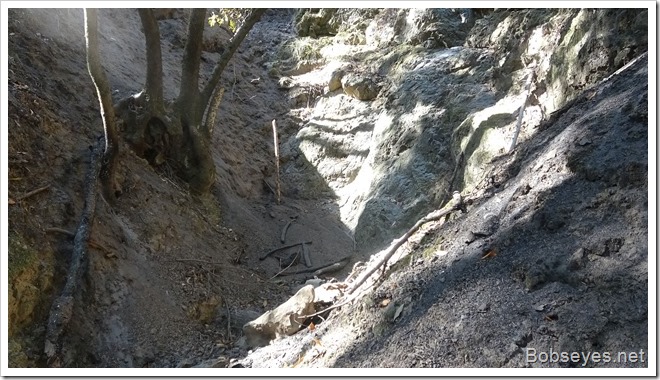 I had to walk along the right side with no trail as I went back down. I made it without slipping as I went real slow as not to slip. I’ll need to dig a trail in here to get stuff up to his spring to repair it. 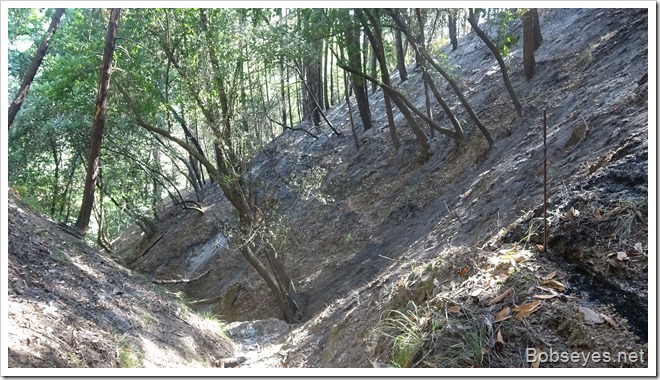 A big mistake the Hermit made was not putting a trail in here for when he got old as this is all real steep and slippery stuff.

Dirt bike in the park

I was debating whether to ride the dirt bike down through the park or not and decided what the hey. It’s still closed and I know most of the people down there now so off I went.

I ran into this fire truck in the park. The guys are watching for hot spots or flare ups from things moldering from when the forest fire went through here. They’ll have to be watching this stuff until our rains come in a mouth or two. 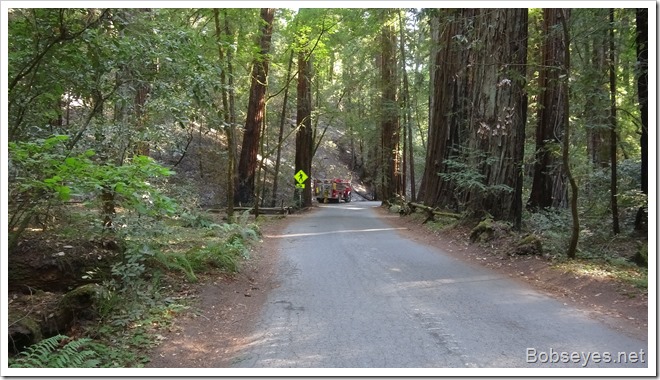 I was looking for one of he park guys named Brandon and heard he was at the parking lot so I rode on down there and found him getting ready to go home for the day. He’s the one sitting on the trailer. I told him what I was about and asked about the Hermit and he told me he got turned away by the road block but he shouldn’t have been. Sometimes the road block cops do too good of a job and don’t use there own heads. 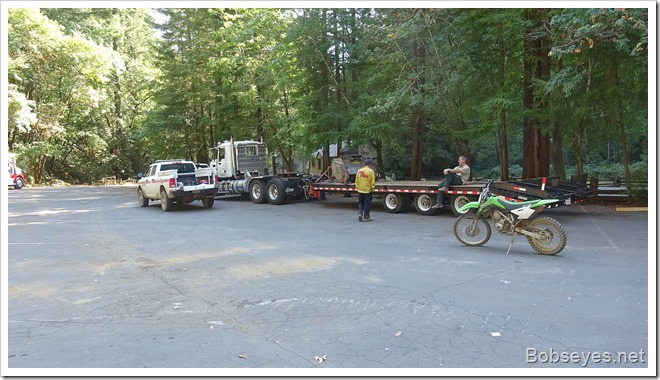 I rode on home where I needed another nap before going out and enjoying the yard in the evening. I heard choppers going over just before dark. They were putting water on any hot spots before dark as it’s supposed to be hot tomorrow and they don’t want this fire to flare up and get started again. 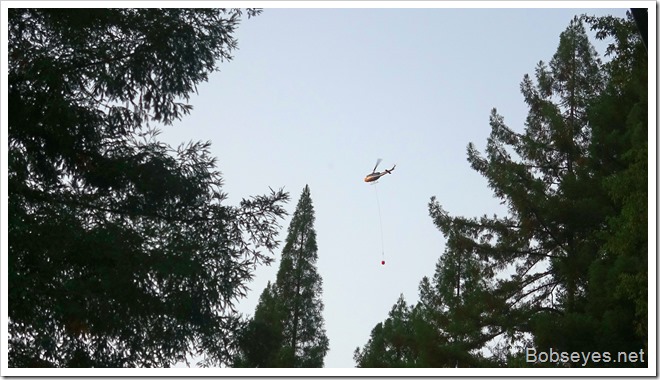 I had some nice dirt bike rides, did some visiting and some work at the Hermit’s place.

Nice day messing around in the woods.

1 Response to Two Dirt Bike Rides, Some Visiting and Checking Out the Hermit’s Spring