Turned Around by a Washed Out Road

Traveling up the road

I took my time getting it going this morning at the Gold Creek Guard Station, since I was the only one there it was nice and peaceful.

Going out the road back to the highway I went through this guys farm yard. He was pulling some kind of dirt masher behind him. Not sure why as I thought it was mostly making a mess. 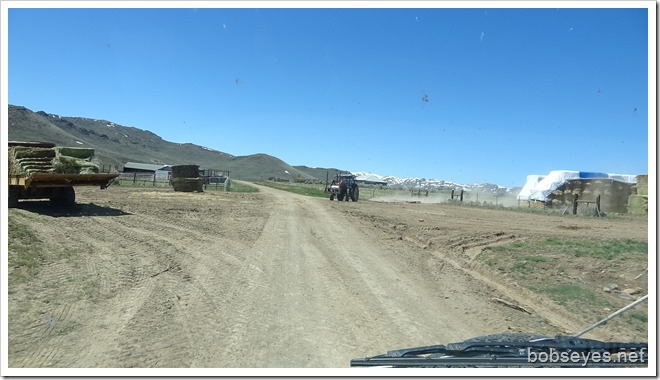 The road I was traveling, Gold Creek Road comes back to highway 225 here at Wildhorse Reservoir. I turned right towards Mountain City. 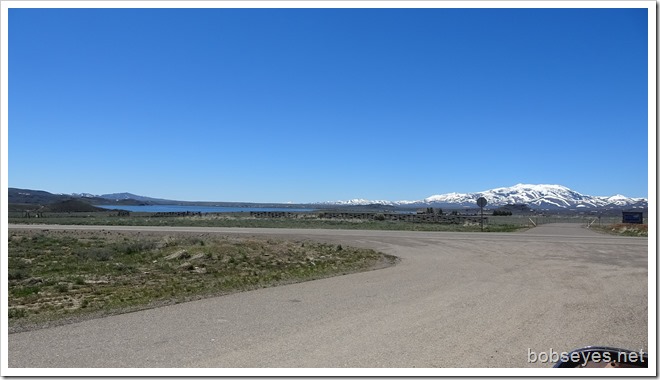 I was hoping the old store in Mountain City would be open by now and maybe they’d have internet, but when I went through town all his stock was covered up out front with tarps. Something must have gone wrong for the delay as all that stuff was out there last fall when I went by and it should have been in the store by now.

I continued on to the Duck Valley Indian Reservation and stopped in their computer lab building to do my internet stuff.

Once that was done I continued north on 51 to the reservation store where I gassed up the van. Then I continued to almost a place called Grasmere. There was a lake there where I was thinking of spending the night.

Thinking of spending the night here

This is Grasmere Lake where I was thinking of camping. 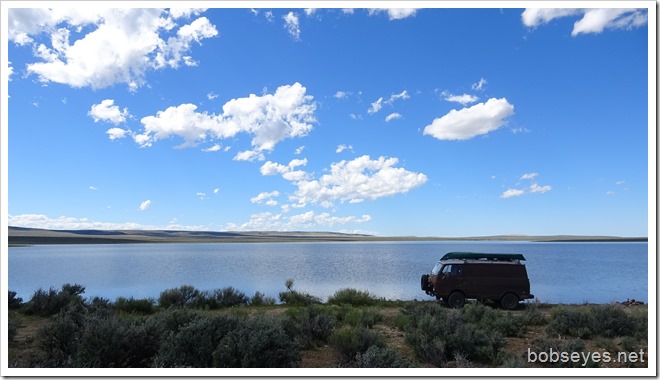 It was still early in the day so as I was resting there at the lake I was thinking I should take the road from Grasmere to a place called Roland where there was a camp place I liked called the McDonald Ranch. I checked the map and it was only 33 miles of gravel road, so off I went.

This was the road I traveled heading near where the snow is to Roland. 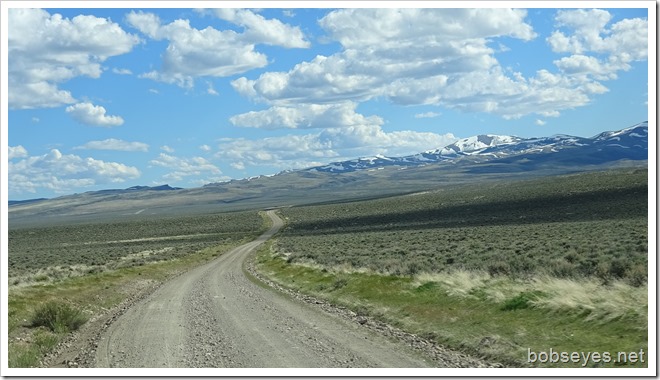 I was getting closer and thought I would make it all the way……….but 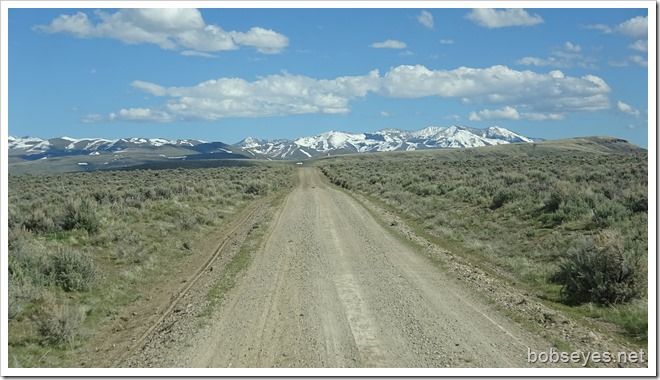 Creek is in the road no go

The road came off the table I was traveling and dropped down into the river valley through this ravine. Only trouble was a creek went down that way too and they had a lot of water this year. 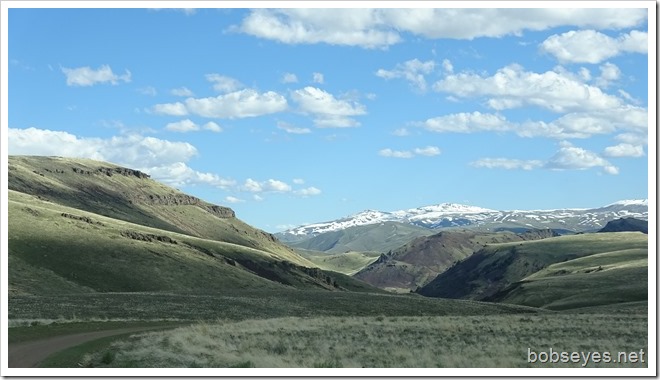 I started down the ravine and didn’t get far when I came to a spot where the creek had jumped into the road and was going on down the road. 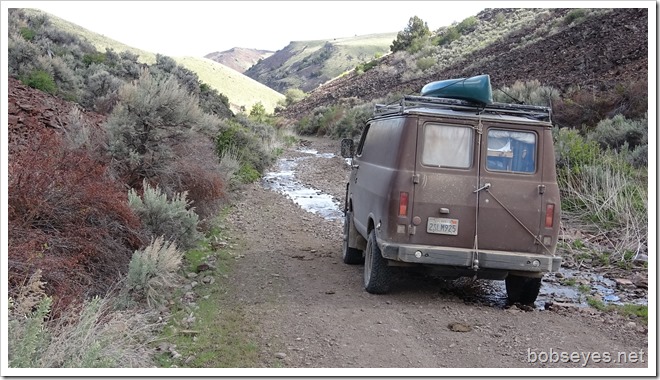 I stopped to check it out  taking a walk down the road to see how far I could get before I would get stopped.

I could get through this part ok. 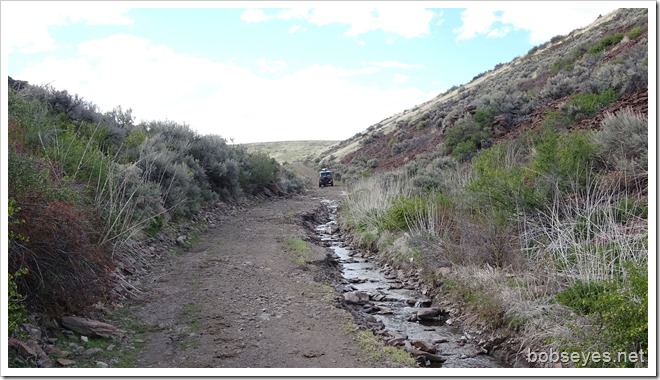 But this hole where it looked like a big truck had crossed and maybe gotten stuck was more than I was game for and walking down the road farther things didn’t get any better. 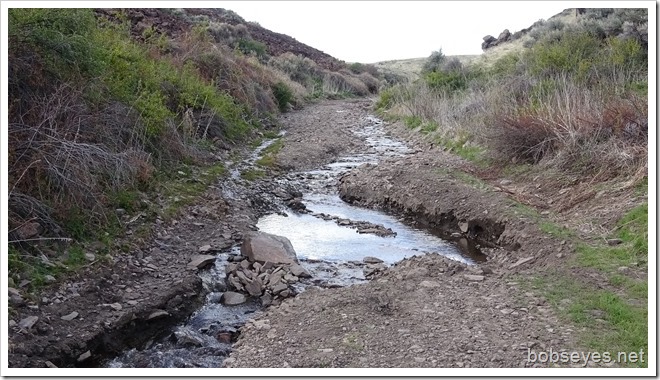 I got the van turned around and started back on the road I’d come in on as I remembered going by a camp spot that looked pretty good, so I went to find it.

Here it is. It has a creek going by in the trees and lots of marmots in the area that are pretty skittish like they’ve been shot at. 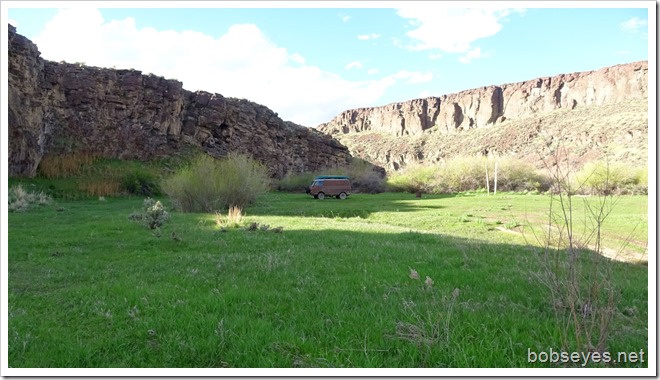 I parked the van and got out and looked around a bit checking out the rock face where I spotted these swallow nests. No one home yet. It’s early spring here. 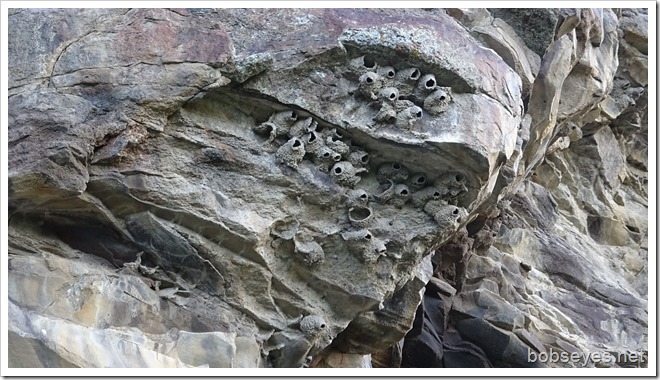 Here’s another angle of my came spot for the night just before dark. 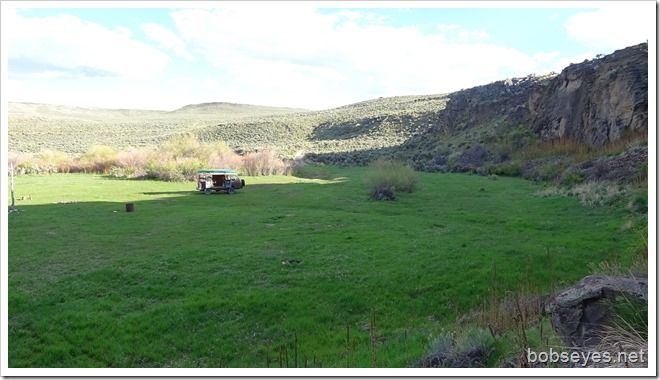 It’s a nice peaceful spot as long as the marmots leave me alone tonight.

Camped near the town of Murphy

This morning I got on the road that goes north out of the Duck Valley Indian Reservation, highway 51. Just before I got the the town of Bruneau I turned onto highway 78 and continued that way headed most west with a little north in there too. I was going along the Snake river basin, but most of the time I couldn’t see the river.

Highway 78 was mostly paved with some gravelly washboard too. 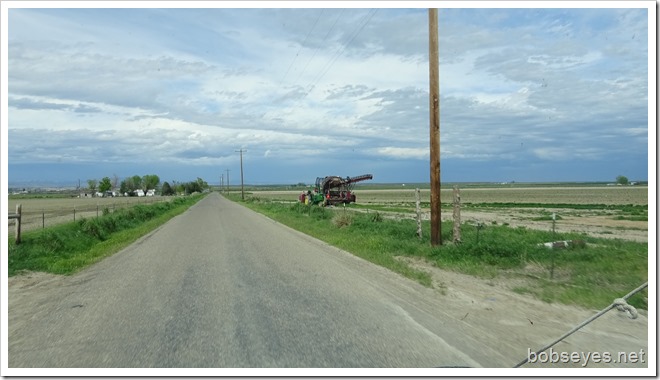 I went by cowboys working cattle in more than one spot. 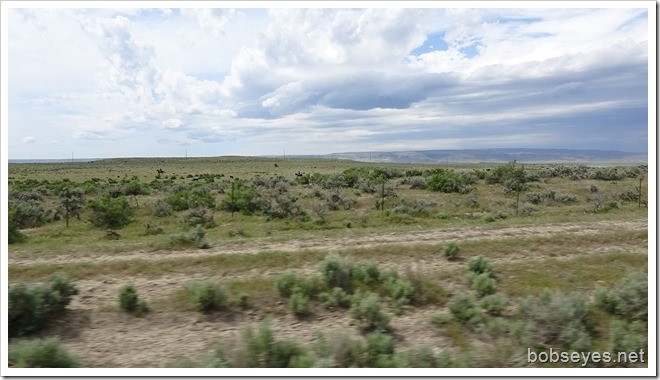 Eventually I came to Murphy, a sorta little town,  which looked to be mostly agriculture support for this area.That it what you see. 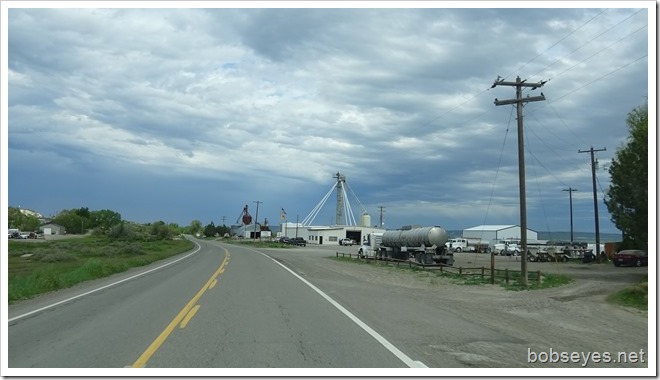 I was thinking I needed to find an early camp pretty soon or I’d be out where there where lots of people with not much camping. There was road going south out of Murphy so I traveled down it for awhile going down a little four wheel drive road to the Snake River where a rancher had some big pumps pumping water and making too much noise for me.

Here’s the road I traveled down. 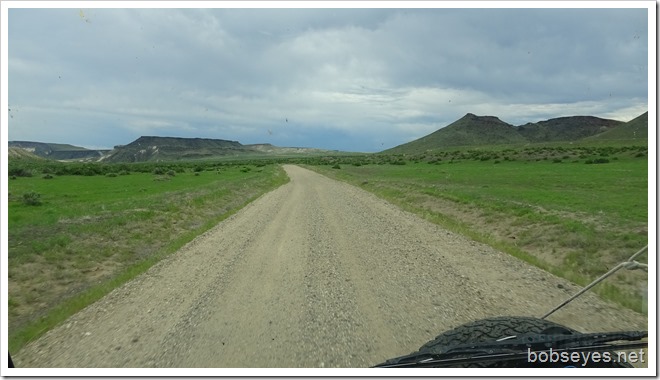 And the four wheel drive road took me down the river. 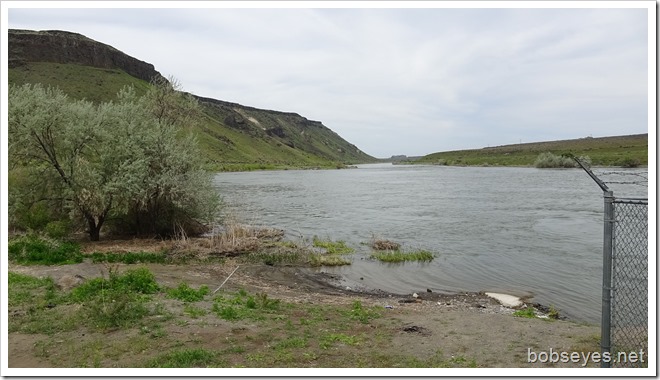 I saw this male mallard duck and that was about it. 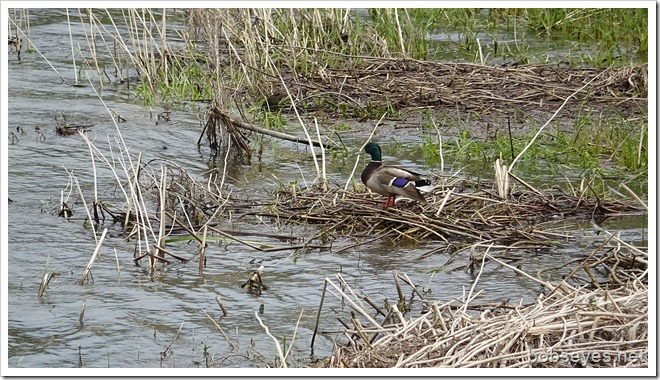 With the noisy pumps running I didn’t stay long and drove back up the hill.

I remembered a spot on back a ways on the road I came in on that looked acceptable so I drove back there and parked and walked around a bit.

Here’s where I was thinking of camping for the night. 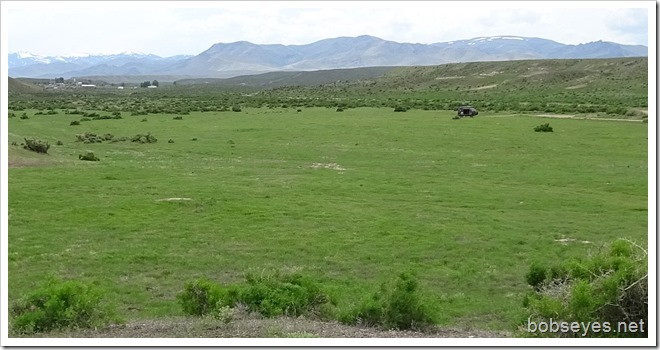 Here I’m returning to the van after my little walk around, with Murphy in the background. 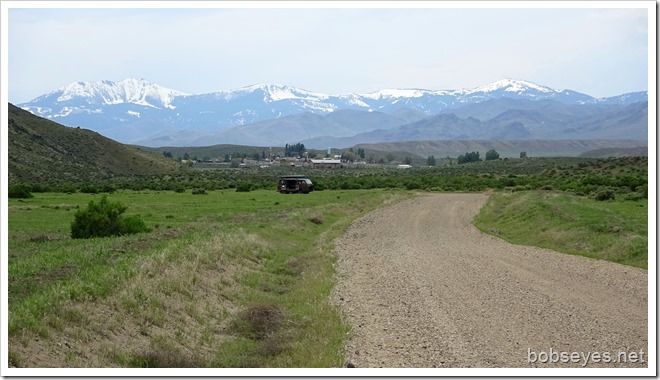 Latter I decided to move across the road to another spot that was a little more  off the road.

While there about five PM I got hit by a thunder storm for about an hour with wind, rain big sleet drops and some 3/8th inch hail too.

After about an hour it cleared up for a bit so I went for an evening walk around the camp area through stuff like this. 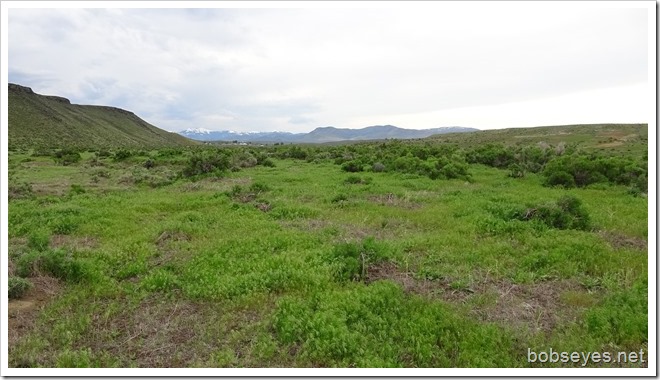 I walked up onto a little hill to look around and this is what I saw. With the thunder storms still coming in tonight, I moved the van nearer the main road but off on a side road with a mostly gravel bed in case things get real wet tonight, I want to be able to get back on the main road. 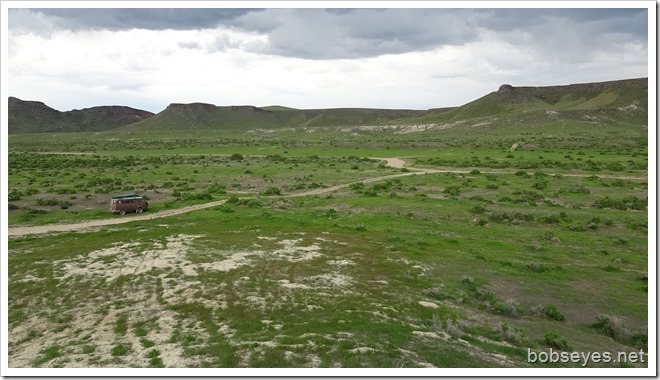 It’s now after dark and it’s been raining on and off but not really too hard yet, so I think I’m ok in this spot.

Posting this at La Grande Oregon

1 Response to Turned Around by a Washed Out Road