Marty and I plan

Marty who has a van similar to mine came by around 11 for a visit. We mostly sat around shooting the bull and discussed our upcoming trip to the desert which we’ll be off to in about a week.

After a few hours he went on home, but before he left he wanted to see if our van’s CB units would work.

I tried my CB, but non of the lights would come on, no power. He tried his and his wasn’t working either.

He took off for home.

Tracking the power problem which was me

I got my meter out and sure enough there was no power to the unit. I followed the wires and found it was simple. I had wired the unit to my extra battery I installed and I hadn’t turned on that switch. I turned on the switch and it lit up, but that still doesn’t mean it will work. Marty is bringing his little hand held radios just in case.

I started work on this automatic chicken water unit I made for the chickens out of this flout I bought. It overfills and leaks water in a day or so.

The problem I was having is it was going over the top eventually. I thought it might have something to do with the fact it was rated at 50 pounds max. and I had 60 pounds on it, so I added a hose pressure regulator the other day and still had the problem so I was thinking it might be leaking where the hose was connected, but I couldn’t see that part as it was under the board I put on top to keep the chicken stuff out of the water so that needed to be removed to see if the input hose was leaking.

Here’s the unit with the top board up to see where the hose goes into the float unit. 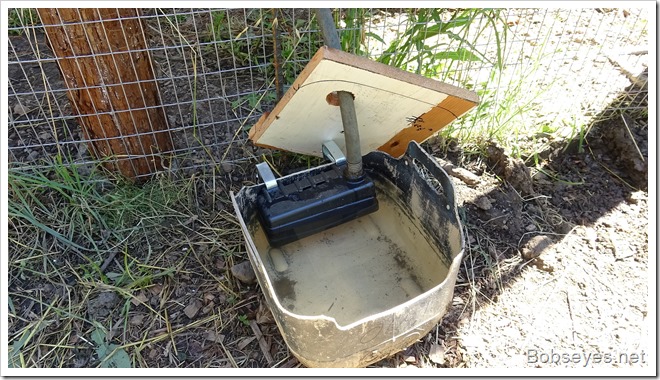 And here’s where it was leaking

And here’s what I saw when I looked at the hose input. Water so it was leaking. I tried to tighten it up but it only leaked worse. 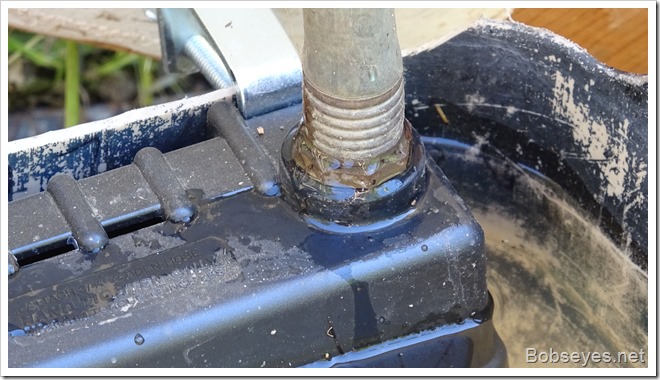 I checked he hose end and it was a nice brass one. 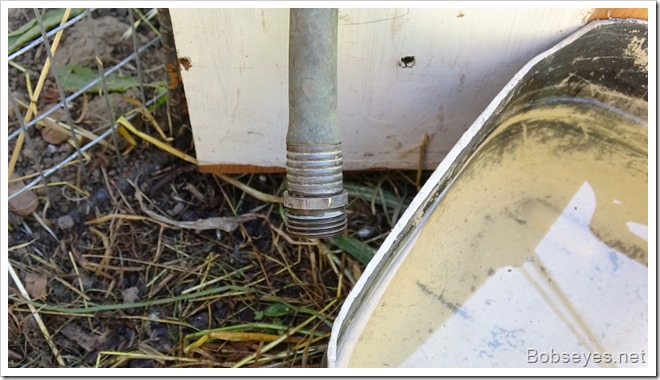 So I put another brass hose end on that looked like it had a flatter end and it still leaked. I pretty much discovered that the rubber washer that was supposed to seal this up was too soft  and going into the end of the hose fitting and not sealing so I found a nylon hose washer that was stiffer and tried that and it sealed up right away so that was the fix.

And installed a  pressure regulator too

Just to be safe I located a 30 pound pressure regulator I had that had hose fittings on it and installed that too. But all it really needed was a good washer. I wonder how many other people had problems with  this because the company who makes the flout used too cheap a washer and anyhow, how expensive can a good nylon one be?

Anyway I sometimes am amazed how much time I spent getting some stuff to work properly.

Putting some stuff in the mulch boxes

After a good break I was back outside checking on the peeps and putting a little mulch material into my mulch boxes being careful not to hit any chicks that were in there looking for stuff.

I dug a bit here for some worms for the chicks. The little bit of grass mulch really brings the worms into the soil along with it being wet too. 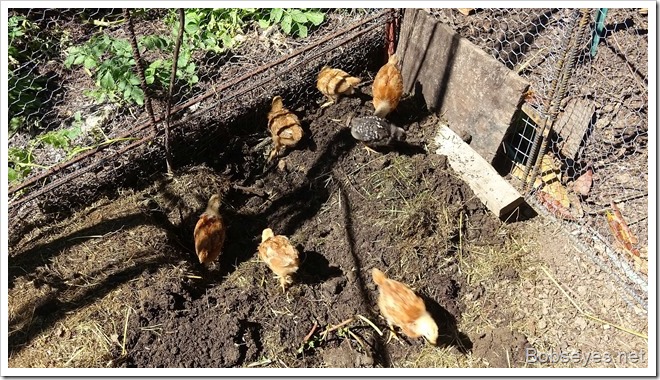 The grower panel is working out pretty well. The chickens seem to like the fact they can get to the top of the plants and the grower panel protects the plants so they can keep growing. Most of this grass is millet from some bird seed I bought. I raised the panel about an inch just before this picture which slowed the chicks down some as now there weren’t as many tops to eat, but there will be shorty as the stuff is really starting to take off. The chicks can also get into the millet plants behind there where they are not protected. The plants behind the grower were planted a week or so before the ones in the grower. 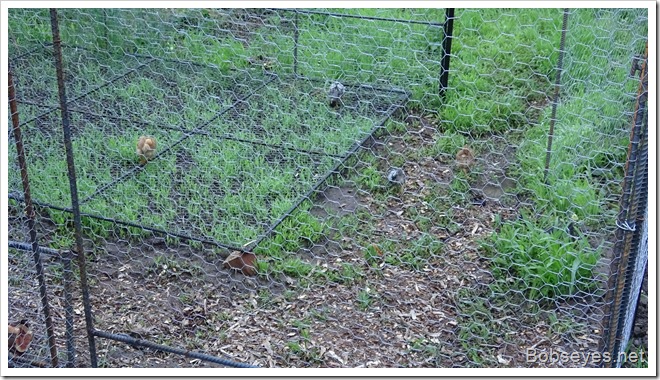 I also planted a few seeds. I wanted to have some cherry type tomatoes in my garden as I like to eat some when I pass by, but the first seeds I planted didn’t come up. I went down to the creek to get a bucket of sand and am trying the seeds in there. I also planted some cantaloupe in the same spot with the tomatoes.

That was pretty much my day for another good one.