Tried to paint but had to fix a leak instead

Not sure what project I wanted to tackle today, so I sat around for a bit to think about it and see what develops. After some time I decided I might as well put another coat of paint on the chicken’s nest boxes so I got the stuff out to do that and shooed the chickens out of the pen. I started painting at the top and when I got to the nest boxes under the first cabinet I found it was all wet from a leak during the rain last night.

Fixing the leak wasn’t going to be easy

I closed up the paint and put it away as now it was more important to fix the roof to stop that water from coming down into the nesting boxes. The water didn’t let the paint dry I applied yesterday. I dried things out and left the doors open to dry things out. 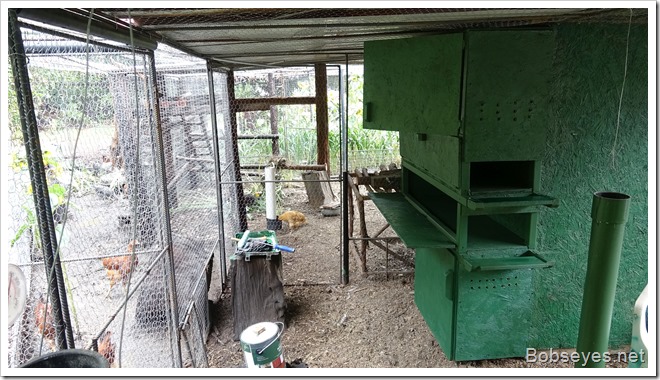 Stopping that leak presents it’s own problems as the roof isn’t strong enough for me to walk on it so I had to sit down and think about how to I was going to get up there and get the job down.

After a couple false starts I put some plywood and 2×4’s up there to spread my weight out and that seemed to work.

Here’s my work area on the chicken’s roof. 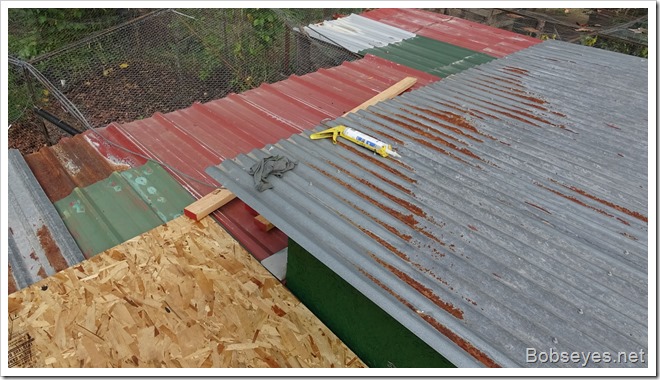 Here’s an overhead shot of part of my garden pens. 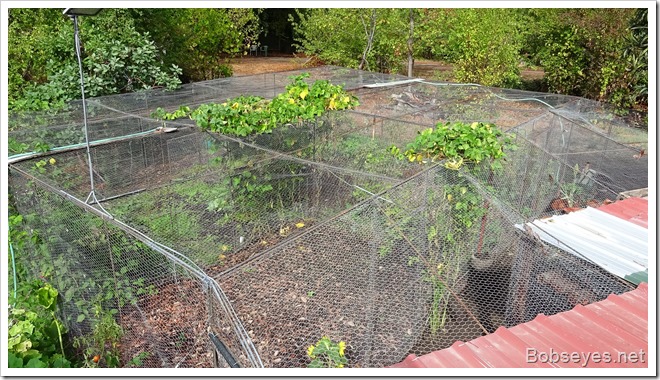 And another shot of some more of my garden and orchard. 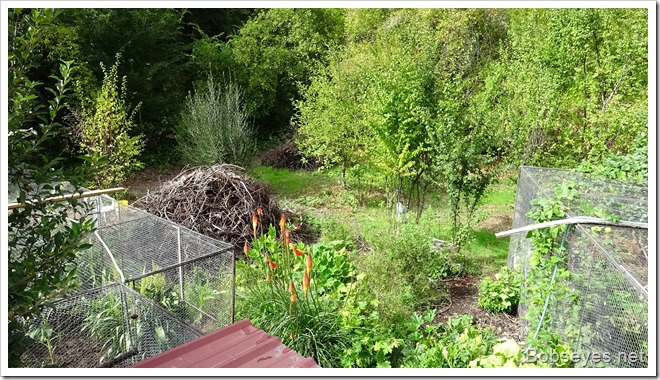 I got to work and installed this piece of flashing and sealed the top of it good which should stop the leaks from the rains. 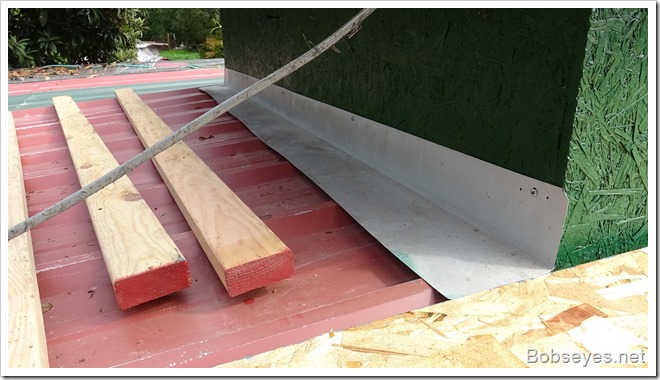 Finally have time to work on the Toyota

Well now that the leak was stopped I was able to get to a project that I haven’t been able to get to, my Toyota LandCruiser needed to be started and put in the carport so I can take the wheels off and check out the brakes.

The engine started without any problems so I removed the stuff keeping the weather off it. 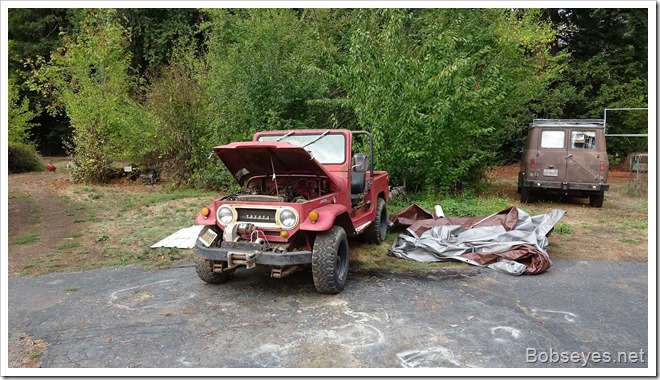 But the brakes were working too good

I let out the clutch but it didn’t really want to go. It felt like the brakes were on so I got out to have a look after moving about ten feet and backing up a couple feet it wouldn’t move. It appears the right front tire is locked up,……………………so. 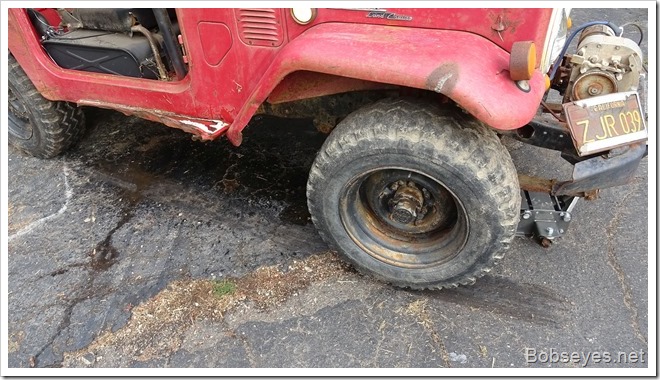 Can’t more until it gets worked on

I got out the floor jack and the tools and took it apart, not without much trouble as the brake drum didn’t want to come off. I got the book out to see which way to loosen up the brake adjustment and that helped, but I still had to beat on it with a big hammer before I got it off. 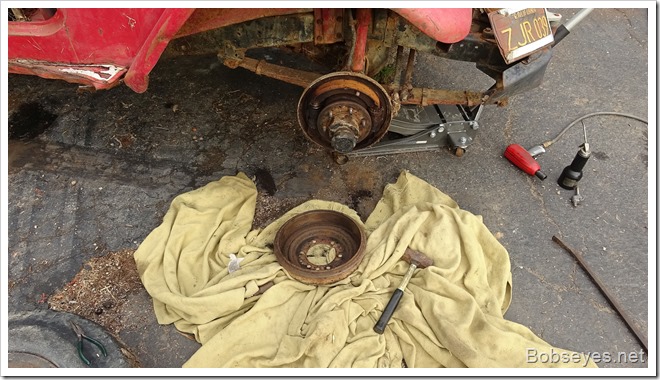 I was pretty sure a bonded brake shoe had come off from sitting around for so many years and that was the problem  of why the tire wouldn’t turn. But I also found one of the slave cylinders was leaking badly as it was all wet. 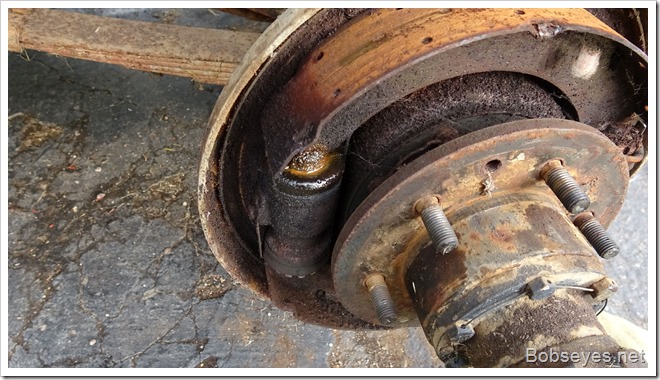 Drove into the carport and jacked it up

Well all I wanted to do was get the rig in the carport so I could jack it up and check out all the brakes so I put the tire back on and carefully drove it into the carport and jacked it up and put the jack stands on it. 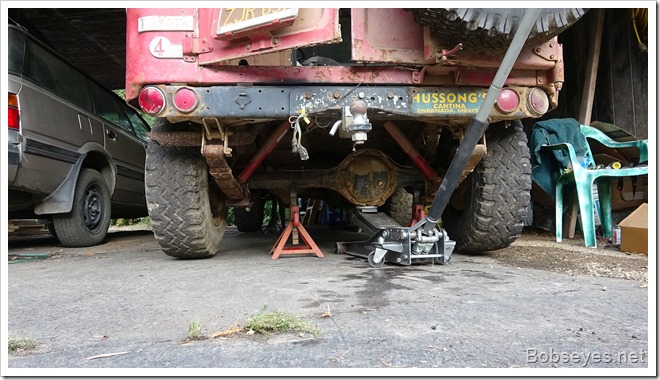 Having gone to all the trouble to get it that far, I was happy to quit for the day and besides the day was almost over by now.

That was my day, good to get done what I did.