Tracking Rats, Cutting Berry Vines and Puttering Around the Yard

Paid for the pie

First thing I needed to do today was go help with some electrical stuff to pay for that blueberry pie I got yesterday. I did dive into the pie and devoured a good part of it this morning. Yummmm.

The electrical stuff was fairly easy and I got it done.

Last night I noticed my camera under the house captured what I’ve been looking for. That was a rat coming and going to a hole that goes up into my attic that I don’t know where it is and I still don’t but I’m getting closer.

This is the picture the camera caught last night of a big rat running across a black drain pipe heading out for the night. There’s nothing to eat or drink in the attic so they have to go out each night to get stuff to eat. It’s not the best pic as it’s dark down there but the main thing is it shows what I need to know. 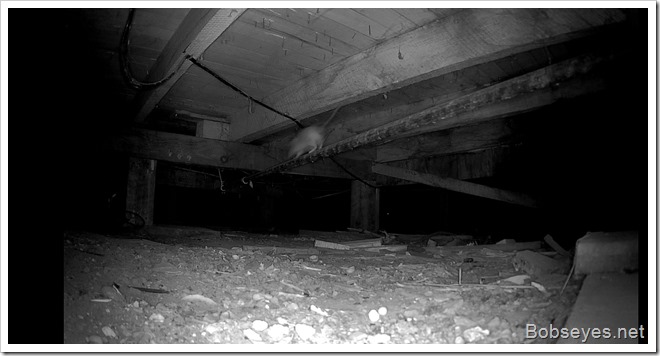 The camera also caught the rat coming home in the morning running along the black drain pipe going the other way. 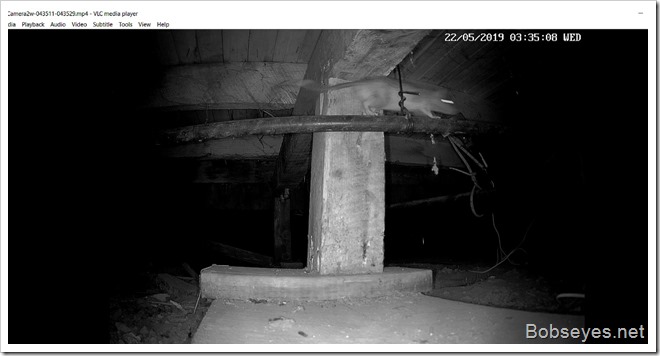 So now I know why I haven’t been able to detect the rat running on the ground under the house. And now I need to move the camera under the house to be able to see down the pipe to find the entrance hole.

Back under the house for me

That meant I was going under the house again down through this hole in the back porch. 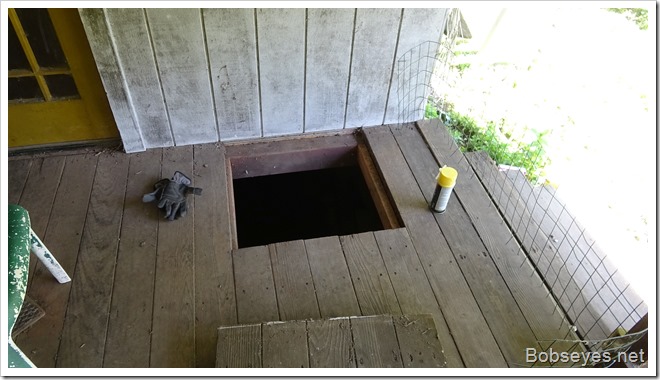 I put on my coveralls and slipped on down there. It’s a bit dark but bright enough to get around. 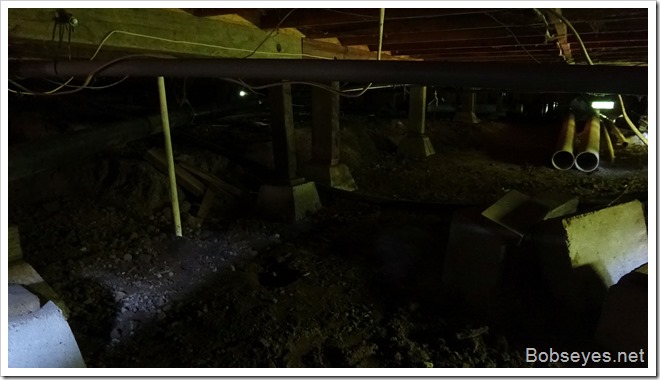 I found the camera and moved it to a better spot. 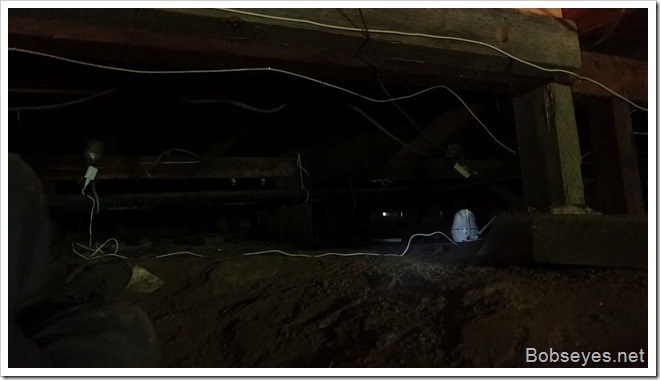 Here’s the new camera view of under the house. The black pipe is just under that beam and this is the end where the rat needs to be going to the entrance to the attic which I hope to find soon. 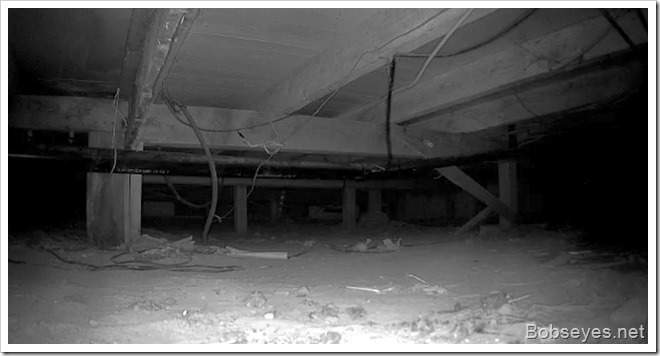 With all the nice rains we’ve had this winter the weeds and berry vines are really growing so I got the shovel and dug up a lot of the black berry vines and there’s still plenty more to work on. 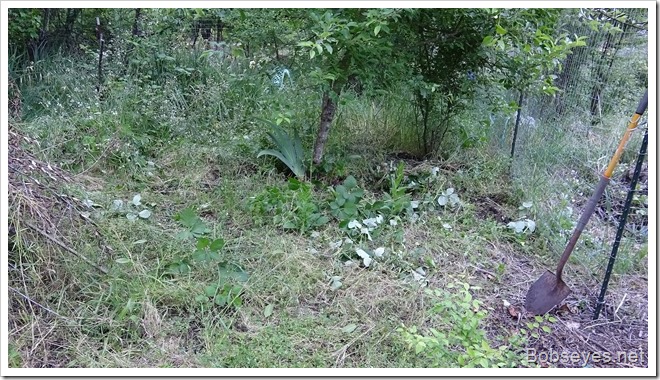 The bush on the right is a black berry vine I dug up there were lots of them. 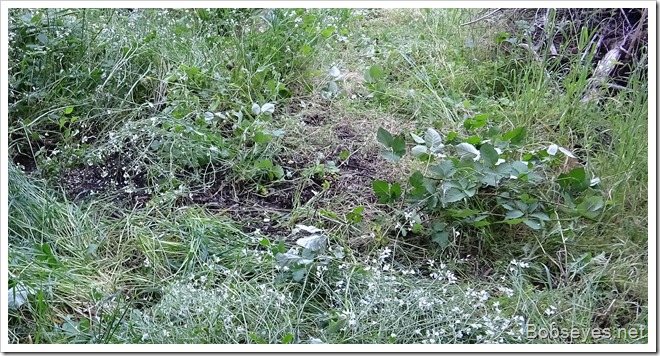 My automatic chicken door opener that they step on in the morning to get out to graze is working pretty good. I needed to move the weighted paint can to this new spot to get it out of the way. 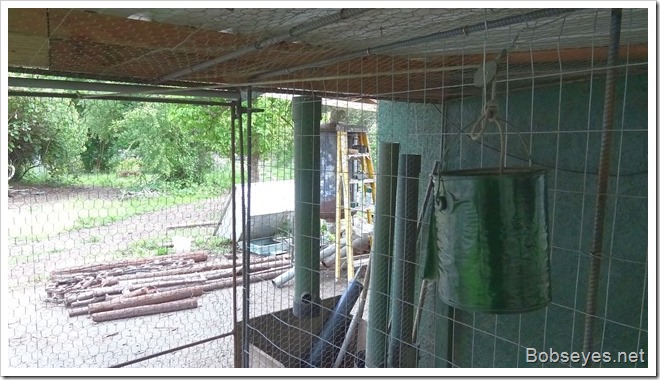 And while I was moving that can I decided to mount a paint can on the other main chicken pen door so they could open that one too in case I kick them out of the other pen.

I got the paint can up and weighted but that was as far as I got with that one. I still need to make the latch part and put some paint on the ugly old can. 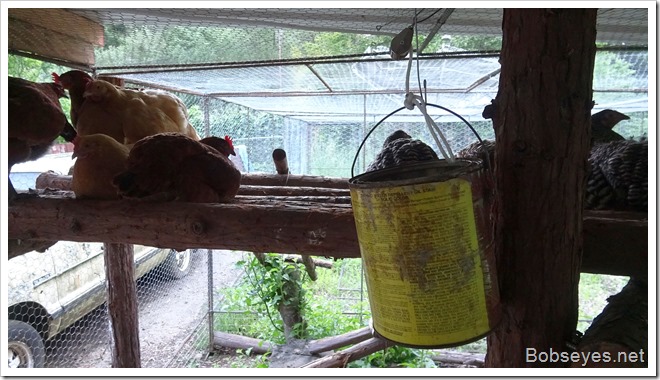 Other then that I did the usual chair hopping and puttering around the yard and had a nice day.

(Visited 128 times, 1 visits today)
This entry was posted in Uncategorized and tagged automatic gate opener, tracking rats, under the house. Bookmark the permalink.

2 Responses to Tracking Rats, Cutting Berry Vines and Puttering Around the Yard