It looks like I have enough parts to get the new master cylinder to work on my old Toyota so I started with that project today.

Marty had loaned me his double flare kit tool so I was able to do double flares which most brakes require.

Here’s the kit in action as I flare the pipe ends to make a splice as the old brake line nut is metric and the new one needs an SAE nut to make it all work. 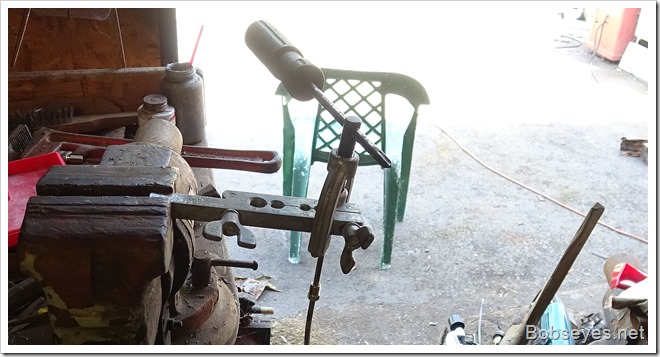 Of course I couldn’t find the pipe line nuts I had to make the splice. I knew I just had them, but what happened to them. I looked all around several times and was about to give up so started to collect the tools and I found the nuts under the flare kit box so I continued.

Here’s the brake line that I’m modifying with a splice and a new end that’s the right one. 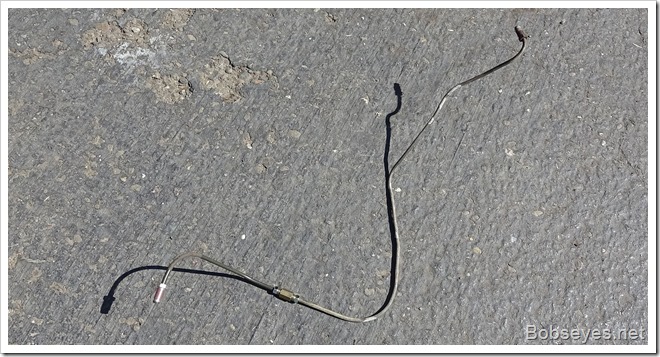 Close up of the line splice and new nut I installed. 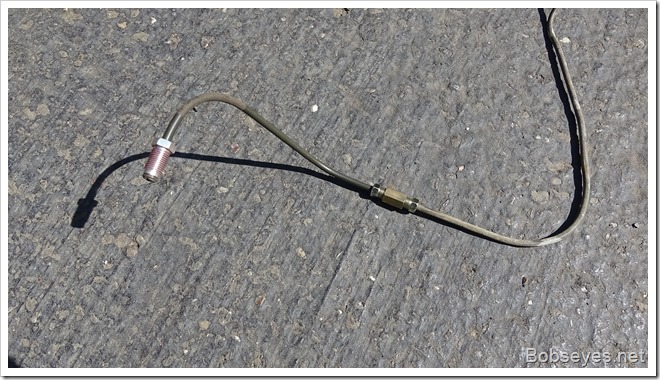 I put that aside for now as I wanted to work on a van project that needs done.

My shifter rods won’t stay where they are supposed to so I kluged a clamp on them but I haven’t been happy with the repair. It works but the clamp wants to fall lower on the rods which is making it hard to shift so I have an idea. 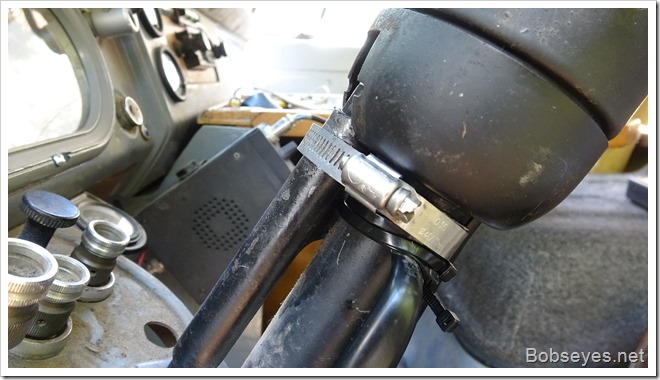 I removed the clamp and measured things up for a bracket. I had some half inch plastic so made this bracket out of it. 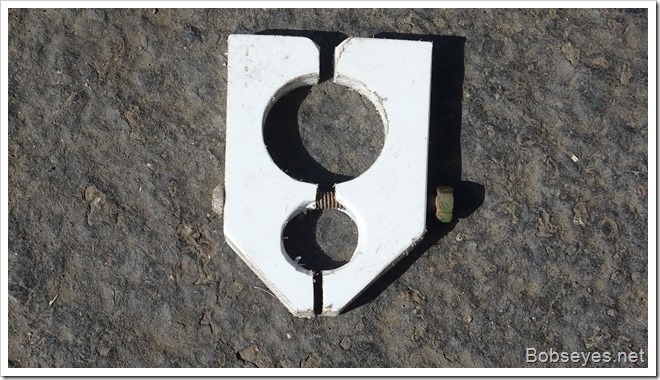 I thought it would look better black than white so I got the black paint out and put some paint on it. 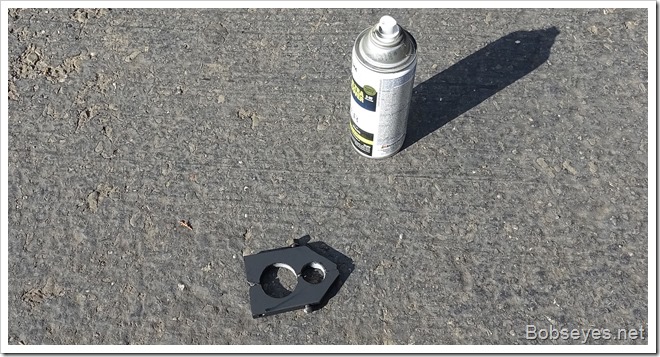 I installed it and tried the shifter out and I was impressed as it fixed it right up so it shifts much better now. I need to get some quarter inch bolts to finish that project off as I only had one and I need two. 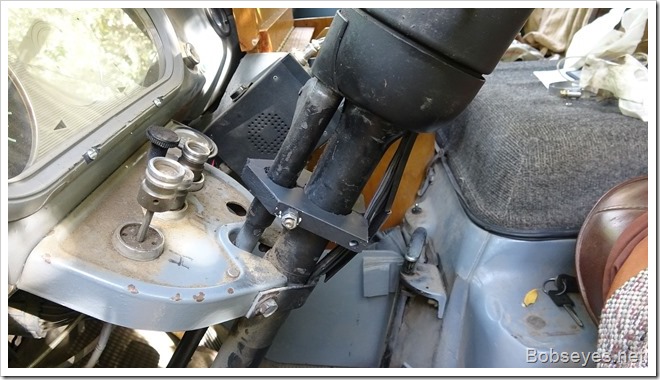 I was happy that worked out as well as it did as one thing I don’t want is trouble with the gear shifter while out on a trip.

After a break I cut some rebar to make some more grower panels.

Here I’m cutting the rebar to size with my power hand band saw. 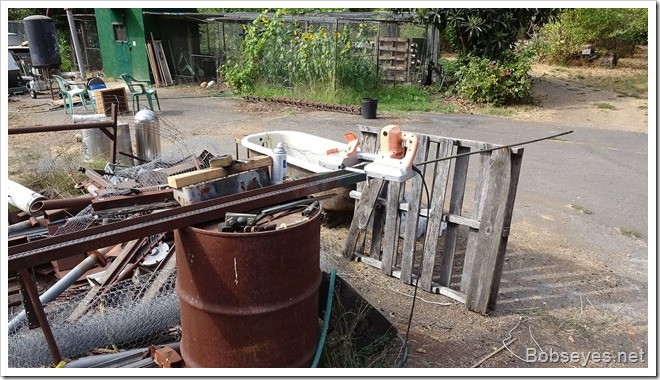 Here’s most of the rebar cut, but I found out I hadn’t cut enough, so I cut some more. 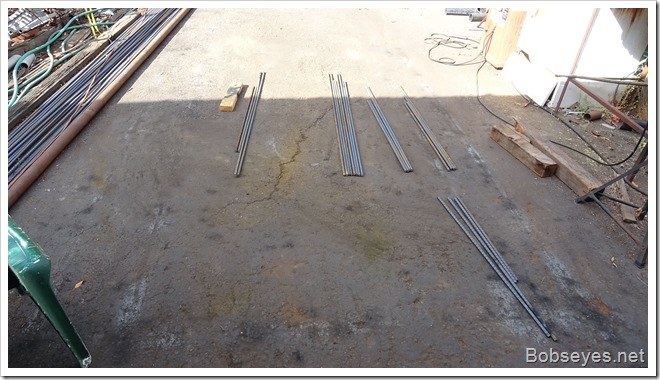 Once all the rebar was cut I setup for welding and welded up the panels. I still need to put some inner support rebar in them to  hold up the wire but it was good to get this part done. 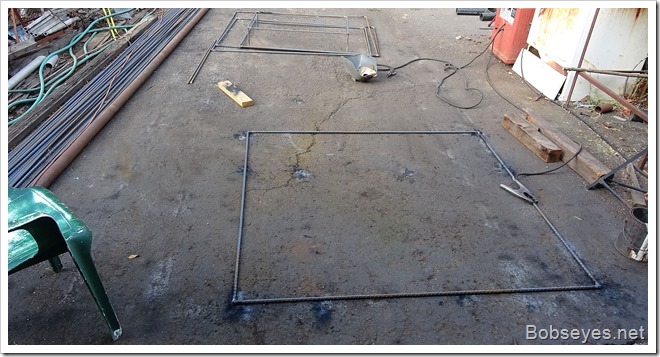 Hooking up the master cylinder

Just before dark I was chair hopping around the yard not really wanting to do anything, but I picked up the Toyota master cylinder and started hooking up the brake line I’d spliced earlier in the day. 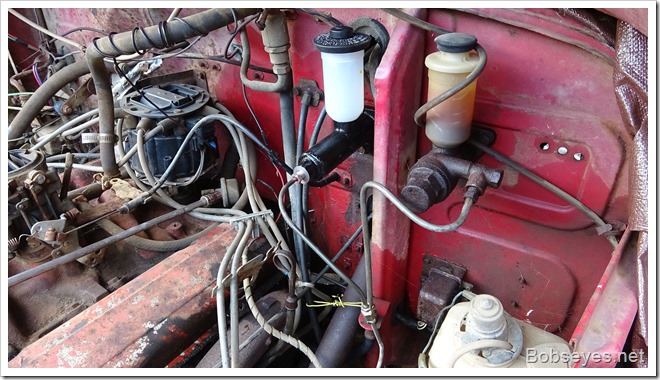 It went on fairly easy once I had everything right and it all worked out. I filled up the reservoir with brake fluid but didn’t want to bleed the brakes yet as l need to check the wheel cylinders I think at least one of them is leaking.

Even though I just puttered around I got quite a bit accomplished working on those three projects, so a good day.