I started out checking to see if the Toyota would start after cleaning up the battery terminals the other day. It didn’t. It turned over a tiny bit and then nothing.

I checked the water and it was real low in all the cells so I filled them up and tried again but no go, I think it needs charging now but maybe the battery is shot. I got another battery sitting around for the bulldozer and that didn’t turn it over either, maybe that one is shot too as it’s been around for awhile. I checked a bunch of stuff on the Toyota such as fuses and wires but it just wouldn’t turn over at all.

Later in the day

After some thought I got the old van battery out and put it in the Toyota and it turned over. Of course I messed with this for a couple hours on and off thinking I wouldn’t get it going today. 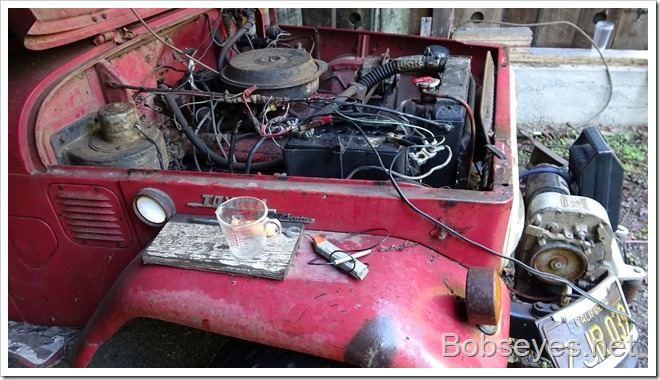 While I was thinking on that I got my chicken butcher area set up as I need to get that task done soon. I have about sixty chickens and need to get that number down to about 25 so I have my work cut out for me. I’m thinking of doing about a dozen a day. 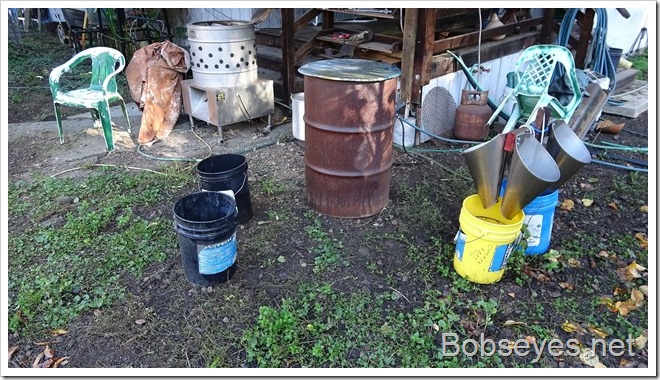 I didn’t think I’d get the Toyota started today, so I decided to remove some dirt from here so the gate would open better. 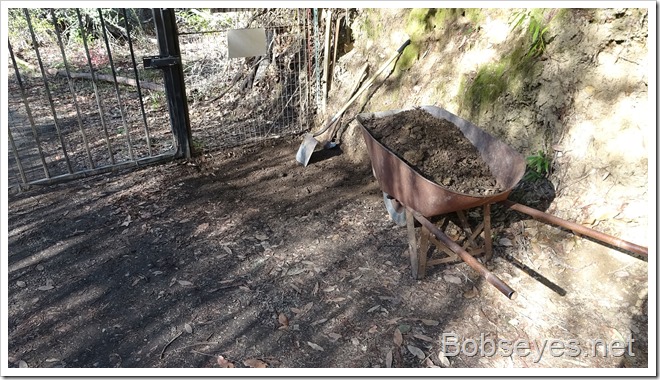 I got carried away and did this whole section about six wheelbarrows full of dirt. 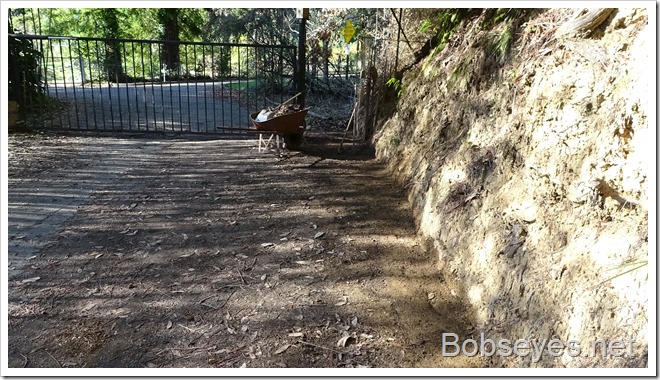 I dumped all the dirt under this apple tree as the ground has sunk a bit and it was a low spot. 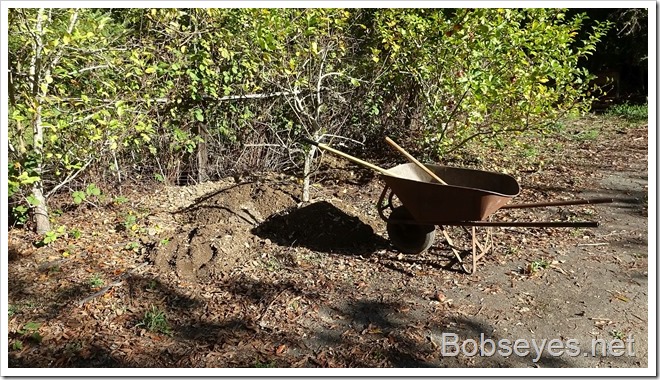 Trail work in the forest

I finally decided maybe the two batteries I was using were no good so decided to take the old van battery out and try that as I knew that one was good. It worked so I was able to drive the Toyota on up into the forest where I wanted  to do some trail work. 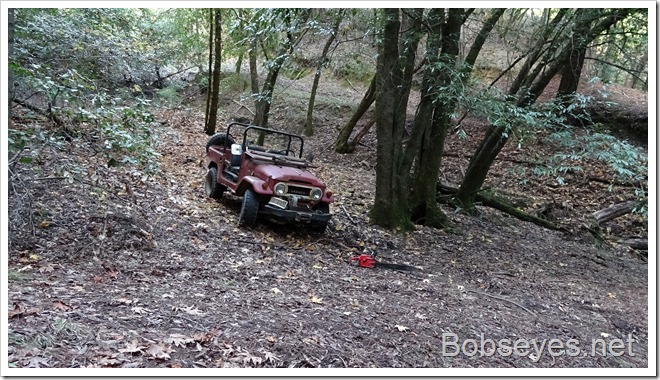 I wanted to reroute the trail through this area where all the down trees are so I need to cut them all up smaller so could deal with them. 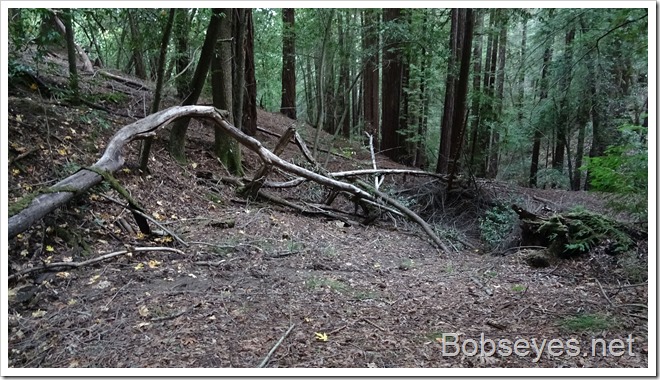 I cut them into smaller pieces and cleared them off the trail area. 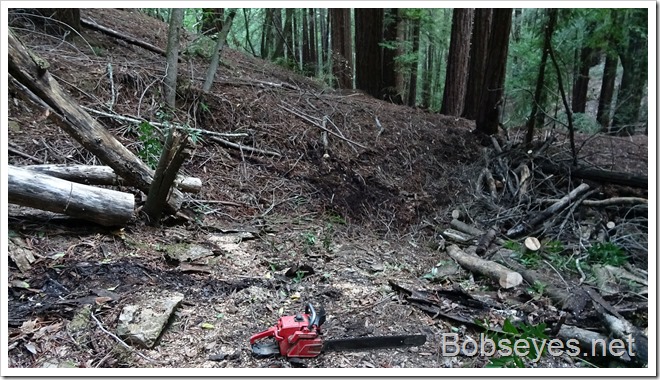 Now I can get a trail through there.

I cut this lager log to get it off the trail that goes between the trees. 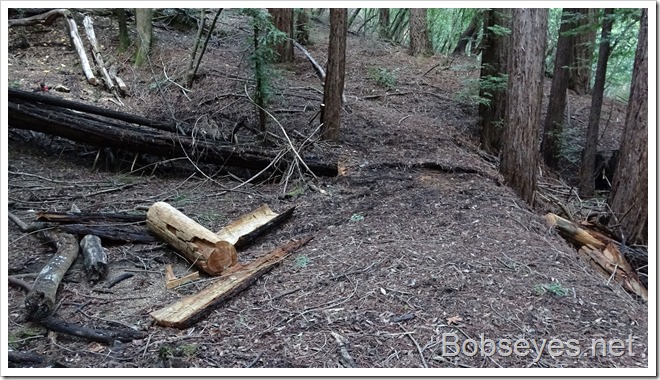 And cut these logs on the ground to get them out of my way so I can make the trail go though here. 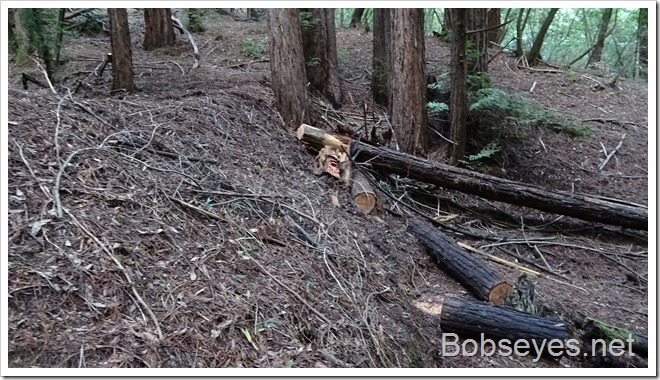 That all took about an hour and it was now 4PM.

I loaded up the tools and was heading on back when I ran into these trees across the road, so I got the chainsaw out and started to cut them but they were too high to get easily. 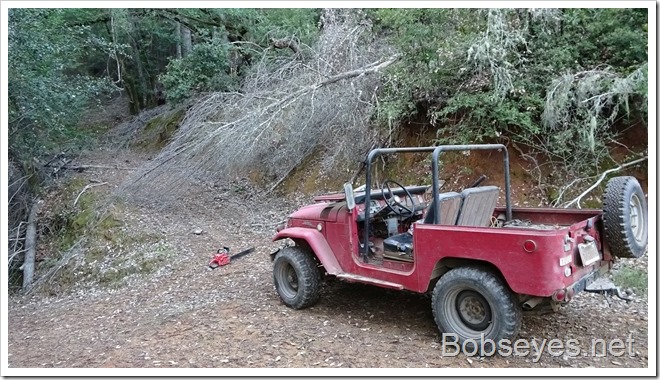 And those little branches knocked my chainsaw chain off the bar before I could get it all done. Looks like a snake by my saw, eh. 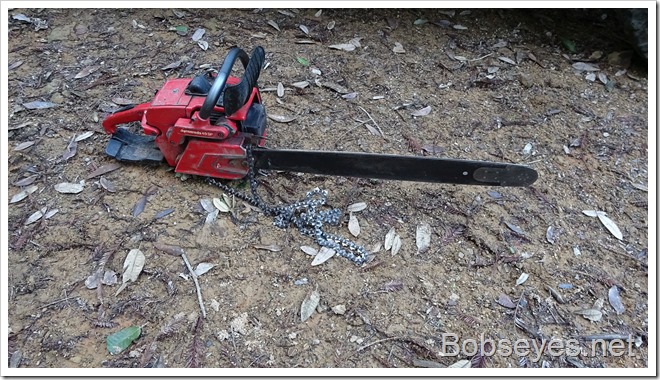 I backed up and went around another way and stopped at this rock slide by the road and loaded up some rocks, using the sledge hammer to make some of them smaller so I could left them. 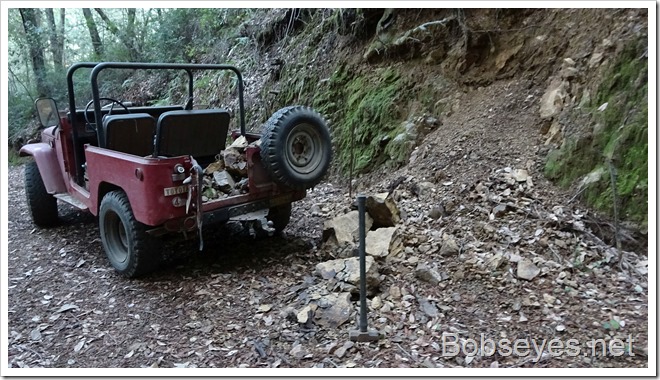 A bit at a time gets the job done

I drove down to this ditch that crosses the road and threw all the rocks in the ditch to dam it up. It will take some more rock. A bit at a time gets the job done, eventually. 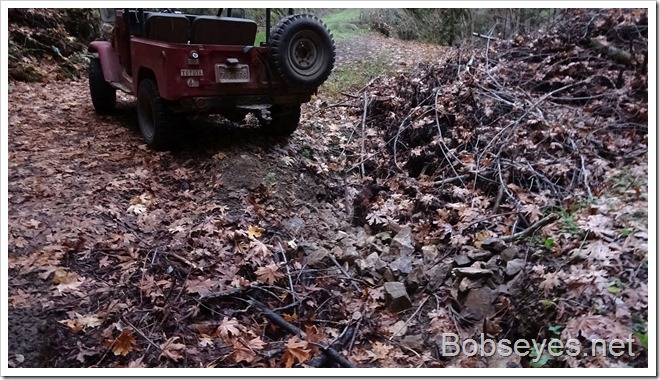 I got home just as it got dark and shut the chickens in for the night.

I have to go out after dark and pick the ones I want to butcher tomorrow.