Tom Moves Woodchips and I Do Dozer Work In the Forest

Tom has been getting the tree trimmers to drop there woodchips in my yard so we can use them for mulch and stuff. He’s been mixing them with his chicken’s manure to make dirt to grow his vegetables for the Farmer’s markets he goes to.

He’s loading up the dump trailer to take woodchips over to his garden area and made way for some more woodchips from the tree trimmers. 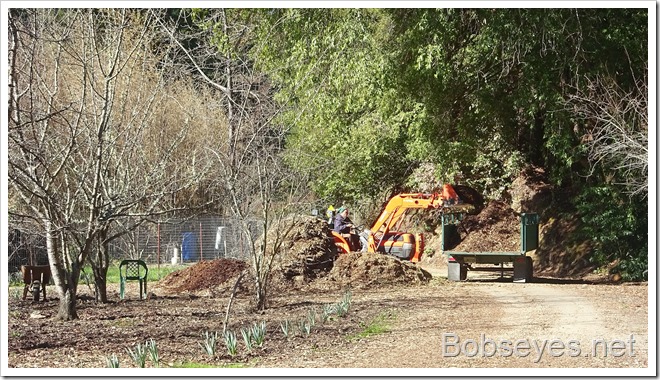 My plan today was to go up into the redwood forest and finish doing the dozer work that needed done,mostly a couple small slides on the roads and some water drainage work. I didn’t have much to do but each task was far apart so it took more time driving to each job then doing the work.

I brought some diesel up and the grease gun to lube the tractor’s blade. 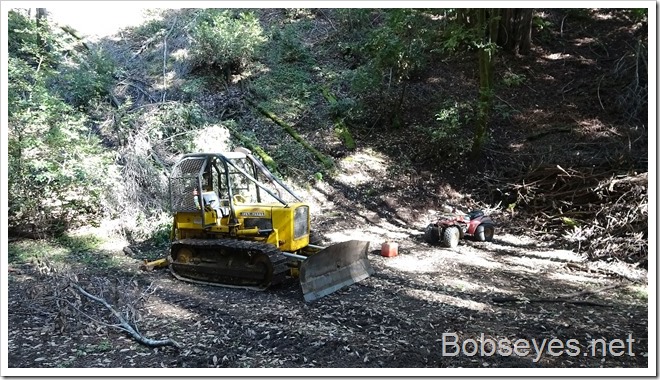 After warming it up I headed down this road to the first job, a small rock slide on a road. 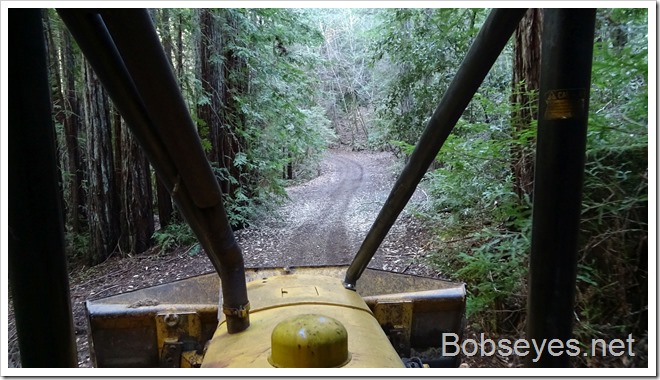 Then I drove over to here where I parked for a bit and hiked around checking some stuff out that I might do later. 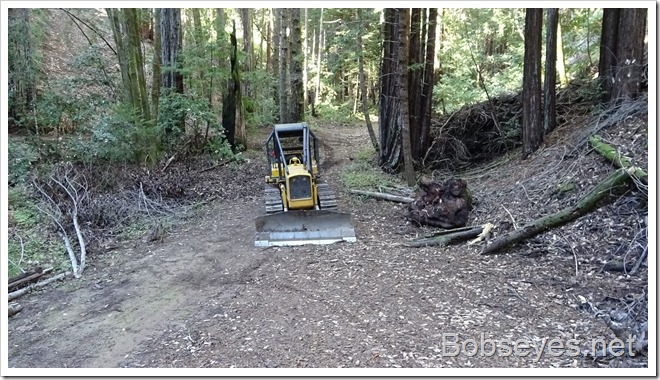 I had one more place to go and that was a fire break the fire guys made. I needed to do a bit of water drainage on it. To do that I needed to drive on up onto the ridgeback and down this real steep road to get to the job area. That road is a lot steeper than the camera shows, but the dozer doesn’t mind that kind of stuff. 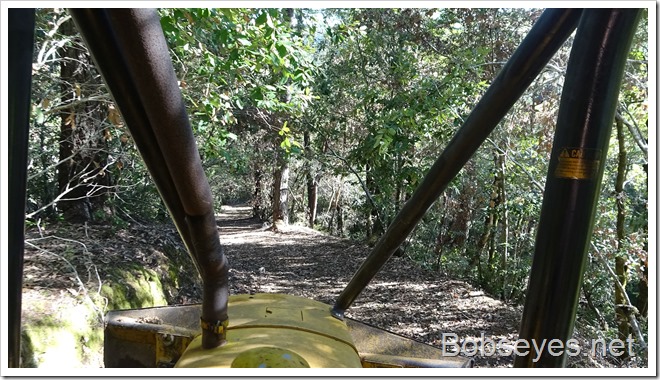 That repair didn’t take long. A couple of swipes with the blade and it was fixed and I was done. 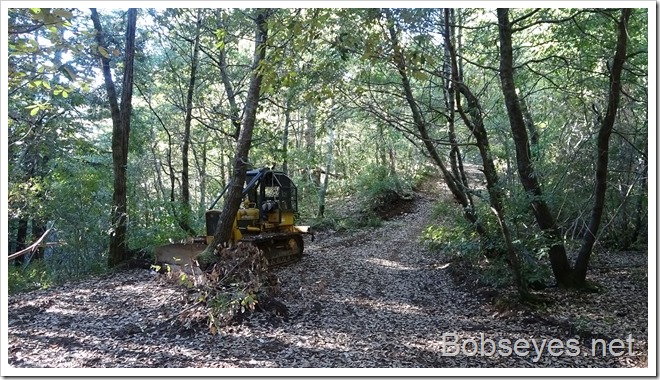 I headed on down the hill to the dozer parking spot by Tom’s garden and parked it. 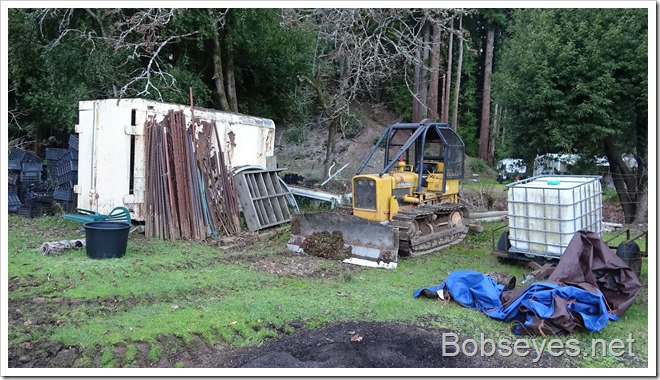 Now I had to hike back up to where the quad runner was parked about a quarter mile or so up through here. 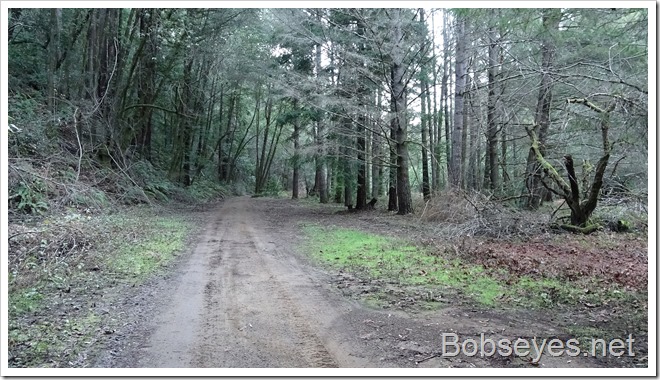 I took a short cut on this trail and ran into these downed trees, I climbed over and worked my way through them. 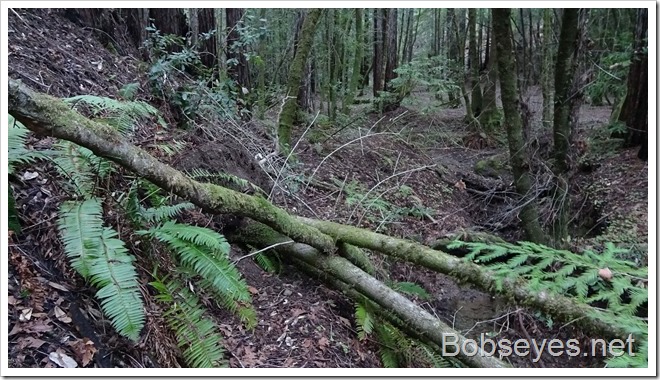 I retrieved the quad runner and rode on home.

Tom had dumped some woodchip mulch by the raspberry patch that I will have to more into the patch soon with the wheelbarrow. 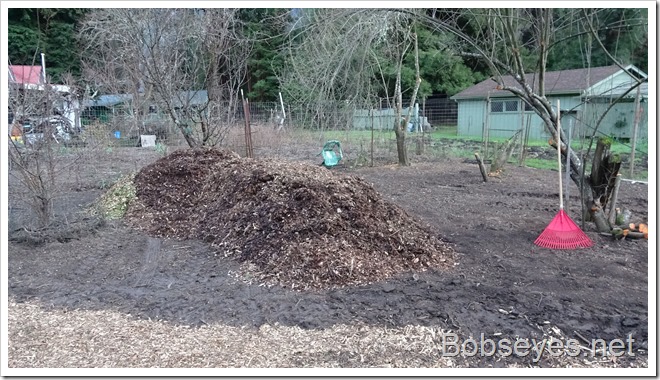 After that all I had left was chair hopping with the chickens when I let them out into the front yard to graze. Mr. Rooster there. 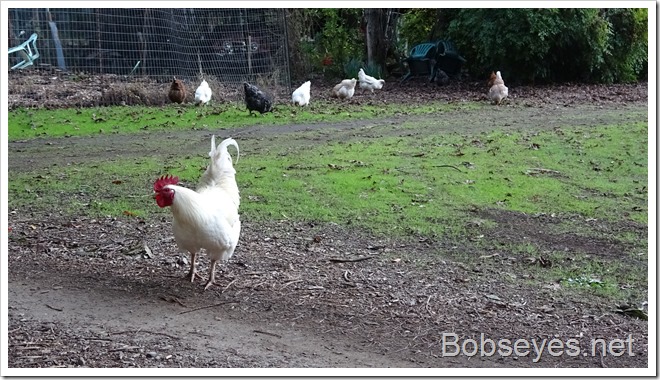 I moved over to this chair and the chickens followed me there. They’ve learned to hang out near me to avoid the evil hawks. :O) 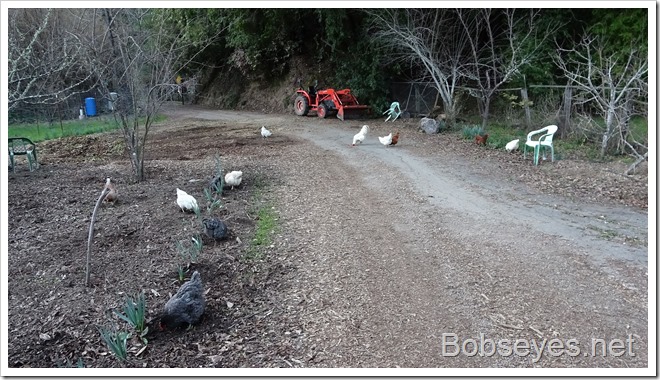 (Visited 103 times, 1 visits today)
This entry was posted in Uncategorized and tagged bulldozer work in the forest., mulch pile. Bookmark the permalink.