Todays Forest Fire Update, Updated When I Can

I decided to give an update as I’m too pooped to do much else right now.

This morning fire trucks moved in to our area to protect houses. They are mostly city type fire fighters and we are glad to have them.

Once we talked with them and we knew what we should do we spread out and started pulling everything away from our house sides, everything we could.

I worked until I was too hot and sweaty and did what I could.

There’s some serious hot spots at Mount Jackson. And there’s supposed to be fires burning at the old mines on Sweetwater springs road and that’s why the fire guys are here.

If the fire comes down this way they hope it won’t be moving too fast so stuff can be done.

I know they worked hard and are working on keeping the fires above the park in check.

The other guys are out in the forests around the area prepping things for fire breaks and knocking down hot spots. I’ve worked as much as this older body will allow so I plan to go for  a dirt bike ride with my brother later to see what’s going on.

My brother said there are ten dozers and lots of fire trucks down at the Guerneville fire house getting deployed as I type.

I’ll update when I can.

Been working harder than I want or can. :O)

This is a picture of the fire protection guys arriving this morning talking with my brother Tom. 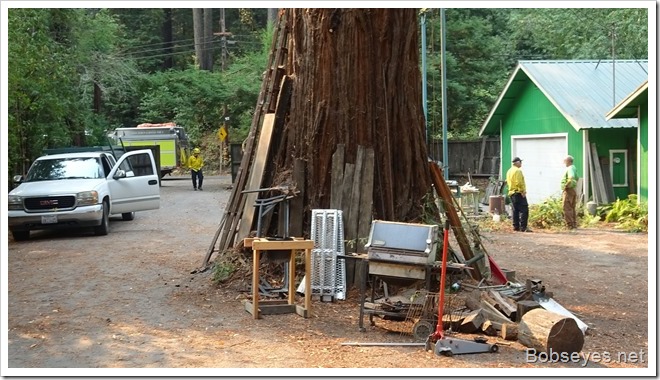 We showed them around to our neighbors place. 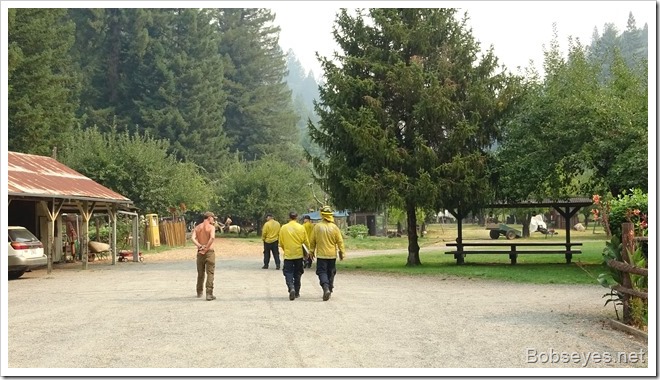 They where doing a pre-check so they had some idea what was going on if they had to come back in a hurry. Nice guys.

Then we went to work clearing stuff around our houses. I worked around my house then came over here to help  my bothers after I did the last update. All I had in me was to run the air blower to blow everything away from the house as much as possible. 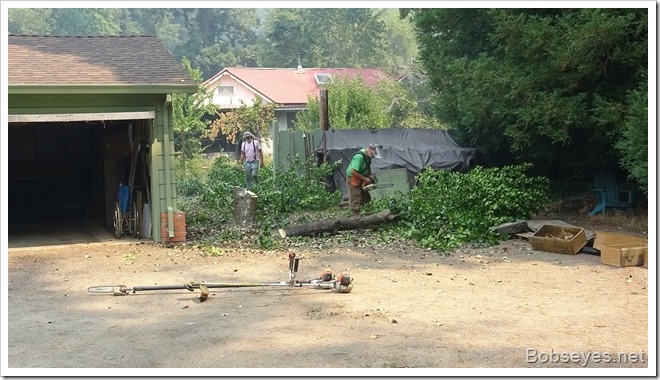 That about did us all in so that’s why I’m here  doing this as it’s all I can do for a bit.

The fire trucks moved on up the road towards the fire stopping at houses along the way. If the fire comes to a house they will try to protect it, then move down towards us as they go and the fire moves on.

I have my fire radio on and can hear the fire guys working up in the hills above me on it. Mount Jackson seems to be a hot spot they are trying to hold to keep it out of Rio Nido and Guerneville and beyond.

Things are still looking pretty good here, despite it all. :O)

Being down in the valley I’m not sure what’s going on up above the state park, but I know they are on it.  Hope to check that out soon.

That’s it for now.

(Visited 637 times, 1 visits today)
This entry was posted in Uncategorized. Bookmark the permalink.

12 Responses to Todays Forest Fire Update, Updated When I Can