So let’s start with yesterday or so. I woke in the morning  at 4AM with a head that I knew was altitude sickness from my Mt. Shasta climbing days. I thought I was ok, but soon got up and got dressed and decided not eating anything as I wasn’t feeling well.

That’s mostly the last I remember.

Marty says I was up at my van cussing cause things weren’t going right, then I came down and was walking in circles and not speaking with any logic.

I don’t remember the guys going through my pants looking for my van’s keys so Dennis could drive it down off the mountain, or much of anything after that. I do remember Marty asking where the keys were and I started out with an answer, but realized it was wrong, stopped and said wait a minute, it’s up here somewhere and couldn’t get to an answer.

I got into a bed in the back of Marty’s van and rode on down the hill dry barfing a lot going over lots of bumps.

They drove me down the hill to around 7,000 feet and I recovered a bit after a good nights sleep in an American Legion parking place by an unused railroad track. So I’m doing better today, but maybe a bit on the gitty side.

Off to Tin Cup Pass

I’ll just say from the start it’s been a thumbs up day. We passed by over a hundred people going different ways on the trail on different rigs. It’s Saturday. I’d say way more than half gave us a thumbs up for driving our old four wheel vans up this trail. :O)

Dennis and Cheryl’s son Ken met up to lead us for the day in the copper jeep. He lives in Colorado.

Here’s the gang as we left from Bruno Vista’s city park. I also refilled my water supply here before taking off. 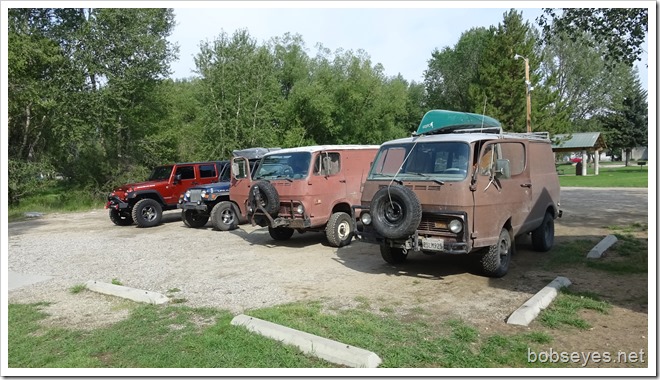 Headed into those mountains up ahead

Ken was leading out this highway to the notch in the mountain to start over Tin Cup Pass. 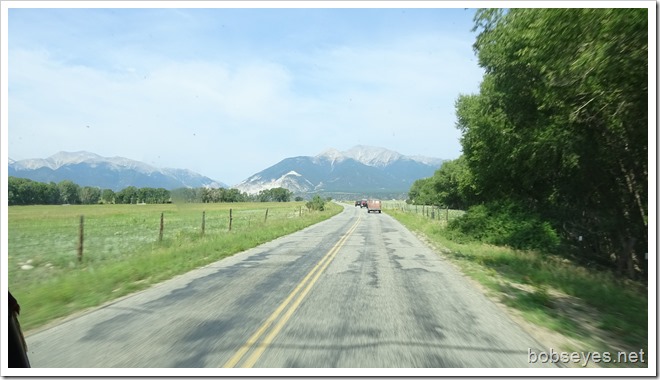 No idea what we were getting into

We had no idea what we were in for this day as we traveled up this road going into or onto the mountain range. We were following Ken and his parents up the hill. They said it would likely be the most four wheeling we’d do and so far they are right. 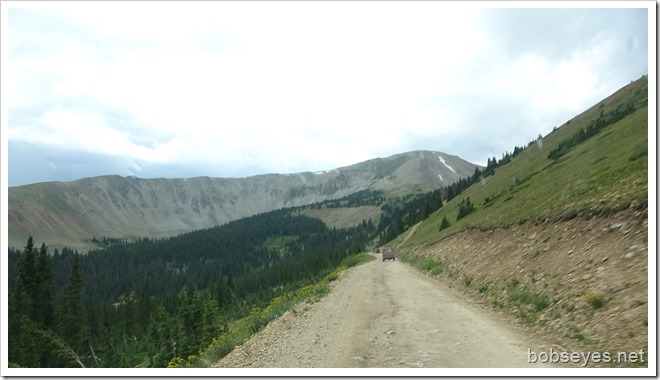 It was nice and gentle as we climbed into the mountain range. 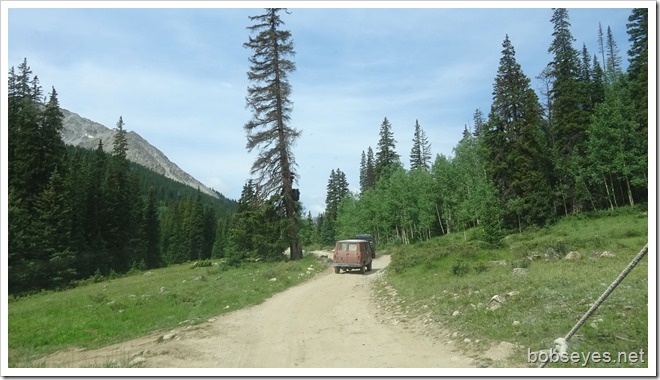 And things got a bit rougher for the next five hours of travel. I’m following Marty and Patti in their van ahead of me bouncing over the rocks while I’m trying to hold my camera. 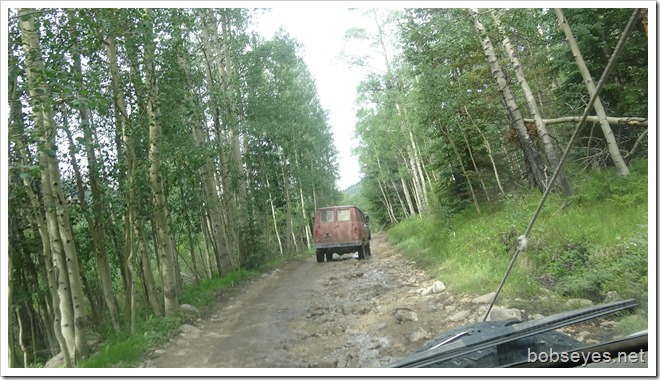 We continued on through different kinds of forests. 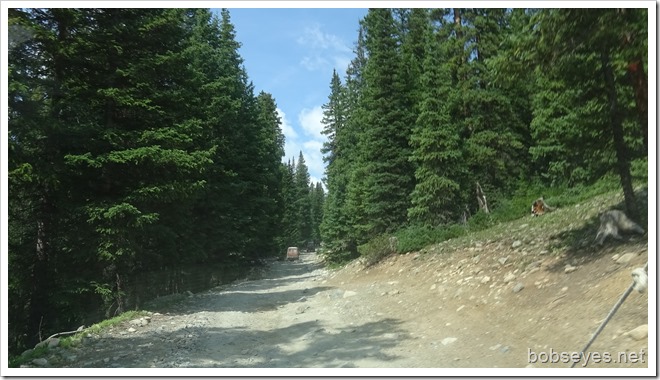 Some of it was flatter than others. 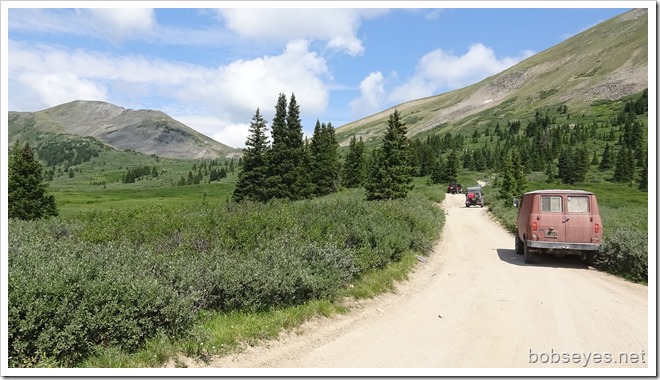 Here’s some of the ‘’others’’ as we neared the top. Lots of rocks! 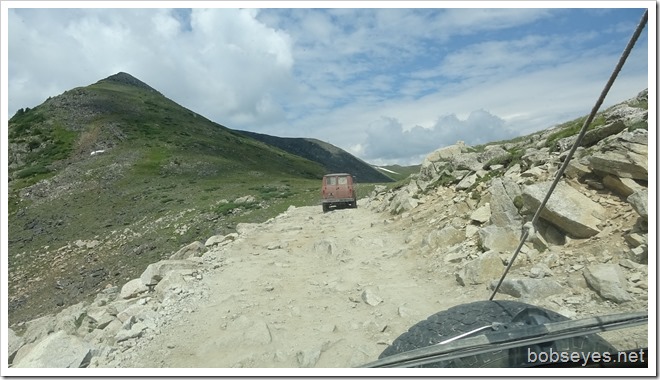 We’re on the Continental Divide

We make it to the Tin Cup Pass which is also the Continental Divide and take of bit of a break and just enjoy the views. Dennis and Cheryl’s jeep by the Divide sign. 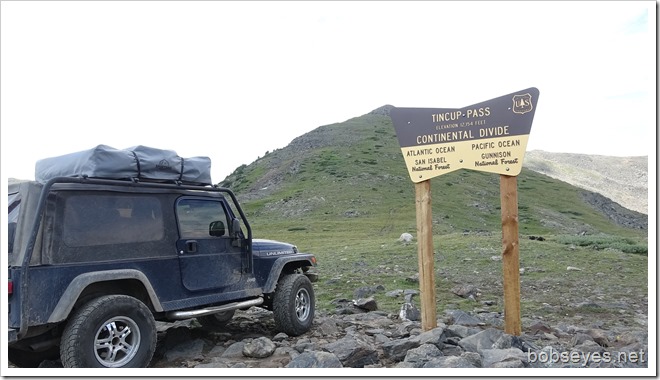 The vans made it up there too over all those rocks and there’s plenty more rocks for us to go over from this spot. We’re not even half way yet. 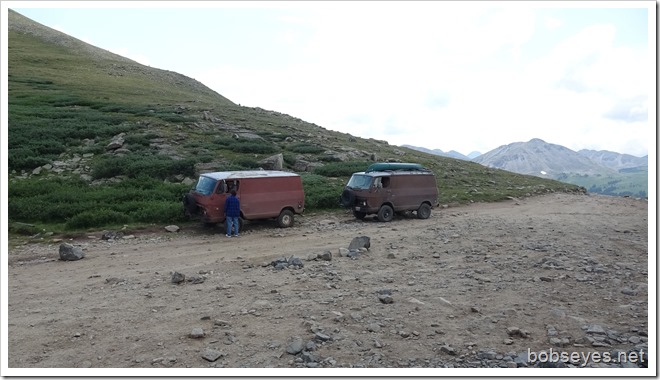 Rockier down the other side

We leave TinCup Pass and head down the other side for even a rockier ride down the hill, most of the time I can’t pick up a camera. I’m thinking I’m glad we didn’t have to come up this side as it was real rough and good to be going down instead of up. 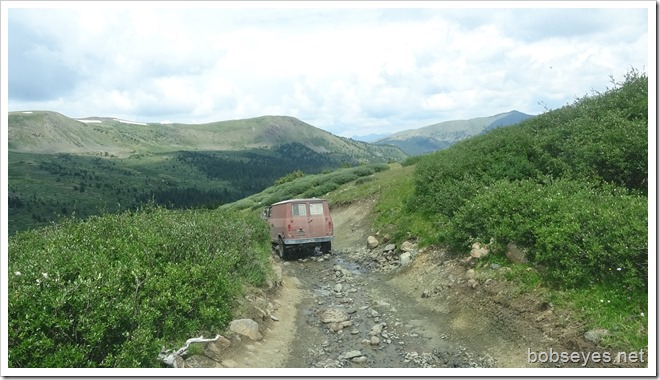 Bouncy bouncy most of the time

It was bouncy bounce most of the way down, but real nice country to go through. 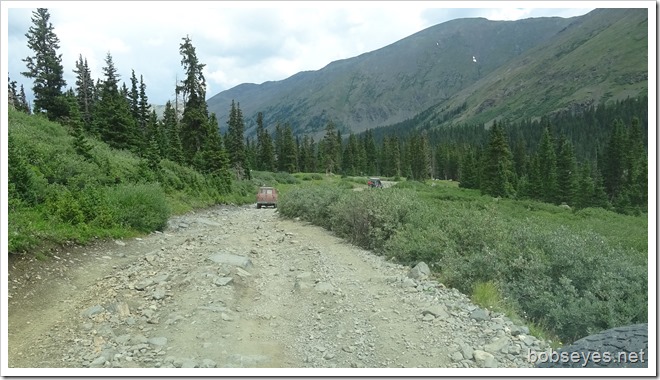 We stopped here for a bit of a rest break and a walk around after bouncing over all those rocks on the way down. 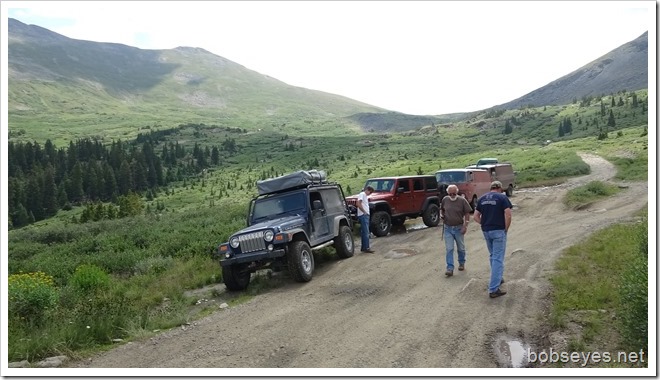 We traveled through this ghost town, but fairly new and not too ghostly and called TinCup. 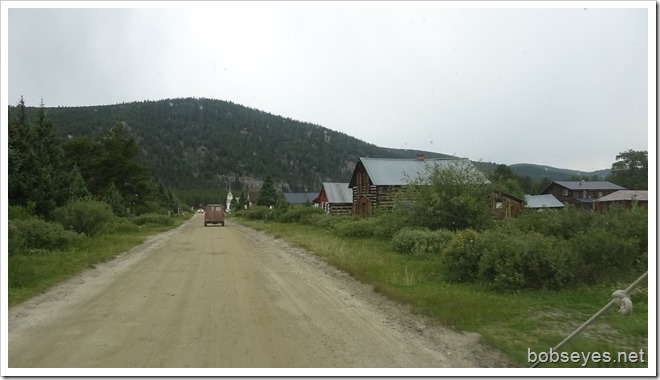 We continued on and headed down to this lake still bouncing along. 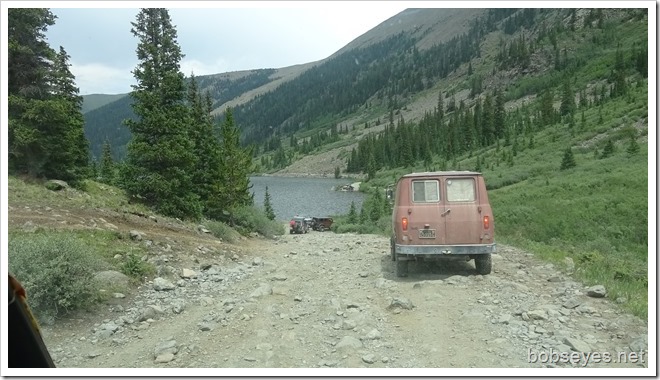 Here we are at another pass and it is cold and has been spitting rain most of the day. The views are great but it’s cold out. 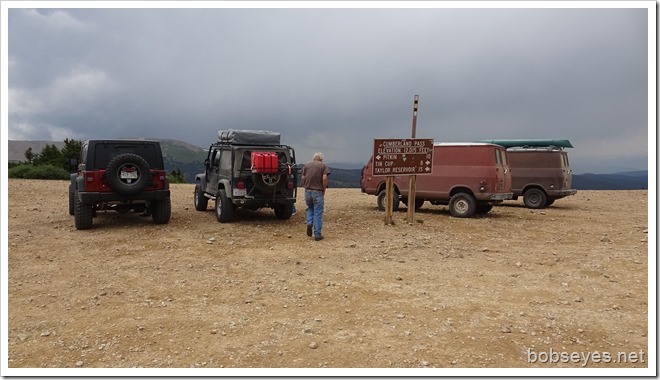 Once in awhile we’d get a good piece of road. 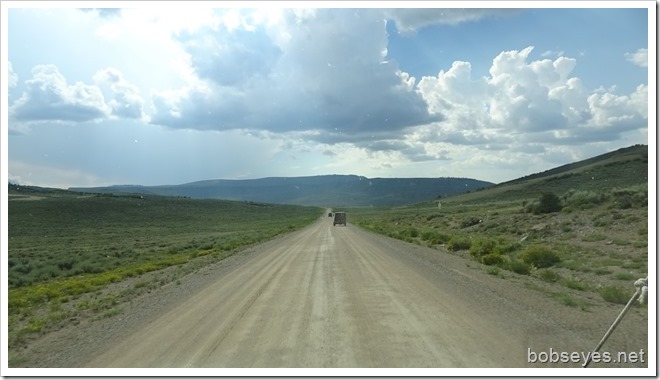 But most of the time it was rough and slow going. Low range low gear just to go slow enough not to destroy the old van hopping over the rocks. 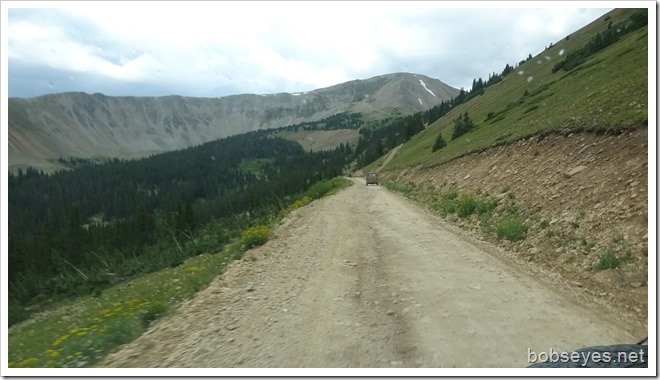 After we hit some highway, Ken leaves us headed to his home in Colorado and we are on our own again. Ken did a good job leading us along the trail today. Thanks Ken.

We found some BLM land after coming off the mountain and Marty found this camp spot for us for the night. 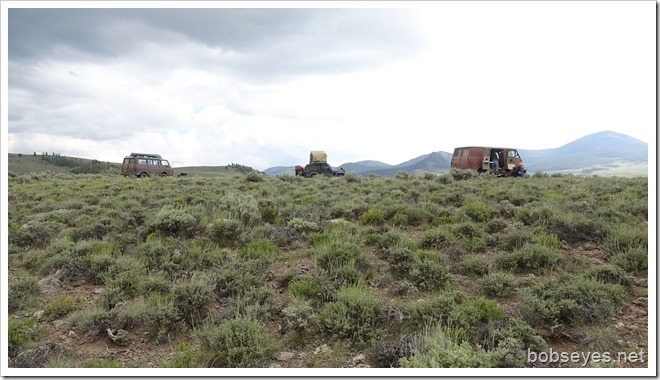 It started to rain here after we all ate and were sitting around shooting the days bull.

Here’s some of the sometimes heavy rain that was falling on us looking out the van’s side door. 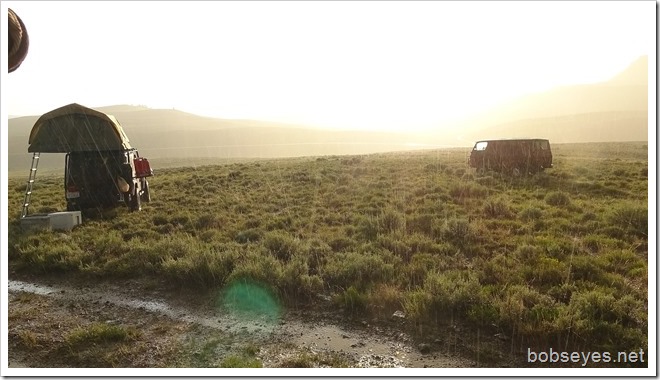 The rain and the wind has finally stopped around seven PM so things are looking good for the tent campers.

Well, that’s it for a great day on the Continental Divide climbing over TinCup Pass and more.

Tomorrow onward south and I post this from somewhere.

7:45 PM. The lightning and thunder storms have moved in around us with some more rain and a good deal of hail too. Interesting night so far. Hope it doesn’t snow. :O)

8:PM Lots more rain coming down around us, fairly heavy at times and some real close lightning strikes pretty close up the hill from us with lots of lot booms. Its fairly dark out already even though it’s only 8. I bet those guys in the tent on top of their jeep are having an interesting night out there. :O)

8:10PM. Things have all settled down for now, maybe for the night? Nice and peaceful out there now still spitting light rain a bit. Time will tell what the night brings.

Not long after I posted the above, the lightning started again with heavy rain. Some real close lightning hit not too far from us.

10PM All the rain sleet and lightning and thunder stopped at this time for a peaceful night.

This morning the clouds all cleared and the sun is out bright as we get ready for the day as things are drying out.

For another point of view: