The day was sunny and no wind again today. I needed to transplant some rooted  table grape canes I put in the ground last year to start some roots on them. I acquired them from a friend who got them from a friend in Healdsburg. They are some real nice table grapes. Some are big black seedless grapes and I can’t remember what some of the others are, but they are all real good type eating grapes.

I had pushed a cane in the ground here, but noticed it was too close to the water faucet. As it grows it would crowd out the faucet if I didn’t ‘move it, so that is where I started today.

It’s a bit hard to see as it’s fairly small yet, but it is in the bottom center of this picture. 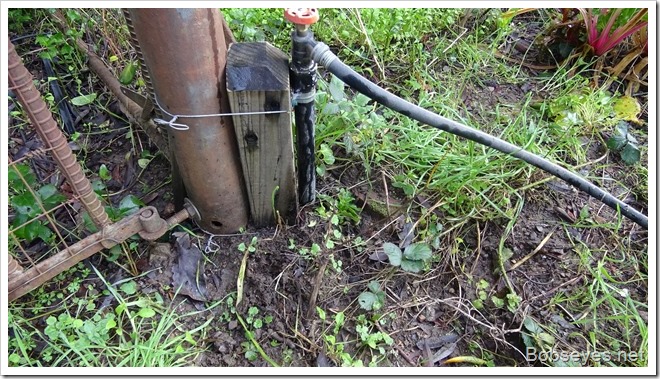 I dug it up and moved it a bit further away from the faucet and put a bigger stick by it so I’d remember it’s there and not mow over it before it got a chance to grow bigger. I think the gate will just clear it. 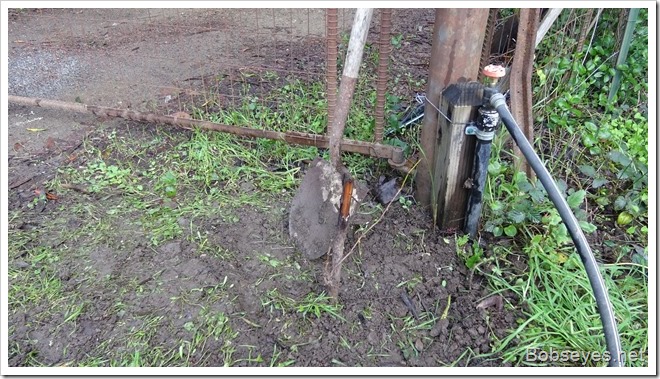 After I got that done I was thinking I should of planted it somewhere else and maybe I will eventually.

Digging canes in the potato patch

Next I went over to the potato patch as I had pushed some grape canes in the ground in this spot last year and they were doing real well.

There’s one of them between the shovel and the log. 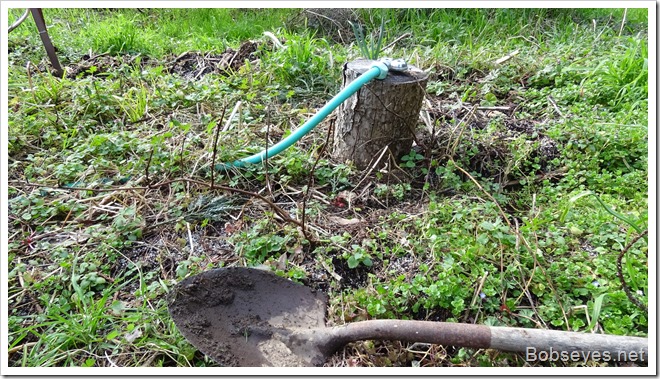 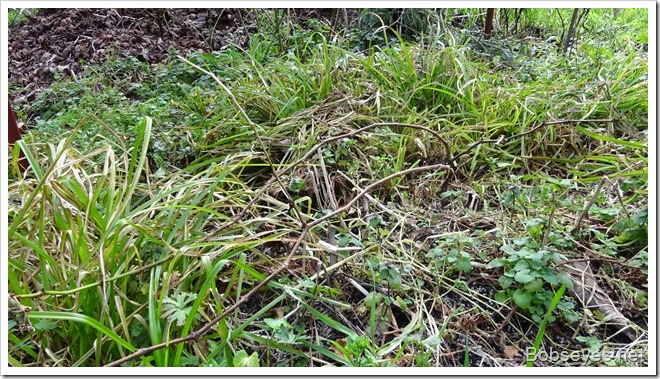 Dug all this up to get the rooted canes out

I dug up five of them and had to move some dirt to get them. After the hard work was done the cat came over to check things out. 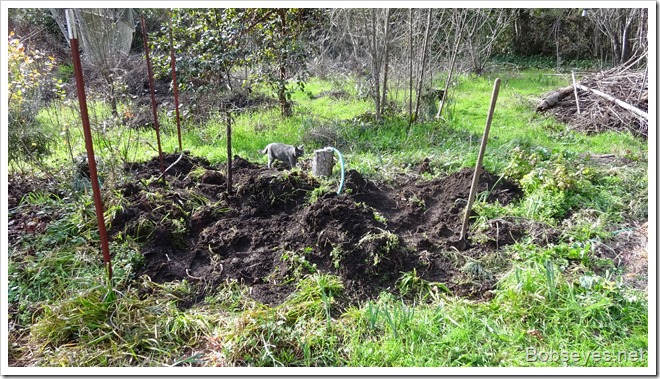 I always have a chair close by as I need it to rest a lot these days as I don’t have the energy I used to have. I used to be able to do this kind of stuff all day without any problem. 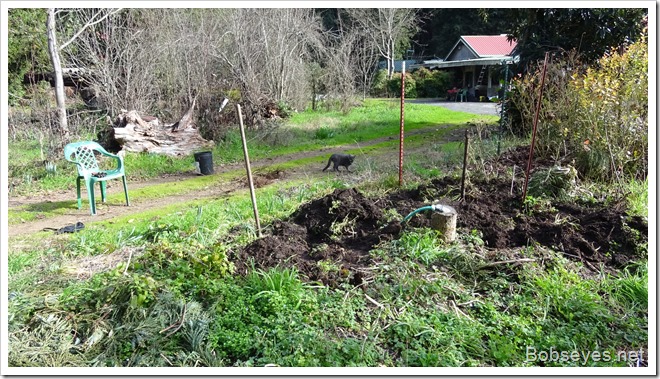 Here’s the five grape canes I dug up. I need to trim them up and then plant them in a new spot. Of course when one is digging in a potato patch one digs up potatoes, about a third of a bucket of them. 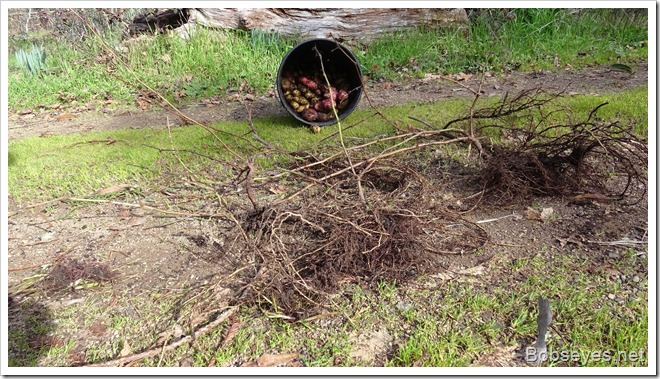 I planted four of the rooted canes along these steel posts. 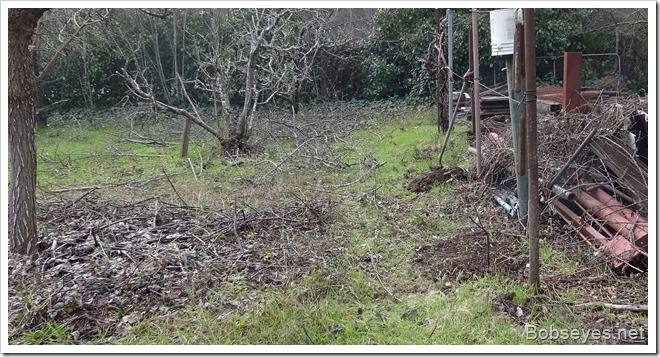 I have good soil, but there is a layer of rock under the old driveway along this spot, but once I dug through that layer the digging gets easier. 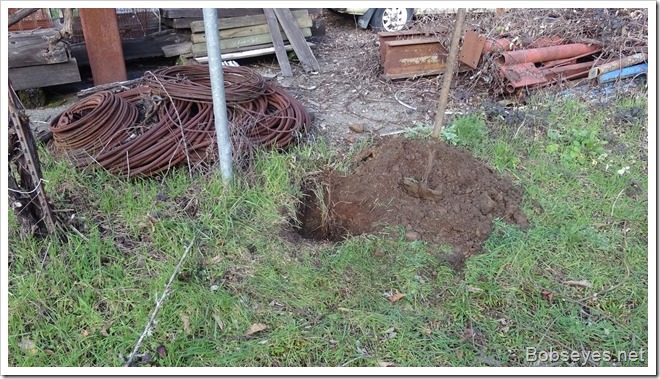 Here I’m putting the dirt around the rooted grape cane. 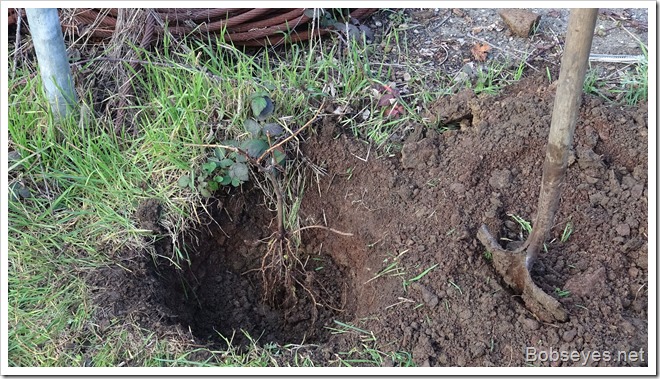 I put sticks next to them to mark where they were.

I put the fifth one in another spot that was easier to dig, no rock layer which was good as I was worn out by now.

The cat watches as I work away. 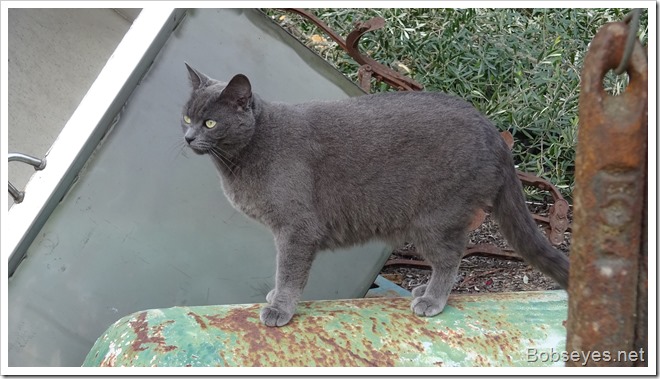 Spring is coming soon as I was surprised to see this pink rose getting it’s bugs already that’s why I’m getting the rooted grape canes transplanted. 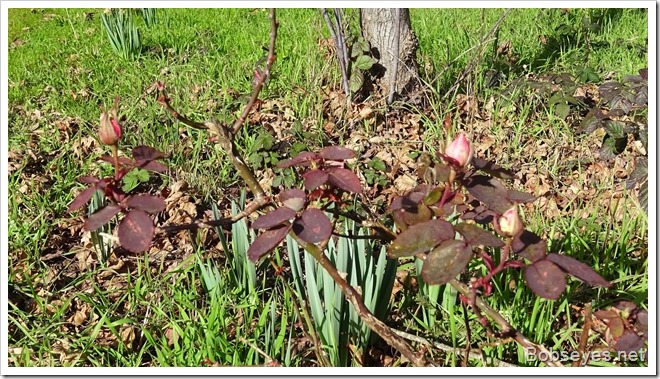 Since I dug up those potatoes, I needed to clean them up so I did that after a break and then went on in the house for a rest as by now the day was almost over and it was getting cool outside.

Good to get those rooted grape canes transplanted today.