I heard Barry out in the front  yard with his dirt bike around 11, so I got it going and joined him. My other brother Tom joined us for the first time. He’s usually too busy working in his gardens for the farmer’s markets.

Tom takes off and then Barry takes off. Barry leads most of the time as he’s the fastest speed demon and I follow. Tom followed me as he doesn’t ride as much. 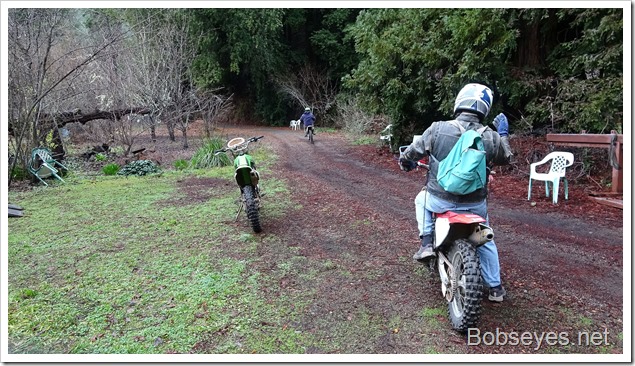 Barry says it’s supposed to start raining around 2, so we better get going.

Headed for the waterfall

They wanted to check out the waterfall, so we headed on up that trail to the parking and turn around spot, here. 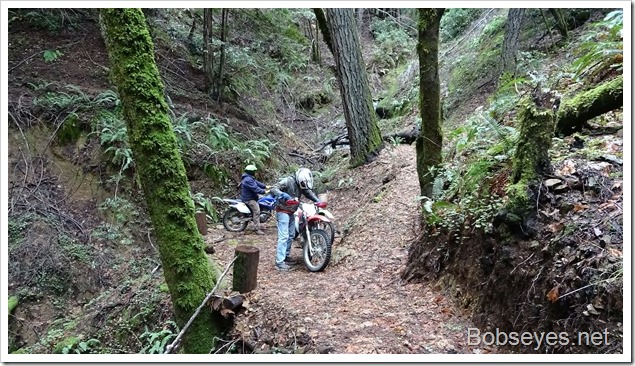 It was larger when it was raining yesterday, but still very nice. Barry gets a picture. He must of thought it was nice as he almost never takes a picture of anything. 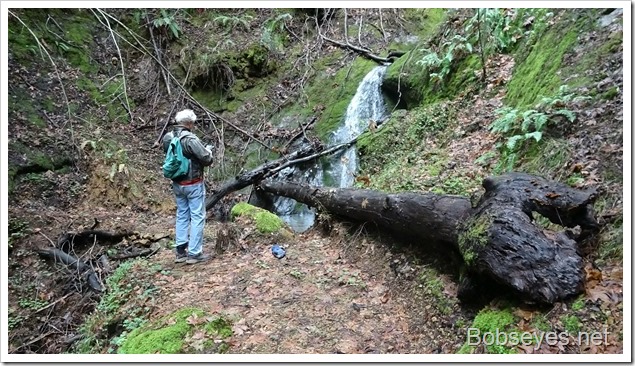 Barry and Tom are admiring the waterfall and it’s surroundings. 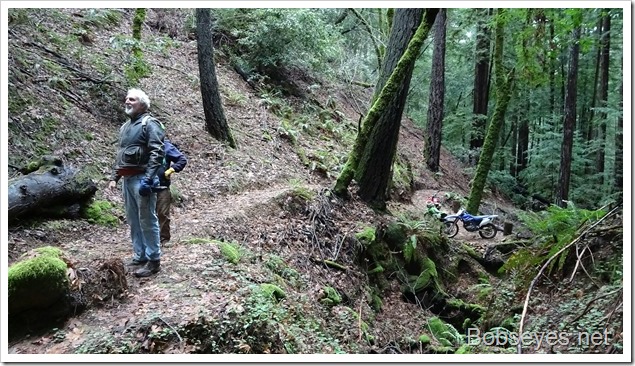 Barry had three bottles of his home made wine he wanted to take up to my Cousin’s and give it to them. They live on the hilltops.

We had a nice chat with them and are taking off to continue our ride. 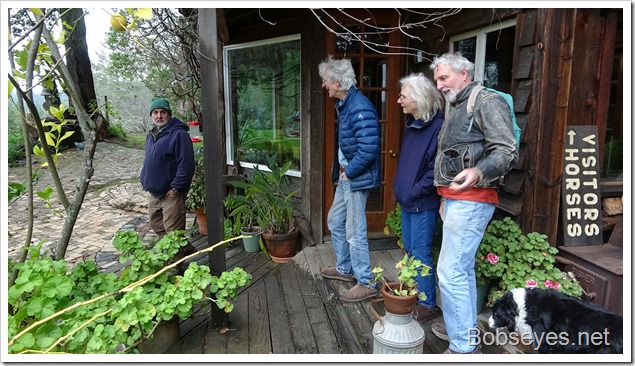 From there we rode on up to the Top of the World to check out the view.,,,,But. 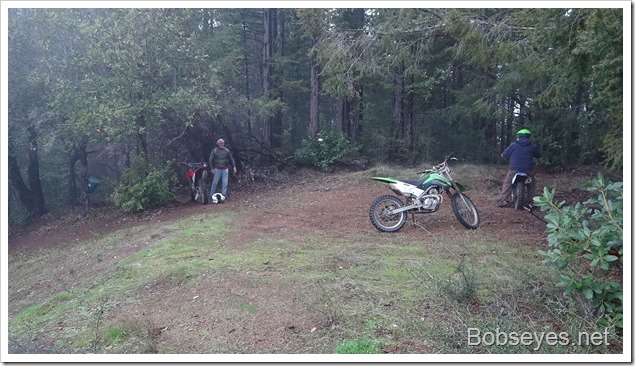 The view is of a fogged in forest. The fog  is from the damp forest as it rained last night. 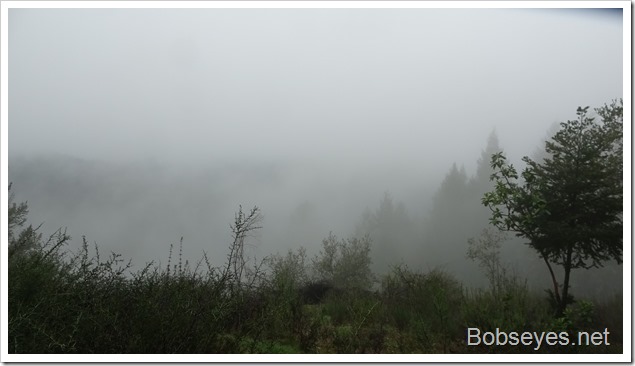 We rode on down to a lower spot, the Guerneville overlook and it wasn’t so foggy. They might be in for some flooding soon. Thank you great grandfather for not building in the flood zone. I live in his old house. :O) 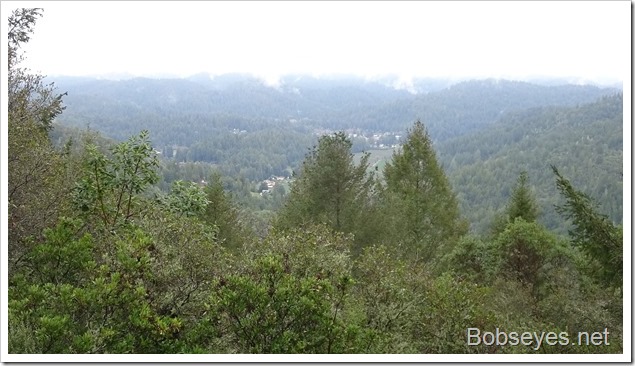 We rode around a lot as the ground was just right for riding. We got home a bit before two when the rain was supposed to start, but there were just some sprinkles.

The internet repair guy was due around 2, so I waited for him. My brother’s cable guy showed up which was good. I can get his cable internet when I need it at my house. The phone company didn’t show up as I thought they were supposed to, today.

I was doing some chair hopping when I decided to do a severe prune job on this pineapple guava bush to hopefully get larger fruit next year as this year they were really small, even though there were lots of them. 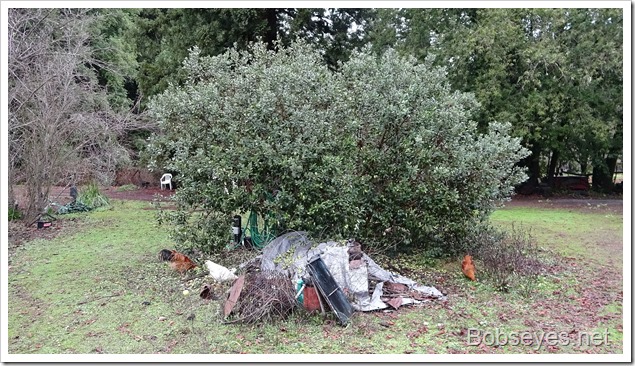 I was pruning away at that bush when I heard a repair rig next door at my brother Tom’s place so I went over to fill the repair guy in on what happened to break the wire to my brother’s house. A big redwood tree fell on it and broke it in two.

The repair guy had to go way up on his ladder, further than I’d want to go. 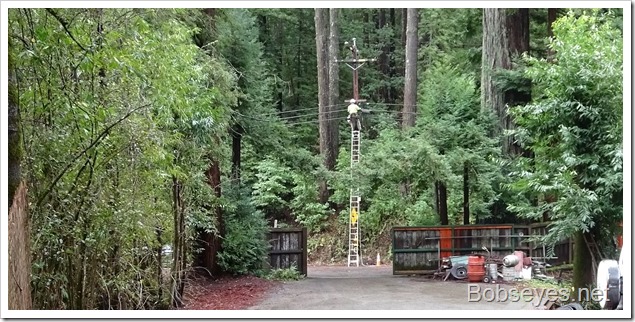 The wire broke off at the box when the redwood limb hit it so it was a fairly easy repair. 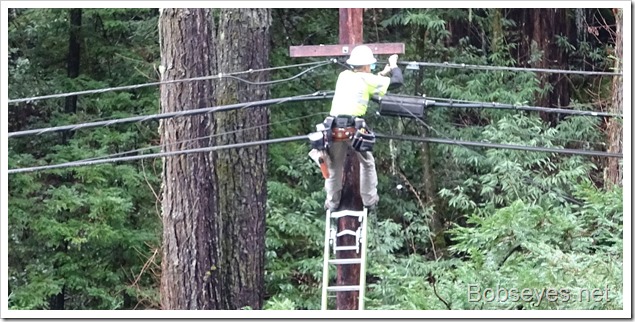 He got that all fixed up so now we had internet again. I’m still waiting on the phone guy to come, maybe tomorrow.

I went back in my yard and finished pruning the pineapple guava bush to thin it out. I think I thinned it out good. I was going to pickup the brush another day as it was almost dark. 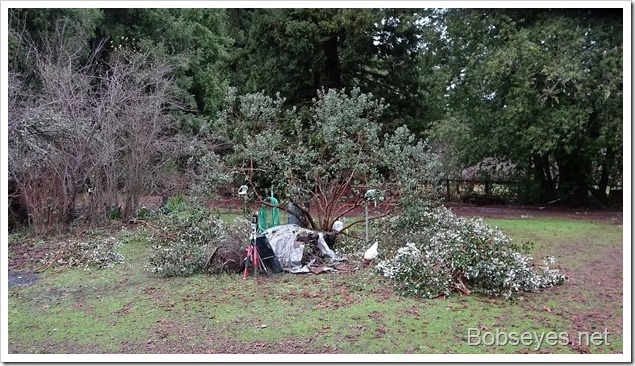 I did a bit of chair hopping and darned if that brush didn’t call me to pick at least some of it up. I hauled it a short distance to the habitat pile to decay into mulch. 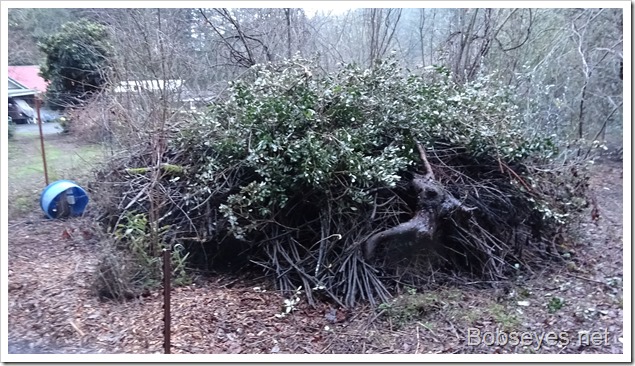 I got a little over half cleaned up and my back said to quit. 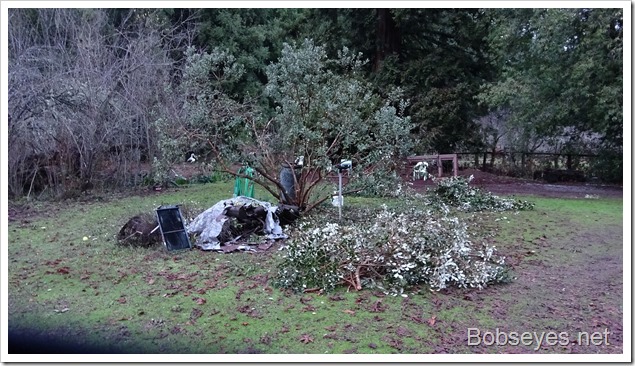 On rain, I hear we are in for some good storms. This year’s rains reminds me of the heavy rains we had in the 1950’s around here. You have to be older to know that.  Bring them on.