The Way Noisy Roosters Are Silenced

It’s interesting that when the new roosters get old enough they start to crow a lot which is ok in the day but they do it at night too. Now one rooster at night isn’t too bad but get a few more and they work off each other and the neighbors might not like it after a few days and neither do I.

Saved one for insurance

It’s actually a good thing as it means I need to butcher them. Doing so also removes them from the flock and the flock seems to settle down without them. This time I decided to keep one of the young ones that looks the most like Carmelo my main rooster. That’s sorta like insurance as if something goes wrong with Carmelo I’d have no way for some time to hatch out some chicks and I’d have to buy some.

So last night I put the six birds I’d picked out in a separate pen for the night as it’s much easier to catch them at night when they roost. I did find out later I messed up and thought one of the hens was a rooster. But it’s ok as I need to eat and eventually they all will go the same way. It’s just the way it is if I want to eat.

So this morning I fed the chickens and then put the roosters in a small cage to transfer them to the butcher area where they’d wait until I get in the mood which usually takes awhile. 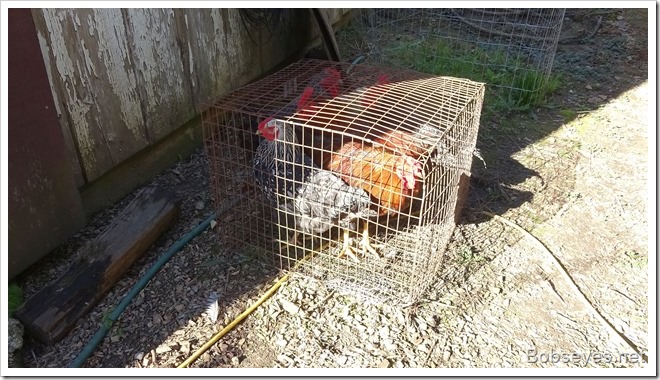 So I spent a good deal of the day puttering around the yard and chair hopping and mostly just enjoying myself thinking about stuff.

The clock keep moving on and eventually I had to act and do the job which really isn’t too bad as I have all the tools to do the job easier.

Here’s my work area with all the tools in place. The wind was blowing so I set up some wind breaks for the dipping water pot. 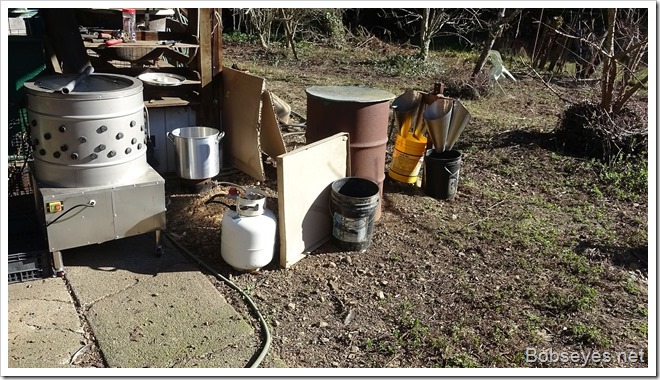 I do three birds at a time and I’m improving on how it’s done and my speed per chicken has improved a lot too. This all makes the job easier.

After getting the birds done, washed and bagged I hauled the remains to the blueberry patch and buried them around a blueberry bush just about dark.

That was my day. I now have a freezer full of chickens to eat. Yummy, I need to get one cooking right after this post, which is now.

Nice day doing what I have to do.