Yesterday I posted a blog on How I do my elimination diet. A lot of why I did that is for those I talk to that want to do the diet and didn’t take notes as there’s a lot of stuff there and most would not remember it all, eh Ken? So now they don’t need to take notes. I’ve been wanting to write something up on it and have been thinking how to put it together and yesterday I was able to do that. I’m sure I’ve missed some stuff so I’ll likely be adding to it eventually.

Paddling to Casini’s and back

Anyway, today I decided to kayak below Monte Rio, maybe going down to the Casini Ranch and back.

I put in at the Monte Rio boat ramp where Bill was fishing from his chair so I shot the bull with him a bit before heading down river.

Here’s Bill sitting on the bank in his chair fishing. 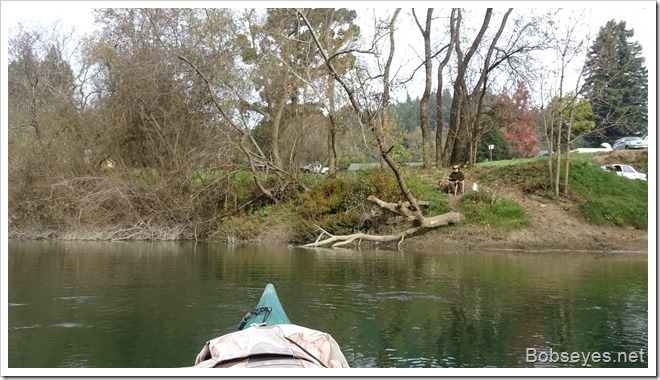 I headed down river going by this great blue heron fishing. 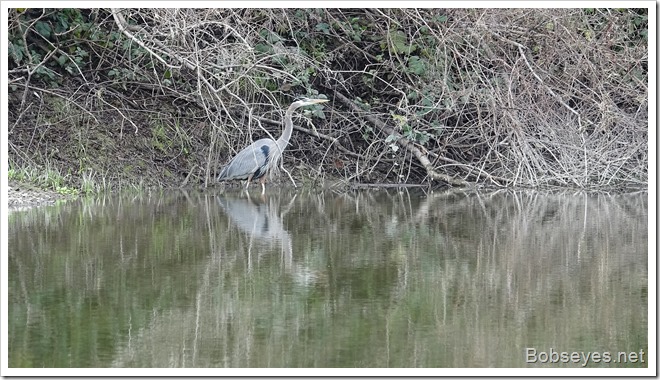 I spied something up in the trees just above the water and when I checked it out, it turned out to be this gray squirrel, I think it was coming down to the river for a drink. 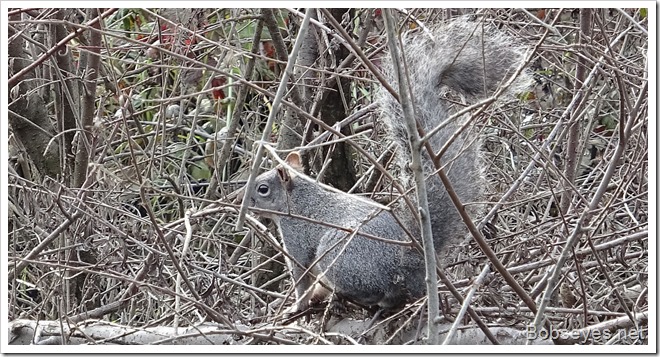 The wind was down and the river was flat today. I like it because with the flat water if anything moves on the surface, even a bug it makes a wake and attracts my attention. I’m headed for Villa Grande down as far as you can see. 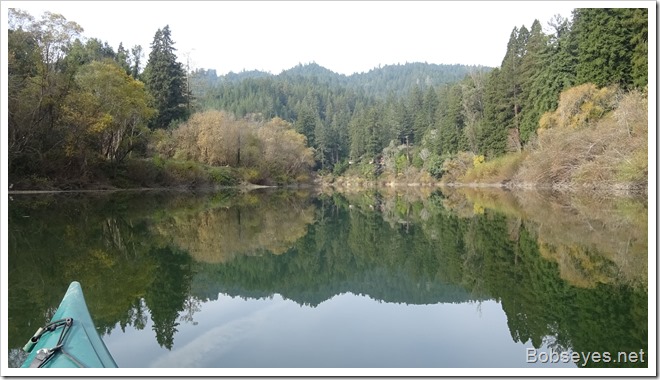 I saw some big bird up in an osprey nest at Villa Grande. Getting closer I discovered it was a turkey vulture getting some sun. 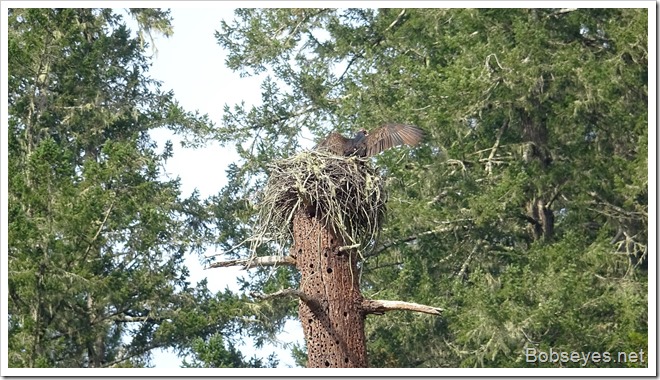 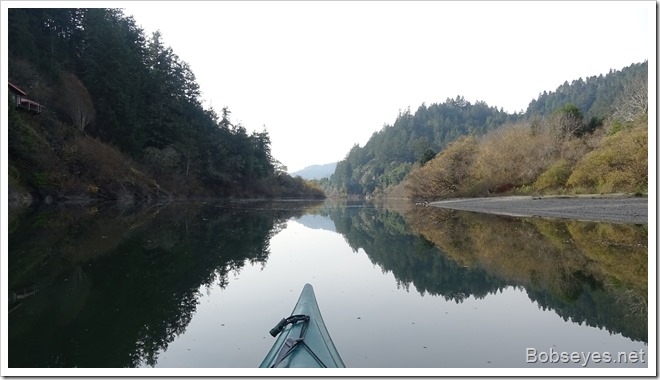 Some merganser ducks. The black headed ones are males that come back from somewhere to join up with the females to mate. They hang around until nesting when they seem to disappear leaving the female to take care of all the young’s activities. 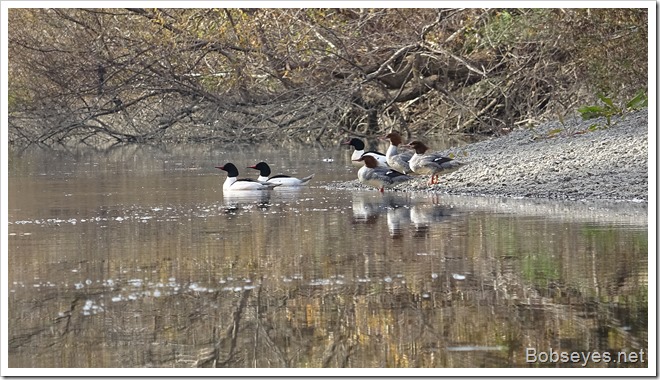 I usually pull in by this rock cliff to take a break out of the wind, but today most of the river was out of the wind so there was no need to pull into my spots. 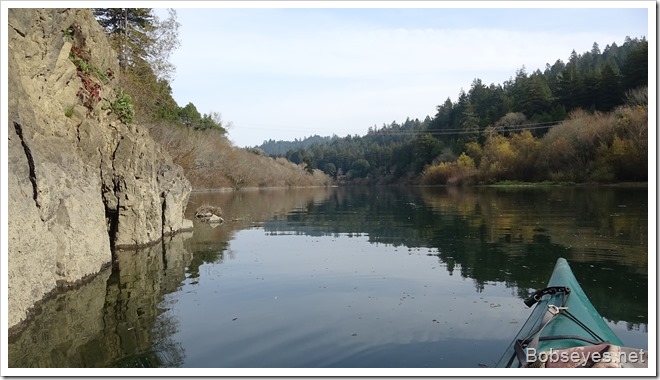 Some splashing down river

As I was paddling down river just above Moscow hole, I saw a lot of splashing going on down river. I wasn’t sure what it was, I thought it might be a seal with a big fish as there was a seagull there. But the other ducks where mergansers that I think were just fishing as they put their heads just under the water surface and zoom around chasing fish. 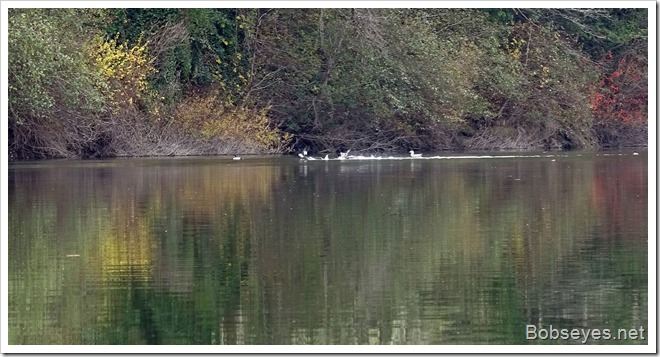 I pulled into the Moscow hole by Rein’s beach and rested for a bit. 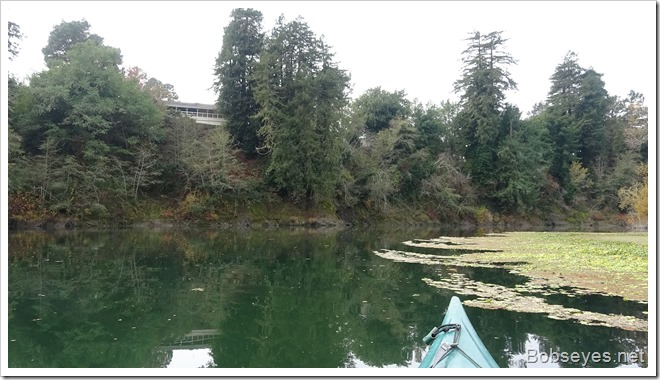 Just down river from that spot I was paddling along and going around a little island when I remembered there are usually some black crowned herons there, so I turned back and entered the little channel where two of the birds flew from the trees right away and landed close by.

Here’s one of the birds. 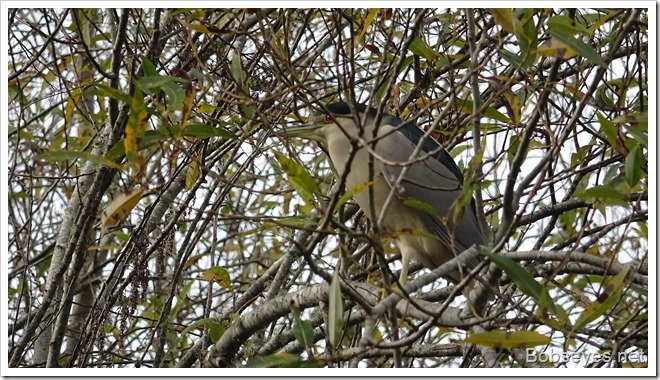 I was just above Casini’s Ranch so continued on. Here I am at the Casini Ranch riffle. I stopped and watched for big fish in this area for a bit but saw nothing and this was as far down the river as I went today. 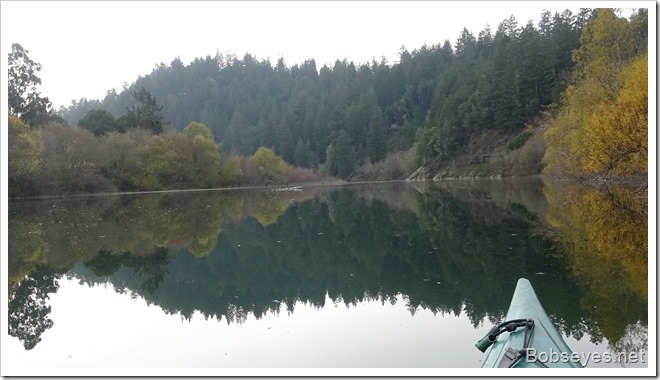 As I was sitting there resting two guys in kayaks and fishing paddle up from down river. I shot the bull with them for a bit. They hadn’t had any success with fish, not even any bites. They took off up river and I soon followed. 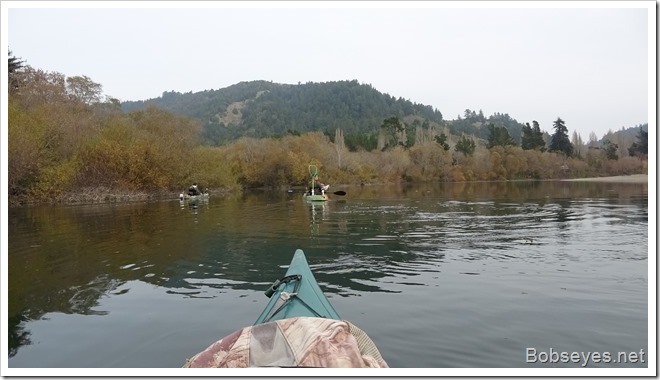 I saw one of these green herons fly into the trees by the river so went over to try and get some pictures, but the bird kept moving back into the brush so I wasn’t getting good photos when this other one flew in right beside me with a squawk. 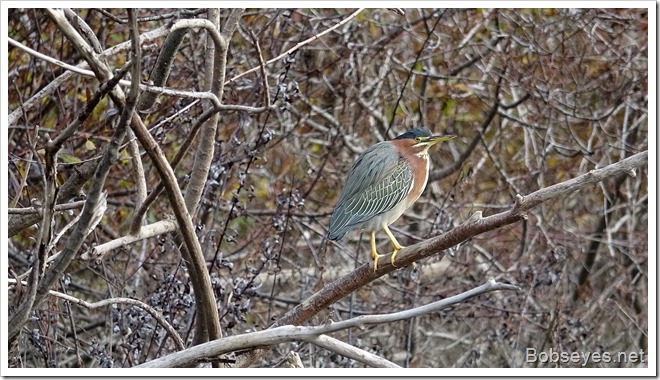 I continued on up the river and went by another grey squirrel hunting around for something to eat in the brush. 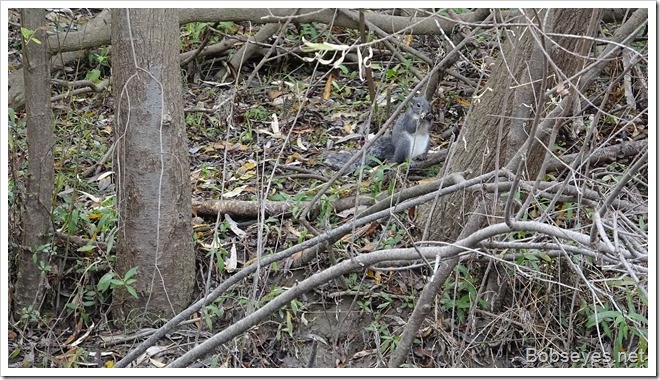 Patience at the boat ramp

When I got back to the Monte Rio boat ramp it was all plugged up so I found a spot to sit across the river from it to wait for the ramp to clear. The guys in the green kayaks took a long time to load up, but I kept my cool. I don’t know why people think they need to lollygag around on the boat ramp for so long so no one else can use it until they move. The drift boats loaded up fairly fast compared to the kayaks. 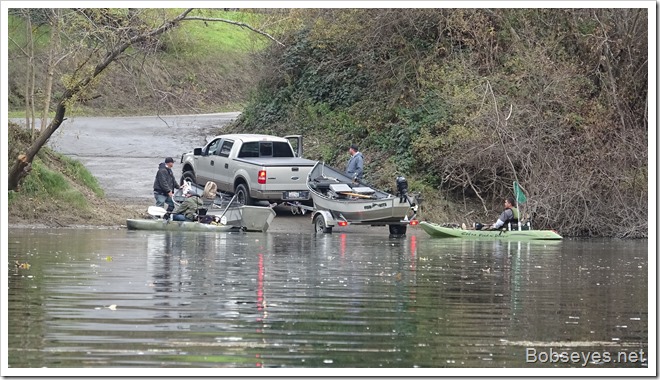 I loaded my boat and drove on home. The sun was already behind the mountains to the west of my house so it was already a bit cool so I didn’t even try to get anything done and just came in the house to warm up.

And that was my day for a nice one paddling below Monte Rio on flat water.