The Old Stump and the Muddy Chicken Pen

I’d planned to go do some visiting today but after feeding the chickens I was sitting outside with an overcast sky when the sun popped out.

It was so nice out I decided to maybe go visiting later in the day.

So after doing some chair hopping I decided to see what I could do to remove the piece of old redwood stump that recently fell off and was hanging over the creek ready to cause some washout problems when the creek came up high.

Just a little history on that stump. The original redwood tree was cut down by one of my uncles in the late 1950’s when I was a kid living here. It was too close to the creek and they feared it  might fall down on a house. The stump on the left of that big tree is from the original tree. 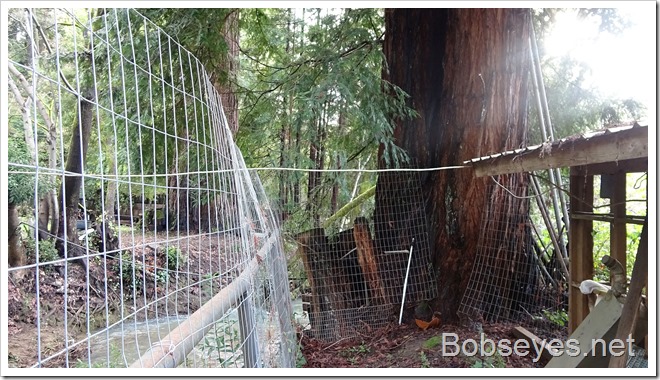 It’s hard to kill a redwood tree so it shot up a new tree just to the right of the stump which was a little better as it was further from the creek and it’s grown this much since then.

Well, that old stump finally rotted enough to break apart and that’s what I’m dealing with.

I was able to take down some of the fence to get down to the stump. 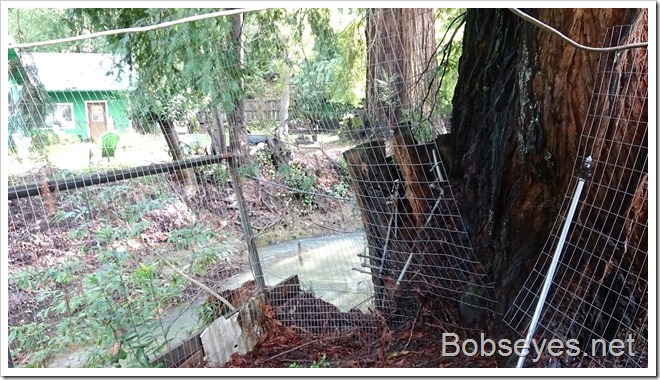 This is the piece of the stump that broke off. It’s pretty well balanced there and just about ready to fall into the creek. Somehow I needed to help it along. I couldn’t do much from up here so I had to jump down to the right of it being  careful it didn’t fall on me. 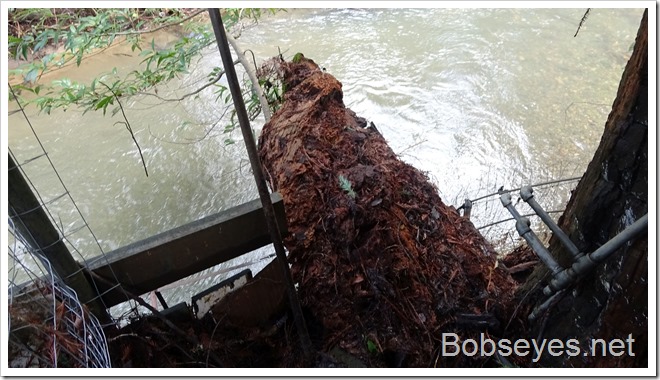 Terry in comments suggested a chainsaw and I was thinking of using it but this was in a perilous spot to saw. 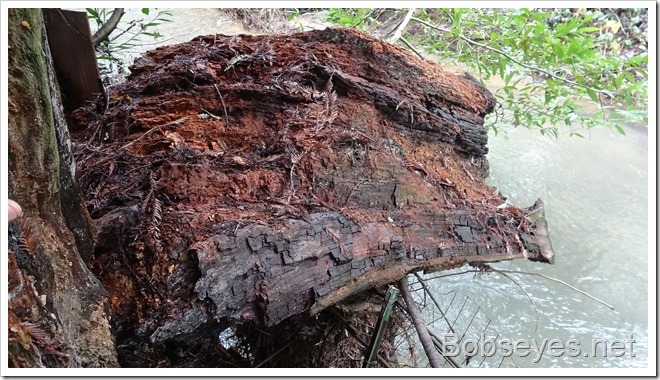 I wiggled it a little and it fell down like this for a bit then the water took it away, but not far. I also have to get that little green tree cut off as it can cause the same kind of washout problem as the stump. 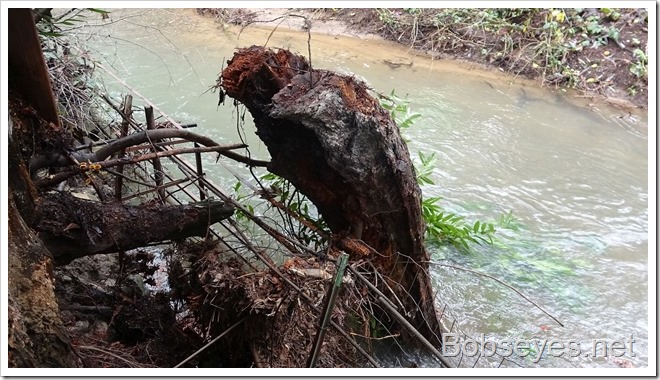 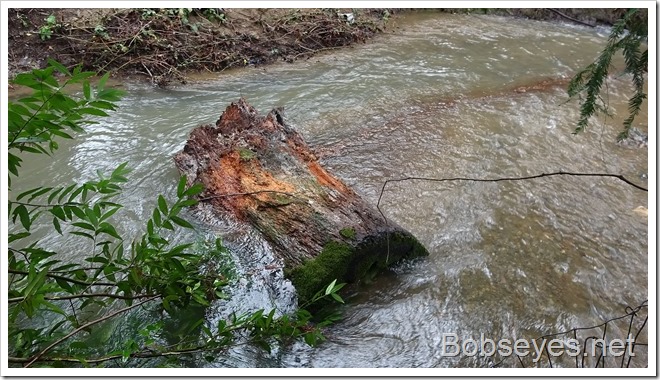 I got a little hand saw and cut this little tree hanging over off. 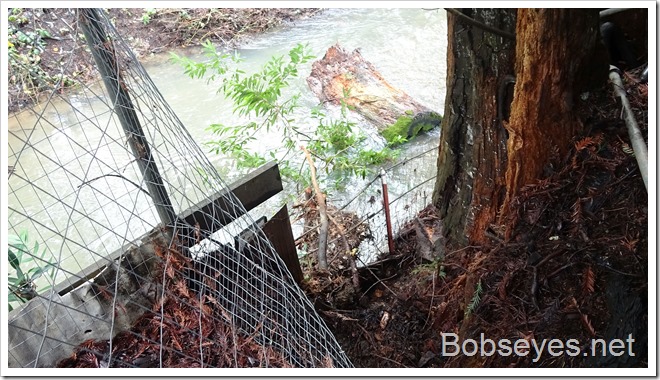 OK, that’s better, now I just need to go down into the creek and get this stuff out of it and to shore which I did with a rope as the water mostly wanted to take it down stream which helped me get it out. 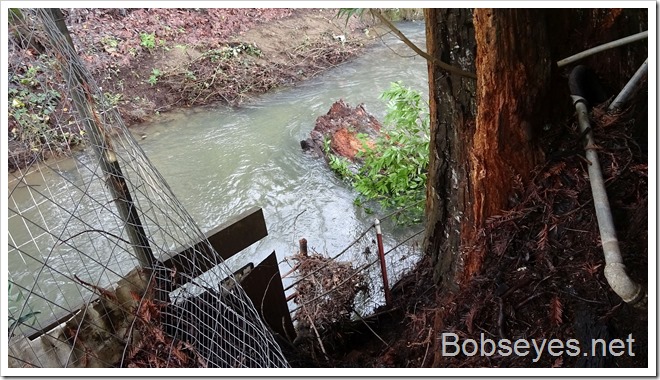 The fence got closed back up and I had a good break doing some chair hopping in the sun around the yard.

I noticed the daffodils are coming up. When they bloom it means Spring is here and it doesn’t look like it will be long before they do. 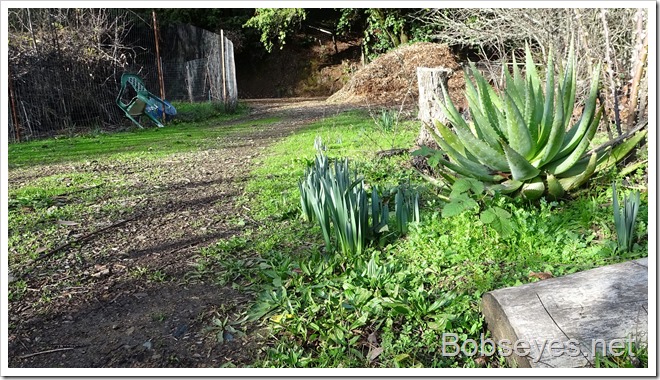 Later in the day I realized there were a bunch of people out and about so I canceled the visiting and continued puttering around the yard, mostly enjoying the day.

Late in the day I got the wheelbarrow out and a flat shovel to shovel some of the mud off the chickens had spread around the chicken’s pens. When it rains it gets real muddy which is hard on my slippers.

I cleaned up this section. 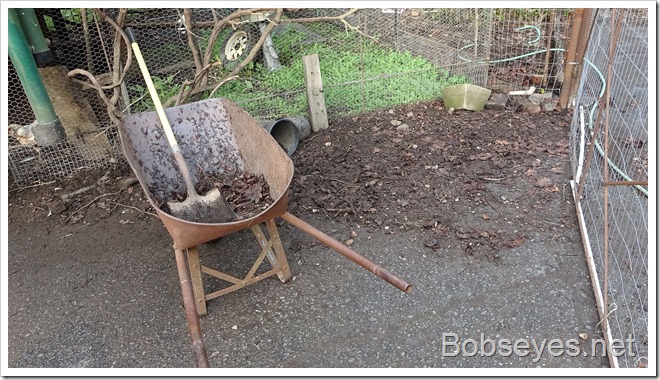 And the chickens helped too. 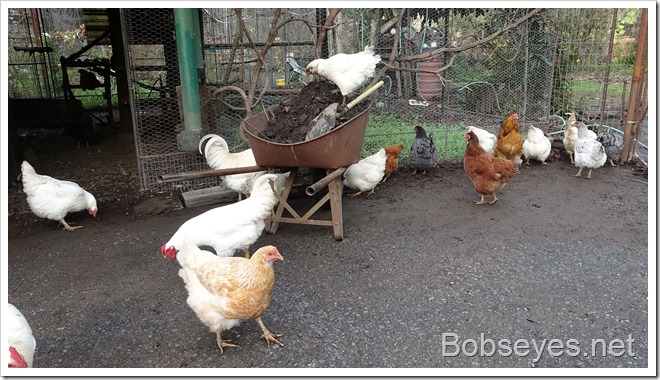 Then I started working on this part with the shovel. 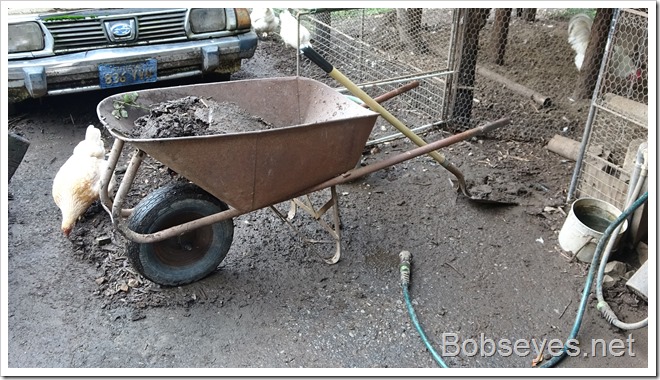 My plan was to shovel the dirt off and then use the hose to wash it down some.

The shoveling went well and I hauled a total of three loads of dirt out. 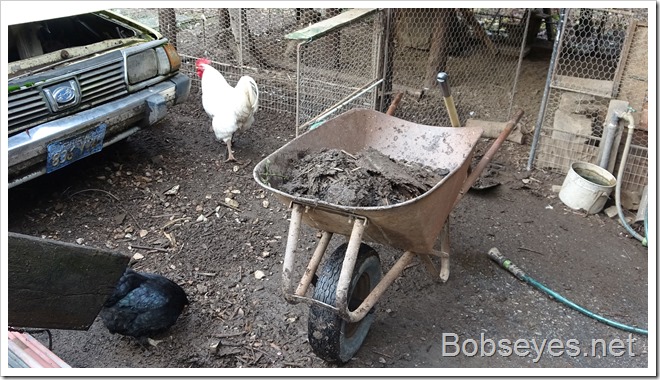 I set m camera on top of some buckets and started to wash things down when I yanked the hose which hit the bucket with my camera on it and my camera fell into the wet muddy dirt I was hosing.

I quickly grabbed the camera as water flows quickly and can do a lot of damage quick.

I looked through the view finder and this is what I saw. Not good, I thought so I took the camera in the house to dry out. 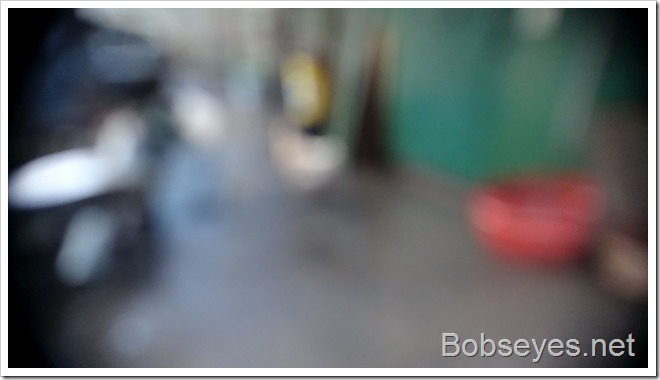 Later when I tried the camera I realized that blur was just a fogged up lens from all the dampness and the camera seemed to be OK.

1 Response to The Old Stump and the Muddy Chicken Pen