Time to get the car’s muffler installed

This looked like the day to get the car’s muffler replaced. I got the tools out I thought I’d need and set up the job. it turned out I needed a lot more tools than that, but that’s pretty  much the way it always goes. 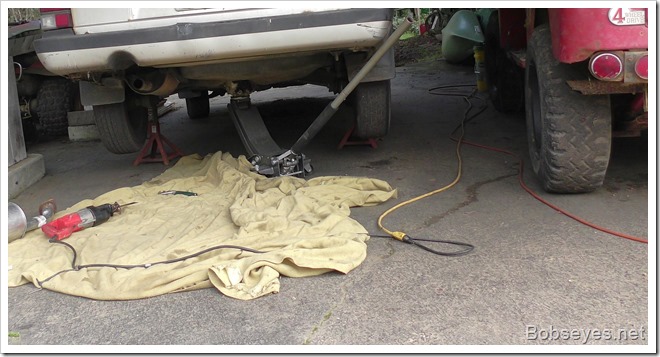 Working on the two rusted bolts

I’d hoped to be able to use the saws all to cut the two rusted bolts off so I could take the old muffler off. The two bolts were rusted pretty bad as the car was once owned by someone up in Alaska where they use salt on the roads a lot so the hex heads on the bolts were not hex anymore and none of my sockets would fit it very well. I was hoping to get sockets on the bolts and turn them until they broke off but that didn’t happen.

Giving up on the saws all

Well the saw’s all wasn’t working out s there wasn’t much room to work it under the car.

The old muffler came out easily but the rusted off flange didn’t come off easy. It came off hard as it turned out.

That flange has to come off

Here’s the two bolts I needed to remove somehow so I could get the old pipe flange off so I could install the new muffler. 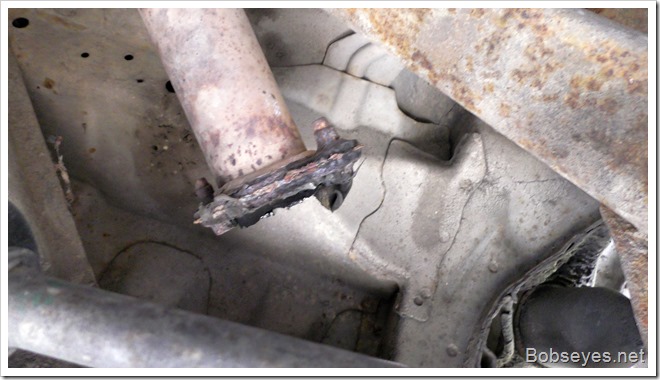 And the flange comes off hard

I tried several things to get the bolts off but nothing was working until I got out the disc grinder and ground the bolts off. It turned out that the two nuts were welled on under that rust so I had to grind the bolt off on both sides. There was so much rust on the bolts that it was holding things together just like the weld.

While I was working on that  one of my chickens got out of the yard pen somehow,  maybe through a cat door as she is a littler one.

This is Doris who acts a bit dumb sometimes but she’s smart enough to get out so who’s the dumb one. She’s supposed to lay green to blue eggs but she hasn’t given me any eggs yet as she is young but she should start to produce soon. 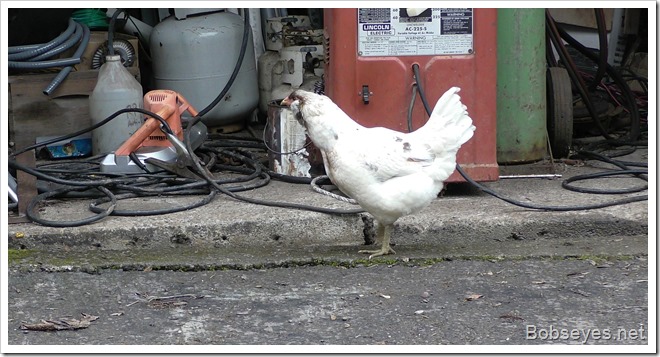 Doris wasn’t going to hurt much and she was more trouble to get back in the pen than it was worth so I left her out as I knew she’d come back in at roost time just before dark.

My work area got a bit messy as I tried different stuff to get the bolts off. 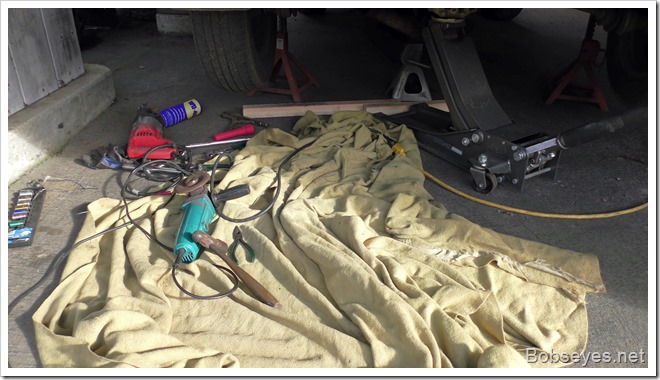 I ground on the bolts then hit them with a hammer until all the rust broke off and then found some bolts that would fit in my bolts can.

Tada, the bolts are off. 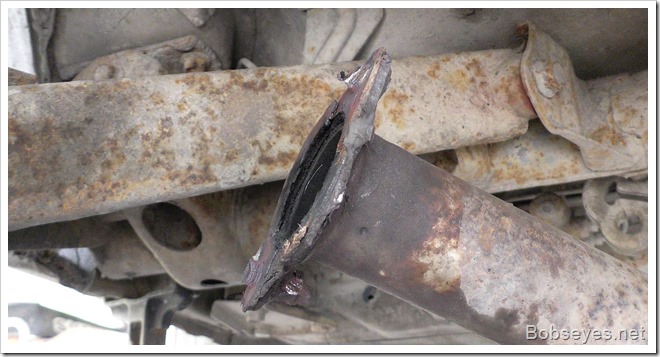 I also put some antiseize on the bolts so maybe the next guy won’t have so much trouble getting things apart although this should be the last time in the car’s life that this should need to be done. The car is a 1988 so the old muffler lasted a long time and I think it was the original one.

And it’s back together

Here’s the new bolts tightened down and ready to go. 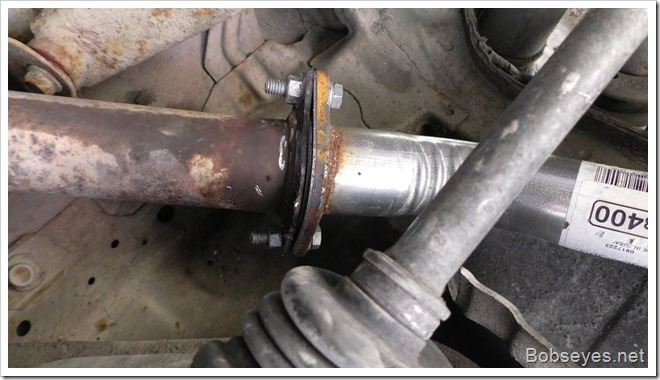 And here is the new muffler all hooked up. 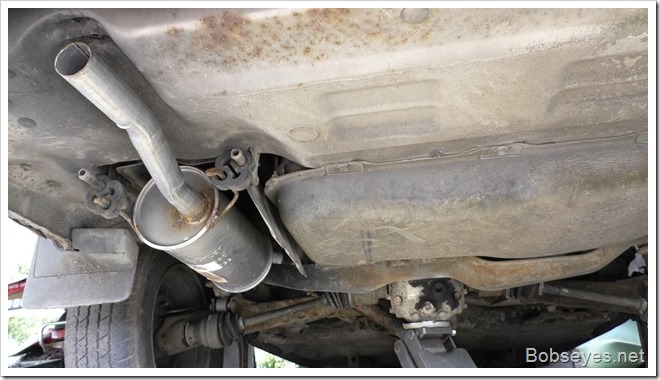 It took a while to get all the tools and things cleaned up and put away.

After that it was break time as I’d worked on that for over three hours.

After a good break I went out and let the chickens into this pen where the raspberry plants are. It’s a real lush pen and they are eager to get into it as you can see. 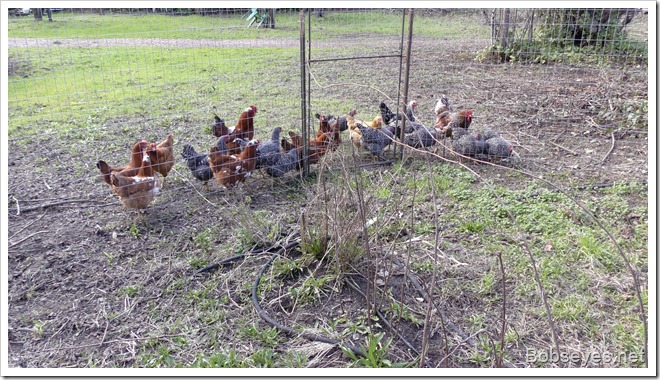 I hear the UPS man with my new cable

Just before dark I heard the UPS man out on the road so I went out to pick up my new network cable that I need to string out to the chicken coop from my computer to run my camera that I have mounted in the chicken coop. 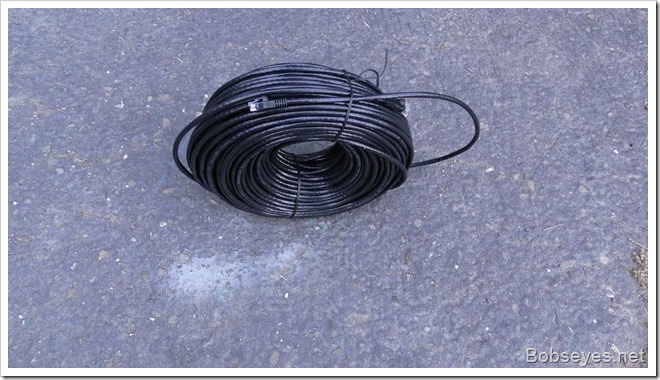 At first I was going to install the wire tomorrow but what the hey, I sorta installed it tonight temporarily.

The cable is up

That’s it, the smaller one going across my gate and you can see it’s starting to get dark. 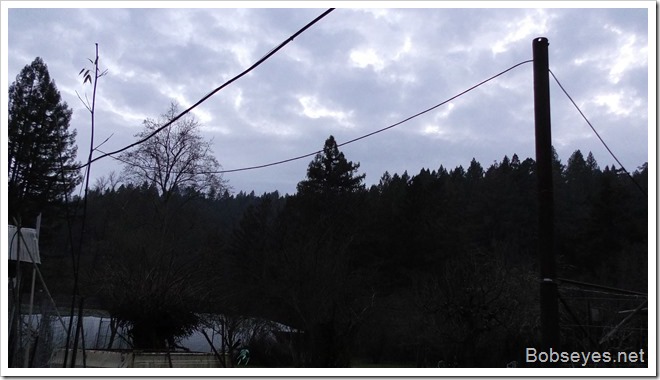 I closed the chickens in the pen for the day and went in the house to test out my new cable but I couldn’t get anything to work even after restarting all the network stuff.

I finally decided to uninstall the camera software from my computer, making sure to clean out the old software and installed it new and right away I had a picture to the camera.

The camera needed to be wired as my Wi-Fi signal to the coop wasn’t very good because of metal roofs, metal cages and too far away. Now the camera and the software work real well with no stalls and things are real fast.

Eventually I’ll make that wire a hotspot for Wi-Fi for the whole yard so I can mount a camera anywhere in the yard or several cameras.

Some more rain is falling

Shortly after dark a nice mellow rain started to fall and has been continuing into the evening. I think I put everything away that might get wet. I did have to go out in it and  cover up  my wood pile.

I was happy to get the muffler installed and had a nice day even with the bit of hard work.

Good to get er done.