Frist thing I went out to check on the new chicks and chickens. More have hatched and I have no idea how many I have as they move around fast and are all over the place. I noticed the nest box litter needed to be replaced and one of the nest boxes too as it was ripping out I think because the chickens ate it. 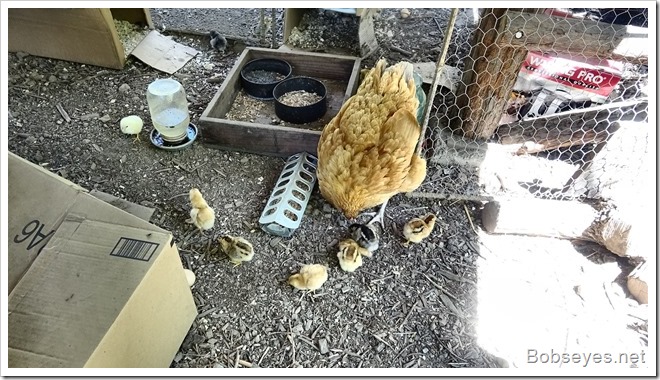 It seemed I was out of cardboard nest boxes and wood shaving too and I didn’t really want to go shopping today.

I was able to get two cardboard boxes from a neighbor and my brother suggested I use some redwood mulch in place of the wood shaving.

So I cut holes in the boxes so they can come and go and raked up some redwood mulch from under a big redwood tree and put it in all the nest boxes.

I did have problems with one hen not liking her new box or maybe not recognizing it. She moved in with another hen that was sitting on eggs which wasn’t too cool. I couldn’t stop her from going into the wrong box so I had to out smart her. I kicked her and her chicks out of the box and moved that nest box to a new spot and then moved the new nest box I wanted her to use into that spot that she liked so well.

I watched and after a bit and with a  little direction from me she finally settled in and her little peeps joined her. Good that that all worked out.

This is fluffy. She wants to be a mom and I’d like to  have more like her so I’m going to let her gather eggs and put her in a nest box in another day or two. She’s holding down the box behind her but right now she’s letting another hen lay an egg for her. That’s how they get enough eggs to sit on fast, they  have other hens help them. I think this will be my last mom this year as I may have enough chicks, maybe. 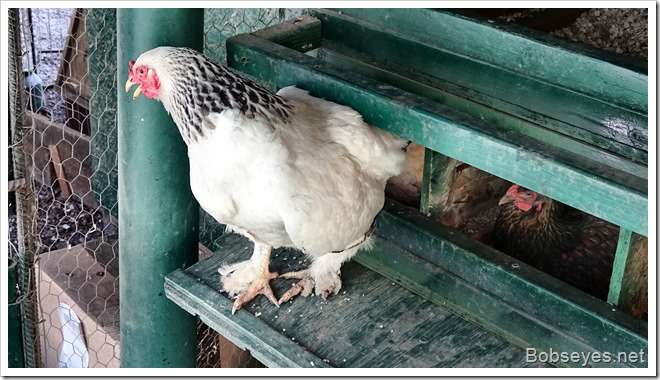 And I did some chair hopping and a good break then I loaded the new plants Joe gave me into the wheelbarrow for transport to the garden area. 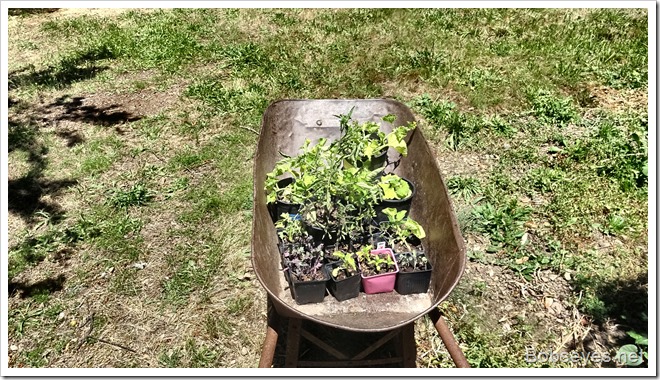 Here’s the garden area but it needs a bit of weeding to get things started so I weeded. 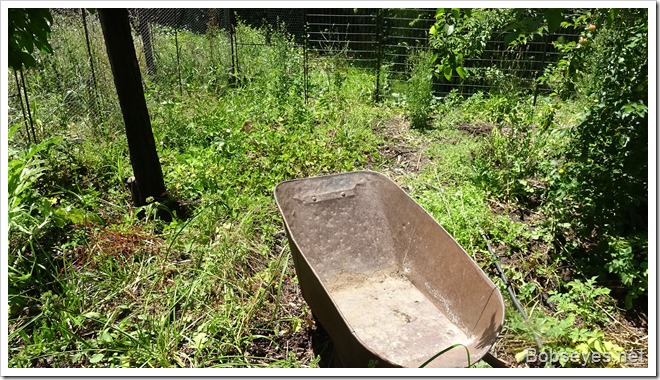 Then I brought in some mulch from one of the mulch  pens and spread it around. I think it took 4 loads. 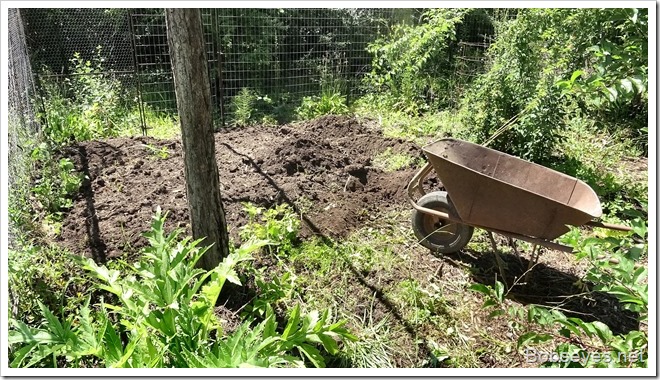 Now it was time to put out the pots of plants to figure out  where I wanted things. I sat in my chair and every once in awhile I’d jump up and rearrange a few pots until I thought I had it the way I wanted. 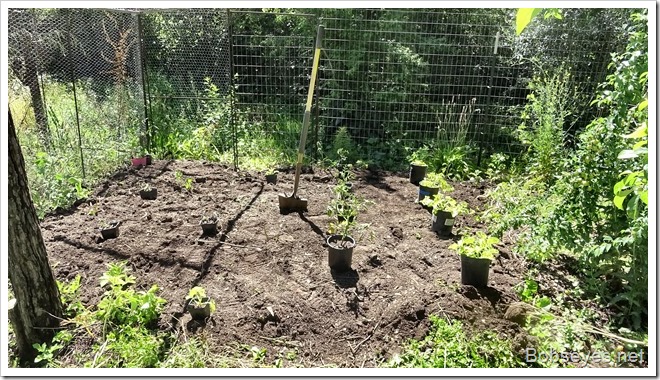 Now I could plant the plants which was easy in the soft soil. 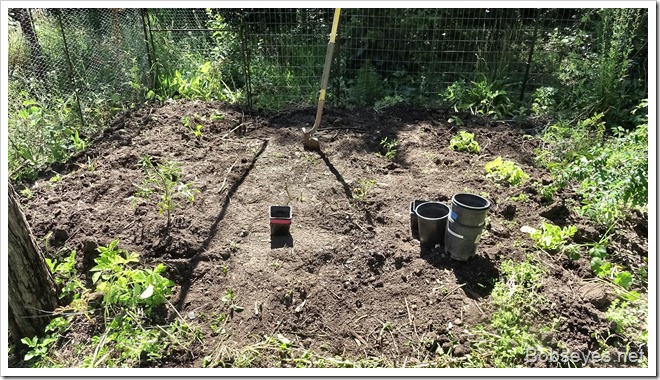 I had some wire hoops so I put them over the tomatoes and all the melons too just because I had them. 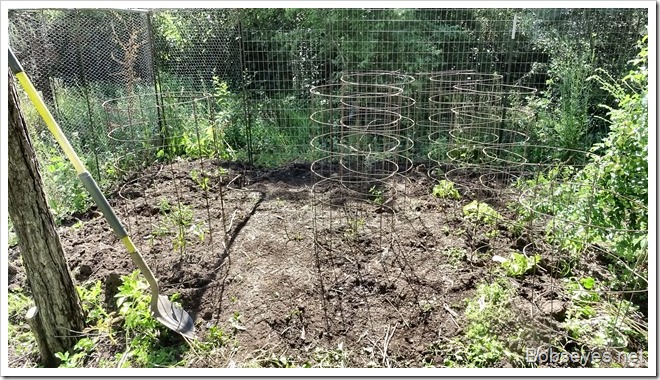 And to finish it off I put the water on all the new plants for a bit. 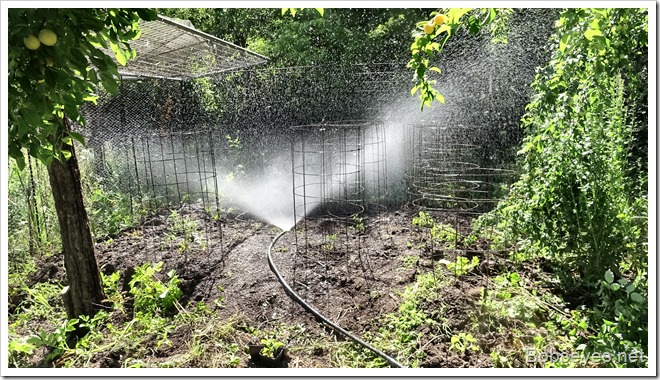 Good to have that done now they can get growing.

Chickens have a good life

While puttering in the yard I walked by these chickens taking it easy in the shade under the mulberry tree. 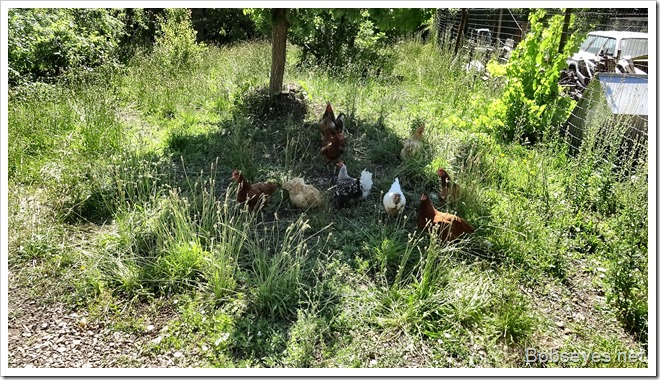 That was my day puttering around and getting a few things done.