Dentist and some shopping

First off today was getting my teeth cleaned at the dentists so off I went. A couple of the girls there have chickens so we shoot the bull a lot.

My hygienist has some chickens too so I have to be careful that we don’t use up the whole hour talking. OK lets get some work done I finally say and we do but still get some chicken talk in.

After that I needed to drive over to the VA clinic and do my lab stuff for an appointment next week. That way we can talk about current stuff instead of old lab stuff. I’m curious to see if I’m low on anything because with this corn sensitivity thing I’m not able to eat a lot of the foods around and have a very limited diet. I have a very limited diet and right now it’s limited the most it’s ever been. I’m just now starting to eat a bit of chicken and eagerly awaiting eggs which should be any day now. There are many things that can be made from eggs which should  help improve my diet a lot.

I gave the lab their samples and then shot the bull with a guy in the parking lot about kayaking for about a half hour or so. He had a nice big ol German shepherd dog sitting in his front seat.

Next up was Costco. I buy mostly nuts, 4 kinds, Kerry gold butter and a sack of potatoes and a sack of onions and one cheese from France. Also a pack of canned string beans with just water and sea salt and some avocados and some dates, oh and organic wheat flour which I use to make bread. Not much but it helps. Most of the items in a store have some type of corn stuff in them or it was processed with some kind of corn stuff. It’s very hard to get away from the stuff that’s why it’s so bad compared to just about anything else one might need to avoid food wise. I’ve been trying without success to get it out of my system for about 15 years now. I have decreased it enough so it’s easier to live and maybe some day I’ll succeed in getting it all out of my system but  the battle will never be over until I’m dead.

It’s a never ending ongoing battle which I’ll just have to deal with the rest of my life. Seems getting older one’s going to have to deal with something sooner or later and at least this isn’t killing me. In some ways it’s making me healthier. :O)

Ok Costco’s done and it’s a short drive down to Freeman’s hardware store. I pick up another roll of wire to fence chickens and some gate hinges and some 2×4’s to extend my chicken coop entrance roof a bit and a few other things.

I had a few more things to get at other places but I was shopped out for now so I headed on home, stopping for gas on the way.

Chickens will let you know

It was getting close to the time the chickens have been going out to graze the yard, but it was still too early but they were at the gate letting me know they wanted to get out. 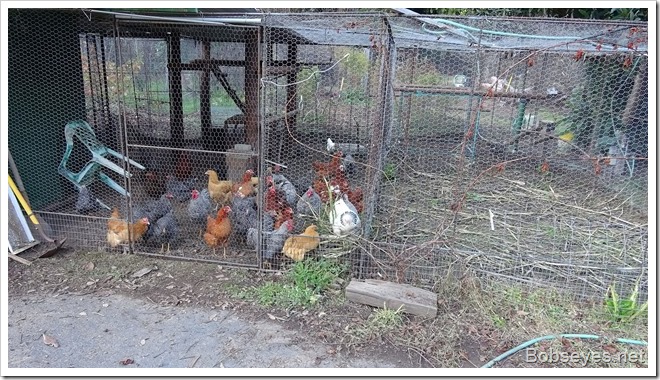 I made a cup of coffee and put the groceries and supplies away then went out to let the chickens out to graze. Most of them headed for the back yard were the raspberry patch is. See that bird on the right? He’s going to be my rooster. He was thrown in free with my chicken purchase and they don’t tell you what it is. You have to figure it out. Well we thought it was another breed of bird earlier but it wasn’t looking much like that breed now that it was more mature, so last night I did some research on it and finally found out what it was. 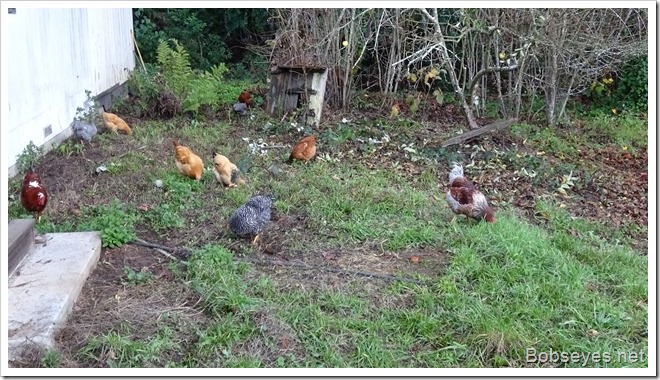 From the web page where I bought the chickens:

This variety of Wyandotte is relatively new and came to the United States from England a short time ago.  The original development of these came from crossing Silver Laced and Golden Laced variety’s of Wyandotte’s. After much work the Blue Laced Red was developed from this cross. The blue gene will color the chicks either light blue or dark blue in the lacing (the area around the reddish colored feathers) in both the baby chicks and the mature birds. Therefore you may have birds that vary somewhat in appearance but still display the beautiful colors of this very rare and unusual chick. Mature Blue Laced Red Wyandotte’s lay brown eggs and are medium in size with the deep – round -Wyandotte appearance.

My rooster Carmelo is a Blue Laced Red Wyandotte. 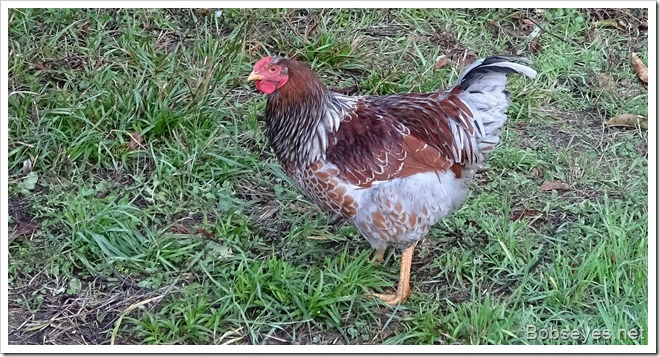 I think he’s a rooster but I could be wrong, time will tell. He’s starting to look more like a rooster at six months old.

So far Carmelo has been a good rooster. Quiet and mild mattered. I hope it stays that way when all his hormones kick in.

Use those tree trimmings, don’t throw them away

While the chickens were grazing I did a bit of pruning on some fruit trees.  I’m doing something different with the pruned off branches. The chickens like to scratch around the base of the trees which may or may not hurt the trees. So to make better use of the cut off branches and to help protect the trees, I decided to cut the branches up to short pieces and pile them around the tree bases for protection and to add nutrients to the ground for the tree. They should also attract bugs for the chickens to eat. Time will tell whether this is a good idea or not. 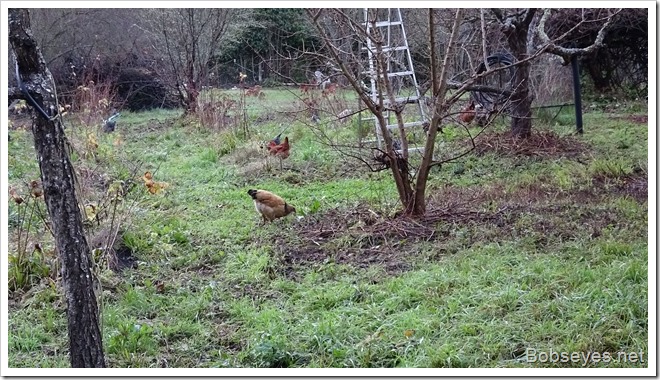 They can also cut down on the weeds which I used to do, but now with the chickens eating everything the more weeds I can grow the better as I now have two legged weed mowers to take care of them. :O)

One of the mistakes most farmers and most people make is they haul off all the natural things plants do for themselves. They take all the cuttings and weeds to the dump instead of putting them into the ground like a forest does. People tell me you can’t grow stuff in forest mulch as it’s too acid. Bull, what do you think a forest does. Ever see all the things growing in a forest dying because it’s too acid.

Worst then that is those same people then go to the store and buy man made stuff which is full of who knows what. If you want good mulch just pile up any type of trimmings and forget about it and it will make real nice black dirt, in time. Putting the trimmings under trees does the same thing.

I only did a little pruning as I wasn’t into it much today with all the shopping I was wore out.