Taming Chicks and Pallets For My Mulch Boxes For the Chickens

Last night I left the coop door open so the peeps could go out by themselves to the runs in the morning to feed.

When I first went out today, I found them all resting as they’d been feeding earlier. 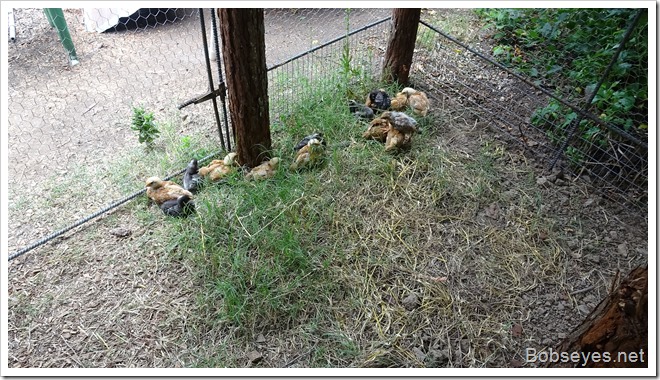 They seem to tire out after feeding or more likely they are just digesting what they eat.

Here’s some more of the little peeps resting on the grass cutting where I want them to sleep at night which I plan to start them doing soon as there really isn’t much need for them to be in the coop at night as the weather around here is pretty nice and I hope I made the runs varmint proof. 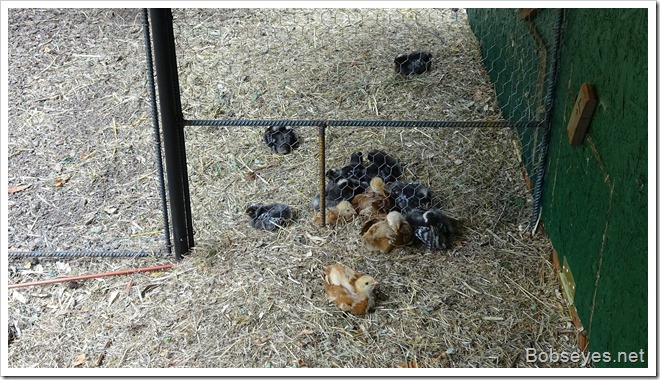 I watched a video on YouTube last night on how to tame your chickens. They said to start by getting them to feed out of your hands.

So this morning I dug some worms in the blueberry patch and tried feeding them by hand. Most of the birds would take a worm out of my fingers so that’s a start.

That container is full of worms. After they had their fill of worms and slowed down, I just left the container there for them and they did empty it later. I’m sitting here feeding them worms. They grab one and run and most of the others follow the one with the worm instead of getting one from me, but eventually I think most of them get one or two worms. They are big night crawlers so I don’t think they can eat very many of them yet. 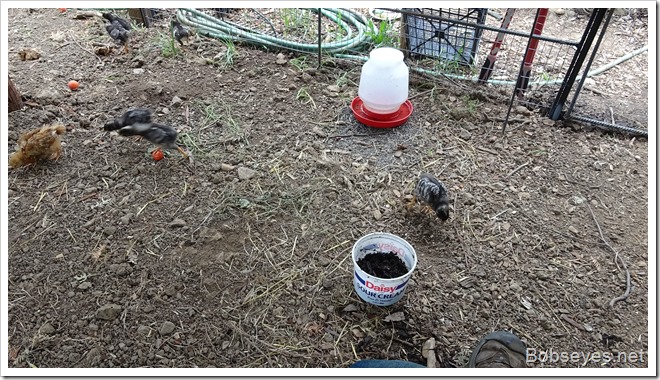 Anyway, I thought that was a good start in their taming down.

I also decided I needed some way to tame down my mulch run as mulch stuff was getting all over the place which is alright but I thought things would go better if I had some way to manage things a bit better.

So I decided to make some pallet mulch pits. That’s when you take four pallets and form a  box and proceed to fill it with mulching type stuff including all the table scraps. When things mulch down they make more goodies for the chickens to eat including all the worms and bugs they attract as well as the fauna in the mulch as it breaks down. And a bonus is when things are done, you have some fine soil.

Now I needed some pallets and I knew my brother Tom had a few of them. I needed at least four to get started. Eventually I’d like about four mulch boxes so I can rotate.

Tom said I could have a couple of his newer ones and he said there were some old ones over in the apple orchard.

So when he left for a farmer’s market I borrowed his golf cart to get the pallets.

I picked up the new ones first then unloaded and drove over by his chicken coop to check out the older ones here. 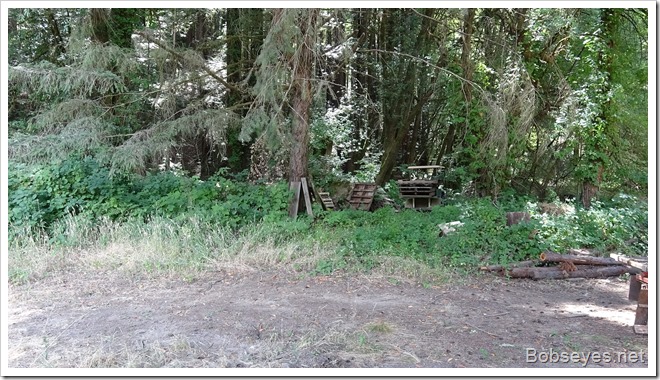 Only a few good ones

Most of these were pretty rotten but I did find a few good enough to get one unit built. 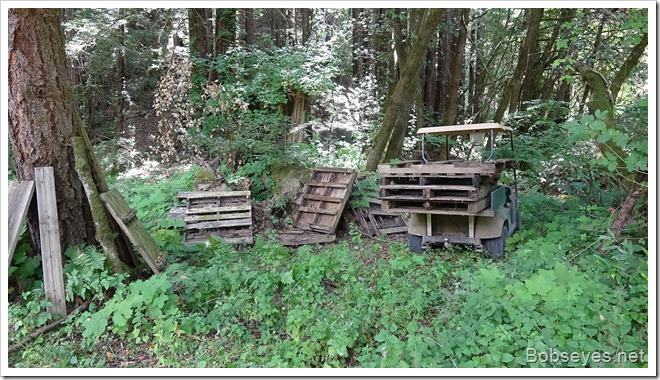 One last look for my lost chick

As long as I was by his chicken coop I went in to see if I could spot my lost chick  as the chicks are bigger and the light is better.

Here’s all his chicks. 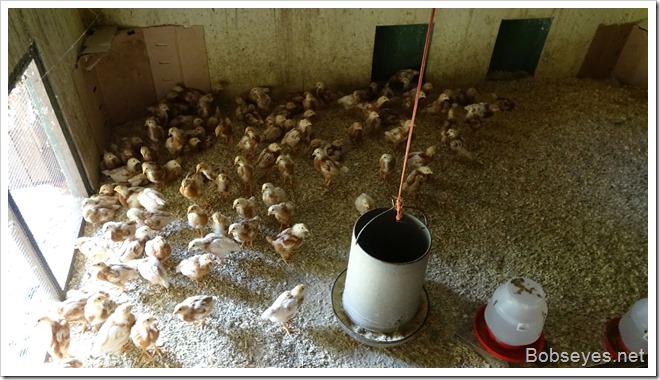 But my lost chick wasn’t in there. It may have died earlier as my brother lost a few of his chicks early on.

I knew where there were some old blocks close by so I drove over there and loaded them up. 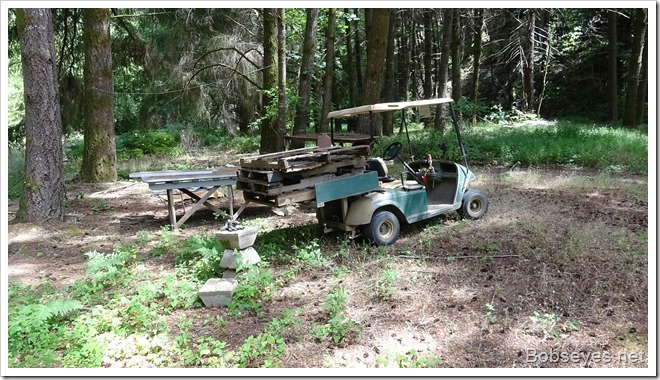 I also spotted this old box and I thought  the plywood looked pretty good to build something with such as nest boxes so I put it on top and headed on home with my bounty. 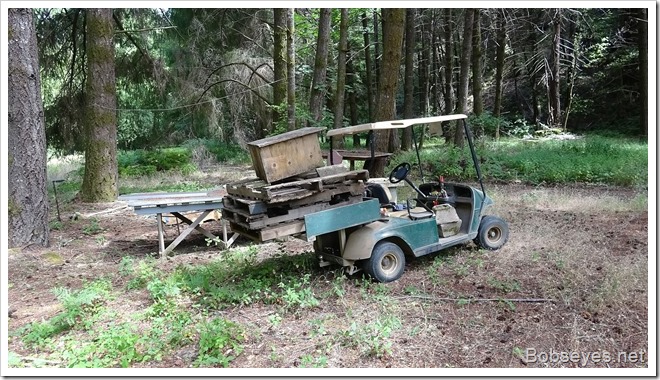 I placed the four blocks on the ground and put four pallets on top of them to see how things looked. I plan to fill this from the top and take new soil out of the bottom. It’s ok for the chickens to get in there and feed all they want on the mulched stuff as that’s it’s main purpose. 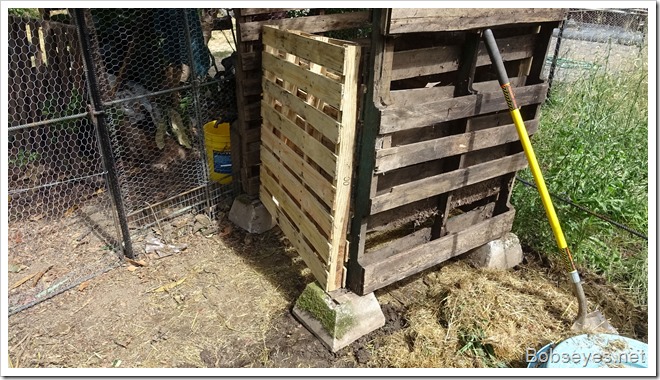 I still need to wire the pallets together to keep them from falling apart.

I need to fine some more pallets

I’ll likely make three more of them when I find some more good pallets once I figure out where to get some. In the mean time I’ll work on filling this one up. It didn’t take the chickens long to find it and start hopping around on it.

They wouldn’t eat out of my hand this time 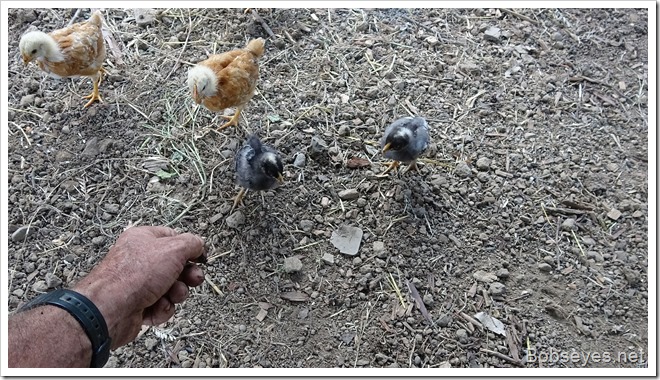 Nope, no takers this time, they must not be hungry enough, so I through some worms out to them and they ate a bunch of them. Then I turned the worm container on it’s side so they could see the worms and left them for when they got hungry.

A use for that old box

In the mean time I was thinking about that box I got and decided I’d try it here for the chicks to sleep in or use and set it up and filled it with some grass cutting. I put some grass cuttings on the top too to collect any poo they might deposit up there. This box is on the outside of the coop in the main run. Note the chicken door to the coop is closed to keep them out of the coop. 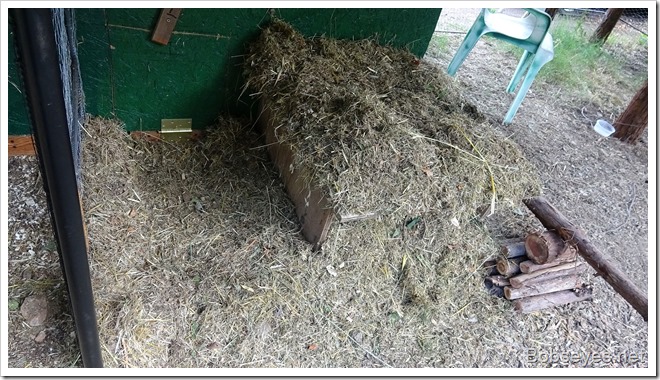 Seeing how it goes

Just after I installed the box the cat came by to have a look, but didn’t seem overly interested. 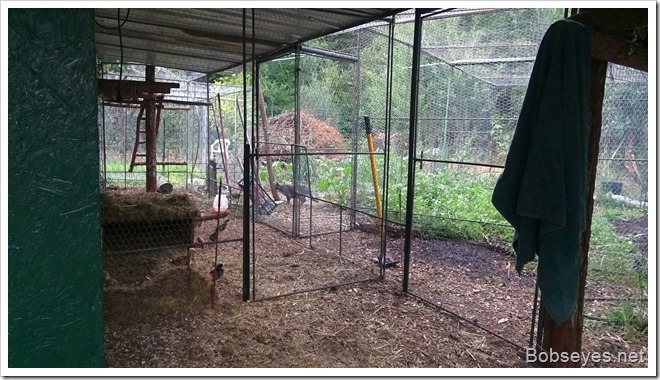 (Visited 219 times, 1 visits today)
This entry was posted in Uncategorized and tagged chicks, mulch box from pallets, mulch boxes for the chickens to fed in, peeps, taming the chicks. Bookmark the permalink.