Sunny, Low Wind and a Paddle Up the River On a Fall Day

Need a paddle and is the mouth closed

I hadn’t been kayaking in a about a week. The wind was supposed to be down so I headed on down to Jenner just before noon today.

I put my boat in the water at the Jenner boat ramp and paddled across the river to Penny Island. I’d already decided to go up river today, a couple  miles, so I headed that way.

Is the mouth closed

I was surprised to see water was in the little channel on the upper end of the island as it was going to low tide, but the water wasn’t going down.

Here’s the little channel full of water where I stopped for a bit. 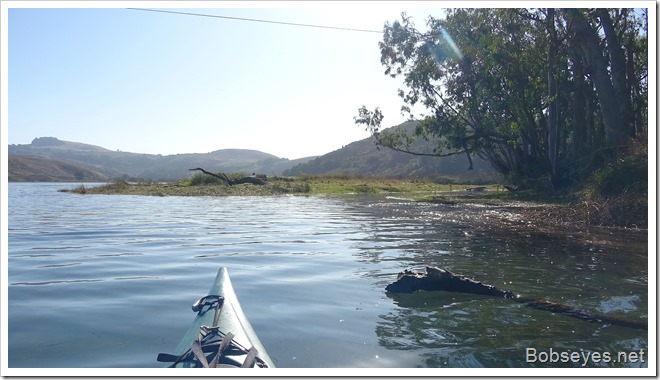 The water level being that high usually means the river’s mouth is closed and the water is backing up in the river. I’ll have to check that out before the day is over.

I headed on up the river. There was a light wind but it was decreasing and the sun was out. Being by the ocean there was a water haze in the air. 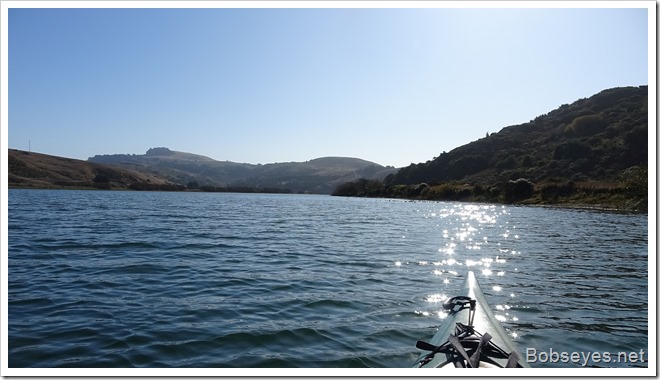 I paddled along here going by these mud hens. They feed on the dead vegetation under the water. The vegetation dies when the sun goes low in the sky in the fall. 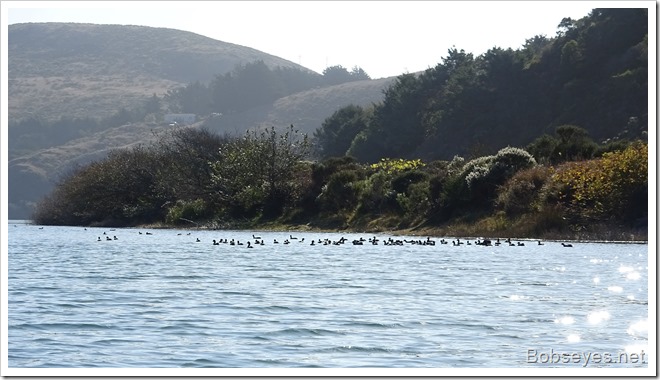 I stopped here for a spell at a place I call Muskrat. 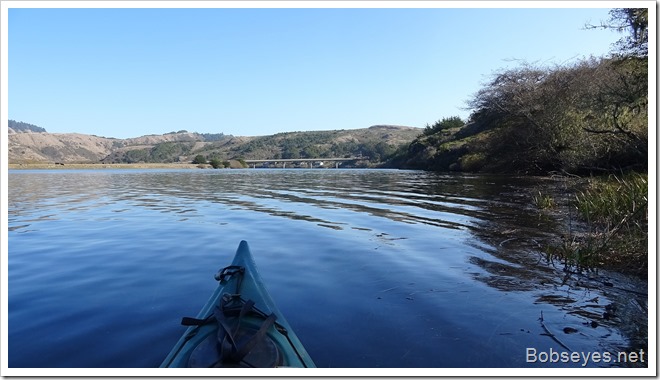 I paddled on up under this bridge on highway one, the coastal highway. 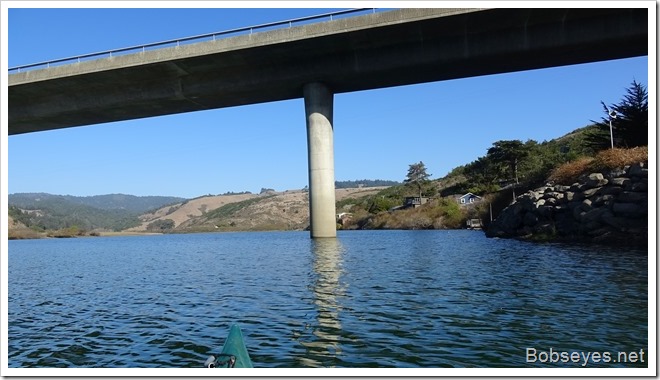 I was paddling along just after going under the bridge when I thought I heard, hey Bob, but I wasn’t sure so I stopped for a bit but then continued on and heard it again. I looked and looked and eventually I saw a person waving from a house on shore. The person made it down to the dock just down below me. You can see her there on the dock if you look hard. 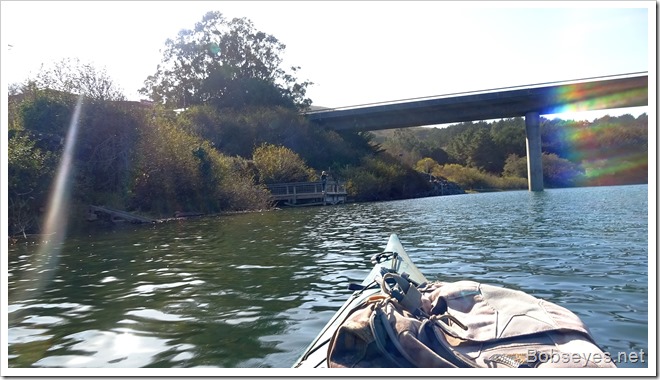 I paddled on over and it turned out to be Mary a lady I knew who lives down here that I’ve talked with before.

We shot the bull for a half hour or so, until she said she had to check on her new dog, a rat terrier I think she said it was. She said she’s been teaching it to ride on the front of her paddle board.

I continued paddling on up the river another half mile or so to Willow Creek. I’d expected the water level to be too low to paddle into the creek originally but with the water as high as it was I was able to paddle right into it. 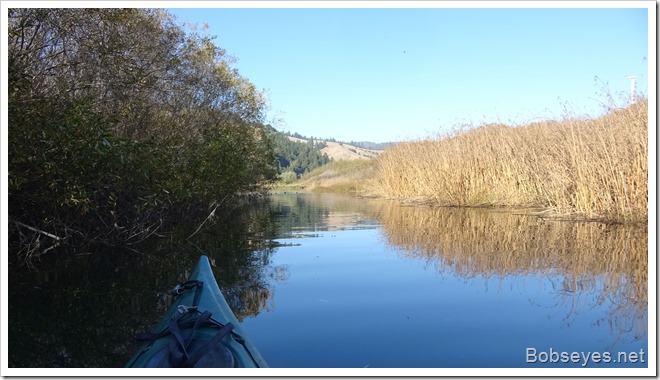 There were a bunch of mud hens in there that had no where to go so they dived into the bushes. 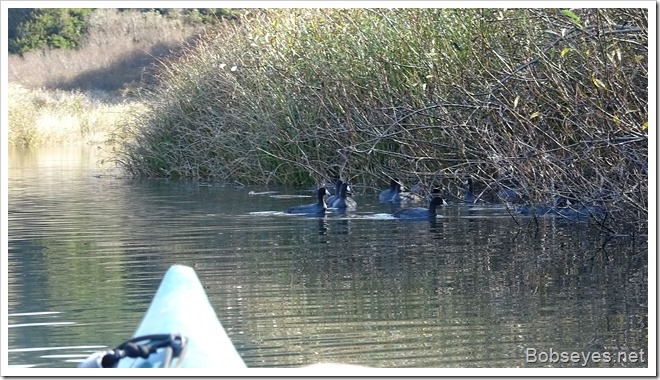 I paddled in as far as I could about a quarter mile and sat and had a break enjoying the sun. 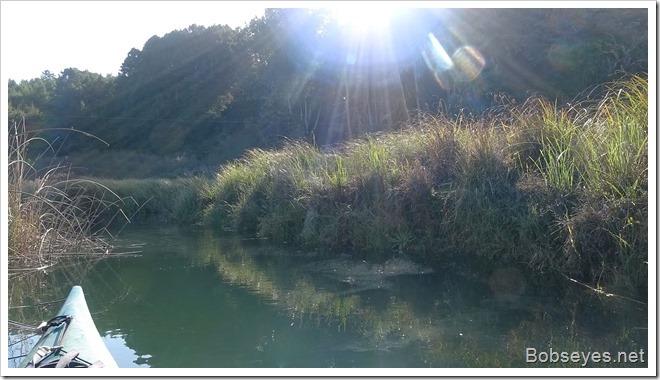 When I paddled back out to the river I stopped in this spot right by the creek and sat and watched. 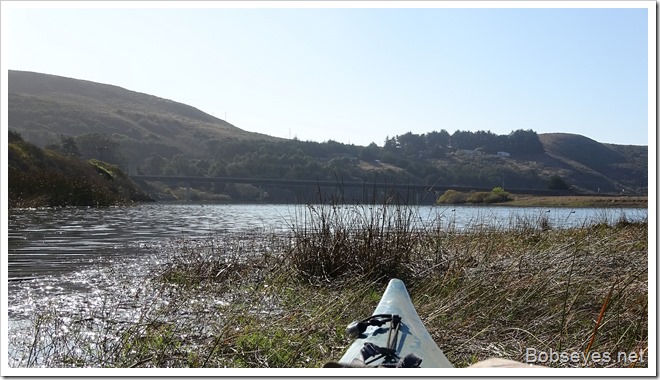 I heard some big splashes down by the bridge and when I looked I could see some harbor seals. 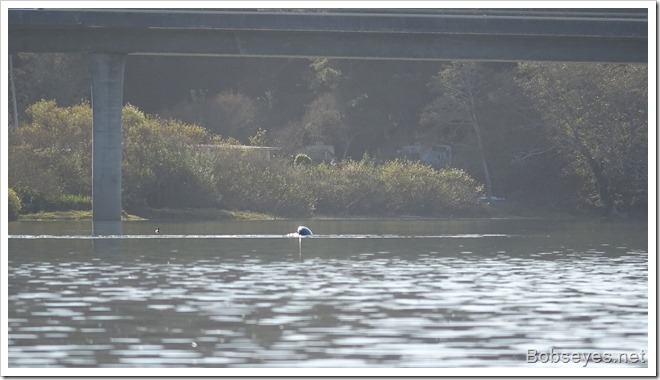 They make these big splashes when they are eating a big fish. They splashed around for about ten minutes and then disappeared. 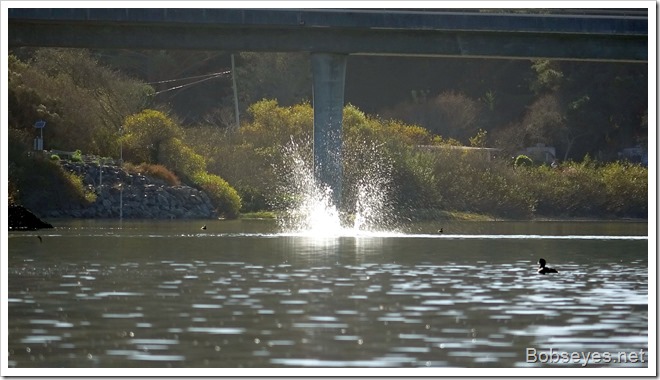 The light wind died down for a bit as I paddled back down the river along here. 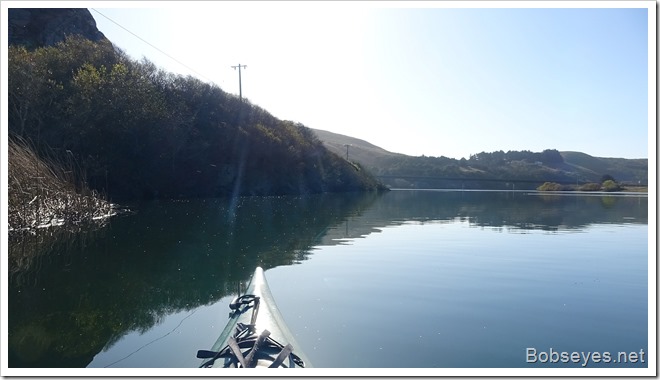 I paddled across the river to this side as I like to go along the shore line looking for birds which like to hang out along here. 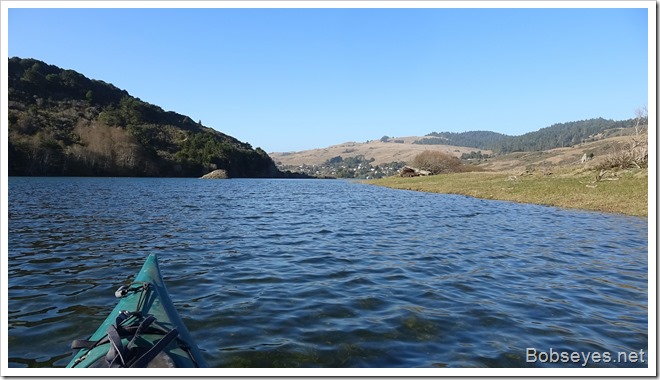 There were mostly geese today. 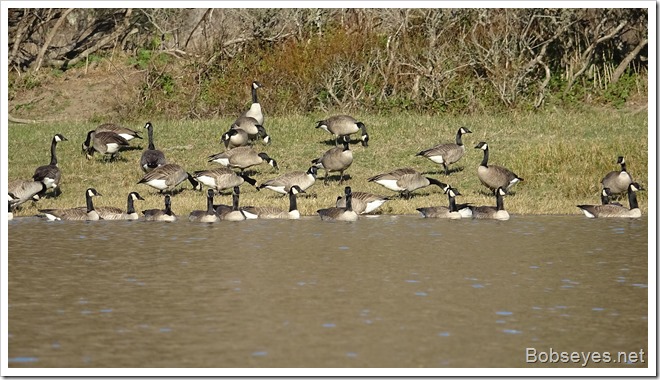 And more geese up ahead. 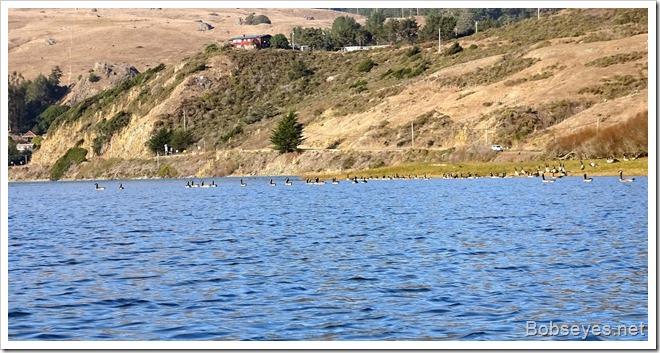 I was almost back to the boat ramp at Jenner where I pulled out for the day. 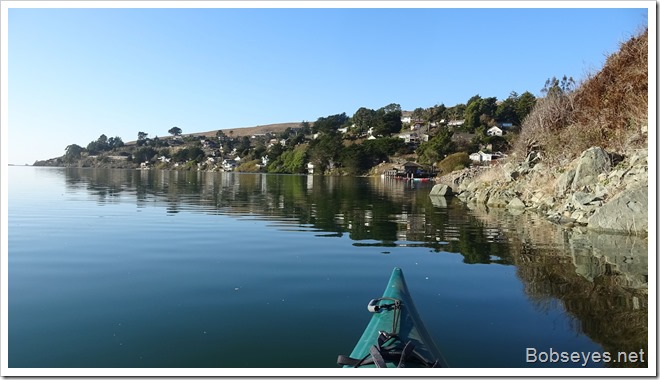 Checking out the river’s mouth

I was still curious what condition the river’s mouth was in, was it closed?

I drove on down to the town’s overlook to have a look.

The river is on the left and the ocean is on the right on the other side of the sand bar. That’s Goat Rock out there, the squarish one. 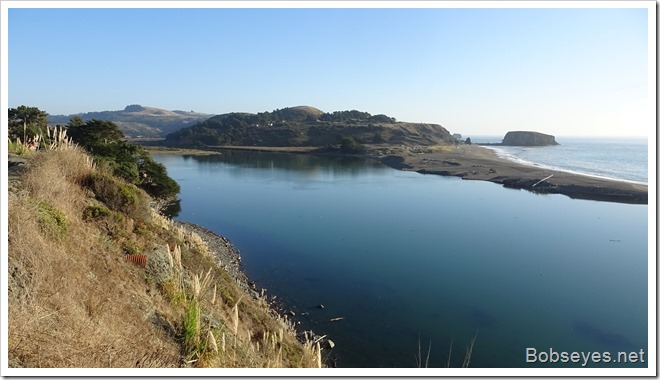 Sure enough the river’s mouth was closed. The wind and the waves blow the sand up onto the bar and close off the river sometimes like now. The river should be going out right there in the middle. 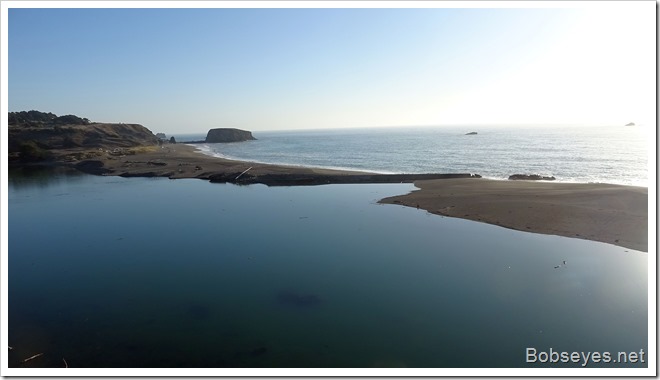 Now that my curiosity was satisfied I drove on home.

First a short nap then I puttered in the yard and did a bit of chair hopping. The sun was already down so I was discouraged from doing anything constructive.