My dental adventure in Algodones

Let’s see now. After my dental appointment and getting back across the border without any problems I headed over to Winterhaven to see if I could find a library to post my blog and check email.

Winterhaven isn’t very big so I drove around looking for a library but couldn’t find one but I remembered driving by a post office so I drove back to it to catch a local coming out to ask where a library was as I’ve found in the past that works much  better than asking just anyone on the street.

A lady came out and I asked. She said they didn’t have one but if you go down that road a ways at third street you will see a park and you should see the library. That road was a  short distance to Yuma and it was a Yuma library, a very nice one. I parked and tried the internet but I was too far away so I went on in with my computer.

Inside the connection was very good so I posted the blog but for some reason I couldn’t do email.

This was a rather new library I learned talking with the security guard on the way out. It was a  high  ceiling place, rather open and had sections around the library both for different age groups and things of interest. Lots of computer sections too.

From there I drove back to Winterhaven and  resisted buying some ice cream as I needed to stay as corn free clean as I could to test the tooth drugs I was supposed to take.

It was a good thing as I found the pain pills were getting me a little and quit them.

Hunting for a better camp spot

I needed to find a better camp spot so I drove back over near the Indian casino and drove down the water canal road just past the casino to have a look. It went about a half mile before it ended but there were a bunch of RV’s parked along it’s side so I pulled into a dirt road near the end and stopped to check out a spot for camping that looked like I could back into.

During that time I saw a man and woman coming down the road on a walk so I engaged them. They told me if I drove down the road a bit farther I could camp in the trees and there were more camp spots so after shooting the bull with them for awhile I drove on down that way. The guy was really interested in my old van.

That road surprised me as it came out at the Indian parking lot where one parks and pays six bucks and walks over the border to Mexico.

I decided not to park under the trees as there were a few mosquitoes about and thought they might be worse under the trees. I parked out by a big rock quarry with no one else around.

This was my camp spot at the rock quarry a nice camp spot much better than the one I had the night before. Much further away from the trains and freeway. 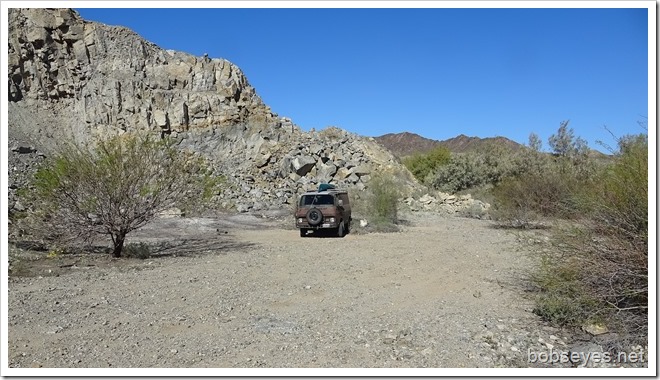 The night before I had some mosquito problems. These ones would fly into the van in the day time and not attack but wait until after dark to bite. I put out the lights and use a flashlight to attract most of them and play smash.

I installed my mosquito netting with the magnets I carry for the purpose so I could keep the window open for air. 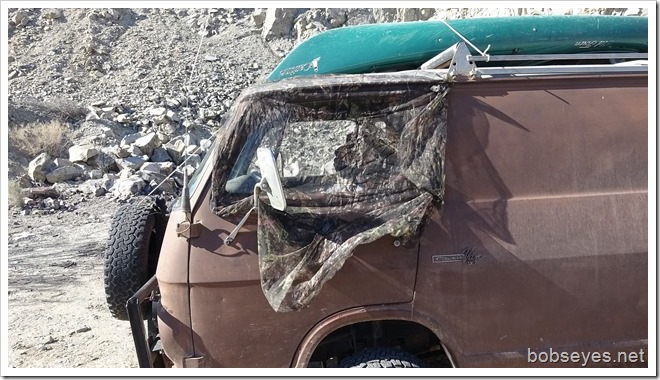 As it was the wind came up fiercely and I don’t think there were many mosquitos out. The wind also cooled the night down with made for better sleeping conditions.

The next morning I got it going and just sat around enjoying the day until my appointment time to get my crown fitted. I was getting a zirconium crown which they had to farm out so took another day to get the  job done. Zirconium crowns are also more expensive than porcelain ones. Gold costs the most these days.

I arrived a bit early so spent a lot of time shooting the bull with the people that were waiting in the waiting room like me. I found it interesting that the Canadian’s were mostly about my age and lived through all the same stuff I did so we had a lot in common and we had some great conversations.

Sam does a good job

Sam the dentist fitted my crown explaining it all to me. He had to send it back to the lab to get some kind of coating on it after he fitted it which was going to take about  half hour or so.  So I went back to the waiting room and shot the bull with who ever walked in the door which made time go fast.

When I went back in for the final cement I told Sam I’d been shooting the bull with all his patients. He knew and said the last guy in before me wanted to buy me a beer. :O)

Anyway Sam finished me up and explained every thing I needed to know and said the crown was guaranteed by the lab which I’m not sure the ones I got in the US were.

So now all I had to do was get back across the border so I headed across town for the long line.

Now this was my third time crossing through the town and I’d learned a few things. The first time I walked through town I sorta ignored the hawkers and just said no.

But I learned to say I’m set and engaged them a bit and parted with have a nice day and the routine changed a lot.

When I got to the border crossing line it was the longest I’d seen so I got in line and immediately started to engage in some chat as it made the long line go faster and there were a lot of interesting people around, including me. :O)

Eventually heard someone say, hey Bob and looked up to see Dave sitting on a bench waiting for his wife Joanne that was in line somewhere behind me. The line was moving so I couldn’t talk.

Helps to know the rules

I knew the customs procedures by now and the border guards where nice today so no problems.

I walked back to my van and took about a fifteen minute break before starting back towards Quartzsite. The roads around Yuma were busier than I liked but I was soon headed north on 95 with very little traffic.

I spent the night at my Quartzsite camp and today drove on over to Patti and Marty’s. Marty is still flat on his back with a bad back. He’s supposed to get a cat scan soon.

Marty asked me for a favor. Would I go up and cut the flaps that had torn and were blowing in the wind and  driving him crazy. The flaps are on his pull outs and right over his head while in bed.

Sure, I got the ladder out and trimmed the parts that were flapping off each end.

Napping and taking it easy

After that I retired to my van in his yard and worked on writing this blog, but mostly napped and took it easy all day until evening where the writing is finally getting done.

Summing up my adventure

To sum up my adventure to Los Algodones Mexico to get a crown replaced and a root canal.

Although I was a bit apprehensive at first especially without the proper border crossing papers, I learned a lot and met and talked with a lot of interesting people.

My dentist was top notch. I think he is a couple steps above my US dentist which is also very good but could learn some stuff from Sam.

So I actually had a fantastic time on this adventure as well as saving a lot of money.

That pretty  much brings you up to date on the goings on.