Kayaking with the fishermen

The river has been muddy from all the recent rains but now it should be starting to clear up which means the steelhead fishermen should be out on the river in their boats.

Sooooooooooooooooo, off I went to Monte Rio with my kayak to see what was going on and just to enjoy the river a  bit.

The parking lot at Monte Rio looked like this. All those boat trailers means there are fishermen on the river today. 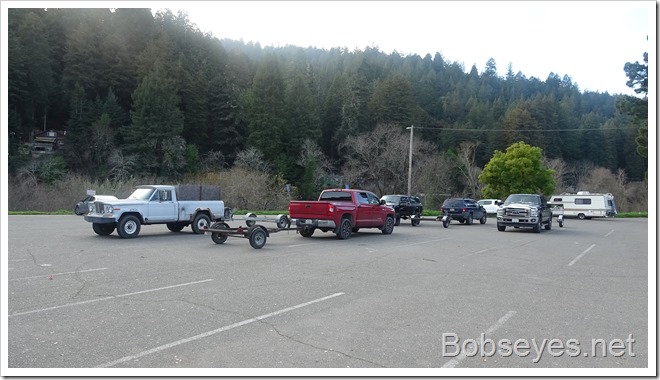 I put my boat in the water at the boat ramp and paddled across the river.

This boat came up the river. It was a guy named Mike and he was taking out for the day. He said the fishing wasn’t too good yet, but it was great to be on the river. 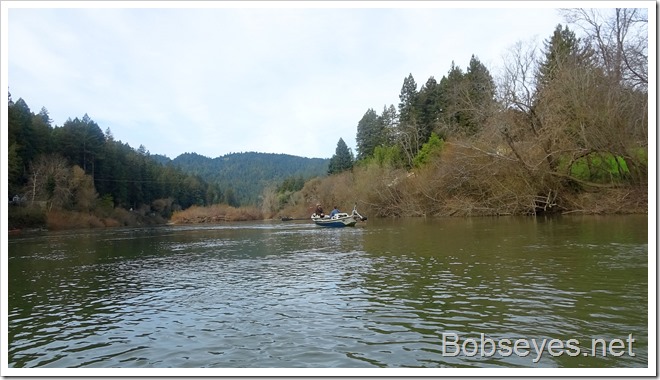 Just below that was the Slot, a popular place for locals to fish and mostly shoot the bull. I was checking them out and trying to figure out how to get by them without the current sucking me under their boats as the current is pretty strong right there.  I usually like to stop and shoot the bull a bit but I got in the current on the left and couldn’t stop without going over their fishing  lines so I shouted some greetings and continued on down the river drifting in the current. 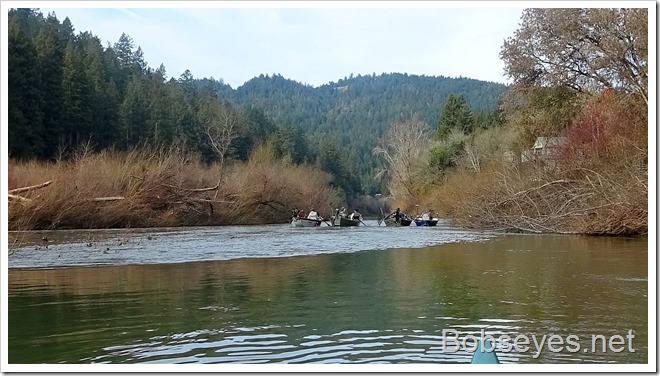 The river was pretty nice out today with very little wind so I just drifted along at the river’s speed. 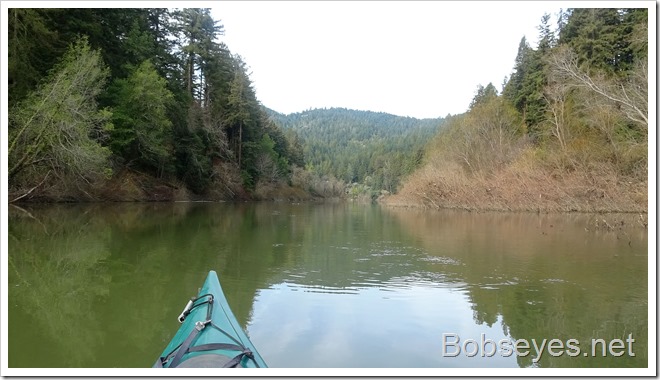 There wasn’t too much wild life on the river today. These two golden eyed ducks passed by me. 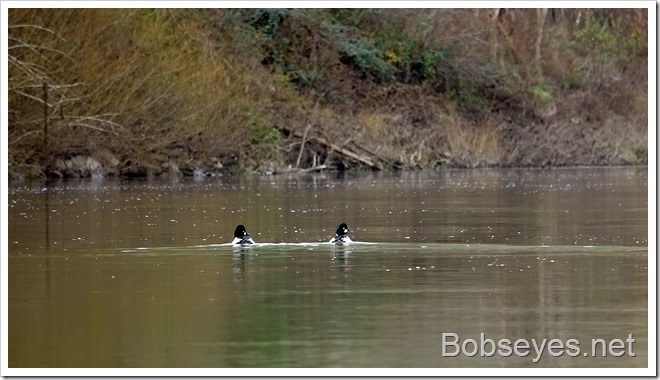 I wasn’t going very far today, just down the river to the Villa Grande area, just up ahead a bit. 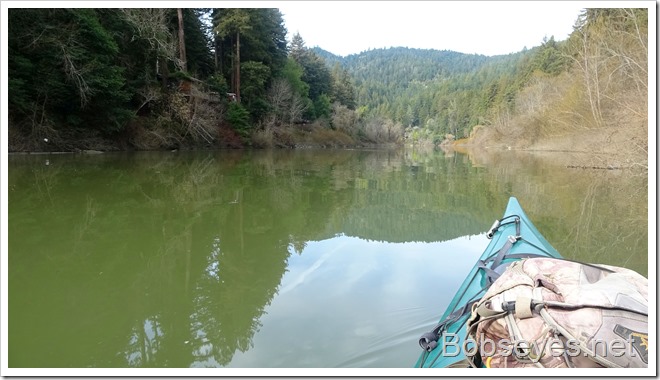 I made it to Villa Grande and was just sitting around watching stuff and taking it easy when this fishing boat came by and settled into the slot at Villa Grande to fish.

Soon another fishing boat came by and joined the first boat as I watched from my spot.

I sat in the area and watched for an hour or so then started my trek back up the river against the current. 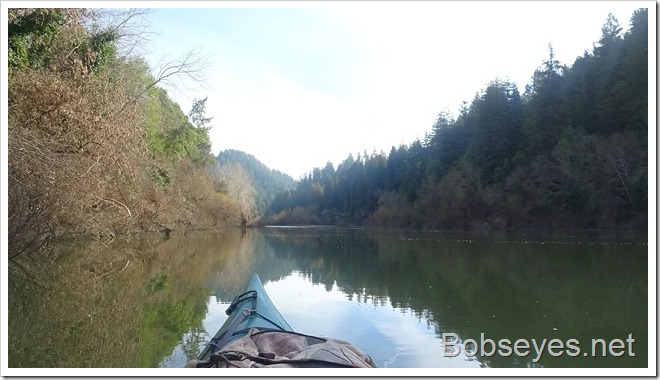 I made it back up to the slot and paddled in to the left of the boats and shot the bull for a bit. These guys are mostly local fishermen that I know and they know me but I have a problem remembering names these days, but once they say their name I know who they are. Just an older age thing. It’s a bit embarrassing, but it is what it is. 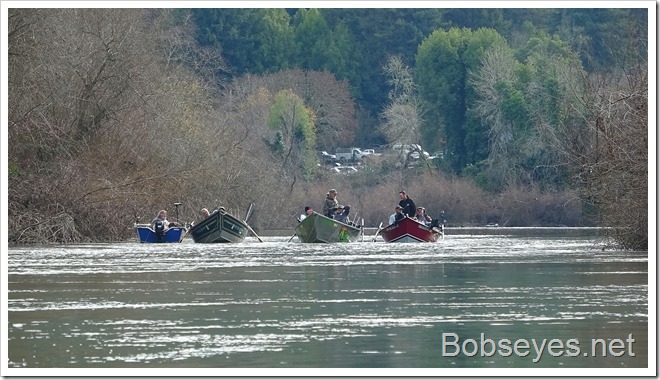 No one was catching anything but they were all happy to be out on the river. Even without the fish catching they have enough bull to keep them busy. :O)

I left them at it and headed for the boat ramp and went on home.

After a break I got the wheelbarrow and shovel out and loaded up the chicken poo from under the big bird roost. I removed three loads of it. 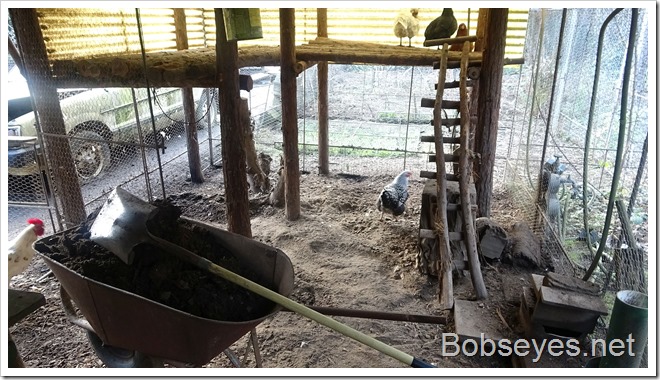 The manure got spread thinly around some fruit trees. 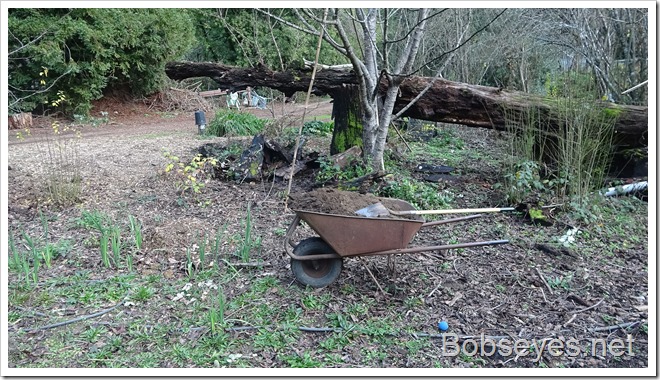 Then I moved two loads of woodchips back in to where I removed the manure and let the chickens spread it out. 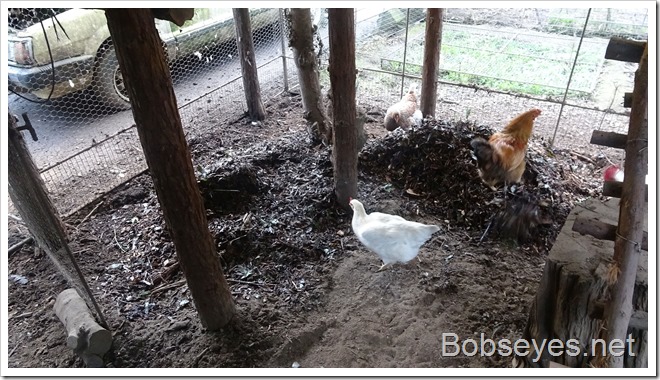 There was still a little time before it go it got dark so I sat around chair hopping for a bit. 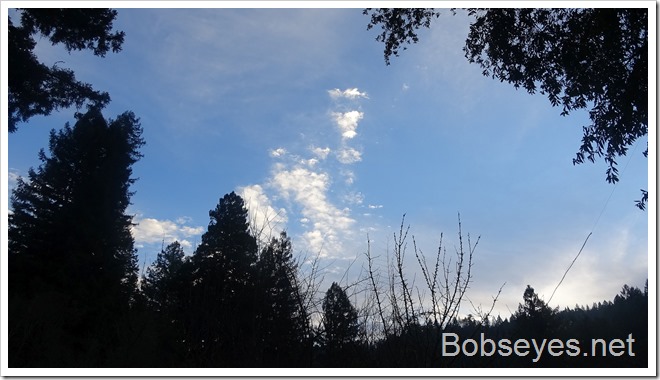 And then the day was over and it was in the house for me.