Once I got it going today just before noon I could see it wasn’t raining and the weather guys said it wouldn’t start until later in the day around 4 so I thought it’d be good to go down to Monte Rio and see how the fishermen were doing fishing for steelhead. If it started to rain I could pull out and go home.

I got my stuff and drove on down to Monte Rio. On the way driving into the small town it started to shower. That was when I remembered I forgot my rain pants. I have a rain jacket I wear as a wind breaker all the time on the water but no rain pants today.

I continued on down to the boat ramp to  have a look and it was only showering very lightly so far. 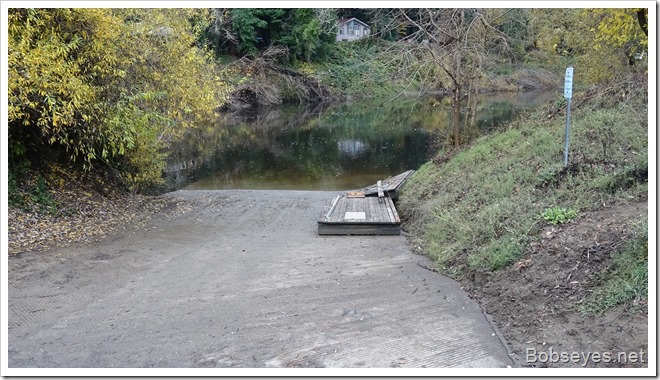 And looking down river looks nice too. 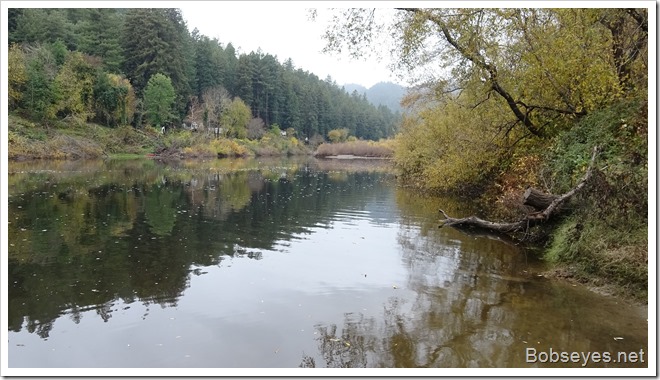 So I put my boat in the water as the showers picked up a bit.

I’m looking down river towards what they call the Slot where fishermen like to sit in their boats and fish and there was one of them down there so I started a drift down that way. 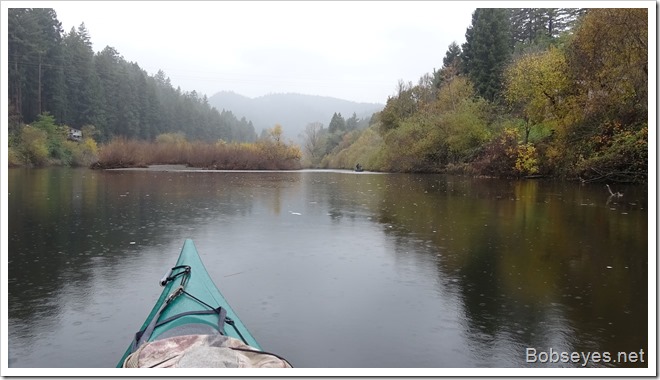 There’s the one boat in the Slot and it’s starting to shower more. 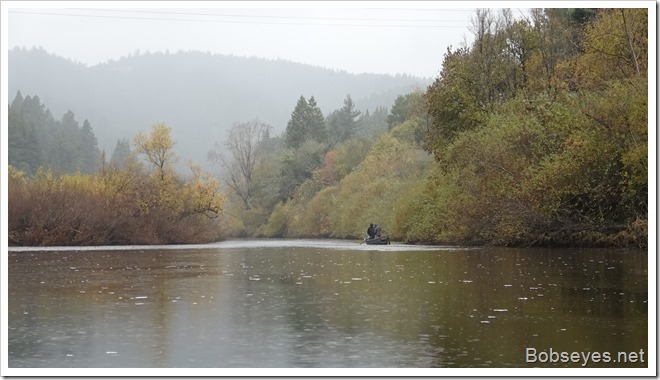 They were getting on their rain gear as I approached. 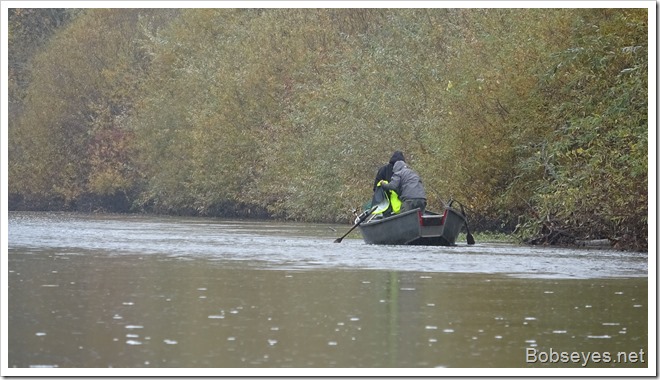 Shooting the bull with the fishermen

I never can remember most of the fishermen’s names from year to year, older age stuff so I asked their names. Alex and Angel were fishing away but no action. It’s still real early in the season.

I pulled in by them out of the current to shoot the bull. 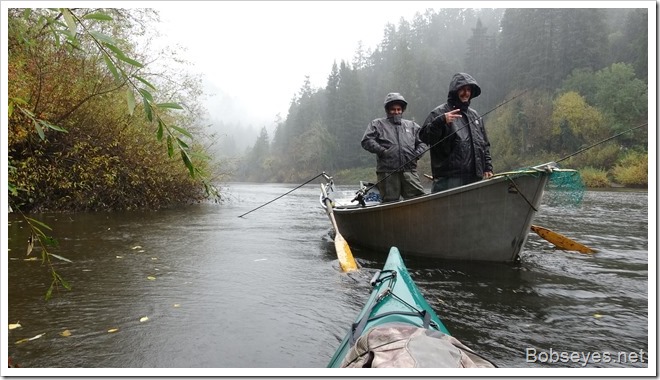 Well we shot the bull for about an hour in the rain showers that would come and go and once they stopped so I said I was going down stream a bit but before I got going the showers picked up a bit harder so I curtailed that idea.

After that it looked like the rain was in much earlier than the weather guys said.

I left them standing in the rain and went around them and started my paddle back up the river to the boat ramp. 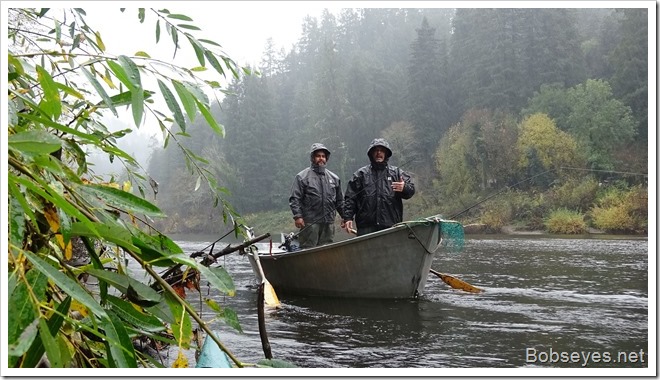 Shortly they followed as it was starting to rain more seriously.

I talked with another guy in a boat on the way to the ramp who was enjoying the rain drinking a cup of coffee.

Here’s the ramp  where I got out and drove on home. I was on the river for about two hours which is much better than not being on the river at all. 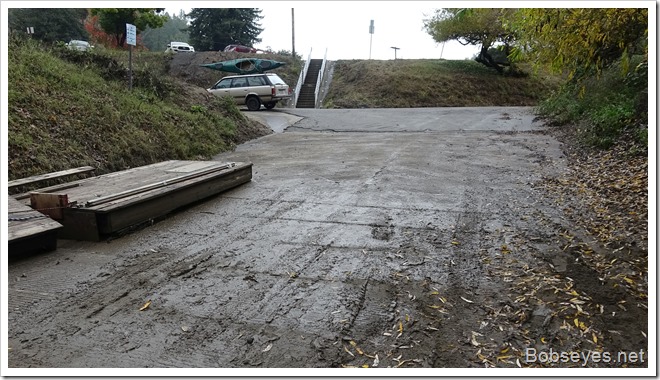 My genes were soaked but otherwise I was dry so when I got home I got into some warm clothes and all is good. Let it rain and it is.

Once I got comfortable I went out and checked on my chickens and picked up some eggs.

I wanted to do some more testing for corn in my food so I was going to make the two ingredient cake again in my instant pot.

The other day I made the recipe to test out my chocolate to see if it was corn free. It was which was good as I have 25 pounds of the stuff.

I want to test out my butter for corn, Kerry gold but it would be nice if this cake had some sugar in it as my chocolate is bitter sweet so not much sugar in it. I had about a half of yesterday’s test recipe left and it wasn’t sweet. I was going to make another batch of cake but then I had an idea. Why not just cut up the left over cake into small pieces and pour some sugar on it and mix it up and eat it so that’s what I did yesterday to test out the C and H sugar for corn. I ate it all and it passed,…….. great.

Now for the butter test

So today I could make the recipe with sugar and butter to test out the butter for corn so that’s what I did.

I also changed up the way the recipe was put together to simplify things a bit. You’re supposed to beat up the egg whites and mix them back in but mixing back in collapses the egg whites so I figure what’s the use. I know eggs cause things to rise.

So I put the four eggs in a bowl and beat them up. Surprisingly the eggs beat up pretty good with the yokes added so I melted the two handfuls of bitter sweet chocolate and cup of sugar and big stick of butter and added it to the beat eggs and beat it all up some more. Just to be safe I added about two teaspoons of baking soda and beat that in. I put the metal bowl I mixed it in into the instant pot and cooked it for 30 minutes, letting it release naturally for ten minutes.

I was surprised when I opened it up and looked in. It had rising almost to the top of the bowl and looked real good, I could hardly wait and sampled a bit off the top. Should be real good when it cools down a bit which I am now waiting for.

I get to pig out on it as the  more butter in my system the better the test. I won’t know if the butter is safe until later tonight, I sure hope it is.

This is a biggie

I’ll just note here that this is the first time in twenty years that I could actually do this test as before I was getting hit with so much corn so often I couldn’t tell what was getting me so it was impossible to do any testing with any accuracy, so this is a biggie for me in my quest to get away from corned stuff.

I’m thankful for my chickens

This is mostly all possible because of my corn free chickens that I can eat knowing for sure they are not corned. Because of them I don’t’ have to eat some of the other stuff to survive so slowly I’ve been able to get a lot of the corn out of my system so I’m able to test.

Nice rainy day at the river, much better than sitting in the house all day. And now I can really dig into that cake. :O)