We wanted the roof to dry out nicely today so we could do some sealing up of stuff so we started about one giving the sun time to do it’s job.

We need to seal up these two vent pipes. Tom cleaned most of the tar off these yesterday and used acetone on them as a final cleanup. 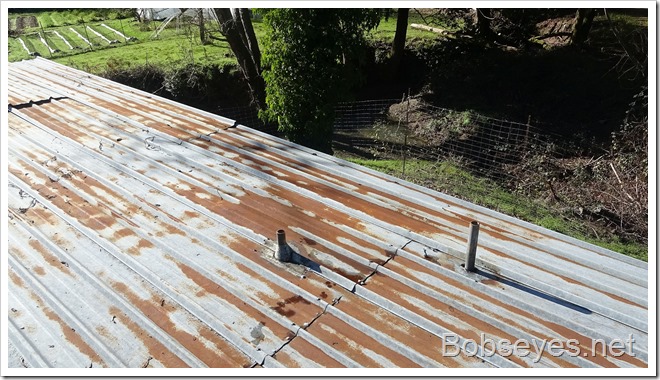 One of the vent pipes we will seal up with silicone. 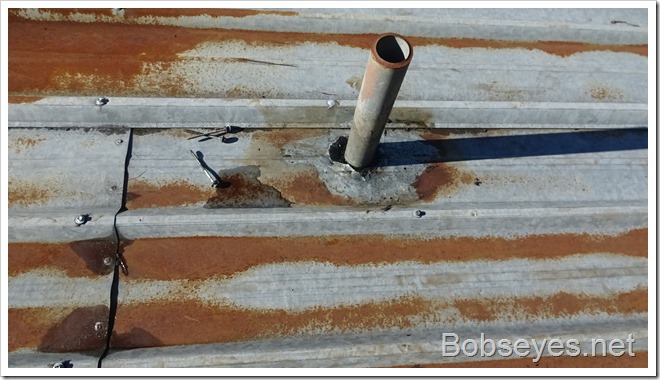 And the other one. Tom got most of the tar off so we should get a good seal with the silicone. I will only use GE silicone for this repair as not all silicone sealers are born the same. This one is tried and works good in my experience. Ready to heat up and seal up with silicone.

We also need to seal up the power pole and braces that Tom also prepped yesterday. 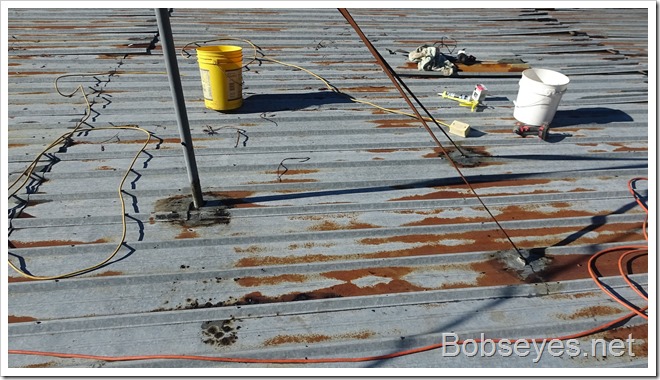 Here’s the power pole pipe that Tom cleaned up which we will silicone.

Tom was working on drying out the places we will seal with a hair dryer to  make sure they are dry and not wet or the silicone won’t seal.

While he was doing that I got this part screwed down  and finished off. 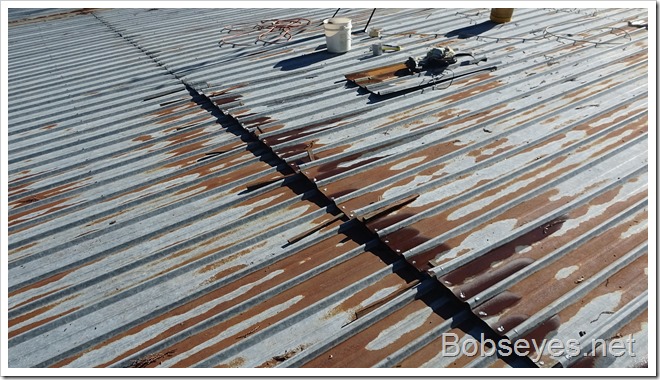 I helped Tom with the first one to demonstrate my technique. He applied a little more heat after we applied and smoothed out the silicone just to help it along in curing as the sun wasn’t going to be up for much longer today. This one is sealed and done. I’m sure it wont’ leak for a good long time. 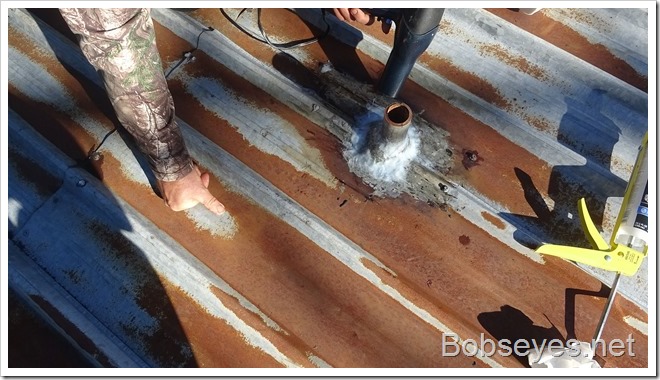 Here’s another view of the finished product. That’s not going to leak. 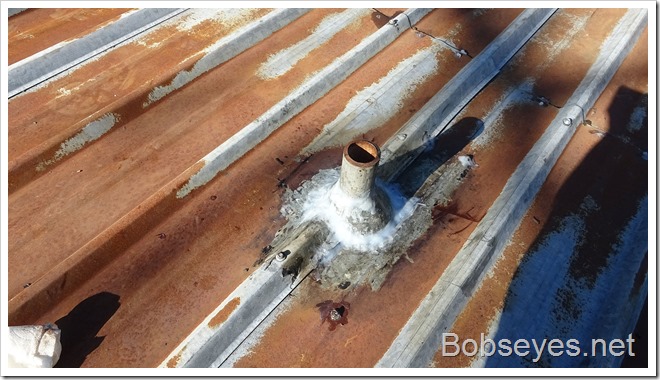 We worked on finishing up what we had started and got done just before the sun was about to go behind the hills to the west.

Tom said he’d bought some fresh crab and gave me one for dinner, Yummy.

Anyway I went back to my house and decided to go up into the hills for a ride, but the sun was so nice I sat here until it went behind the hill where I was going. 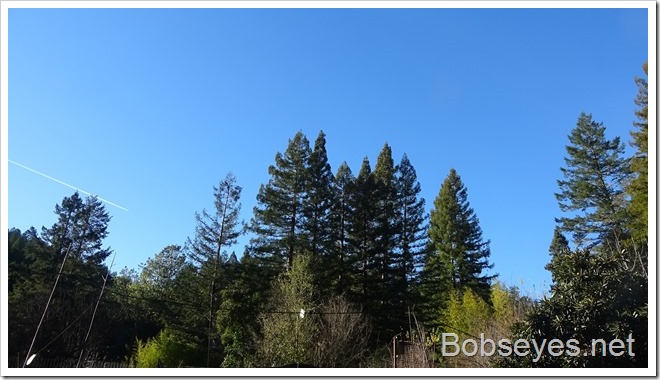 I decided to take the chainsaw so I gassed and oiled it and loaded it on my quad runner and I was off. I knew where some of the trees were that were blocking roads so I rode on up to where I thought the first one was here. Hummmm, it’s higher up and more of them than I remembered but I soon found out why. 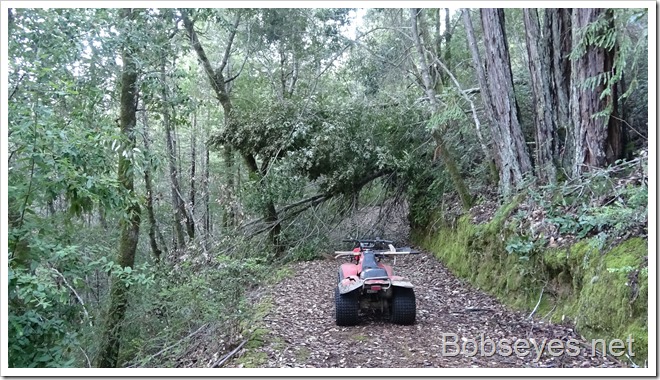 I was cutting those trees out of the way when I looked up the road and saw the tree I thought I was going to so after cleaning those up I rode up here and removed this one which was much easier than the ones way up high like that first set. 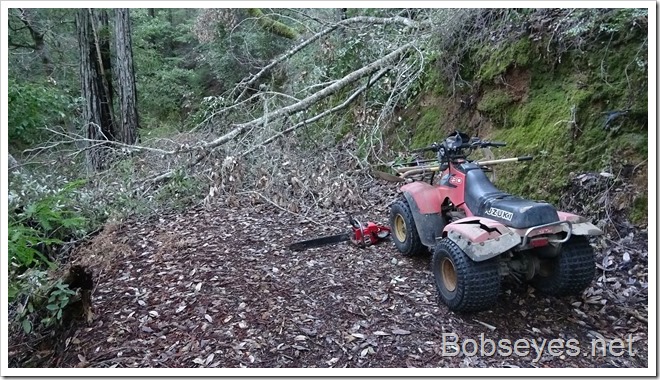 And I knew about this one, a fairly easy one to remove. 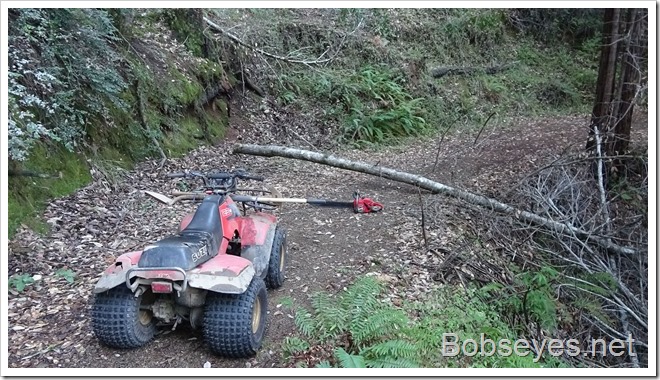 Next was this one that I knew about. I was getting pretty tired out by now. 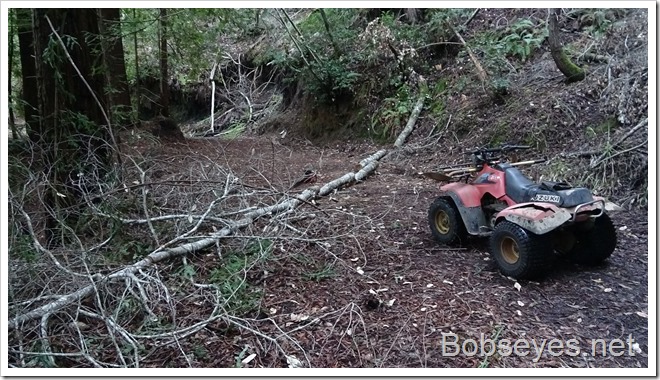 I decided that was enough trees as I was mostly out of energy and a ride up to top of the ridge would be nice so I headed that way,……..But.

I ran into all these trees at this intersection just below the ridge top so I thought I’d just cleanup enough to get by. 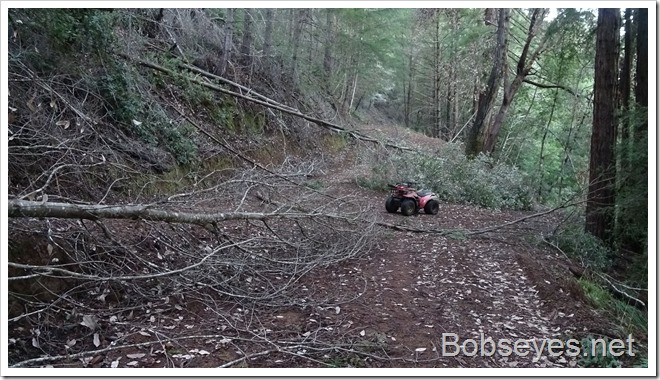 I started to clean these trees up and had most of it cut when the chainsaw died like it ran out of gas but I knew it didn’t’ but I did so I cleaned up most of those trees except the high stuff.

Sunset over the ocean

It was getting close to dark as I made it up to the ridge top. This was the sunset looking west.The Pacific ocean is just on the other side of those hill tops. 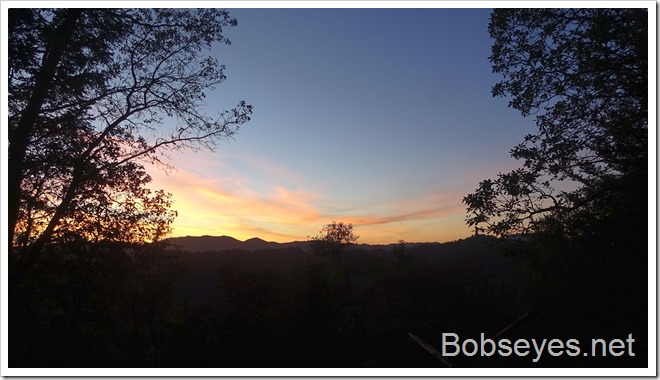 I hurried on home from there taking the shortest route to beat the dark.