I got up late today and I seemed to be worn out a bit so I started out the day puttering around the yard.

I just finished welding it up and am letting it cool down a bit before putting it into use. 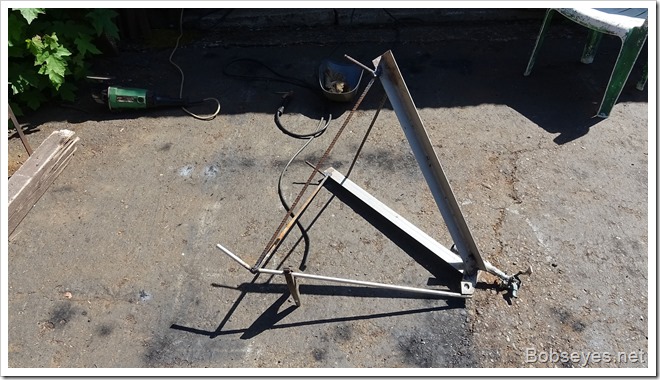 After a bit I hooked a water hose to  the sprinkler and put it to work watering this field. 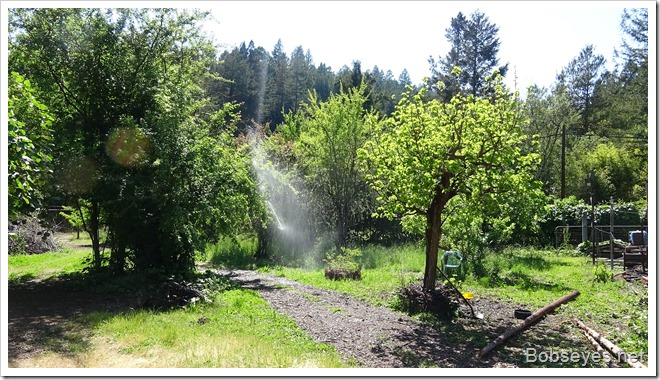 After some more puttering around I was looking at the new little pen I added yesterday and was thinking I should of made it bigger like around the side where the stick thing is. 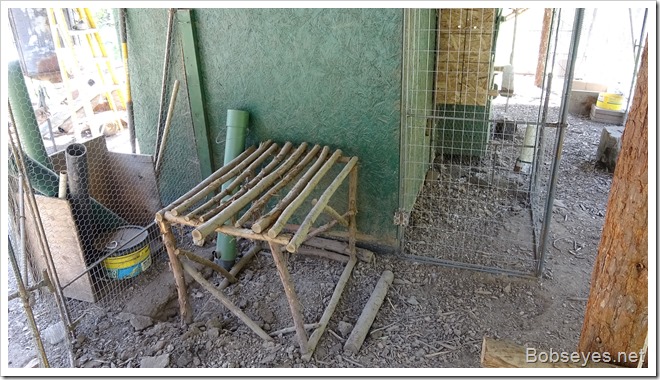 Since all the pens I’ve made are out of rebar and are panels it was easy to cut a few wires and bring the gate back out to add some to it. 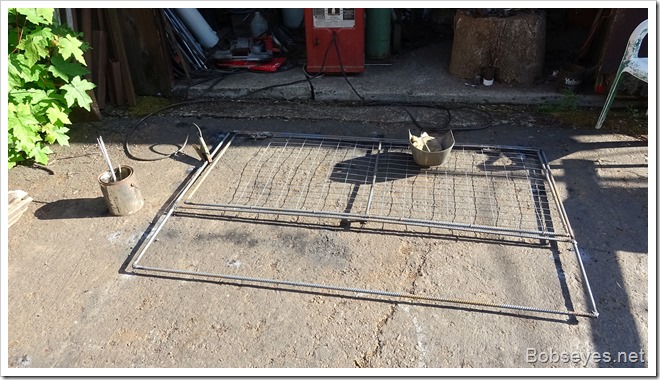 I made one other panel and installed them in the chicken pen. It’s the part on the right behind the white oyster shell feeder. 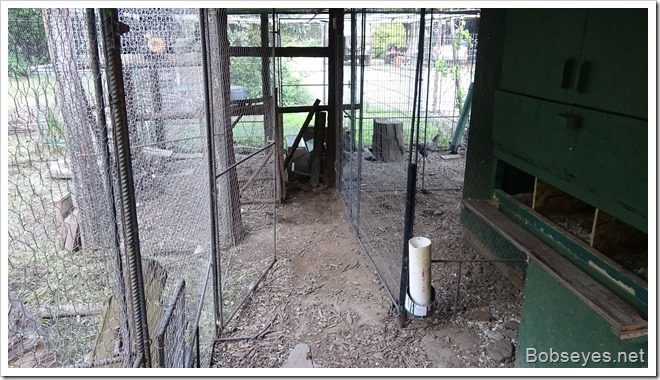 Here it is from the other angle cleaned up a bit. 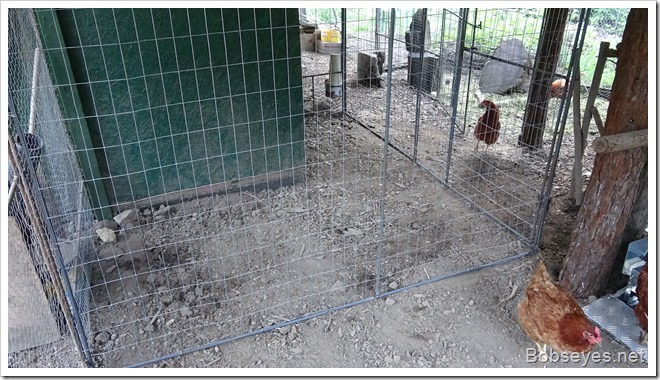 I plan to move the momma hen and her little peeps into it tonight so they’ll have a better home.

I was watching this trap I got from my brother on the video in the chicken coop and watched two big rats just step over the trigger on the bottom and grab the peanuts and step back over and take off so I though a little modification would help out a bit to make it more difficult to just step over the tray.

Here’s the trap and you can see the little tray they step over on the bottom. 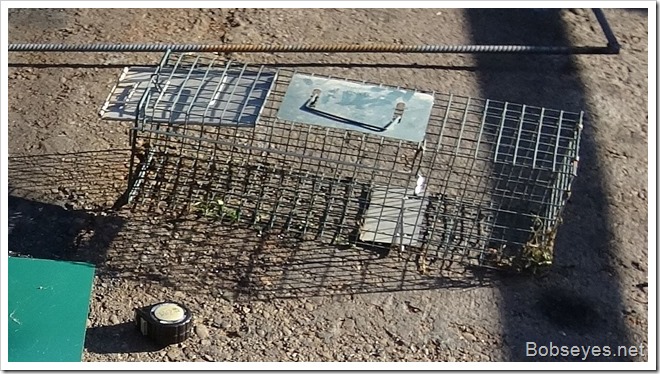 I needed a small piece of sheet metal and after looking around to see what I had I cut one out of this piece of roofing. I need the little piece there. 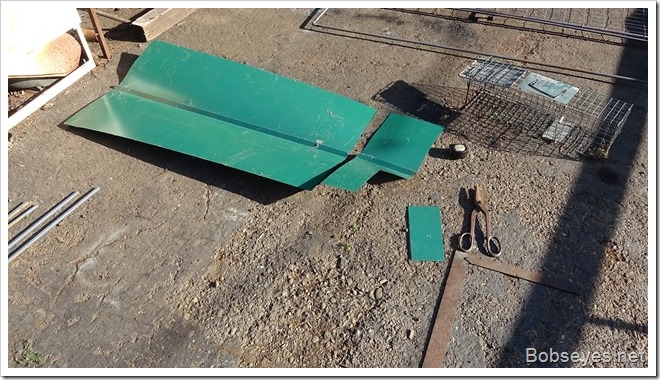 I cut this out and formed it into this little part. 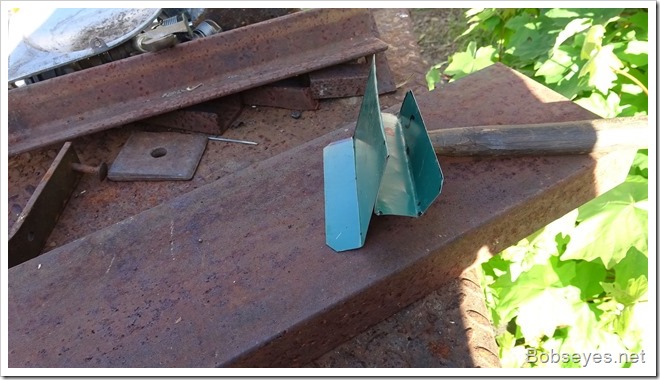 I was going to pop rivet it onto the tray but at the last moment decided screws would be easier to deal with if I wanted to change it later so I got the drill out and drilled some holes and fastened the part on the tray using two sheet metal screws.

Here’s what the new part looks like mounted on the tray. It will make it  much harder to just step over the tray. 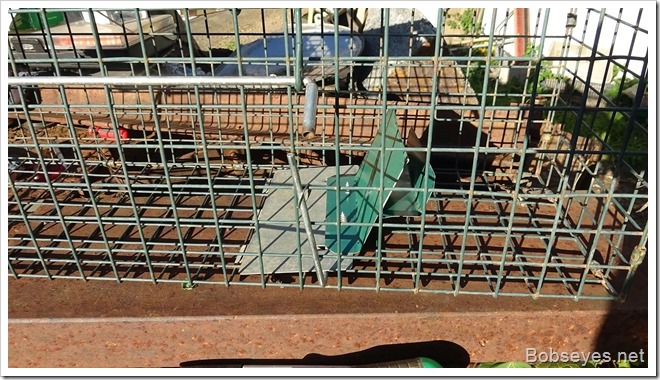 It’s the body not the head

I’ve always thought that if a rat could get it’s head through something it could pass but after watching one stick it’s head through the trap’s one inch squares and not being able to get through I can now see it’s there big body that stops them not their head.

Around dark I moved the momma hen and her peeps and all her stuff into the new pen area while they were in their nesting box and all seemed to go well.

I also set the rat trap in the chicken coop so I can watch it on my video camera. With the extra wait on the trigger tray it was a bit hard to set as it was real touchy. I may have to file on the trigger wires to make some flats if it gives me too much trouble setting it.  I used peanuts in the shell for bait.

That was it for me today, lot’s of puttering and a little work.