Some Work at the Boonville Cabin and a Surprised Bear

Going to the Boonville cabin

Wednesday night I left my house around seven and drove the two and a half hours to Boonville. It was just getting dark as I made it to the cabin, so I parked and called it a night.

The next morning I got up and took this picture of the cabin with my van parked back there in it’s spot. 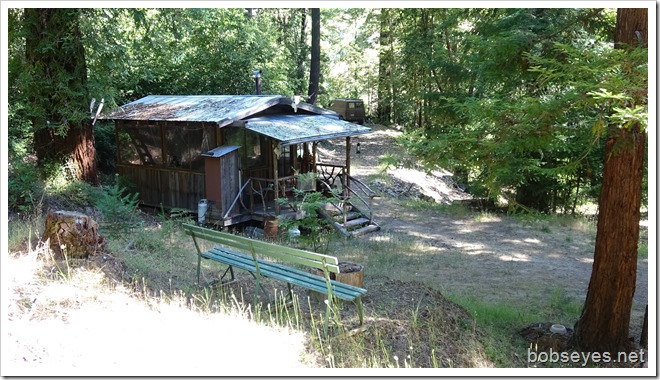 I noticed one of Marty’s big boxes of screws was overturned at the back of his cabin so I had a look.

Oh, oh, a bear had been here, what else did it do?

Marty was fortunate that the bear only broke his plastic sheeting and didn’t tear the whole place up.

Here’s the holes the bear put in the plastic window. He didn’t go through into the cabin. 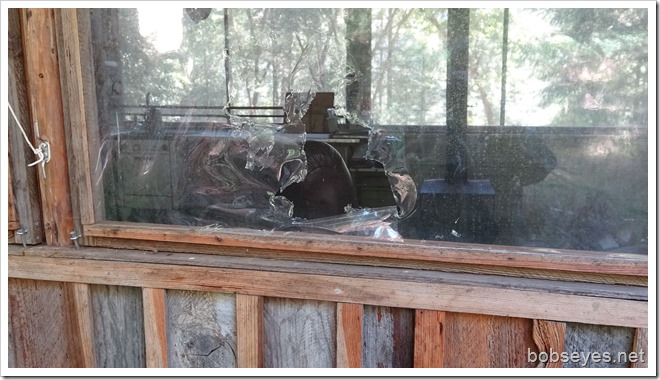 Marty knows not to leave any food stuffs in the cabin when no one is there, so that’s why the bear didn’t tear it all up trying to get to food.

The tent next door didn’t fair so well, the bear went through this side here. There was an empty garbage can in the tent so it went in to check it out. 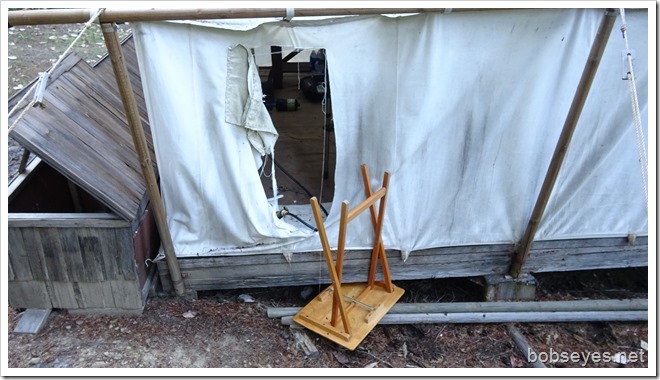 Nothing I could do about any of that. I grabbed some tools and walked up the hill to  dig a spring out.

On the way, I went by this main water pipe that had been chewed almost in two by a bear. 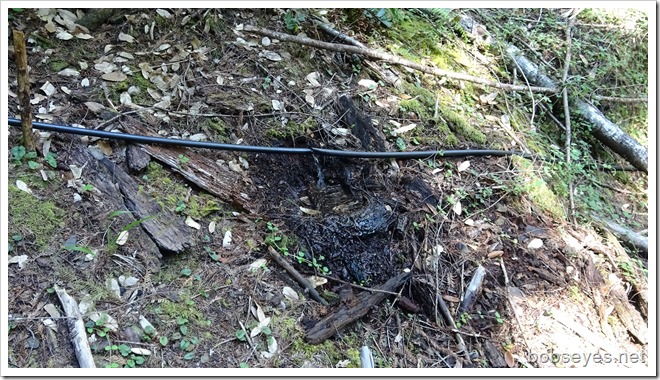 Need to dig up a spring

I stopped here for a short break at the bench before continuing on up the hill to the spring I want to dig up. 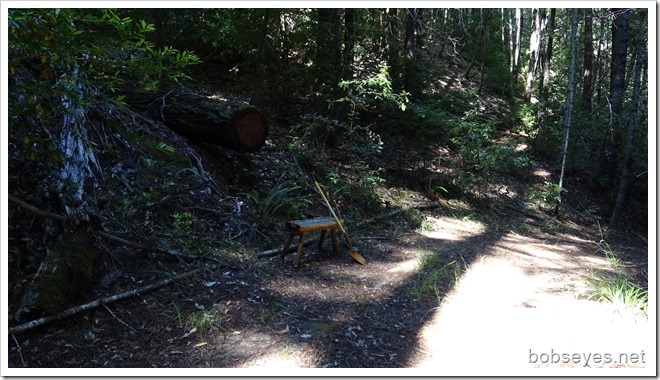 I got on the trail that leads to the spring and stopped at this bench on the way up for a short break. 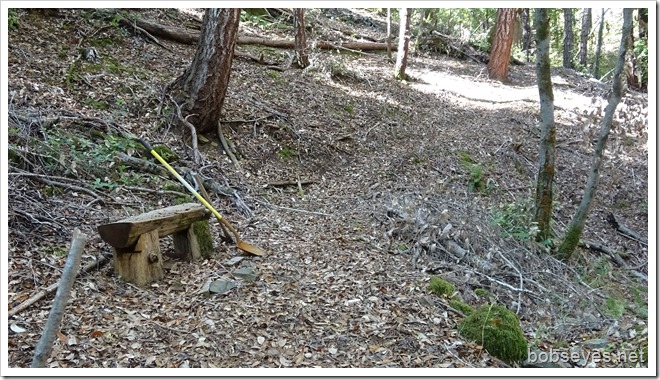 I made it to the spring and started removing these rocks to uncover the spring tap. 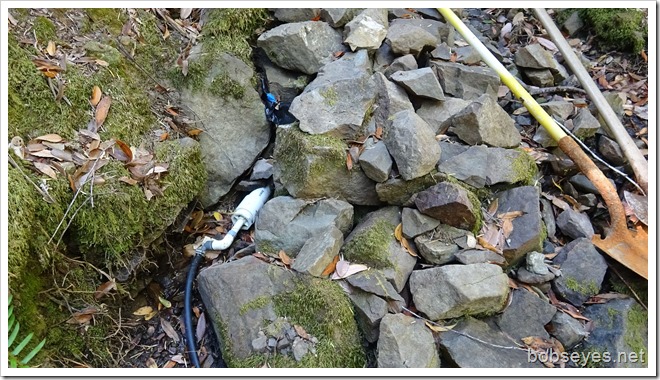 I got the spring tap uncovered. It was pretty clean. I cleaned it up some more and got all the water to flow into it. Now I needed some clay to pack around the pickup to finish this up so I can put it back together, but I don’t have any blue clay so I left it open hoping to find some clay somewhere. 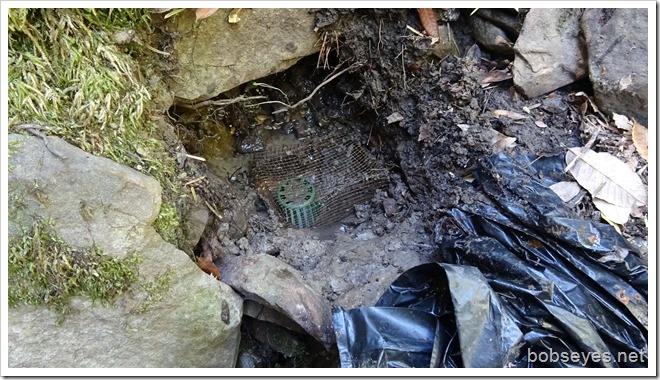 So I left the spring uncovered and headed back down the hill. The leak was flowing even more showing all the extra water I diverted into the spring tap. 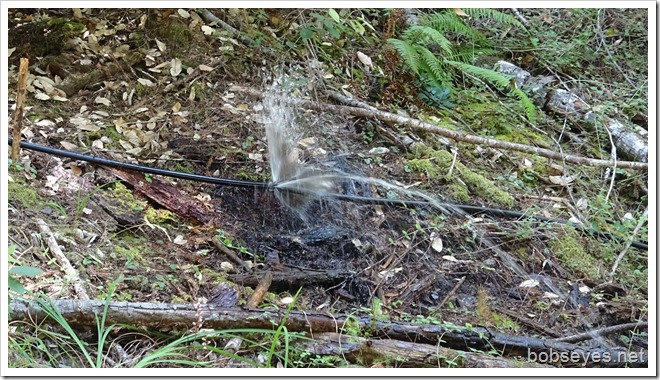 By now I was real tired out and it was a bit on the warm side so I took it easy for most of the rest of the day.

The bear catches my eyes

In the evening I was sitting my Marty’s cabin when I saw some movement outside.

It turned out to be the bear coming in to check what it thinks is a deserted camp. 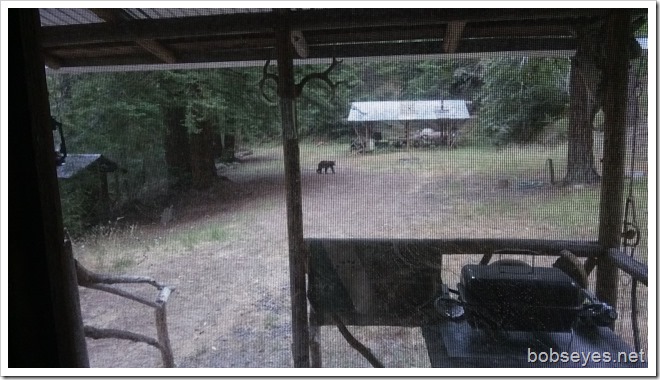 Chased that bear away

So I opened the door and started shouting at the bear  and chased it up the hill and it was gone. 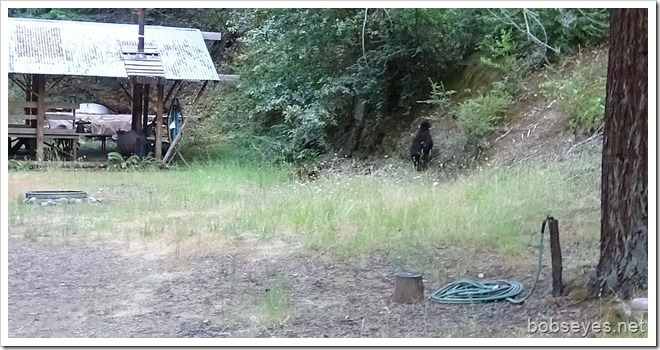 After that I was standing there thinking now what would I have done if that bear hadn’t run off like it was supposed to?

Today, I took it easy most of the day and just sat around and enjoyed the place. Marty and his wife Patti were supposed to come up sometime today, but I wasn’t sure when so I  just took it easy.

They arrived late in the afternoon and I told them about the bear haps around here.

After they put their stuff away in the cabin Marty hunted up some parts to repair the broken water main.

He found some parts he thought would fix it and we drove on up to the broken pipe to fix it.

Here’s Marty trying to cut the stiff plastic pipe with his knife. He finally gave up and went back to the cabin to get some loppers to do the job. 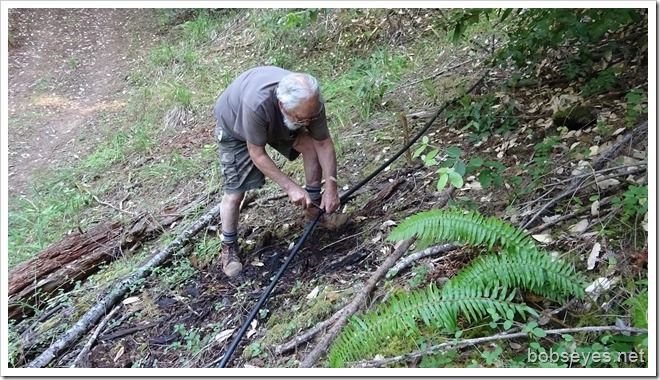 He was having a hard time getting the small piece of repair pipe stuck into the black pipe, so I helped him out and showed him my secret technique which worked well. 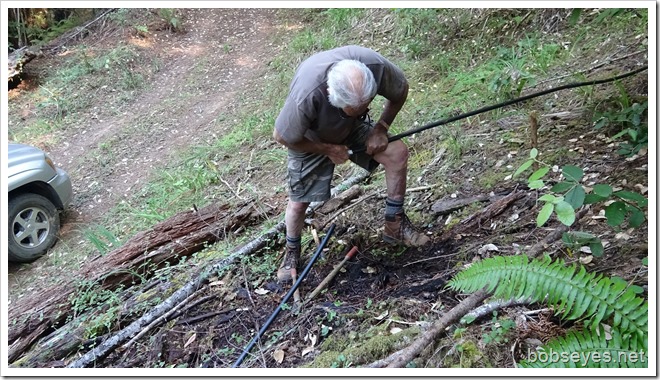 We went back up the hill and turned the water on at the tanks and checked the repair and all was good so we drove back down the hill to the cabin so we called it a day.