Some Visiting, an Eagle, Cormorants, a Dead Camera and a New Camera

Some visiting and some paddling

I got a late start today. Around one, I drove on down to Ray’s house and shot the bull with him and his wife for about an hour, then continued on to Jenner to kayak for the day.

The wind was down and the sun was out so it looked like it was going to be a nice day as I put my boat in the water and paddled across to Penny Island and decided to head down to the mouth area as it was going on high tide.

But before I got the the island someone back at the boat ramp hollered Bob which looked like John Sundberg, so I paddled back over and we shot the bull for an hour or so.

I left John and crossed over to the island.

Here I’m paddling down along the edge of Penny Island. 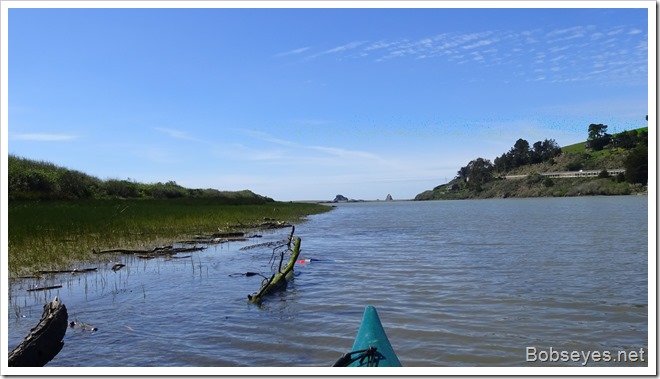 I saw a big bird eating something down on the bottom end of the island which turned out to be a bald headed eagle. It was eating a small fish I think. Some kayakers got too close and the eagle jumped into the air with it’s catch and flew off. 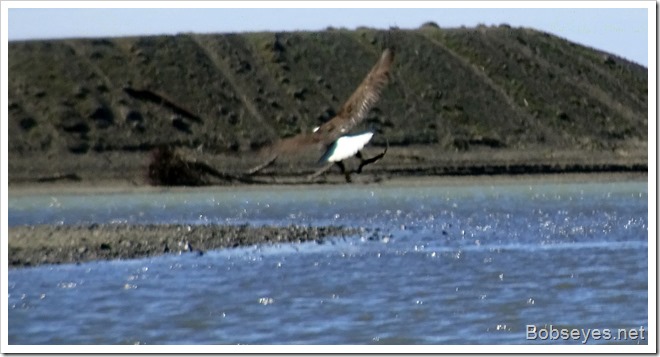 I went by John’s house to see if he was still alive and kicking after his heart operation. I didn’t find John around but his flowers were blooming nicely. 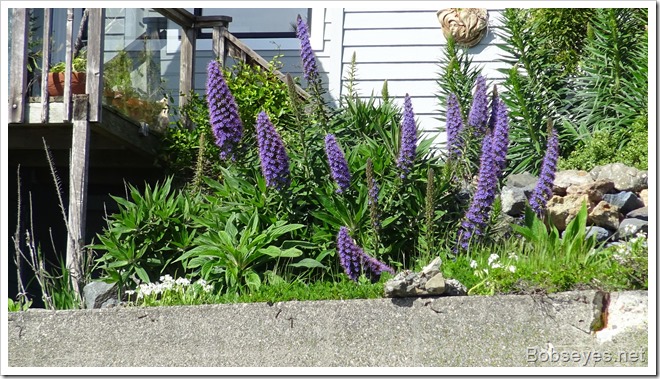 I paddled on past John’s house headed down to the river’s mouth up ahead by the big rocks. 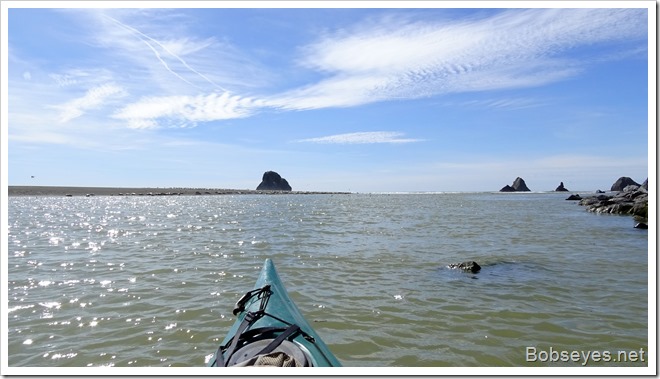 Lots of cormorants at the mouth

I passed by these cormorants again resting on the rocks. 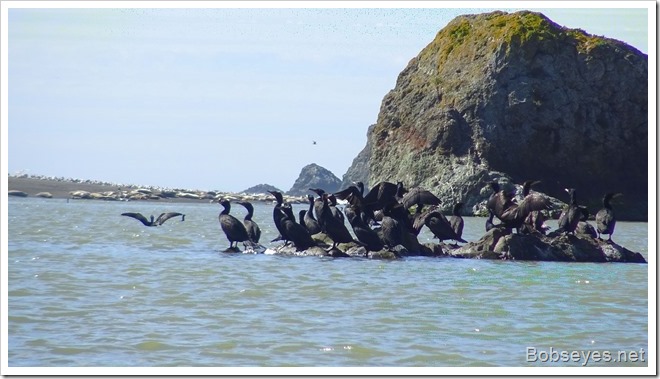 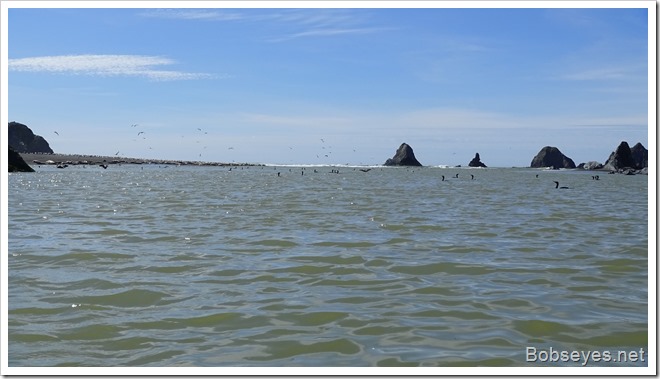 Of course the harbor seals were resting on the beach on the left side of the mouth as the ocean waves pounded in. 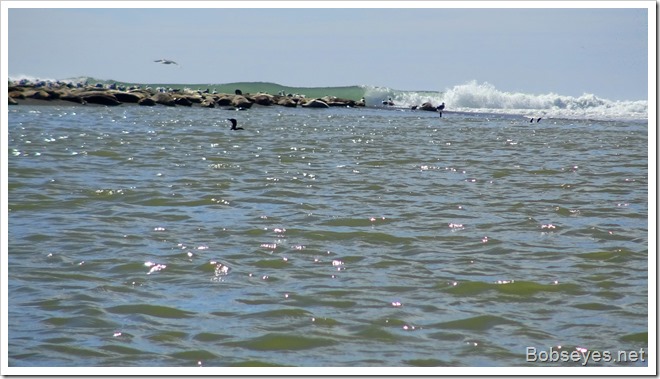 As I turned to paddle away I could see some cormorants surfacing with small fish and  swallowing them fast. I caught this one just before it got it down. 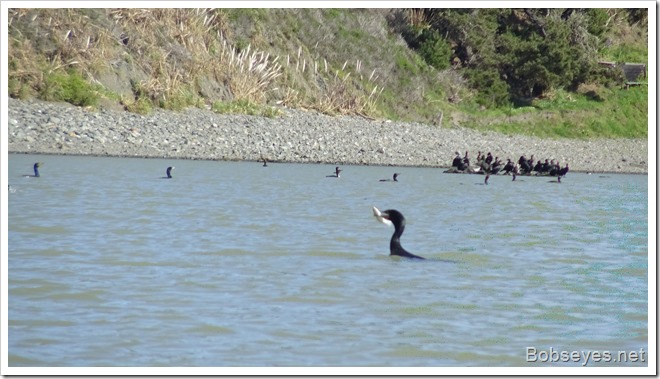 Why they call them Double Crested Cormorants

While I watched one eat it’s catch I noticed something I hadn’t noticed before. I always wondered why they called these cormorants double crested cormorants and today I found out why.

See this cormorant has double crests on it’s head. I think it must be in mating season as they don’t usually look like this one. This cormorant is facing away and you can see the two crests coming off it’s head one to each side. 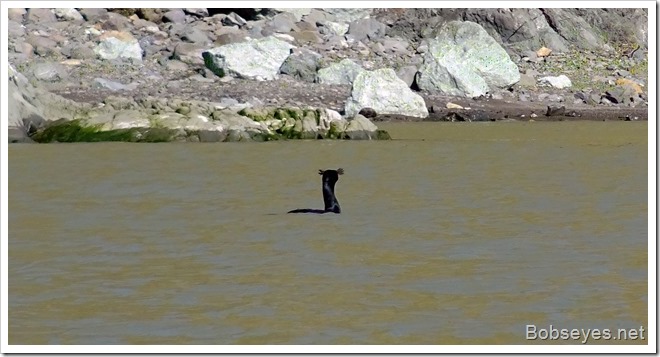 I started paddling back up the river along the island and went by this goose which seemed to be just taking it easy in the water. At least it didn’t honk at me. 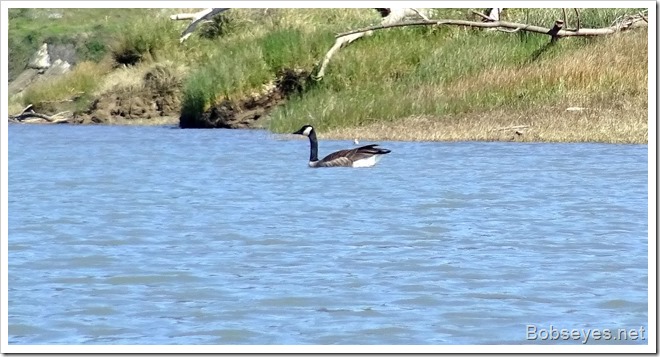 I continued paddling up the river about a mile taking my time and enjoying the day stopping here and there along the way.

A little walk at Eagle’s Landing

I made it to what I call Eagle’s landing and went to shore to check on a land slide Ray had told me about that had slid across the Poison Oak Alley Trail, so I thought I’d check it out. 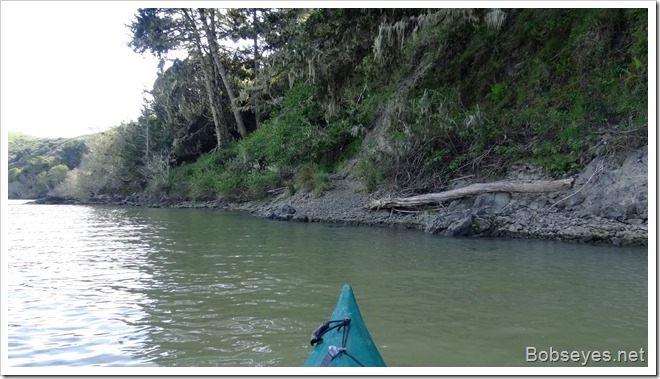 And my camera died on me

I landed and walked down the trail to check it out. A big mud slide had come down and somewhat blocked the trail, but not too bad. I was taking some pictures of the slide area when my camera died and gave me an error code, so no pics.

But I got it going again

When I got back to my boat I played with the camera a little trying this and that and removed the battery and put it a back and it turned on with a different error code that eventually went away. The camera has been showing signs of being dropped one too many times so I had ordered a new one to replace this one about a week ago and it was supposed to be delivered today.

I think the error code was a bad battery connection as after I reset the battery it started to work again and no error codes, but it’s still has had problems auto focusing taking a long time and green lines in the sky.

Anyway, I crossed over the river to go down the other side to check out any birds or critters that might be over on that side. I heard the turkeys down that way earlier and I hadn’t seen them this spring yet.

I didn’t find the turkeys, but I did go by these steers munching grass along the river bank. 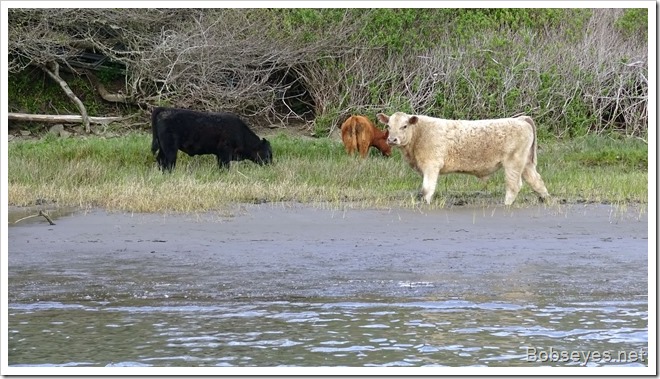 Didn’t stay around for the sunset

It was about an hour before sunset as I headed in. I decided not to wait around for the sunset although I could see by all the nice clouds in the sky it would likely be a real nice sunset, but this will have to do. 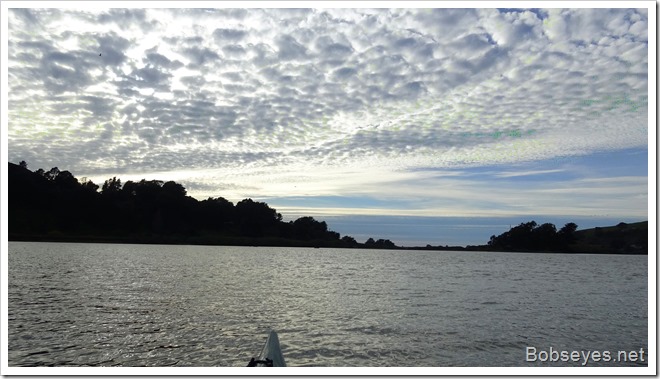 My new camera arrived as promised

I headed on in to the boat ramp and went on home for the day. My new camera was waiting inside a box just inside my gate, so I’m set. The new camera is an upgrade of the one I had and has 20x on the lens instead of 10x like the old one, so that will help. Getting a new video camera is sorta like it used to be getting a new computer as the video cameras are still improving. I feel it’s better to put money into a new one instead of putting it into fixing an old one as the upgrades are worth it. It’s a Sony Handycam FDR AX53.

7 Responses to Some Visiting, an Eagle, Cormorants, a Dead Camera and a New Camera